11:26 both ruffled their feather in turns. then Raimis pulled Milda's tail feathers.

Milda came down to the nest. her feet are quite muddy.

11:28 Milda jumped to the right branch. then Raimis got up to the top balcony. he took some hay even up there.

ame wrote:11:17 it's Raimis. he returned to the nest and then Milda arrived. they started nest work.

They didn't see the poop she left??

maybe Raimis brought the big bunch of hay in order to cover the poop.

both are preening on their branches although both are relatively dry. they have been in a shelter last night unlike the strange﻿ girl who was soaking wet. they know were to hide in bad weather.

11:32 Milda flew away from the right branch.


11:33 she brought a short but thick stick.
edit: this was a green spruce twig, too!

Again on the poor right branch? go look for new branches, you'll need this branch for your kids!!

11:34 Raimis brough a nice stick. he then worked on the nest...
he had a funny hair style today: the back of his neck and the top of his head were wet and therefore looked darker than the rest of his head. he reminded a coal tit to me, or a blackcap.

there's something funny going on in the end of this recording... well, never mind.

11:37 he jumped to the left branch and pulled Milda's tail feathers again. The days have become longer and Milda begins to look more charming in his eyes.

11:40 Raimis flew out and Milda right after him.


Milda's tail was again within inches from Raimis' beak. i can't say if he was tempted or not but anyway he didn't pull her tail any more.

13:58 he flew away but was followed by another eagle? who flew from left to right on the forest
Top

Is a big eaglet with

you saw it right, it was a adult eagle... poor spotty Babie 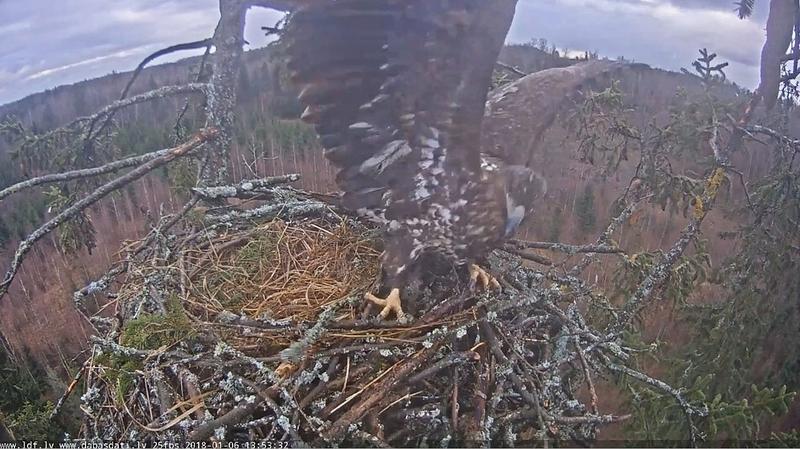 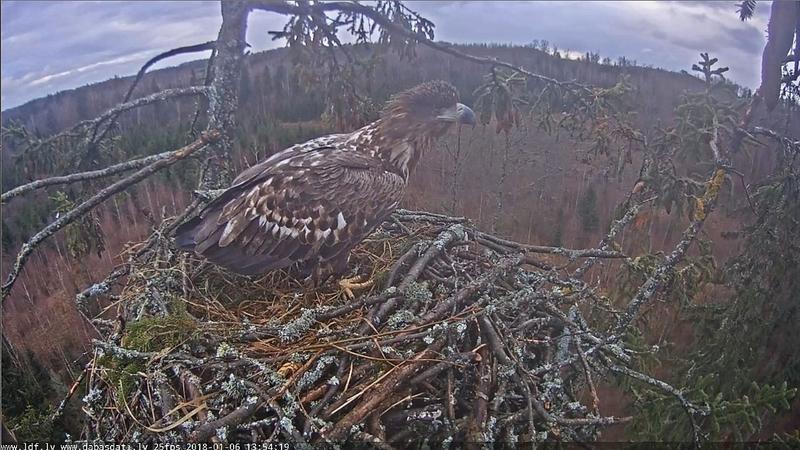 Abigyl wrote:13:55 He likes the right branch like the boss !! 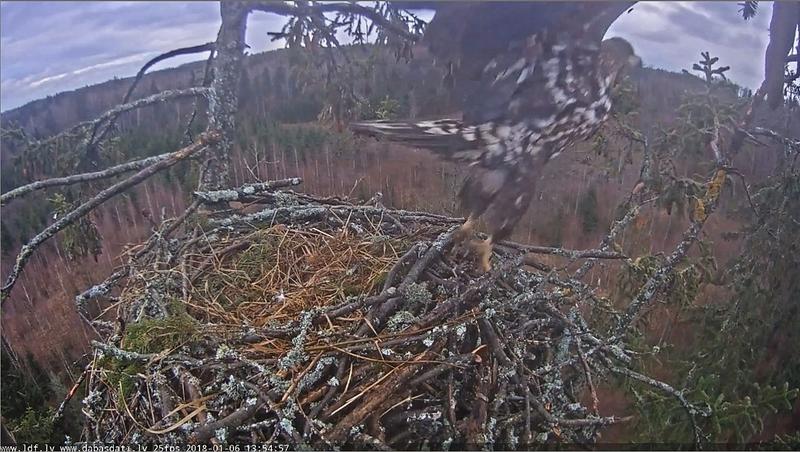 The video. The eaglet flew away, scared by an adult. In the end of the video, the eaglet flew from the right to the left and a raven is singing a sad song

it seems that the season has indeed begun, with two strange eagles in one day and day isn't over yet.

then a raven came to laugh at her (i think it was a girl).
edit: later i thought this might be a boy.


13:58 the youngster saw something in the sky on the left side, something that made her uneasy...
she flew away to the right and at the same time an adult eagle followed her. after a short while an eagle flew from the right over the meadow and a little later another bird followed the first. i think the adult was either Raimis or Milda who came to show the way out of the forest.

This one was too young for me

There was no need to look for a ring, I knew it's not our baby


Raimis worked on the nest... the top of his head was still darker than normally. blackcap.


16:32 Milda got up to the top branch. she is shaking her tail feathers in front of Raimis.... almost tickles his beak.

Raimis could not resist it, he had to pull her tail.

Milda turned around... and flew away. Raimis followed her.


I think Raimis and Milda are here

8:13 the light getting better.. looks like Raimis in the nest?
8:14 jumps at the left branch and is cleanig his beak
8:17 Raimis rubs his tail on the nest bottom
8:20 Raimis went on the right branch.. Milda fell into the nest
Top