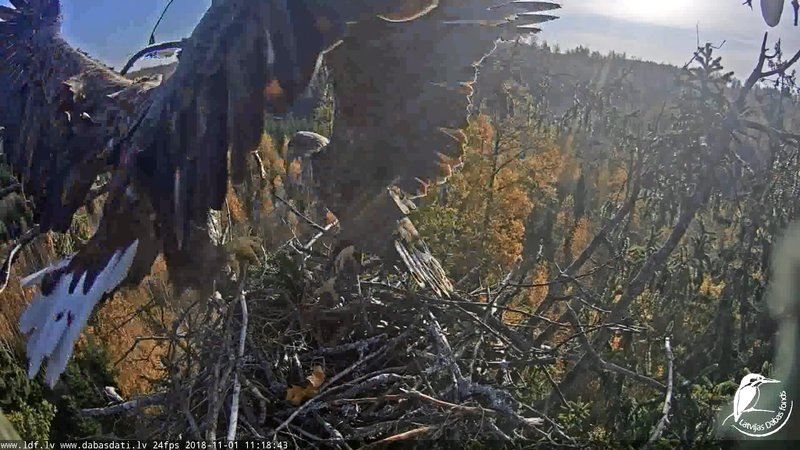 then Milda worked with sticks...

11:20 Raimis flew by the nest and then brought a stick. they worked together..
then some ravens came to greet them. krook-krook-krook...
R & M were not pleased. they called at them.

11:35 Raimis brought a stick. he worked... Milda was sitting on the top branch.

11:44 Milda brought a stick and Raimis flew out. 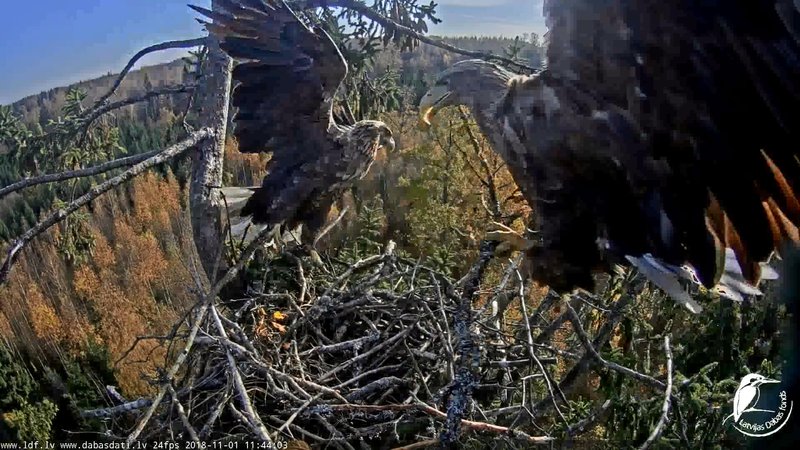 Milda worked on the nest...

11:46 Milda was looking to the right... then there was a loud snap!
soon a big bird flew by from the the right to the left. it was perhaps an eagle.

Judging by heavy breath, it is Milda.

The last video in this message gives an error message.

I also instead of events of day have inserted other video.

highlander wrote: ↑
November 1st, 2018, 1:30 pm
... The left front side of the nest, partially invisible to us, looks like a French balcony, hangs in the air, completely without the support of a branch or a stable connecting stick between the branches. ...

the eagles don't seem to have the same concept of building a stable construction as we humans have. it has seemed to me that they have only one idea: to bring stick after stick after stick after twig... in the beginning about 95 % of the sticks dropped. then after a while a critical mass of sticks was achieved and the new sticks started to stay on the tree. the eagles didn't change the way in which they worked.

then the eagles just continued bringing sticks and they stayed. they still don't seem to have a better plan about where to place the sticks. the nest just became a disorderly heap of sticks and branches. i think that the friction holds the branches and sticks together, that's all.

in the late summer i surprised to see how long the old nest stuck to the tree even though the eaglets were doing their best trying to pull sticks out of it. the nest didn't slide down and drop even though i expected to do that any day. the sticks were a tangled mess which held to the tree. i think that the new nest is being built on the same 'principle'.

The last video in this message gives an error message.

I also instead of events of day have inserted other video.

one character was missing in the code, sorry!
now it should work.
thank you for letting me know!

Thank you for videos and reporting!

it's cloudy and somewhat windy today.

do you happen to have original unedited video of this? i can't read the time stamp...

is this event on the longer video?
Top

is this event on the longer video?

Yes, at such combination of shots YouTube very strongly reduces quality. It is no more 480p even if initially there were 1080p.
The second time YouTube doesn't allow to upload this video though earlier it was possible. They have changed something again.

Sonchik wrote: ↑
November 2nd, 2018, 12:38 pm
Yes, at such combination of shots YouTube very strongly reduces quality. It is no more 480p even if initially there were 1080p.
The second time YouTube doesn't allow to upload this video though earlier it was possible. They have changed something again.

I will cut off the necessary piece of video on the computer closer by the night. Before evening time the computer doesn't maintain such loading, just stops cutting process.
But I see time mark on 480p both on the computer and on phone.
It at 11:52:41 and 12:37:41

yesterday my recording had failed a minute before the eagle flew to the top, at 11:51:33.

how do you make your recordings? do you record the delayed stream with some screen recorder? what program do you use?
Top

yesterday my recording had failed a minute before the eagle flew to the top, at 11:51:33.

At me too. It has been written "buffering of 0%", the camera means stopped though for 1 second.

how do you make your recordings? do you record the delayed stream with some screen recorder? what program do you use?

I usually put on record in the morning. Earlier I exposed in the settings "divide record into pieces of 500 MB" then have ceased. Just I include record and sometimes I look as it goes. If in a shot there is nobody - switch off and again I include record. If record breaks and something occurred in a shot, then I make entry from the screen. But the computer doesn't have enough forces, the youtube twists a white wheel on quality of 1080p all the time. It is necessary to reduce quality to 720p. I have PotPlayer.
Excuse my (English) GT
LDF Jūras ērglis Haliaeetus albicilla 2019 https://www.youtube.com/playlist?list=P ... iOqZ5js4-T
Construction of a new nest https://www.youtube.com/playlist?list=P ... 0cci-Ytyhn
total https://www.youtube.com/channel/UCRffmO ... subscriber
Top

ok Sonchik, so you basically do the same thing as i do. also i use Potplayer. i put the recording on in the morning or let it roll all the time in the light time of the year. i split files at every hour. that is easier for me to grasp. using 500 Mbytes make videos that last about half an hour. i use full 1080p quality because my internet connection usually allows that. sometimes (usually at least once or twice a day) the recording stops. then i have to record from delayed stream afterwards if i notice the break in time. sometimes i'm away too long and then i miss something interesting. it is so good to have someone else recording, too.

Where are they today? Shopping after Halloween ?

Often. My once a week stops. And today two times have stopped. Probably the camera still works with failures. I also have watched video, it stammers.
Wrote in a chat that races were on a track. In such days eagles don't show activity.
Видео всё равно такое же получилось...


There is video of flying away. I have already included record by that moment.

That was funny this morning. I could just write that Raimis came in, then the batteries in my keyboard were empty. I had to go and buy new ones

7:43 Raimis is waiting for Milda 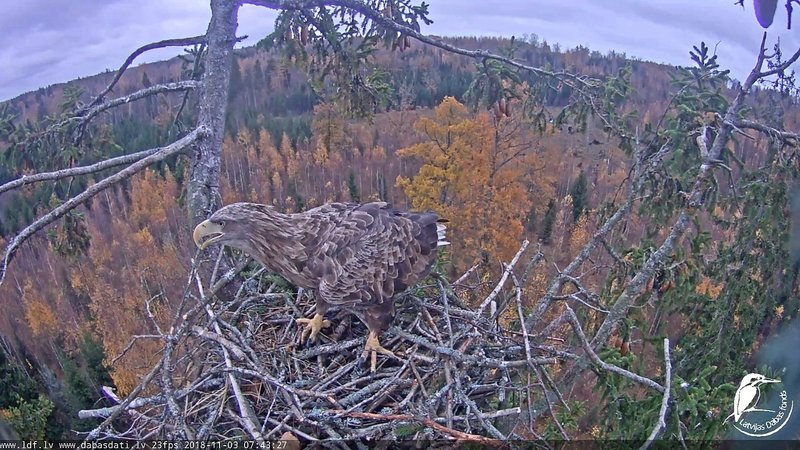 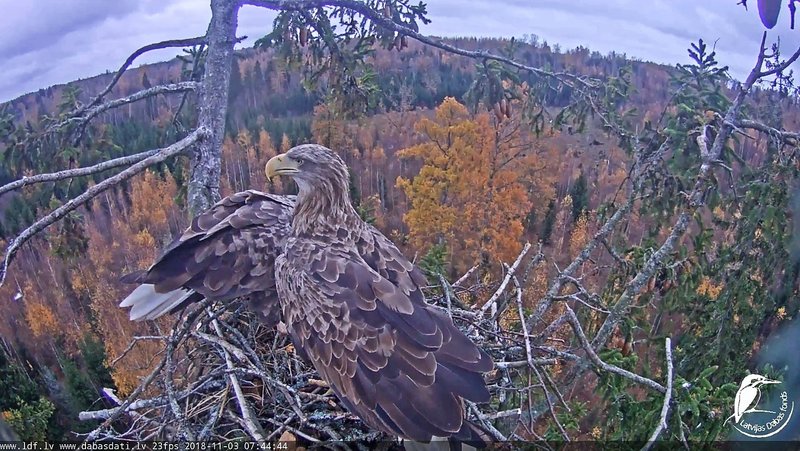 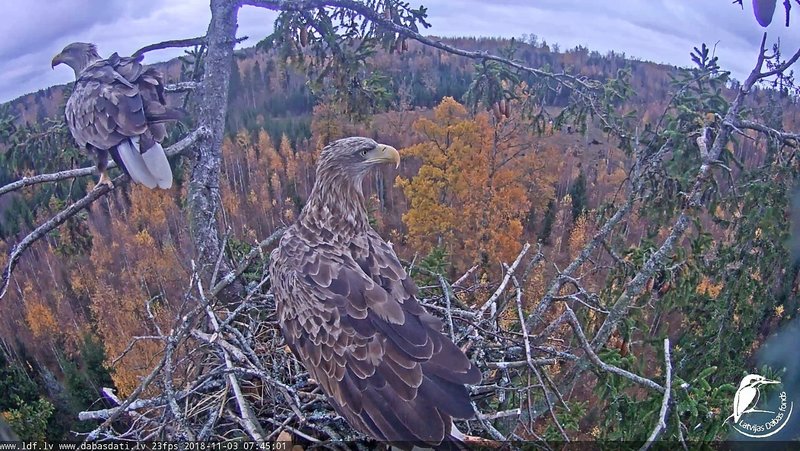 edit: i have seen that Liz and Sonchik have made videos but i made clips of the events today, too. i'll post them here in time order.
7:31 two eagles flew by... then Raimis landed on the top branch. the other eagle was probably Milda who continued on.
https://youtu.be/67cn55h758w

7:36 Raimis jumped to the nest and then Milda landed on the nest with a stick.
they worked together... Milda gave a kiss to Raimis who didn't startle much this time.
then Milda went to the left branch.