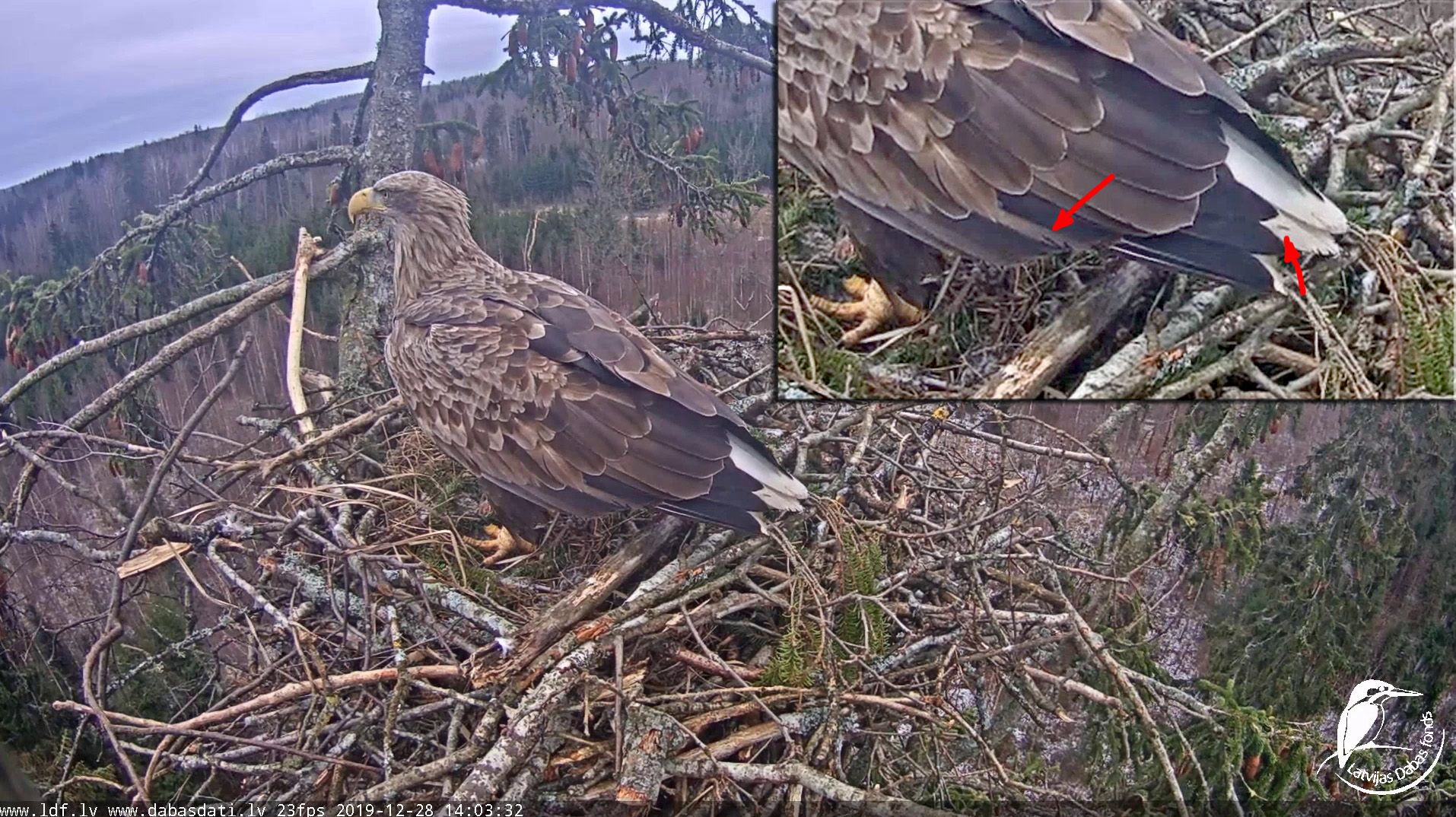 thank you for the picture Nordri!
i hope that we shall not meet this bird again.

or actually i think that Milda and Raimis do not wish to meet this bird again.

The strange eagle has thick legs and a very big beak. It is an almost adult female (for me) . And I think Milda chased her away.

dark spot on the beak 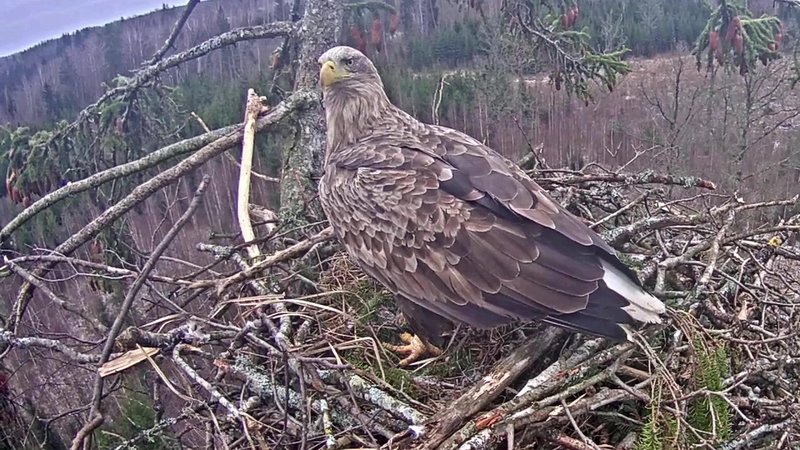 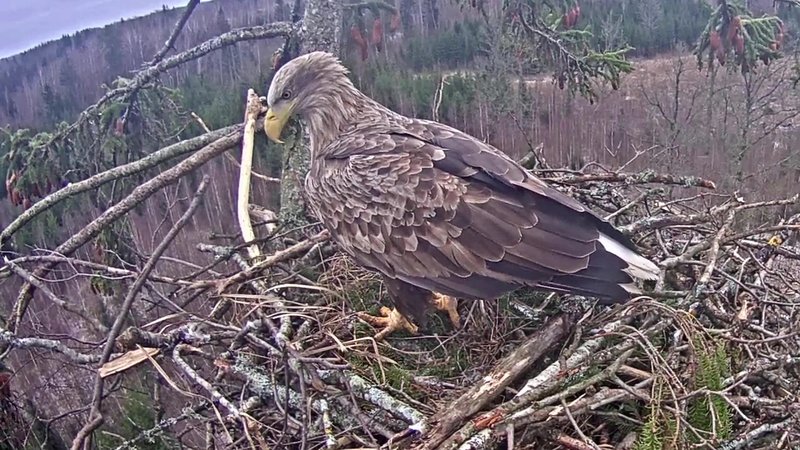 i thought that the stranger was a male but it's possible that it was a female.

anyway it was a male who called when the eagle was chasing the other away. that's why i thought the stranger was a male, too.
thanks for the video!

it's dark and soon nothing can be seen. the wind is sighing heavily in the forest...

What strange voice. Our eagles don't talk like that. Possibly, it is the stranger.

I made a video of a stranger and tracking flying eagles.

The stranger was very round, looked like a female.
Top

Nothing has happened so far.
Soon we will see the first fish at the nest. I am curious to see how Raimis behaves 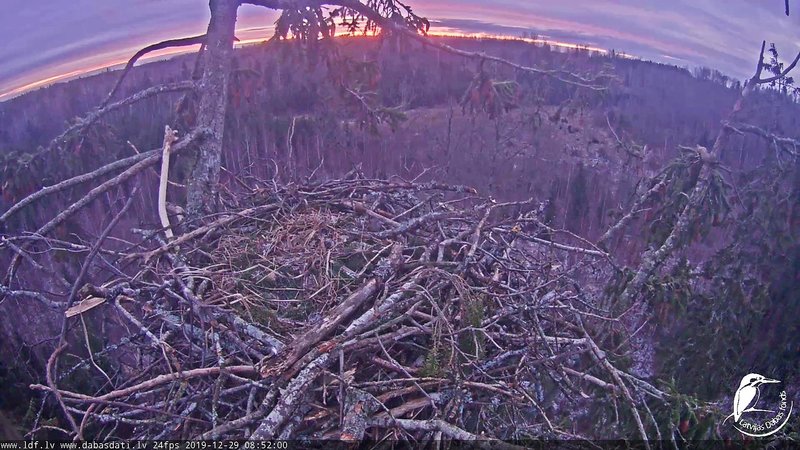 9:05 a black woodpecker is calling 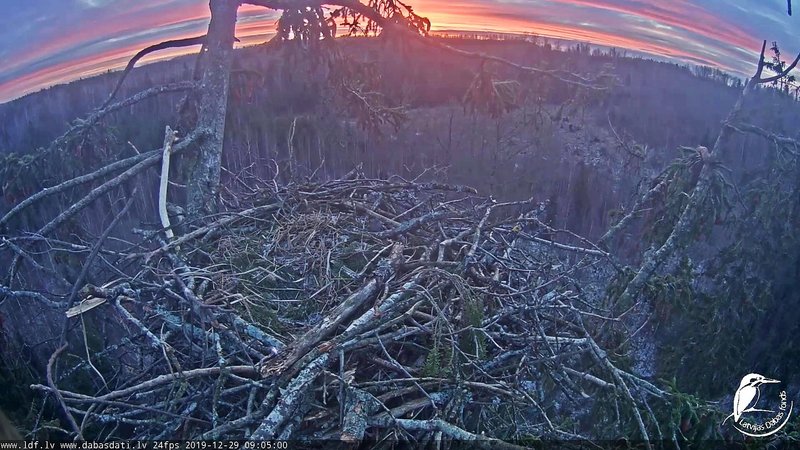 9:11:06 you can hear the train drive by. chuckchuck chuckchuck
Top

anyway it was a male who called when the eagle was chasing the other away. that's why i thought the stranger was a male, too.
thanks for the video!

I thought the male was calling from the left. The eagle that chased the other didn't call? So I thought Milda was chasing a female. I agree, Raimis would chase away a male.
Top

9:22 dog barking can be heard
9:50 snowflakes. A nuthatch called close to the nest, then a great tit
Top

I thought the male was calling from the left. The eagle that chased the other didn't call? So I thought Milda was chasing a female. I agree, Raimis would chase away a male.

good morning!
also i had to take coffee first and then watch the video of the chase again to see & hear again (and better) what happened.

it was a male voice who called. i think it was Raimis. a strange male would not announce his presence like that. i would think that Raimis would get upset if he saw another male in his territory.
it is, however, difficult to hear if Raimis is stable in a tree or flying around, but i believe that Raimis was the chaser and the stranger the chased eagle.

14:15 (almost exact) there were more male's calls. at the same time i think i heard also few female's calls but i'm not sure of this.

do you hear a female voice there together with the male?
Milda might have encouraged Raimis, but usually the eagles don't get mixed up with the their partner's fights as we saw a few years ago.

the forum is sticky again. i had to try many times and a long time to get in. 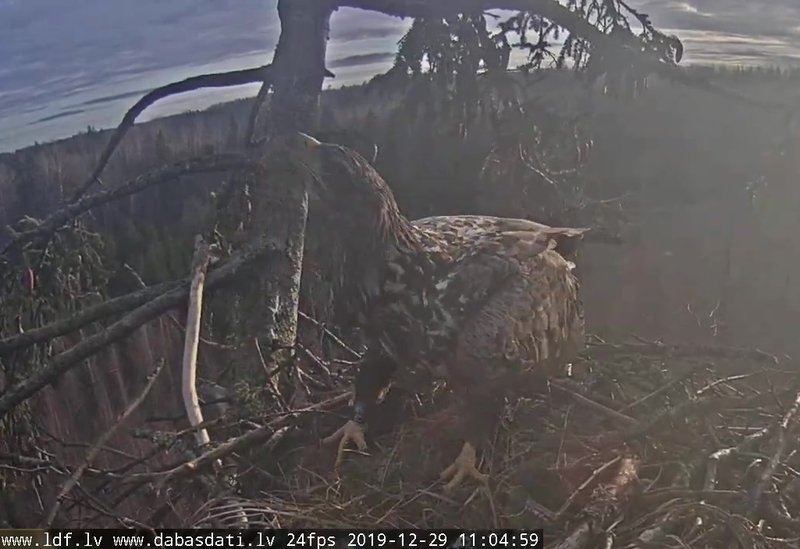 she has a blue&black Latvian ring!
H485 it reads i think. 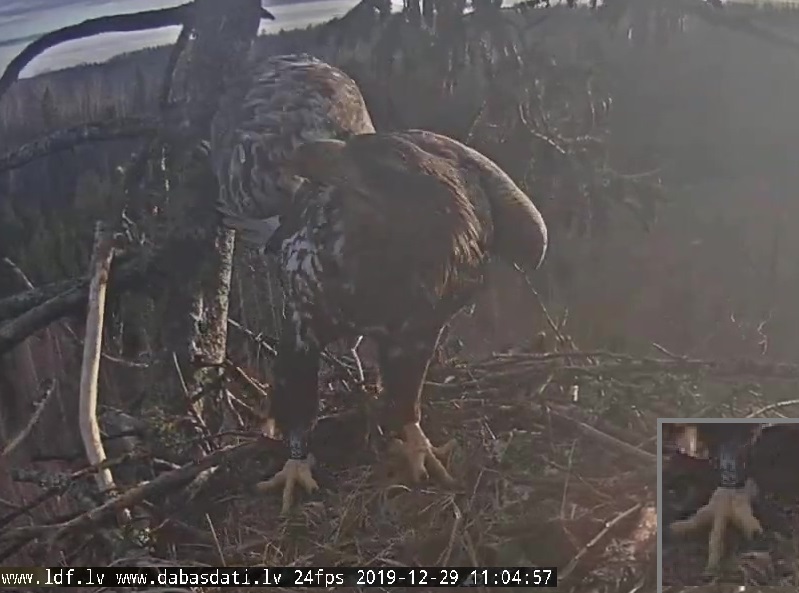 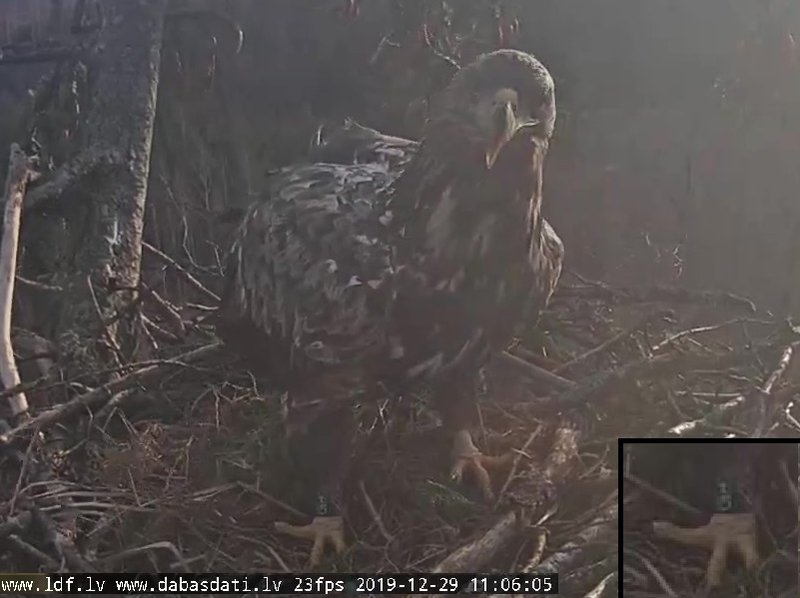 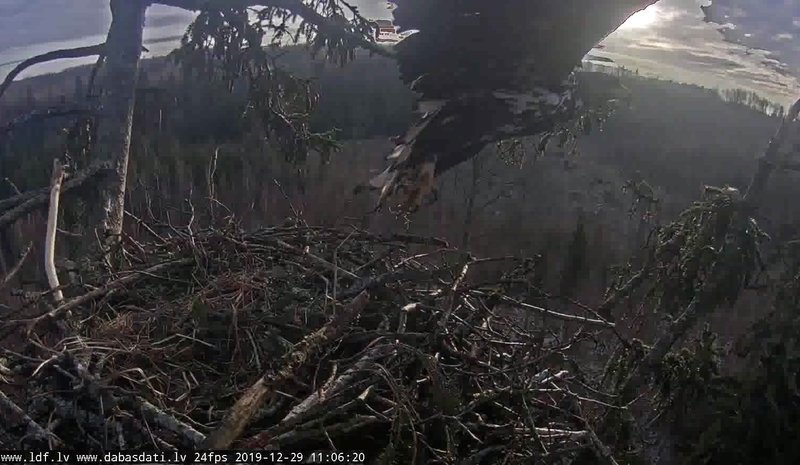 a few seconds later her friend flew out after her.

11:07:00 two eagles flow together in the top left corner.
so she flew out and the friend, too.
https://youtu.be/TAT9ImbdITs

Jānis wrote in DDF about the origin of this bird:

GT'ed:
" Hello!
Thanks for your attention! Yes, it is a Latvian origin bird, H485, I ring it as a baby in the nest 24.05.2017. Near Lake Engure."
Lake Engure is situated in Courland near the coast of the Riga bay, not far from Durbe (about 120 km distance as the crow or an eagle flies


13:06 a male eagle called. this didn't sound like a 'happy' call.
after the eagle crows and ravens called.


mega2 has searched the archive and found out that Lat-H485 visited us already in her first Autumn, on Oct 27 2017. she was much darker then.

14:51:15 more unhappy male's calls. is Raimis trying to chase someone? this time i have not heard ravens or crows. calling. the wind is hard and loud.

Good afternoon!
Thank you all for the messages! Today they are very difficult to write. 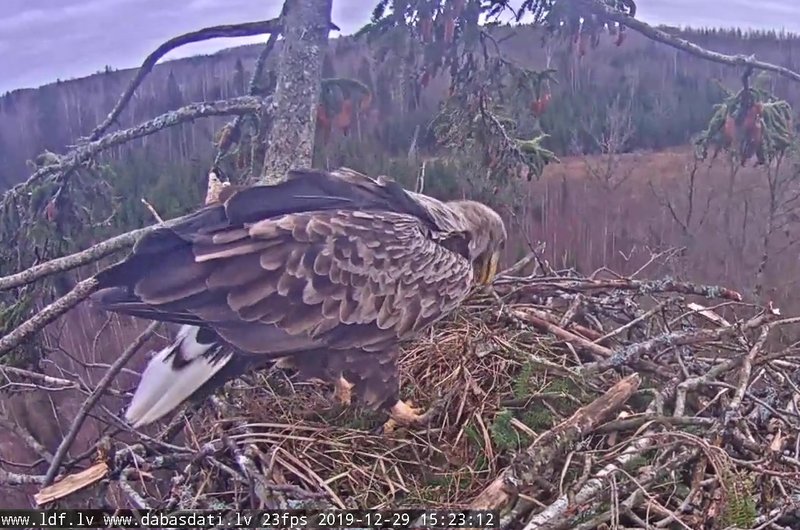 then he started looking around with his neck stretched high. 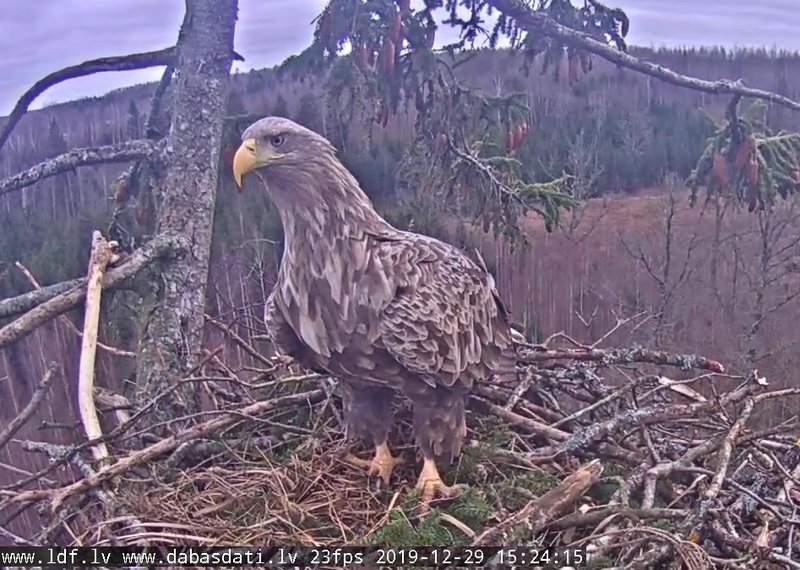 
15:33 Raimis flew out.
15:33:30 Milda called in the forest.
15:34:10 => more unhappy calls.
then an eagle flew by from the right. another flew towards the first from the left.
the second looked rather dark, especially the tail didn't shine white. maybe that was the girl from this morning.


(my posts seem to be here in mixed order. i'll fix them later. darn forum.