I thought that they are different but later, after more pictures, I think it's the same one.

It is seen under another light or position, which gives it a look from different angles.

The method of flight is really unic; we never saw strangers doing it and so young.
Top

hello! i came back earlier than i expected.

the beak is different too. 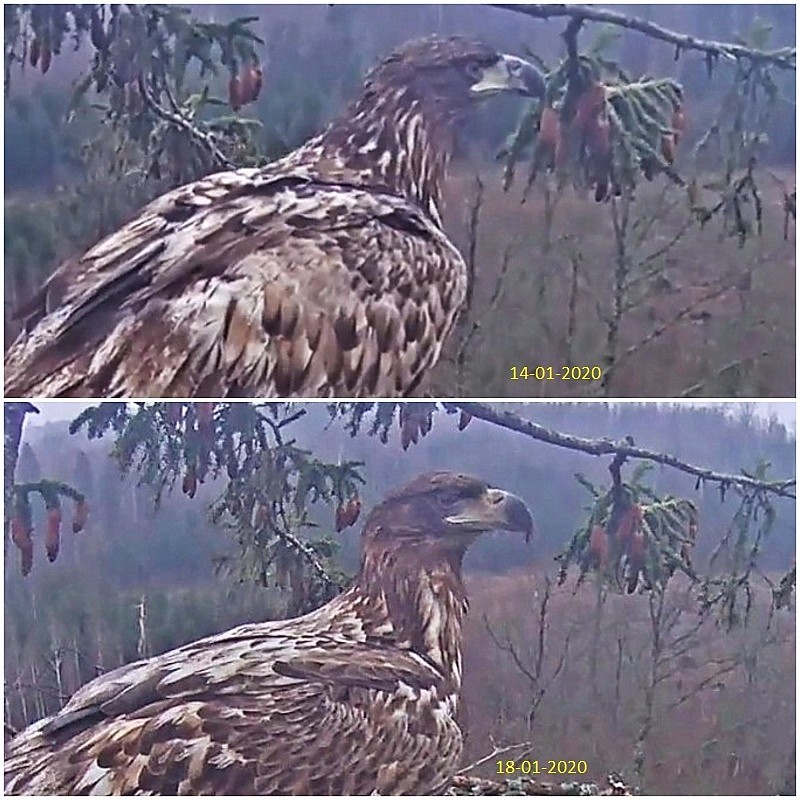 aha! the beaks do really look different. the eagle on 14th had a dark stripe behind the nostril.
i made two pairs of pictures, too.
i think i'm changing my mind about this. i think they are two different birds after all.
the tips of the longest feathers on the wing are different. today's bird had dark tips and the feathers look longer, too, at least one of the feathers. the the tips of the wing feathers of the "14th bird" look more worn. 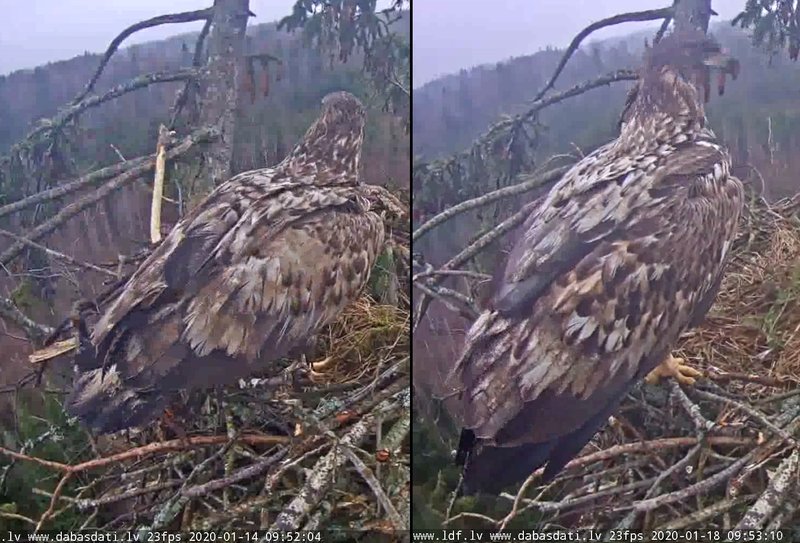 the "petticoats" (the feathers under the tail) look different, too. today's bird had a lighters petticoat.

visitors to the nest. December, January


I have no opinion about the last two visits))
Top

in the morning it seemed to me as if the ankles of today's eagle looked too thin for a girl...

i made a picture of both for comparison. now the ankles of the "14th bird" and today's bird both look rather thick. - i had to enlarge the "14th bird" to compensate for her standing in the back of the nest. it's the shape of the ankle that matters.

whether there was one eagle or two doesn't really matter, because we'll never know for sure. i took solving this as an exercise for trying to identify birds. we have seen so few recently that any training is good.

fly to visit .. and well
Top 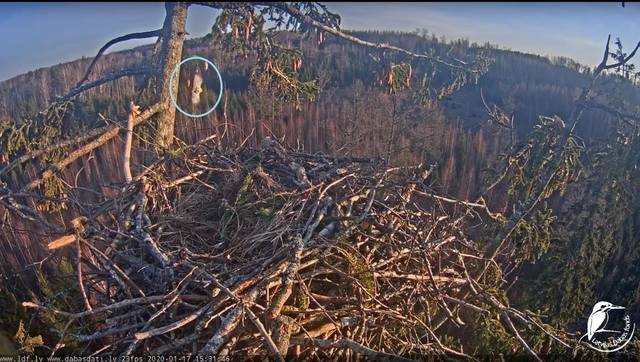 She flew off the branch.

yes, it was a little bird.

i can't say what bird.

i could not hear anything else but wind.
i don't believe that Raimis would have stood on the nest if there had been people nearby.
they both flew far in the sky when Janis and Maris were at the nest. they were so far that we hardly could see them.
Top

ame wrote: ↑
January 18th, 2020, 4:46 pm
...
i could not hear anything else but wind.
i don't believe that Raimis would have stood on the nest if there had been people nearby.
they both flew far in the sky when Janis and Maris were at the nest. they were so far that we hardly could see them.

Maybe that's why Raimis left? And he flew in the opposite direction, to the right.

Then I watched a hundred videos and a thousand photos. It was worth Milda turning her head a little bit like a beak looked different. If I tried to identify Milda by the beak, I would have 100 Mild.

But we know Milda's alone.
It is not possible to find the same view, at a single distance and with the same illumination. For me, a beak is not a sign now.
Everybody's a recognized marker, it's a tail. I don't see the difference in tails. 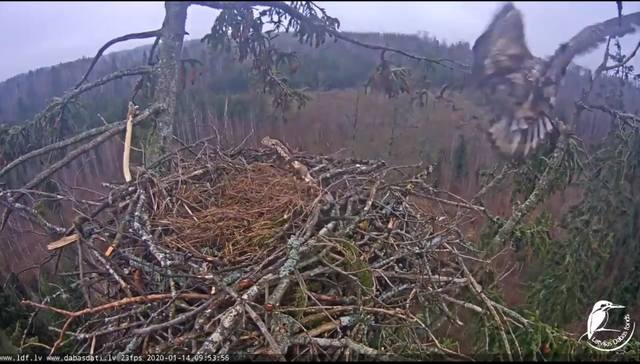 So did Crissy and I notice the mark on the right wing.

I think it was the same juvenile eagle, this one had similar feathers layout on the right side 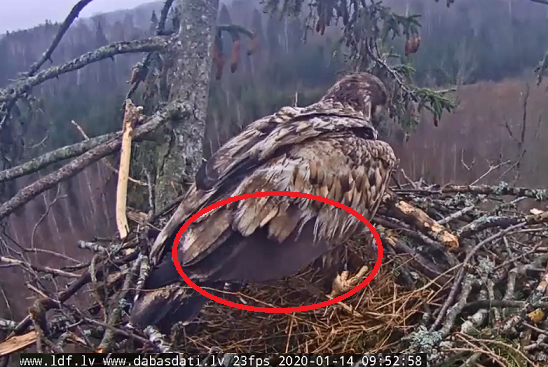 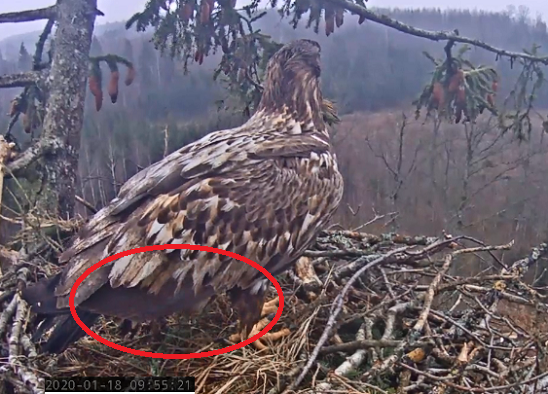 There's another thing for me - body shape. But nobody sees her but me.

a few more pictures of the visitor this morning 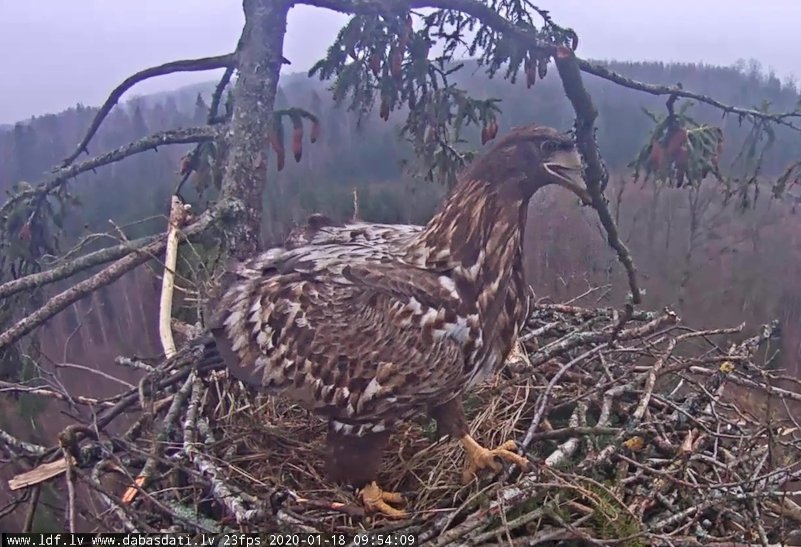 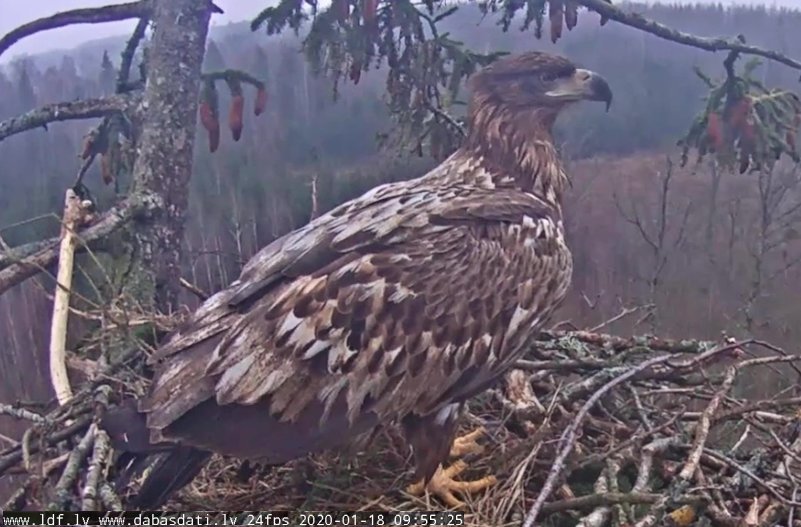 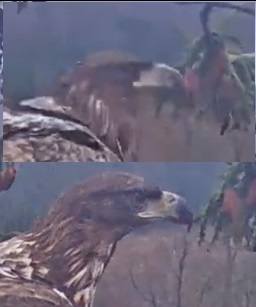 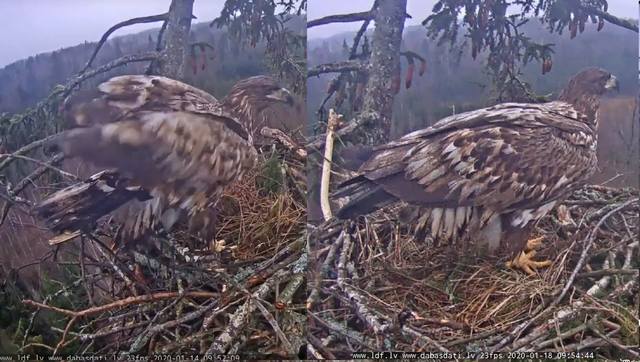 On Sunday, it's time to visit us

Abigyl, I hope they will come. I miss Milda

Now you have to check your videos whether someone has reported it and then an age restriction is made by youtube. I had the problem. But it was resolved quickly. If you are not careful, you even cannot show any feeding. It could take children to a psychiatrist. How crazy is that
Top

windy weather and cloudy again, but this is ok. we have seen worse.

Liz01 wrote: ↑
January 19th, 2020, 9:05 am
...
Now you have to check your videos whether someone has reported it and then an age restriction is made by youtube. I had the problem. But it was resolved quickly. If you are not careful, you even cannot show any feeding. It could take children to a psychiatrist. How crazy is that

i chose the setting that all my YT videos for children. maybe i should change?

i don't believe that many children would watch our videos very long. in most of them nothing special happens. i think they must be rather boring to children, compared to all other things that are especially made for children.
Top

here you have a special gift or a talent: you can see the body shape.

i can't see anything at all in that respect. you beat us all here with 6 - 0.

first of all, the picture with the beaks: i cannot guess which is who. the other picture is so blurred that one can only see that it's not an adult. (Sonchik may even tricked us and both pictures are of the same bird!

)
the tail pictures of the eagles leaving are not clear enough to make a reliable comparison. the tail should be seen on the nest, not any farther. yesterday's bird didn't show its tail properly so the tail is out of the question, too.

i think that the pair of pictures of the beaks which Liz made yesterday gives us a real clue.
i marked here the dark stripe on the "14th bird". that is something real which yesterday's bird did not have. the length and the shape of the beaks is more difficult to compare because i don't think that we can see exactly full profiles of the birds. the "14th bird" may be looking slightly away and the yesterday's bird to us. i also made a new pair of Crissy's pictures. i perhaps could not explain well enough what the differences were. i marked there the details which are different.
the "14th bird" had feathers of clearly different lengths on its wing. on the rear side (closer to body) there is at least one very long feather and then a row of shorter feather. 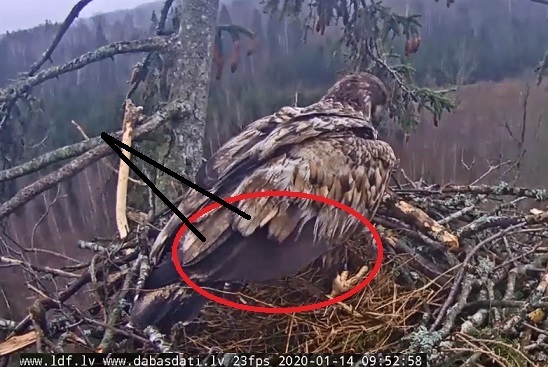 yesterday's bird had feathers of more equal length. -it's also possible that they have folded their wings a bit differently so that the long feather on this bird are outside the yellow (and red) ellipse.
the more striking difference is, however, that the tips of the feathers on this bird have darks spots ("eyes"). i have marked two of them with yellow lines. 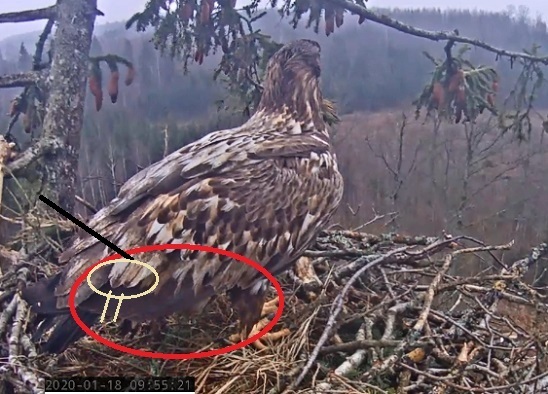 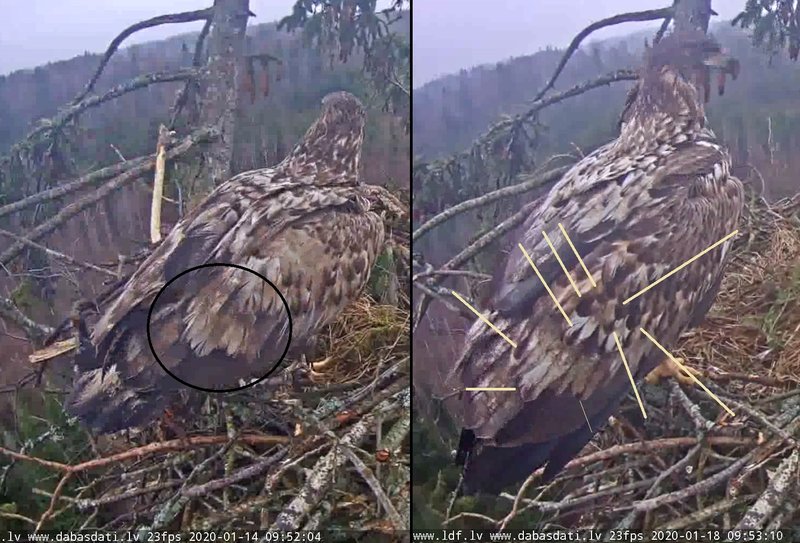 Sonchik wrote: ↑
January 19th, 2020, 9:48 am
......When these innovations were introduced, I immediately chose in the settings that all my videos are for adults. All my new videos automatically have this setting.

I did it too! But you have to set, if a video is not suitable for children. You don't automatically have 18 +
When I make videos, e.g. As Harriet and M15 eat part of E14 (their chick) , I have to click explicitly that it is unsuitable for children.
I didn't do it with the broken blood feather video because I didn't think it was inappropriate. So someone reported it. Thank you youtube user! No matter how, it is again for everyone to watch.

i don't believe that many children would watch our videos very long. in most of them nothing special happens. i think they must be rather boring to children, compared to all other things that are especially made for children.

From my experience with kids, even those who knows the YT, you need to stay with them and to explaine the story and the basics like importance and nature around etc. They are very interested and always ask when eggs are coming again or about the falling-building of nest. You have to be around to stop/change the video where there are parts not for kid's age or education.
I have 2 kids of my neighbours, a nice VEGAN family; I have to be very selective with them. They don't have TV at home but come to watch cartoons with my family