And here is another story sort of summing it all up


but I would really be interested in any more information on the Swedish case of dead black birds.
Top

More bird deaths - this time in Romania, and an explanation too - binge drinking.

Apparently nobody told the poor birds that booze only makes you THINK you are warm in winter. Poor birds, but they probably "felt no pain" when they expired!

And I heard the Italian birds died of over consumption (of some kind of seed?).

I notice often birds don't eat all that much fresh fruit, but the last time I was at Finley Wildlife refuge, which has a fair number of apple trees as a former farm area, I noticed the Towees were absolutely munching down on the apples -- I suppose alcohol might have been a danger for them.
Top

Dishwashers are a source of pathological fungii
According to The British Mycological Society journal published recently: fungii from dishwashers are harmful.
http://www.sciencedirect.com/science/ar ... 29#FCANote

from our newspaper yesterday. The consequences I don't know.

Nor the solution.( have'nt read the full article...and there is,maybe copyright)

edit: e.g.Exopiala fungus is reported elsewhere in the home. Like bathroom,in the sauna,Turkish baths.
Its a fungus that loves 42° PLUS temps. for profligation.
I think its that black trace left around the bathtub or washing machine.

Its harmful.
Carmel a member of SHOW .. I hope you love birds too. Its economical. It saves going to heaven.
Emily Dickinson
Top

In court these people were convicted for vet.medicines smuggling;

A study of the spread of Lyme disease and fears for the future. i.e. Biodiversity changes

Good clear video.
Carmel a member of SHOW .. I hope you love birds too. Its economical. It saves going to heaven.
Emily Dickinson
Top

alice44 wrote:And here is another story sort of summing it all up


but I would really be interested in any more information on the Swedish case of dead black birds.

About dead blackbirds in UK - they died of alcohol poisoning.

I just saw this topic the other day and this is the first chance I have had to post in it.

In regards to the red-wing blackbirds, found dead. This did not happen only in Arkansas. It also happened in Louisiana, as well, just days apart.

A lot of us in the owl groups were discussing it at the time it happened and I know the findings were that it must be because of fireworks and I quickly pointed out that this NEVER happens on the 4th of July, so why only one specific holiday, rather than any holiday that fireworks are set off?

I seriously doubt that it was the fireworks that caused them to fly to their deaths.


July 28, 2015 - A lot of you do not know about these eagles. It was mid-June with a wing fracture found in Brandenburg, whose cause is unknown. Its origin is unknown. Now it is maintained in the wild bird station looking for a godfather.

The injury to his left wing was not without. While the veterinary clinic in chaff fraction injury gets in some patients by rail and restraint in the handle, the medical repertoire has been expanded for this Eagle: with surgery had to be directed to the wing fracture. The medical team has done a great job here, because recently there is the sea eagle in the wild bird NABU station and continues to recover excellent.
Top

Link to download for scientific paper
https://avianres.biomedcentral.com/arti ... 20-00223-8
Nature does nothing in vain (Aristoteles)
Top

Thank you, Bea, for posting these links. Rather irritating. But good that we know. There will hopefully soon be other means to track without an impact to the well-being of the birds.
Top

Thanks for the article, Bea
... and what is wrong with internal organs?
Questionable ...
Top

Rom New Years Eve- 2020/2021
Here's what happened last night in #Roma
Hundreds of birds have fallen to the ground in Via Cavour, precisely in the stretch between Termini Station and Santa Maria Maggiore.
The strange episode would be attributable to the terrible noise of the New Year's barrels, which would have caused the birds, frightened and disoriented, to collide with the high voltage wires or against the windows of the buildings in the area.
As you can see from the images, it is a real death of birds. During the night hundreds of starlings crashed in the last stretch of Via Cavour, between Piazza dei Cinquecento and Santa Maria Maggiore.
Presumably these are the birds that usually stationed on the trees of the Termini station. For them the crash of New Year's Eve would have been fatal, during which the ordinance of the mayor Raggi, which forbade the explosion of barrels and fireworks, was literally ignored.
https://www.rainews.it/tgr/tagesschau/a ... lsl4m5aguY 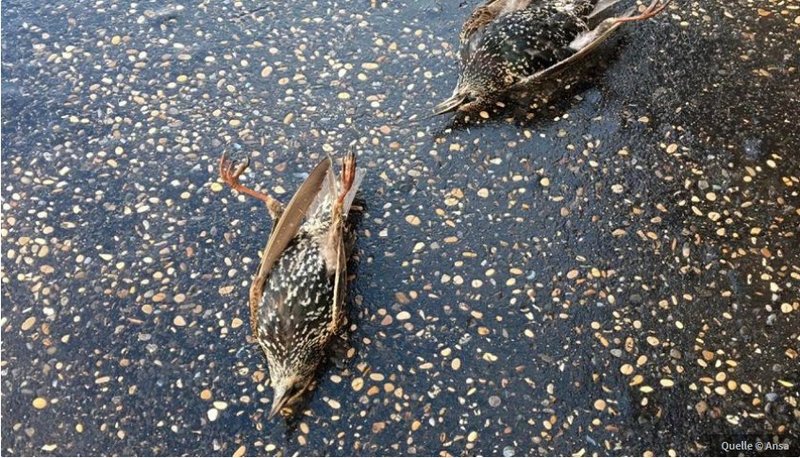 Return to “Stories and News”