i guess the positive side of this is that it's not snowing more.
Top

Thursday it will become again warmer in Estonia.
the half live consists of arrangement, subordination and regulation
Top

Last two nights the cam went off around sunset, did not get the exact time, but it had become dark by the time. Today it is still not off, it is that black and white picture, one can make out the snow in the nest, and there is the sound of the wind.
“One can measure the greatness and the moral progress of a nation by looking at how it treats its animals” (Mahatma Gandhi)
"You can judge a man's true character by the way he treats his fellow animals" (Paul McCartney)

Dawn & the snow has decreased. in the afternoon the temperature has been +4 degrees for some time. picture at 16.00:

but the weather forecast is still not very "springy".

This is my last picture from today.

Interesting sounds-- I think this is the calling of Common Snipes on the forest floor under the old white-tailed eagle nest. The moonlight is bright, so I can make out some outline of the tree limbs holding the nest.

you right Kitty, it's a common snipe who is making that sound but it's not a call. the sound comes from the outermost tailfeathers of the bird. it flies in circles above its territory and makes deep dives and then rises up again, like in a wavy motion. while it is diving it streches out the tail feathers and they make the baaing sound when they vibrate in the airflow. here's a picture (by Pasi Parkkinen) which shows the feathers in action.

Interesting sounds-- I think this is the calling of Common Snipes on the forest floor under the old white-tailed eagle nest. The moonlight is bright, so I can make out some outline of the tree limbs holding the nest.

That must have been that deep, booming sound I heard. I wondered what it was. Thank you, Ame, for the information & great picture of the snipe. I was surprised to think of them flying like that at night, but I guess the moonlight was very bright the other night & they could see.

haa! i missed the bittern! thank you Fleur for pointing that out!

i think the snipe should be a diunal bird but maybe it had just arrived and was eager to claim the rights to this territory and began the baaing-flight right away.

i recorded a short clip from here because now the common snipe was calling there. it wasn'rt very near but i hope it can be heard on the video. its call goes tik-kot-tik-kot-tik-kot-... while calling like this the bird stands on some pole where he has a view over the surrounding swamp or shore or meadow. -btw: it's raining here as well (but it's water).

new snow has fallen on the nest.

at 1 am the camera is on showing "snowing". two dogs are talking to each other over some distance.

now it is high time for me to

good morning!
i think there was a robin, too, in the end (together with the caws of a hooded crow). that's a new arrival.
Top 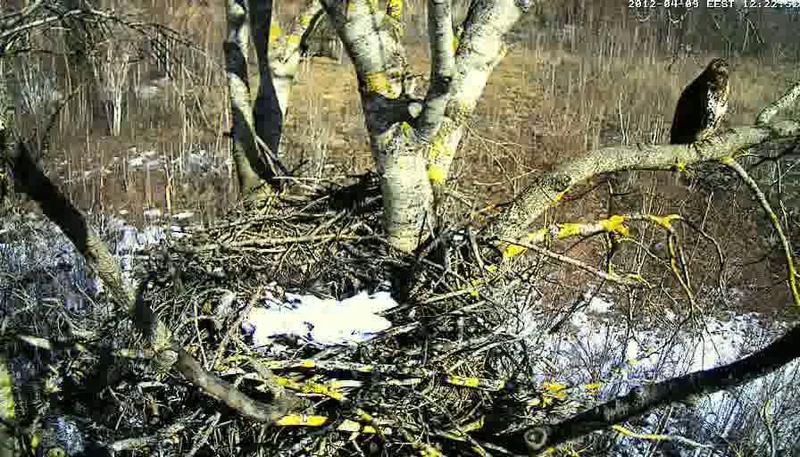 What a joy to see a bird on the branch.
Top

We discovered the bird at the same time, Bleggi