This osprey nest is located in Võrumaa in southern Estonia.

The nest is about 2 km from a fish farm and a lake is also nearby - both are good fishing grounds for osprey.

Last season, we watched Madis, a father for the second season, and Piret, his mate, raise and fledge three young. You can see pictures and videos from last season HERE.

Madis was ringed* by Esa Sojamo in Finland, Lappeenranta region, Kymi, on 7 July 2007. According to Urmas, he probably started to nest in 2011 (the nest with two chicks was then about 200 m away and fell down in the winter), but there are no ring readings from 2011. The two chicks were not ringed in 2011.
* We do not have Madis' ring number, and it is not possible to read it on this webcam. The three chicks who were ringed in 2012 were S8 (Uno), S9 (Elo), S7 (Nori); we do not expect to see them back in this area until they are 3 years old.

Piret was not ringed before she mated with Madis, but was fitted with a transmitter and rings (designation S0) on August 4, 2012. We followed her migration to Africa in August/September and hope to see her back in March/April.

Urmas preparing the camera to look at the nest. Photo copyright Kotkaklubi

Looduskalender articles about all the osprey nests in this project can be found HERE
This article introduces the nest for this season.

(Sample) Link to Pontu archives:
http://pontu.eenet.ee/kalakotkas/2013-0 ... -07-37.jpg
Change the date (in two places) and the time (in 24-hour style) to see the archived picture for a particular day and time - there is one picture per minute.


edited by NancyM 6Apr2014 to correct some info.
Top

Piret was fitted with a transmitter "back pack" on in August 2012.

Piret headed south on August 17, 2012. In three days, she had reached the shore of the Black Sea and spent a few days in the Dnepr river estuary. After some backtracking in Africa, she reached her wintering place in South Sudan. She began her return trip north on March 11, 2013.

Image(s) are from the interactive map at http://birdmap.5dvision.ee/index.php?lang=en

Piret's route going south for the winter. Her route is shown in pink, and that of another Estonian osprey, Ilmar, is shown in blue.

An unringed female ("Oxana") spent a lot of time on the nest, trying to establish herself, but Madis was not receptive.

April 22 Piret returned to the nest and was seen at 16:24. Oxana, the new female, challenged Piret. The camera was dislodged but fixed late at night.

April 23 Piret was on the nest but continually "dive bombed" by Oxana. Piret left the nest. (Piret was seen a few more times - need to add dates. Madis mated several times a day with Oxana.)

May 3 Piret began attacking the nest; both Madis and Oxana appeared nervous all day. Oxana was injured in a fight off the nest- she sustained a large wound on her right side/leg.

Details from forum posts:
16:52 Piret landed on the nest. She was attacked by an osprey, possibly Madis, and left the nest.
17:13 Piret lands on the nest again, and again Madis chases her off
17:40 Oxana comes to the nest, Madis mates with her.
17:49 Fight between females off screen, Oxana injured - pictures show a large gash on her right leg
17:57 Piret back on the nest for a few seconds. Oxana left seconds before Piret landed.
19:15 Madis left and Piret landed on the nest again. She was attacked many times and finally she left.
19:19 Piret reetuns to nest, Madis flies at her (see lisbet's picture)
19:33 Two ospreys fighting in flight in the background
19:56 Madis left and Piret landed. Madis attacked her and Piret left.
20:14 Oxana back in nest, Madis mates with her. (She flies off and on the nest repeatedly.)
20:18(?) Another mating between Madis and Oxana.
20:35 Someone on the cam, then Piret in the nest, then fight, all within that one minute.

May 4 Piret returned to the nest repeatedly, Madis (?) attacked her each time. Oxana returned in the morning, inspected the egg and mated with Madis. She was last seen at 10:12. Madis brought a fish to the nest, but then attacked Piret.

May 5 Piret brought twigs to the nest. Madis brought several fish, which Piret carried off the nest each time. Several mating attempts. Madis sometimes incubated the egg but Piret never did.

Details from forum posts:
05:08, 5:15 Piret flies around the nest, brings lichen-covered twigs
06:15 Madis delivers a fish. Piret first went up to the cam stand and left the fish in the nest, then returned and took it away. Another bird made a "fast attack."
06:43 Madis uncovers and incubates the egg.
07:19 Madis leaves the nest, Piret returns with a tail end of a fish.
07:48 Madis and Piret on the nest together, briefly.
08:58 Madis incubating egg.
09:24 Madis attempts to mate with Piret (not successful)
09:47 Successful mating of Madis and Piret.
10:45 Mating (attempt). Madis mantles afterward (submissive, wing drooping posture).
11.56: Madis incubates the egg.
15:35 Mating (attempt, wind is strong, might have interfered).
16:34 Madis brings a fish, Piret takes it away.
16:47 Attempt to mating failed because of wind.
19:44 Madis brought a fish for Piret, she took it away.
21:32 Mating attempt.
Top

We are anxiously awaiting the cam to be turned on, and for Madis and Piret to arrive.
Top

Thank you, Nancy, for the professional and detailed introduction.

One planet meets another. Planet 1 says to Planet 2, “Hey you look terrible”. Planet 2 says, “Yes I know. I have Homo Sapiens.” Planet 1 says, “Don’t worry. I had that too and it will soon disappear.
Top

for a second I had a picture from the camera.
work is proceeding

I hope so much to see Piret and MADIS
Top

Yes, we can see the nest and hear voices

One planet meets another. Planet 1 says to Planet 2, “Hey you look terrible”. Planet 2 says, “Yes I know. I have Homo Sapiens.” Planet 1 says, “Don’t worry. I had that too and it will soon disappear.
Top

Here it is, maybe cam is still with a little hick-up, but it begins to work 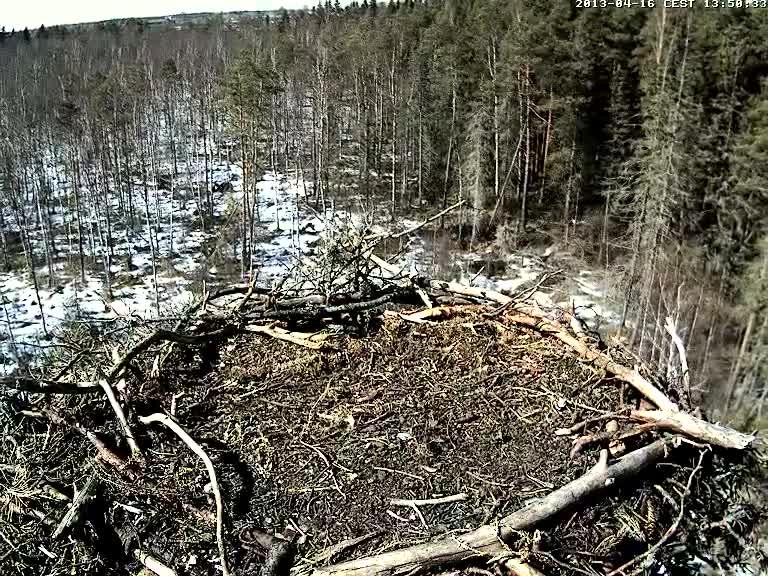 A raven appears on the nest. lol 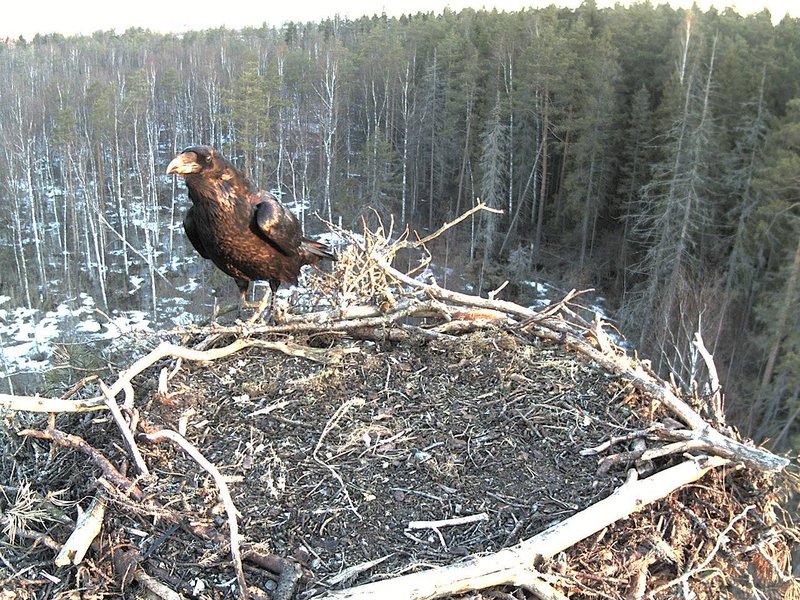 The colours between the eyes look very much like Madis but the right foot could not been seen..... waiting to return.....
Top

lispet wrote:The colours between the eyes look very much like Madis but the right foot could not been seen..... waiting to return.....

Yes, I agree, it looks very much like him but markings on the back of the head appear slightly different. Osprey are so very difficult to ID unless they have very distinguishing marks.

Chimega, if you look at the pictures, pls check also the time about 5-10 minutes after the above photo. The osprey visited the nest a second time but I did not get a photo. This time I could not see the right ankle either.
Top 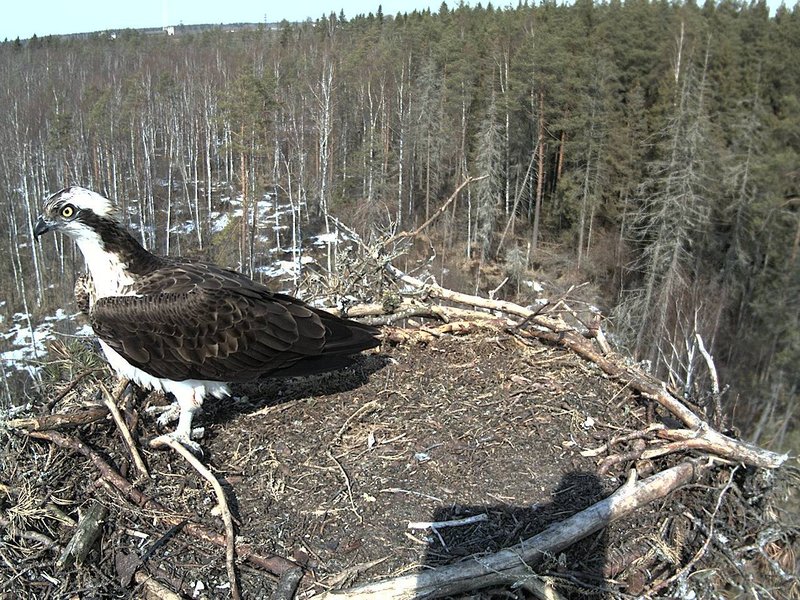 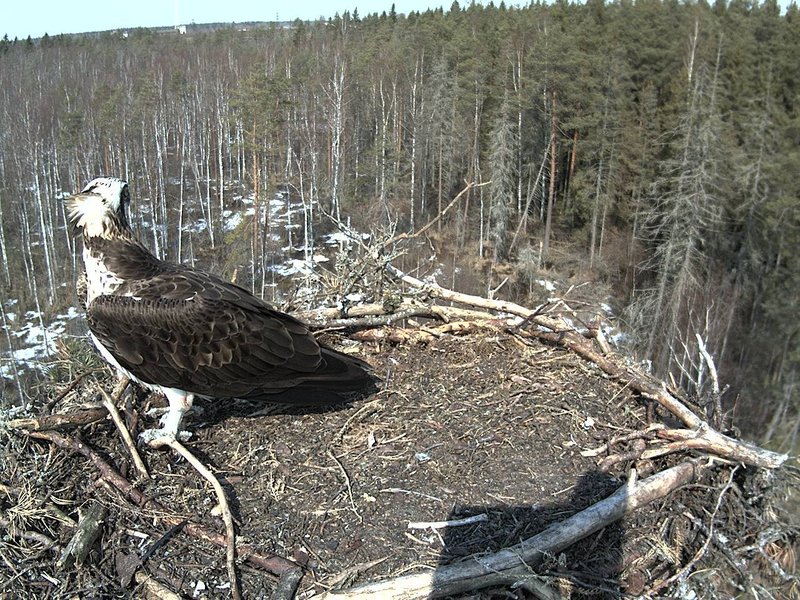 this is the video of a be-friended viewer:

video of 2nd visit of whoever :)

Could it be Madis??

If it was really Madis, he could do some houseworking.…

One planet meets another. Planet 1 says to Planet 2, “Hey you look terrible”. Planet 2 says, “Yes I know. I have Homo Sapiens.” Planet 1 says, “Don’t worry. I had that too and it will soon disappear.
Top
Locked
4592 posts