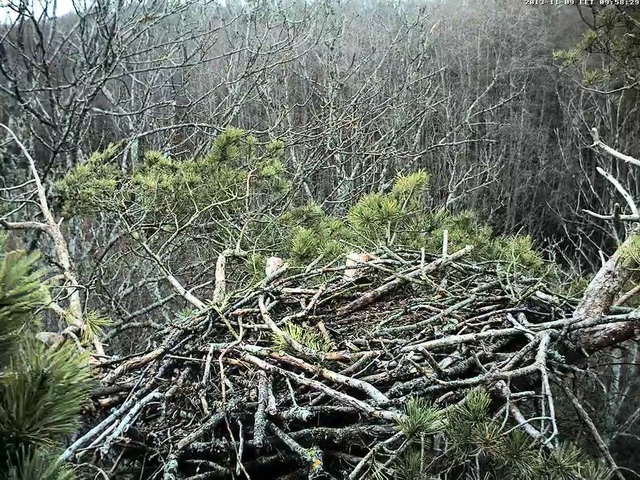 the wind blows hard and loud in gusps today.

thank you for the eagle call videos and other recording and pictures, too. it sounds like Sulev's voice. he is probably guarding his territory.

Here many voices of birds and wind noise...and the sea. It makes me happy!

It seems to me that before I flew smells algae.
Top

now i see that 'our' nest is front page news: http://www.looduskalender.ee/

it says that the camera was taken from the black storks' nest, dried and then brought and installed here by Urmas, Renno and three Finnish visitors, Matts Finnlund, Ismo Nuuja and Jorma Mäenpää
(or Jarmo; in the text and in the figure caption the name is different ).
the Finns are planning to set up a nest camera in the Quarken area.

Renno, Matts, Ismo ja Jorma and the big batteries needed in the forest (on the ground on the left).

the camera installed above the nest ( hopefully high enough

Thanks for the up-to-date infos and pictures, ame!

i was away yesterday and today i checked the Pontu-picutres. i found that one great tit made a very thorough investigation in the nest ay 8:48 - 9:02. part of the time it was working literally inside the nest. here's a gif made of the Pontu pictures at that time.

at 8:59-picture the tit was out of sight but then it appeared again at 9:00. it peeked out of a whole between branches right in the middle of the front rim of the nest.

it looked so funny, as if the tit was planning to move in for the winter and so i downloaded the Pontu-video from the morning to make a shorter recording of it to post here. the tit comes out to be seen in this clip also in the rim a little left to spot where it peeks above.

the tit must have been looking for food there, some insects or larvae. it seemed that it was picking pieces of grass or leaves or pine needlas and throwing them over its shoulders as it was working. it was so busy there that it didn't ever make a lot of calls.

finally it disappeared in the right upper part of the nest.

later at 9:33 a blue tit visited the nest (on the left side)

in the next Pontu-picture a great tit was there again.

i want to see what they were up to but today i shall have no time to make that clip. i'll add later a video clip.
Durbe WTE chick hatch countdown 2020 https://www.tickcounter.com/countup/157 ... will-hatch
Top

and the second at 11:30. -of course there could have been more but these were the ones which i found in the Pontu pictures.

i found out that earlier at 9:33 there were two bluetits in the nest, not only one. the first came in from the right.

then the second joined it on the left (and about the same time the great tit came in from the right, too, but it's not yet in this picture).

and of course one of them came to check the camera.

It's so nice to see what's going on in Linda and Sulev's nest. Thanks to everybody for your observations, pictures and video's.
Top

With the installation of the new camera for the new season, we can close this topic now, and start afresh with with a new topic.

This topic is locked now and the new topic is awaiting your attention!!
Top
Locked
6572 posts