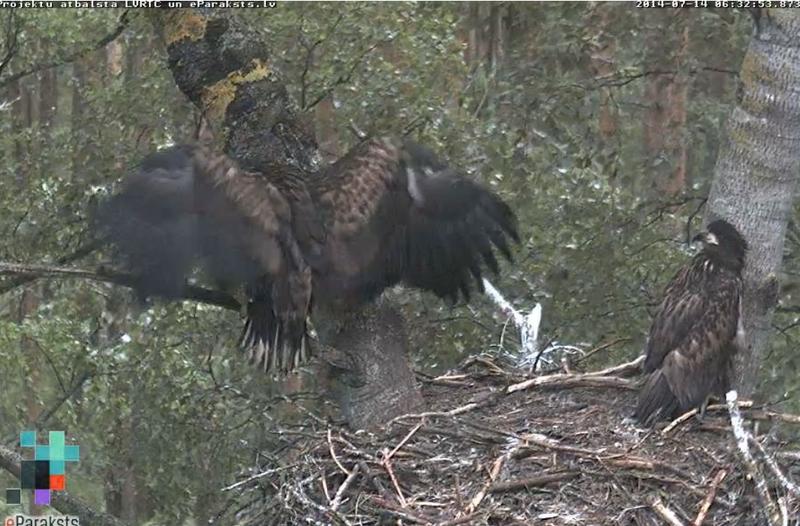 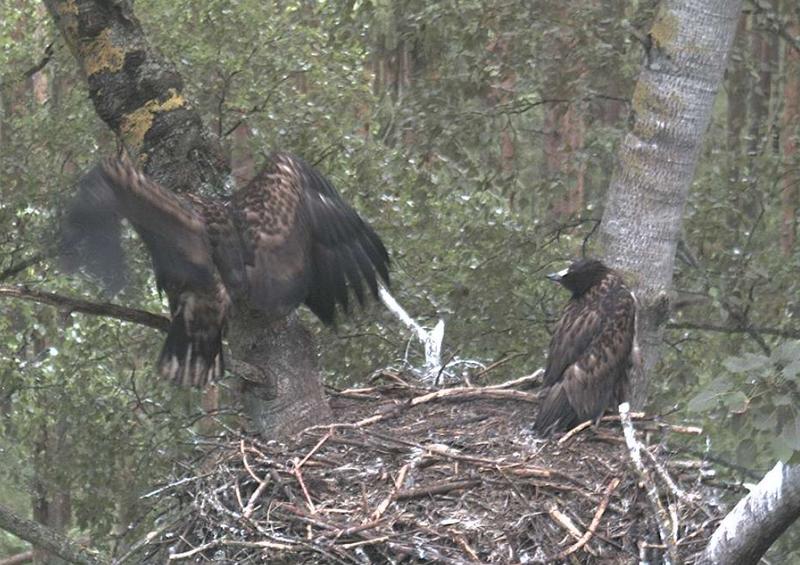 P? has made begging call, as M hopped down again.

the other eaglet was watching curiously: head upside down. 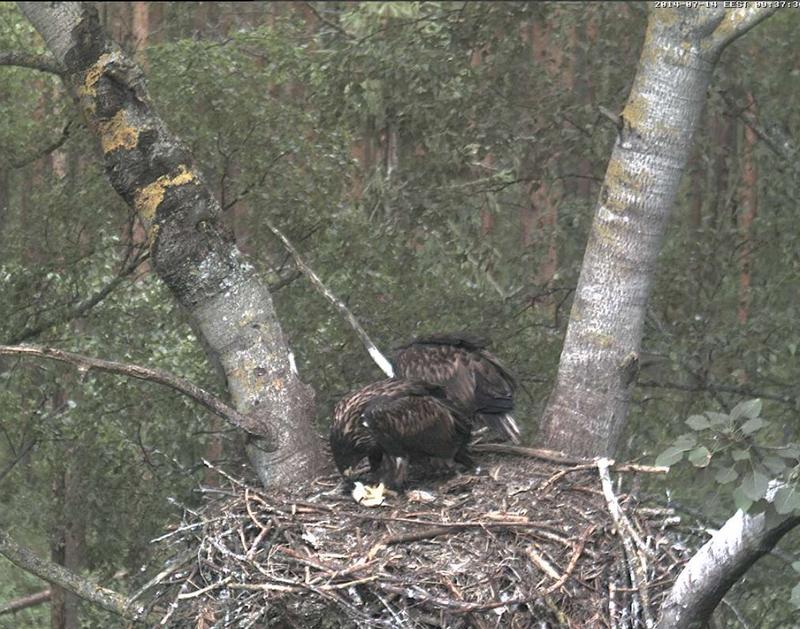 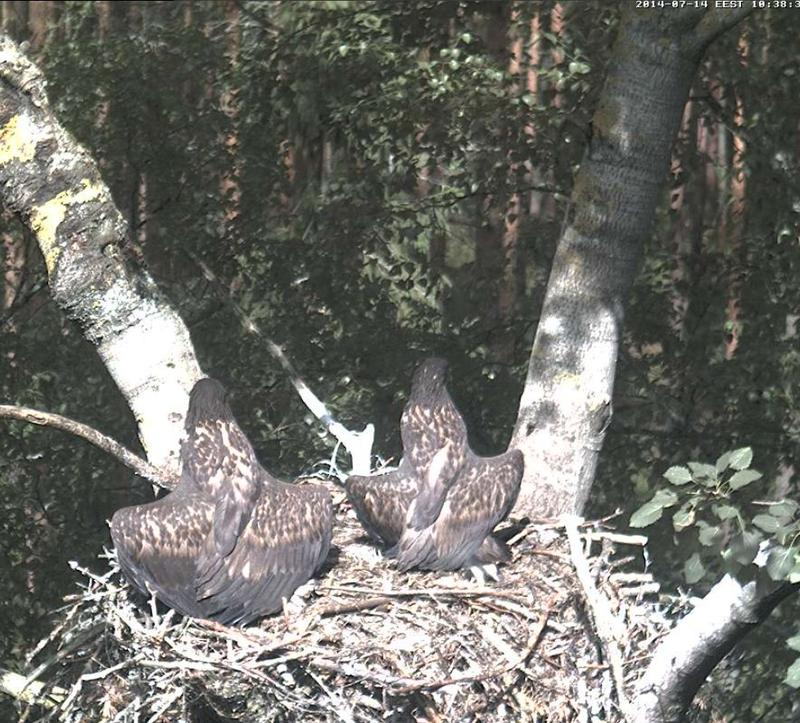 P has a full crop. He can hardly move M wants to fly. He is behind the trunk and has targeted the branch. 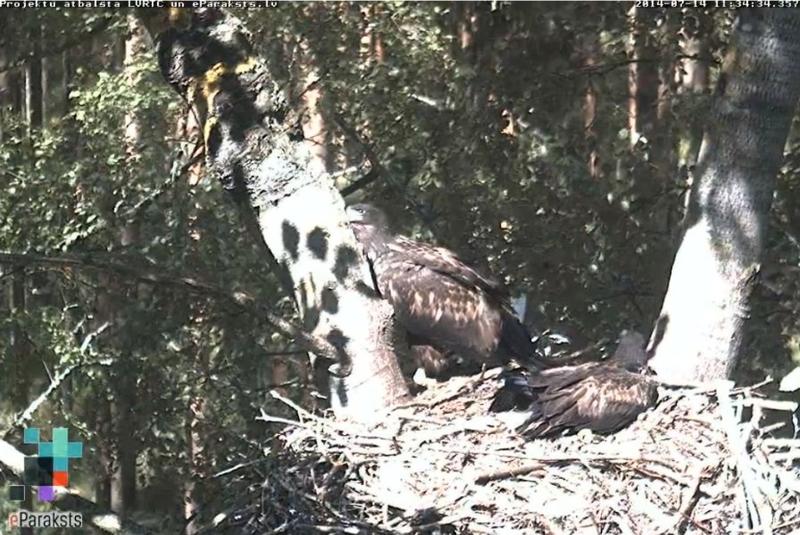 I have only this pic
Top

who eats tapeworm, can fly high

i saw this spagetti-eating, too. this time i think Makonite started but after she finished Pukite was pulling the worm(s) for a long time.
uurgghh...

...but Pukite was pulling them hard that it made me wonder..? could these white things have been tendons from the heron's legs? i would imagine that tapeworms are more fragile.
Top

12:38 Lubana made a short visit. Just a few seconds. I have no picture.
Top

Liz01 wrote:what was going on? everything went very quickly. 2x parents were there?

18_57_21shortly before, must have been as a parent. there was great screaming

an eaglet had a fish in its beak?

that went really too fast for me.

there were two visits one after the other, both by Lubana. the first was the shortest ever! it all happened in a blink of an eye. congratulations Liz for seeing it.

all the pictures where Lubana can be seen are taken within 1 sec. she hardly touched the nest with both her feet. it seems to me tat she had a small fish but it dropped. the fish which Makonite is holding after Lubana was gone she had already before Lubana came.

here in the first Pontu clip Makonite is making some catching exercises with an old fish. Pukite is lying in the nest but suddenly she jumps straight up on her feet, takes some old bones up and begins picking them.


in the beginning of the next Pontu clip Pukite is pulling something really hard from the bones which she found in the nest behind Makonite. these long white strings can't be tapeworms so i think that the earlier ones weren't either. they could resists very hard pulling. and then Lubana makes her blitz-lightning visit.

this was the princess who is so high flown

I was sure that it is Pukite.
Top

then less than a minute later Lubana came again and she had a rather small fish again. Makonite took it and tried to swallow it but tail first! this fish was too big to be swallowed down that way.

Lubana didn't stay long this time either, only for about 4 s.

Makonite had to give up and begin to cut the fish. ... but then both eaglets began to watch something more interesting... i don't know what it was. they were lazy to start to eat.

the picture with the fish in its beak looks crazy 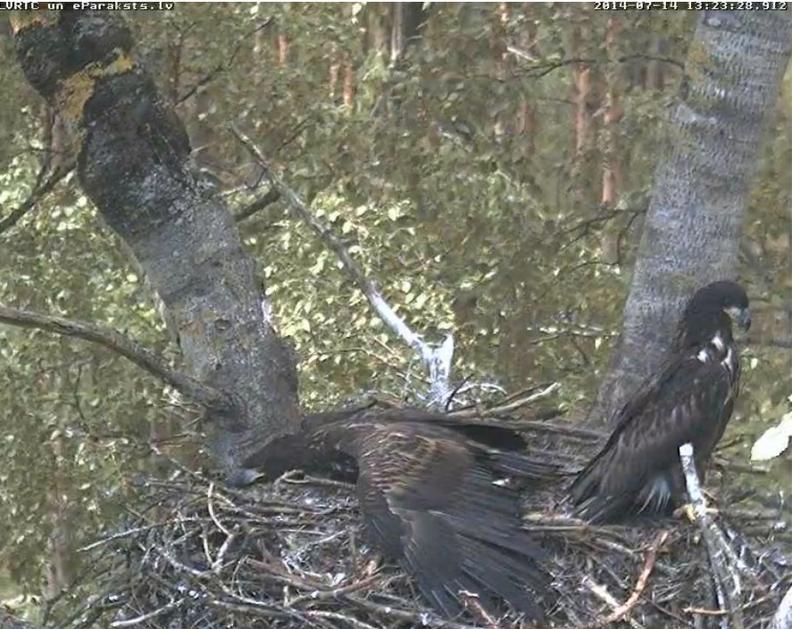 i found a harmonious moment in yesterday evening's Pontu pictures at 20:13.

synchronous wing stretching
(even though the nest is not so narrow that they'd need roll over at the same time.

i also looked the moment up in the Pontu video and made a clip of it.

Liz01 wrote:Pukite jumped for a moment so high that she was outside of the Camera
Ame, from 18:15 they make extreme wing exercises
[img http://up.picr.de/18904571sk.jpg /img]

here's a Pontu clip which includes these high jumps.


edit: ok, here's a new clip which begins later than the above clip and extends longer so partly these two clips show the same exercises. Y-tube doesn't allow longer clips than 10 min as a rule (or is it 15 min?

i have sometimes stuffed some really loooong clips there by accident and i haven't received complaints about them...)
- those were really high jumps.

eaglets have had an early morning exercise time between 5 and 6 am, and an evening lesson at about 6 pm.

Ame, the very high flight was about 18:25:15 +- You see the time in the image that I have set yesterday. The video ends before.

i have now the Pontu clip of the fish delivery this morning at 6:05. Lubana brought a fairly big fish and the kids had a minor riot over it. to me it seems that Pukite won the fish-pulling competition.

Makonite paced back and forth behind her back and then stopped and whined all the time when Pukite was eating. that didn't take more than 5 min.