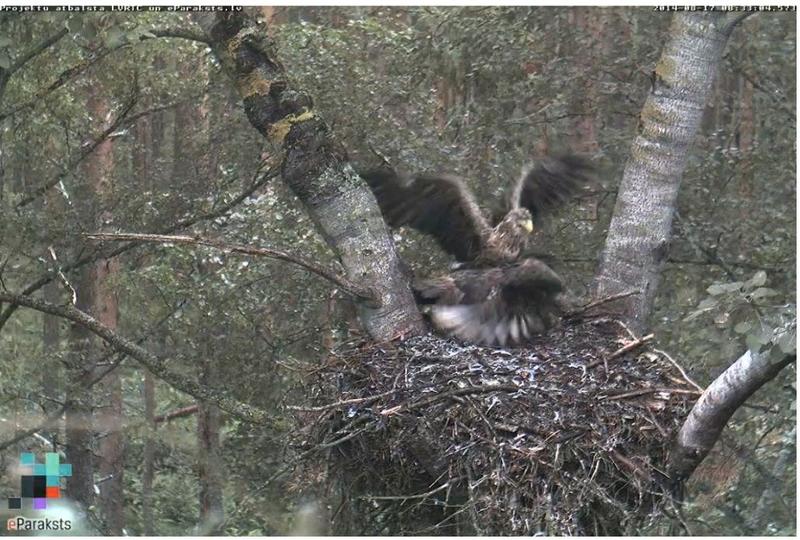 Express Delivery. I do not know whether Sartas or Lubana. it went too fast 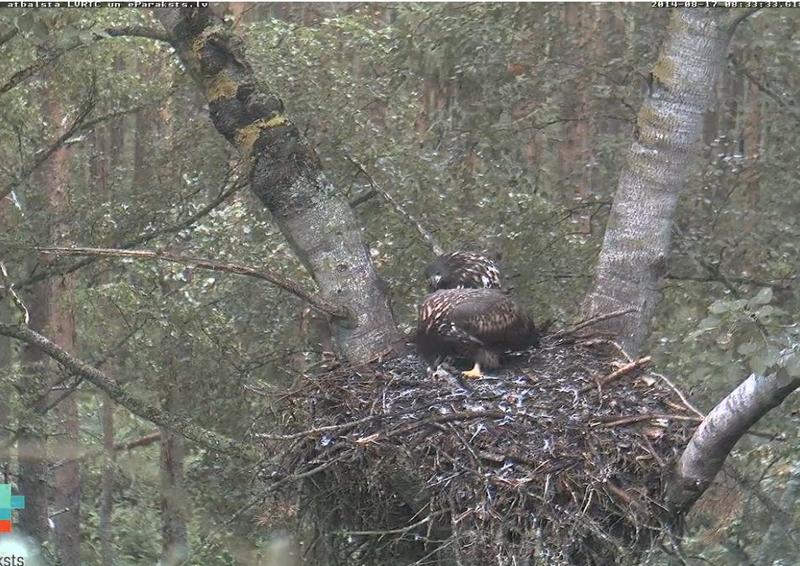 Pukite has the prey, I think
Top 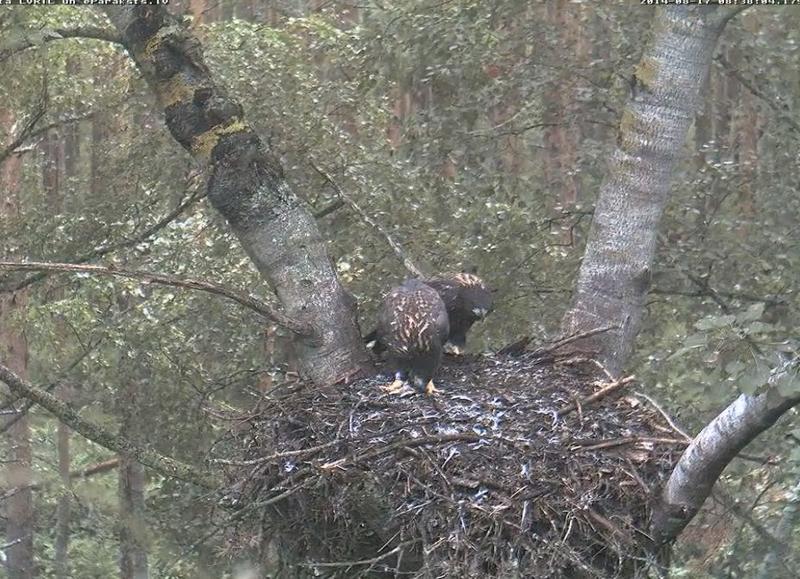 I can not distinguish them

both eaglets are at home. i think Makonite is the one in the front left who has a fish and is eating it. Pukite looks for old remainss in the back of the nest.

i have some Pontu clips from yesterday morning.

6:39 eaglets began to make voices in the forest. they came closer... and then Lubana landed in the nest with a fish and one of the eaglet with a big crash. there was a lot of screaming and then the other eaglet flew around the nest. Lubana jumped to the back branch to rest. then the other eaglet flew screaming to the nest and landed almost on the back of the first eaglet who took off with the fish! the second eaglet screamed and searched the nest in vain: the fish was gone.

to me the second eaglet looked like Makonite. Lubana flew away after resting for a while. the disappointed eaglet got up to the front branch, stayed a minute or two and then flew away at 5:46:46 (at 7 min from the beginning of the clip).

6:02 (yesterday morning) the eaglets began to scream again in the forest... (and a woodpecker was drumming, too).
then Lubana brought a white bird, a gull of some sort, not a very big one she landed so that she stood on the bird: it was still alive! Lubana was immediately followed by an eaglet who took the bird and Lubana left. the eaglet grabbed the birds head in its beak: the gull's head was quite white, and it also seemed to have red feet. it had some grey colour in the wings and the very tips of the wing feathers seemed to be black.

this seemed to be the second phase in eaglet education: parent gives the eaglet live prey. it seemed to me that the eaglet (who i think was Makonite) wasn't handling this kind of prey for the first time. she made a few false catching moves on the bird who still tried to fight back (it crossed beaks with the eaglet; the beak seemed to have red on it). then Makonite began to pluck feathers off the gulls wings in a way that looked she had done that before: she seemed to know exactly what to do and how to do it. the poor gull was still alive.

the gull didn't live long in Makonite claws, but Makonite had to do a lot of plucking before she could begin to eat.

it could be a young bird? 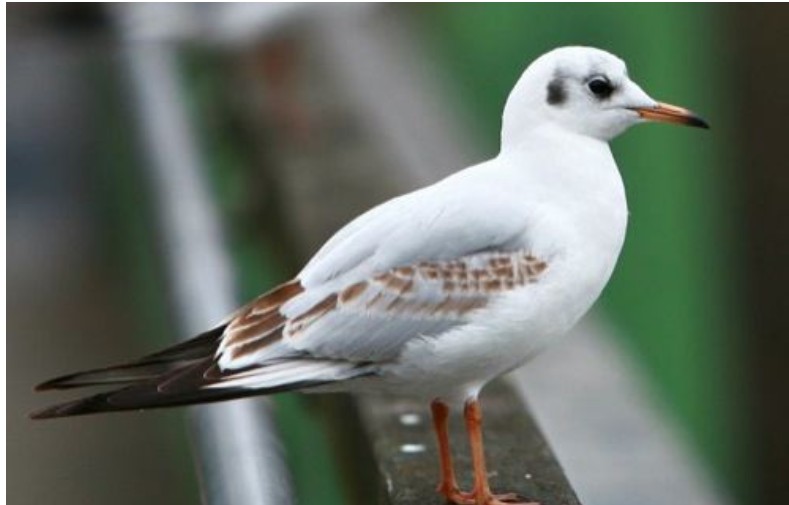 yes, why not a young who is older than one year. my guide shows that the young born this summer should be more mixed colours. they turn to whiter towards the winter. the feet of young black-headed gulls aren't quite red but slightly orange-reddish still. the feet of adults are bright red (at least in the pictures of the guide which i'm looking). the feet on this gull which got eaten looked rather bright red but i don't know how real-looking the colours are either in the book or on the Pontu videos. the light conditions in the early morning yesterday were very good though: a lot of uniform light but no bright sunlight.
Top

Both are still in the nest and chat 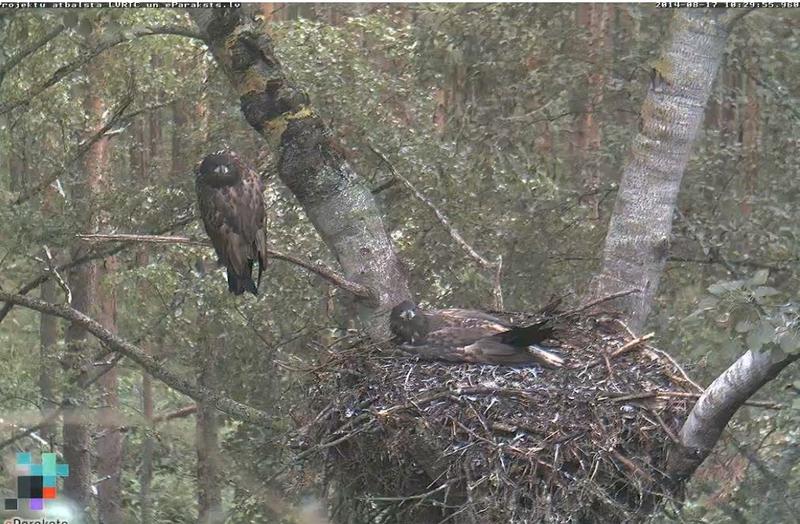 exactly in this moment there was screaming and first flew Pukiter, then Makonite away. I think there was a food delivery.
...i hear Lubana call 10:33
Top

i have now more Pontu clips from yesterday morning.

Makonite worked on the bird for a very long time. either she is a culinary gourmand who likes enjoy a meal thoroughly or a bird is tough to eat.

7.01 (yesterday morning) Makonite had finished and wiped her beak clean. Pukite flew to the lower left branch. Makonite was a bit excited still and fluffed the feathers in the nest and made some fake catching jumps. Pukite tried to come to the nest but Makonite seemed to think that the nest was her territory and kicked Pukite out. Makonite got up to the back branch.
then there were some gunshots, two in a row. someone was hunting ducks or some other birds with a shotgun. later there were gunshots, too, each time two in a series.


7:10 there was sound of arriving big wings... Pukite tried to get to the nest again but with the same result as earlir: Makonite drove him away. then Makonite found some remains of the bird in the nest and ate it. then she got up to the left branch, sat there and looked around, pooped, and finally she flew away. i have a feeling that she didn't go far.


7:18 Pukite landed on the front branch (to see if Makonite was near?) and then he jumped to the nest. Makonite began to protest this action somewhere near... and flew to the nest and kicked Pukite out again. Makonite got up on the top branch and Pukite squeaked in the forest.


7:26 Makonite flew away. later there were gunshots again.

when i was clicking through the Pontu pictures i saw something curious happening at 8:30 - 8:05: a white feather started climbing down while everything else stayed practically still in the pictures.

i made a double-speed video of this. i don't think that the feather could fall by itself or be moved by the wind because it seemed to move along the tree trunk. i think someone carried it down but who?? an ant? and why??

after midday my web connection has been crawling like a snail again....

it must be because of the sports games like in the spring. in the morning the speed was ok but now it's almost desperate.

downloading of this morning's Pontu videos has even failed a few times and i have had to start over again. also uploading of Pontu clips to the Tube takes ages.

i have, however, some new Pontu clips.
here's Sartas coming to the nest at the same time as it started to rain hard at 11:44 yesterday. if fact it seems to rain hails really hard!

i think he brought a fish but it is difficult to see it among the white feathers and hails on the nest.
the hail shower didn't last long, only a few minutes and then it became sunny again.


Sartas ate his fish in sunshine. only his 'coat' and 'hair' were a little wet.


after he had eaten he cleaned the nest a little.

13:33 (yesterday) an eaglet cried in the forest... then Pukite came home. he collected and arranged some bones (or small sticks) in the nest and then he found something to eat.


Pukite found a who-knows-how-old piece of a fish with one side eaten and began to eat that. far there were sounds of thunder... he also rubbed his bottom against the nest and then he made some catching exercises with the stuff that was on the nest.


after giving the nest a thorough cleaning Pukite lay down.

after resting on the nest Pukite got up at 14:07, looked around the forest and preened himself a little... and looked around more...
14:10 he got up to the top branch.


there he sat a loooong time till 14:54. (i'll just add the links to these videos here. each one is about 10 min long. there is nothing special in them to see, just the tip of Pukite's tail in the upper side of the picture

after Pukite had come down he lay on the nest for a few minutes. he got up at 15:03, looked around and got up to the front branch and went out of the picture. perhaps he stayed there.

16:20 (yesterday) eaglets cried in the forest, one from very far and one closer to the nest... then Makonite came in to the nest. she seemed to expect that there would be food but was mistaken. she then waited and listened... i think i heard Pukite's voice here first from very far, and then from nearer to the nest. after a few minutes Pukite flew to the nest tree and landed on the front branch. Makonite screamed at him a little. then he climbed up the branch and out of picture. 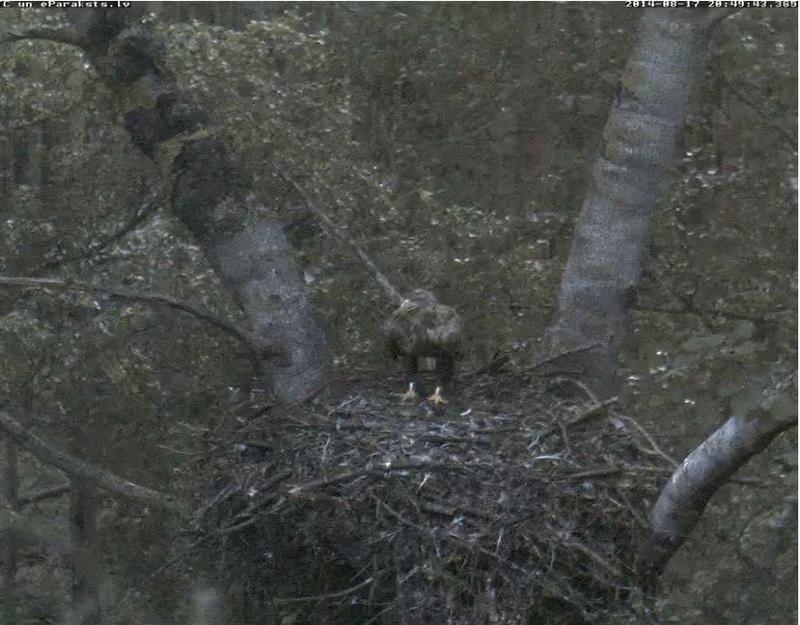 Sartas is on the nest
Top 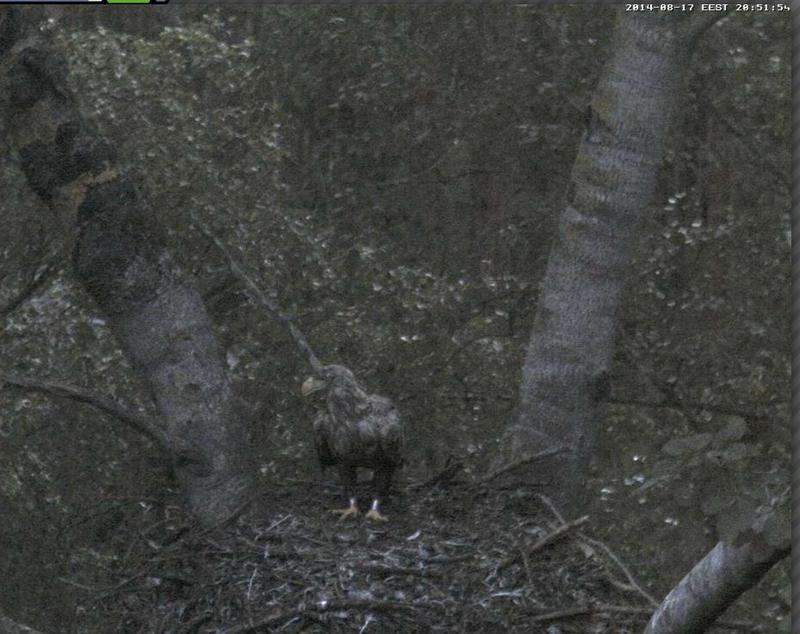 Has he brought any fish. Looks around
Top 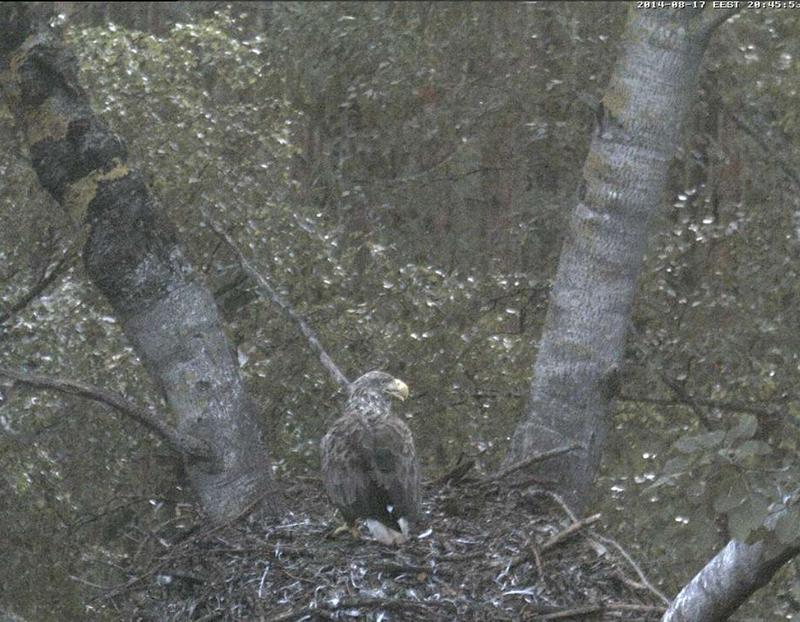 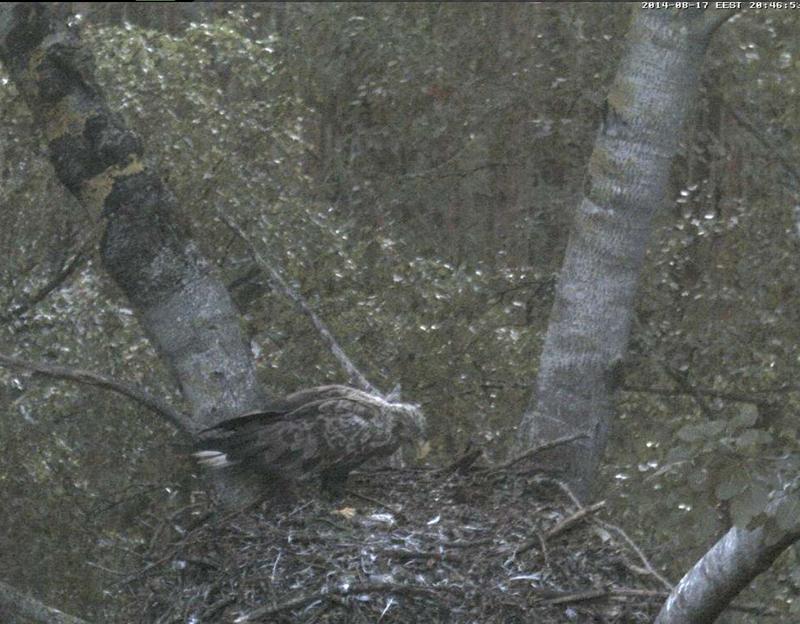 at 5:29 there was a warning call of Lubana. An eaglet, very far away has also called.

The nest is empty. Lubana is very close to the nest.
Top
Locked
4693 posts