So, after making some changes in system setup, i saw that battery reserve is down to 60%.. This year system is a bit more power hungry and batteries drain faster. So it is decided to turn off system at nightfall and will be turned on at dawn. I think that we can afford to run system 24/7 sometime in mid/late March. It depends on sunny days.
Top

That sounds like a quite sensible decision. The modern HD cams need more power as we have seen at the deer feeding place. When it is dark we can't see anything, and right now the action on the nest will be during day time. Let's hope for a very sunny and bright year ahead!

Thanks to Brachux and the team in Latvia!
“One can measure the greatness and the moral progress of a nation by looking at how it treats its animals” (Mahatma Gandhi)
"You can judge a man's true character by the way he treats his fellow animals" (Paul McCartney)

i think you could still run the system for about 1/2hour after and before dark if any way possible. last year at the previous nest the eagles used to lead a secret life especially at the edge of the dark time. they used to come to the nest and mate very late in the evenings when it was almost pitch black already. so far it seems that this couple doesn't do this but anyway i'd like to listen in the evenings if possible to hear if they are up to something... if only possible of course. Pontu pictures are of course useless in pitch black.

congratulations on the superb camera!

Schmutz, if you keep on having problems with the connections contact one of us administrators of moderators, and we'll try to find out what the problem is. (i'm afraid i'll not be much use in this but almost any other of us will be more helpful than i.)

Felis silvestris wrote:Thanks to Brachux and the team in Latvia!

Even me, thank you!

But, I think as Ame. It would be very nice if we could at least hear the sound.

Many interesting things happen in the darkness.
Top

it should be bright?
Top 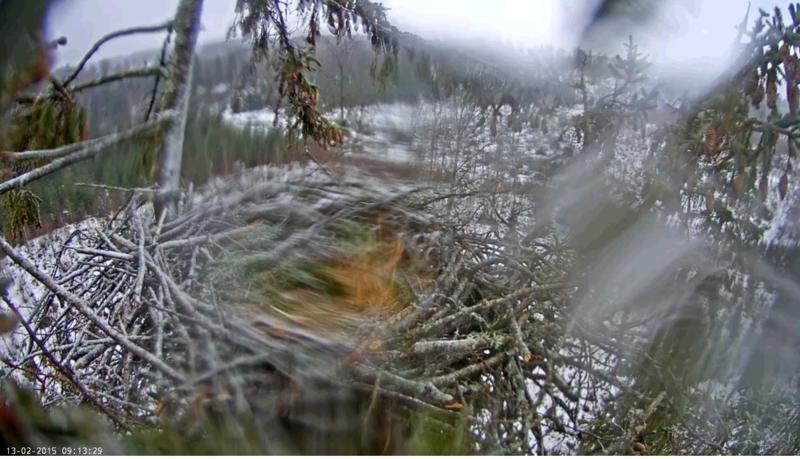 the camera is running

the view is better 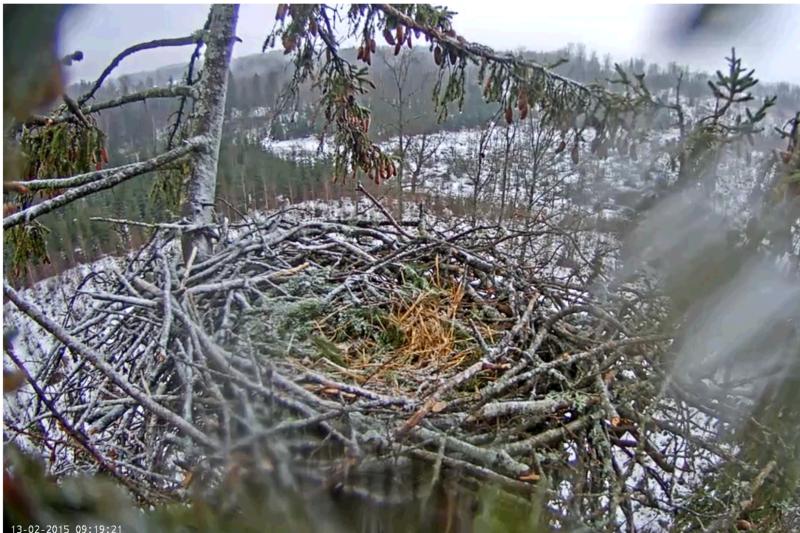 Sorry, my little mistake. Next morning camera will be on sooner.
Top

brachux wrote:Sorry, my little mistake. Next morning camera will be on sooner.

Do not worry. There is still time. There are no baby in the nest

Hope that all will be Ok today.

ame wrote:
i wonder what the little bird is, the ne that is singing close to the nest? i think i first hear a crested tit calling. then the other bird sings in a voice which sounds like the beginning of the chaffinch's song. i'm not sure can they be here already..?

I think this could be song of Marsh Tit.
Top

ame wrote:i looked this woodpecker up in the Pontu video and made a clip. it has the woodpecker's calls, too. maybe that will help to identify it (although most of them have clear sharp & loud keck's

). -the top of the bird's head seemed to have a 'round' profile. that is said to be characteristic of the D. medius.

Yes, this is Middle spotted. In video we can hear also fragment of song of Willow Tit.
Top

, that was my first mistake today- Friday 12 rather than 13

I have improved the error

thank you vainamoinen for the identifications of the birds.

i thought it was too early for a chaffinch.

the morning pictures seem to me that it has rained sleet in the morning. the winter isn't over yet. but the brook in the vicinity of the nest is burbling cheerfully.

i've checked the Pontu picture from this morning. the first was taken at 9:09, with sleet in the lens. no-one has become photographed here so far today.

i made a gif of two pictures, the last which i took yesterday and one which i took just now. i think the nest is the same, except that there's a frosting on it now. i marked two straws which are crossed exactly the same way as yesterday. i think that nobody has been there since yesterday.

Hello from Lavian Fund for Nature

In Latvian forum we have already names for our eagles

thank you ldf_ilze and welcome!

Durbe is rather obvious but did you have a special reason for selecting Robert?
Top

In Latvian forum we have already names for our eagles

that's beautiful. Now we can call them by name

Liz01 wrote:
that's beautiful. Now we can call them by name

Maybe, but it's popular men name in Latvia. By the way Durbe is a famous place in Latvian history because in year 1260 there was a big battle between crusaders and local pagan tribes. Pagans got a big victory there.
Top

I like "Durbe" very much - and "Robert", or forms of it, is well known male name in many languages.

And comfortable for forum members, no additional characters in the names

Nature does nothing in vain (Aristoteles)
Top
Locked
19795 posts