a grey-headed woodpecker is calling in the forest. this is the first time i hear it this spring.

Vicky wrote:As I opened the camera right after 7 this morning I saw male eagle stretching his legs and saw the claws that are bent backwards. Could you (who know more and have followed them longer) speculate what has caused them to bent that way? Poor thing....

Robert was first seen with an injured foot on 1st February. we have no knowledge of what happened, just like we don't know what happened to Durbe.
we noticed Robert's injury here:
viewtopic.php?p=438920#p438920
and here's a link to DD-observations:
http://dabasdati.lv/forums/viewtopic.ph ... 7&start=20

8:31 a nuthatch calls loud next to the nest. -it called for many minutes. they grey-headed woodpecker continued in the background.

9:52 a little bird came to have a look at the camera. a siskin maybe? or maybe rather a yellowhammer (female)?

ame wrote:9:52 a little bird came to have a look at the camera. a siskin maybe? or maybe rather a yellowhammer (female)?

Ganz richtig. This is a yellowhammer female.
Top

i have made some Pontu clips of the eagle visit this morning.
6:18 they arrived singing together.

the eagle on the nest was limping so it was Robert so the female was the Bride. they made some nestwork together, mainly the female dug in the nest bottom.
a video:

Bride from the balcony.

Robert right after her. he didn't want to let her out the sight.

15:34 eagle calls from very far... barely audible, a long song. two voices i think. and a buzzard calls much closer.


before the long eagle song there were some other voices from a much shorter distance. krak-krak, ... krak-krak. an eagle's voice this on, too? a young eagle's voice?

i think we heard calls like this in the winter feeding ground.
the voices are at about 7 s and 17 s from the beginning of the clip.


15:39 more eagle calls from a shorter distance than the first song. two voices again i think.

a fly buzzed near the camera a few times. this time it landed somewhere quite near. spring!

Edit: spotty under its wings.
Top

I think we have already seen it. He's nearly an adult

, very nice slideshow with images of our Durbe

She has left a huge void

Hello Durbe, wherever you are I hope you are flying happy ... we miss you.
Top

Liz01 wrote: :thumbs a beautiful young eagle :loveshower I think we have already seen it. He's nearly an adult

it is big! the size makes me think that it's a she rather than a he.

i'll make a Pontu clip of its visit tomorrow and post it here.
i have no recording of my own because i had such an awful connection this afternoon. it was all in bit and piece shorter tha 2 min. and then Windows wanted to update etc... all late afternoon went like that.

I miss Durbe also. I have long hoped that she come back! 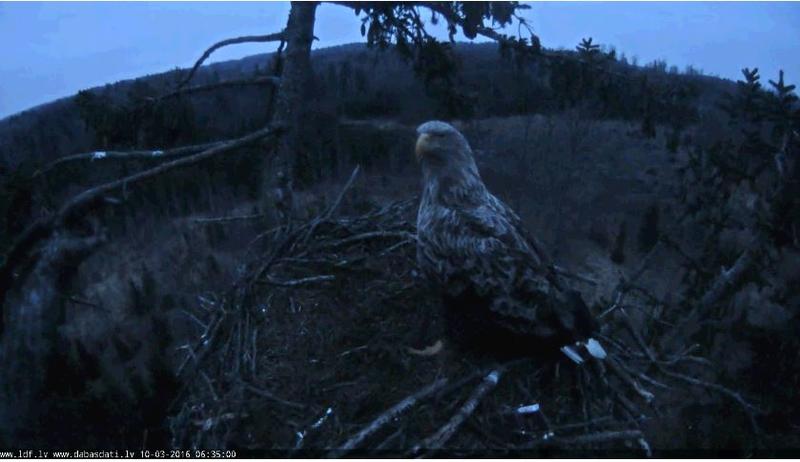 6:44 Robert tries to dig the ground

the Bride came in, without a word 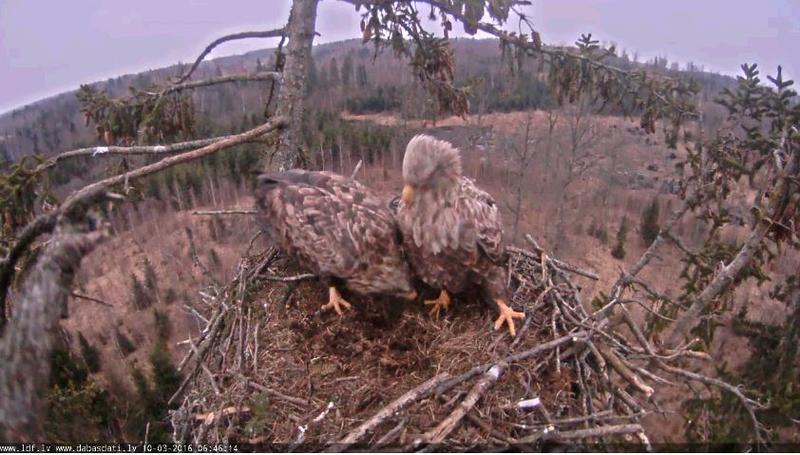