i made some clips from this evening. i could not find the two birds which Abigyl wrote about but i guess they weren't eagles otr anything else special because the male didn't seem to mind them.

15:56 the female came in and called. then they did some nest work.


16:55 the female flew away.
edit: i read in the DD that she returned a little later so i made a longer clip. she landed on the tree top.

he had been waiting a long time.

17:41 some wood pigeons and ravens flew by. pigeons landed on the nearby tree.


17:43 a black woodpecker called. then the female came home and called, too. then both made some nest work.

good morning!
the camera started at 6:23. it's already light. a blackbird and also other birds are singing. there's no wind.

6:27 the young couple arrived with calls.

6:28 a mating attempt. the male tried hard with a lot of calls but i don't think that they made it.

they are very early.
Hopefully there will be a day without struggle for the nest 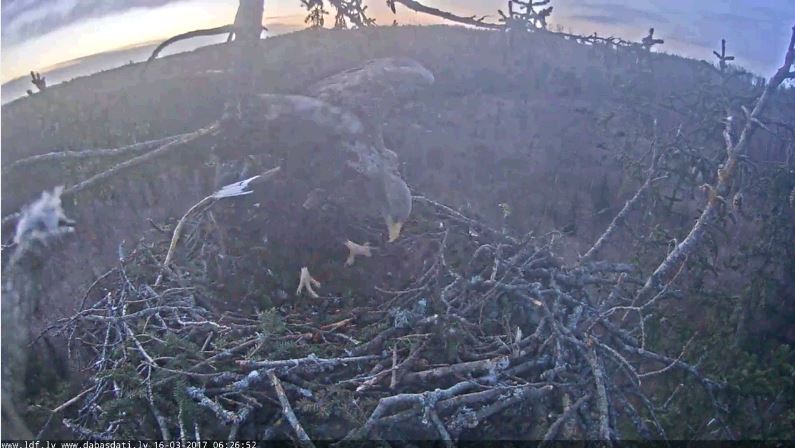 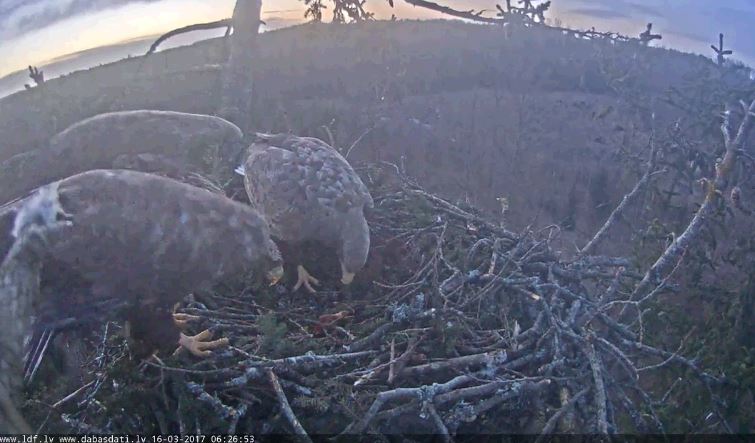 
6:35 they were talking in the forest. after that a pause and then i think a black woodpecker called.

i agree: i don't need any of these "busy" days.
Top 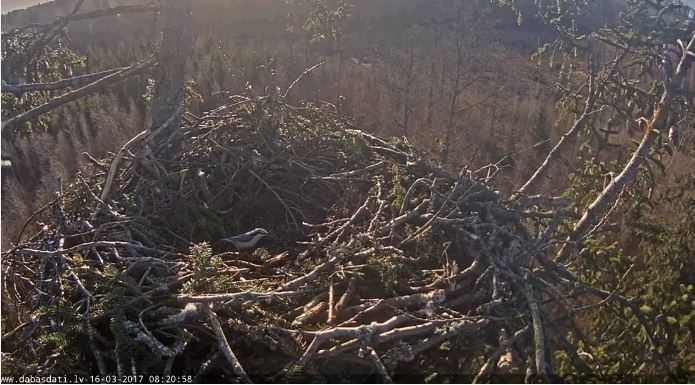 8:23 a spotty-bottomed eagle with B&W tail came in quietly.


the light is bad at this time of day.

i don't know who it is. it has not said anything yet. i took a snapshot of it when it got up to the branch.

these are the tails of the females who were in the 12:30-fight.
first the 'right' female (the male's girlfriend)

then the 'wrong' female, the one who made the attack. the eagle on the branch now looks more like the 'right' female.

btw: neither of these is Erna. she had an anchor-like pattern on her tail.
Top

9:06 someone is rattling downstairs... it sounds like a squirrel. it was a squirrel! it came up and had a look at the eagle.

it also made a squirrel voice, the one that sounds a bit like Marge Simpson hmrrr...

Why is it so? Because of morning haze? (I don't know the weather in this part of Europe).
Top

it's the sun shining directly into the camera. (actually just on top of it)
it will get better once the sun gets higher.
Top

EDIT: Ame, thanks for the pictures of the tails. It is the desire, to see Erna again, which is why I suspected she could it be. But Erna has an almost white tail.
Top


i can't remember what Erna looked like... the very first new girlfriend that Tramp had after Lady was an anchor-tailed girl.

9:37 another eagle came with some food. the female tried to grab it but the eagle flew out with the food. female followed. now it's complaining in the forest about not getting it.

I have a nice picture of Erna's tail at home. I will set it here after my work
Top

some calls. ... and the female came. she is still hunting the food and the male is still reluctant to give it away. this is not the right way to woo a female.

9:55 a white-tailed eagle came to the branch and cleaned its beak. i guess he has managed to eat his food.