Thanks for welcoming me, and for your kind reply to my worry about the health of Karl, the principal assistant of nesting of the BS family.
It is relaxing to read, that this behaviour is rather a rule than an exception. As you say, there might be a more general reason to it and, hence, the bird species may have adapted.

I have now seen it three times altogether, simultaneously being capable to identify the fish species, or at least I think I could do so.
The fish is perch, which is quite a sticky animal in close surroundings like fishnet of a human or crop of a bird. When it dies it spreads its back and head spikes and can move only ahead. It cannot be drawn out or regurgitated the other way. Have you any observation of other fish species in connection of this prohibited regurgitation?

Why it happens close to the end of the nesting period? There might be several reasons. Of all these it is familiar to me that this is the time of the year when perches have recovered from their mating stress in spring and left deeper waters, pack hunting juvenile fish flocks in shallow waters, where BS may catch prey. I can imagine that a flock of scared youngster fishes escapes almost to dry land to avoid being caught by a perch pack and there a BC can rapidly fill its crop with small fish. Finally it may catch a perch, its tail almost out of the beak. And there it sits fast. The BS must consume it by itself in a normal way. Why they then take this fish? My guess is that because it is good food, containing much protein. It also tastes good, at least in the mouths of human family members, so why not by the taste sensors of a BS.

The previous is layman's fictive explanation. The scientific truth may be something else.

Thanks for all who have made it possible to watch BS family life abroad via internet.

Having watched it for the first time, I have learned a lot of these big birds during this summer. I wish success in continuing your efforts to study their life and hope that these bird individuals can survive their next year, returning back to the north when the winter has gone. They have become almost our family members after having been electronically displayed and heard in the corner of our living room all day and most of the night.

Thank you so much for your kind and very interesting reply, kuhankeittäjä!

You could be right!

Probably some fish species are much harder to regurgitate than others.
It is very well possible that a perch can only be regurgitated in the right direction: head first.

It is a very good idea (to try) to observe which fish seems to be stuck in the troat!
Till now, I did not do that.

So I am unable to tell if it was always a perch that caused this regurgitation-problem, or if it also occured with other fish species.

EDIT: Unfortunatly, I do not know much about fish. Please feel free to help recognising them, kuhankeittäjä!

Here is a picture of a (very big) perch. I can imagine that those dorsal spikes can become problematic during regurgitation! 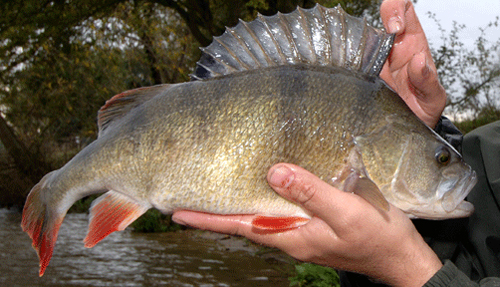 And a smaller one: List of Freshwater Fishes for Estonia:
https://fish.mongabay.com/data/Estonia.htm
“Clearly, animals know more than we think, and think a great deal more than we know.”
— Irene Pepperberg
Top

Nice to see you here because your pseudonym tells me that maybe you're from Finland (like me)? And just like you, I've been staring this great BS-family all this long hot summer. I also hope safe migration for the whole family and safe return to north next year.
Top

Anne, it was written here by Hellem (?), that nature is 3 months ahead.
So the accumulation of problem cases could explain, the perch come to the surface earlier ...

There will be several variations, why feeding takes so long or does not work!?
https://www.looduskalender.ee/forum/vie ... f=65&t=945
Top

Well, it was a Northerners, whoever: Do you not think it is correct? 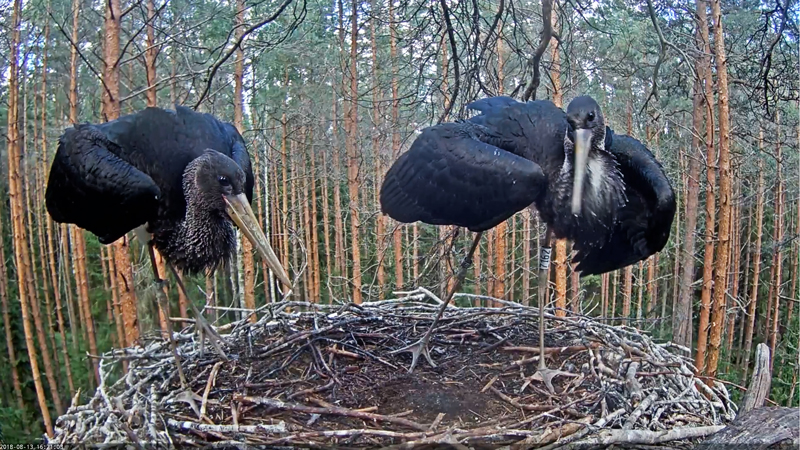 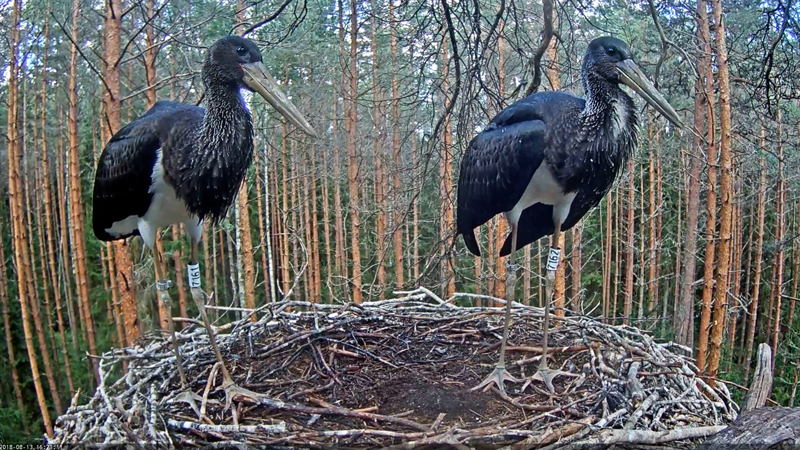 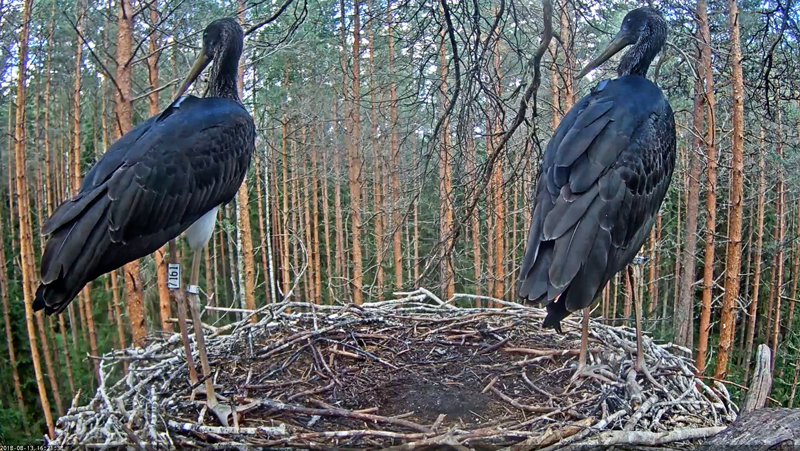 So far, only one feeding today...
Is it time to leave the nest?
“Clearly, animals know more than we think, and think a great deal more than we know.”
— Irene Pepperberg
Top

I would imagine that this perch can hurt Karl during vomiting. He is careful, he avoids pain reflexively.
https://www.looduskalender.ee/forum/vie ... f=65&t=945
Top

Oh thank you very much, that could be the solution to the riddle, unfortunately Karl does not think so complex and lets the perch continue to swim

Because the free time bite fishers pay interest on perches during their pack movement during late summer, I first thought that some of the many lost spoon bites of them had ended inside Karl together with a wounded perch. However, this phenomenon seems to get repeated from year to year, and thus may be explained by some other reason(s). Otherwise the BS's were collecting spoon bites inside them, which is not a plausible solution.

Why then some or even most of the perches get regurgitated in a proper way head first out, evidently after having been swallowed head first in? Is BS capable of turning them somehow? Or does it swallow them alive enough, so that the poor fishes still are capable of orienting themselves in the direction where they may swim out? A perch don't die easily, it's not a prey, but a predator with an armour outside. It may try to save itself, even from the crop of the stork. Anyhow all of them seem to be dead when regurgitated to the nest.

I now have the following considerations:
The reduction of feeding will have several reasons. This year, the increased fish death could be due to the heat, also a reason. (The perch are eaten dead)
https://www.looduskalender.ee/forum/vie ... f=65&t=945
Top

Nice to see you here because your pseudonym tells me that maybe you're from Finland (like me)? And just like you, I've been staring this great BS-family all this long hot summer. I also hope safe migration for the whole family and safe return to north next year.

Nice to know that you are from Finland!

Sure, I am from Finland, too, and for a long time have spent my vacations in a county where kuhankeittäjä (Eurasian Golden Oriole) has been voted to the feathered symbol of the region. There are also ospreys, trumpeting swans and cranes to be regularly seen, among the others. and much wild nature, appropriate food and some big trees for BS:s to rise their young, in case. The county locates south of 63 north. At comparable latitudes of Siberia live BS populations. According to literature we have had BS nests in Finland around 200 years ago. Unfortunately they don't find their way in couples here any more. But maybe it happens some day, when the Estonian BS population has increased enough. The old Finnish name of BS is musta tuonenkurki as compared to the estonian name must-toonekurg.

18:20 Karula and Päike are in the nest. They are both 86 days old today. "Hotel Daddy" seems to please them too much.

When will they finally fly? 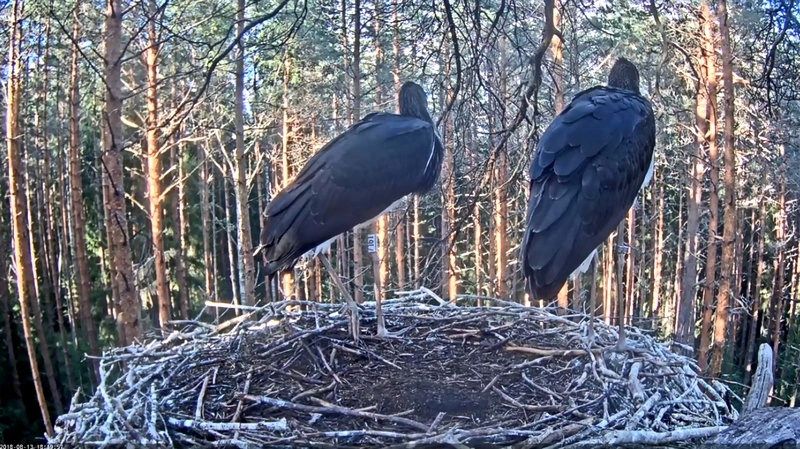 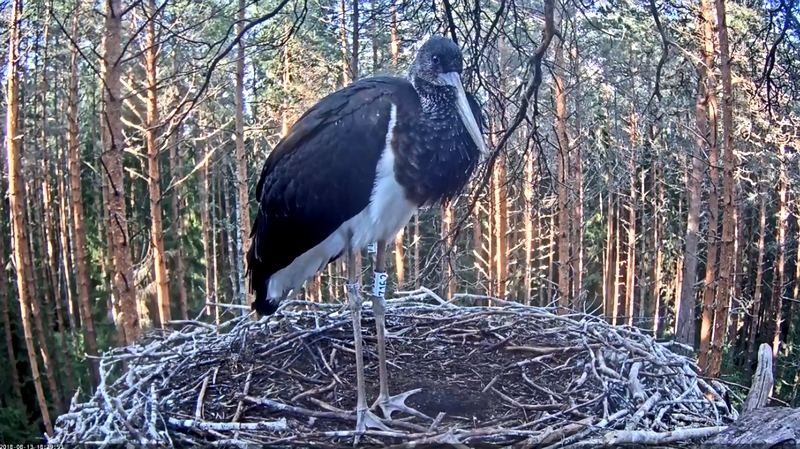 I suppose that, one day, Karl will stop bringing food?
Swenja, I believe they are 85 days old today.
“Clearly, animals know more than we think, and think a great deal more than we know.”
— Irene Pepperberg
Top

Here is a picture of a (very big) perch. I can imagine that those dorsal spikes can become problematic during regurgitation!

And a smaller one:

Thanks for the pictures of a bigger and smaller perch. The dorsal fin is open in both with its sharp needles clearly visible. The right lilac cover ( lat operculum) is also visible but not open. Its back most edge forms a sharp tip which easily penetrates the skin at human hand, when a perch catch strikes back to get free. Open right and left cover tips and dorsal fin spikes establish a tripod which strongly resists backward movement in a tight channel. Hence, if the perch succeeds in turning, it cannot be swallowed further. If not, it resists regurgitating. 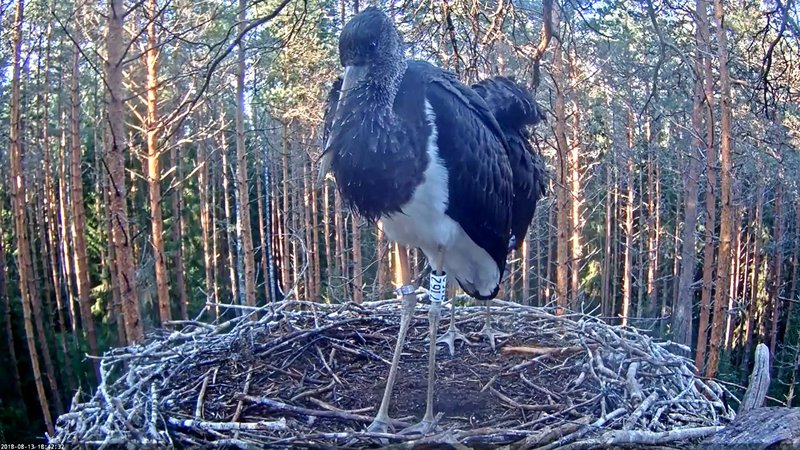 Swenja, I believe they are 85 days old today.

Include end date in calculation (1 day is added) Today - Did I check in your online calculator.
Top

Oh, Ok! I never include the end date.

It is a bit difficult to explain why I prefer not to add the end date.
For example: if we include the end date in our counting, a week would be 8 days instead of 7.
Or, another example: if a chick hatched today at noon, it will be exactly 24 hours (= one day, not two days!) old tomorrow at noon.
“Clearly, animals know more than we think, and think a great deal more than we know.”
— Irene Pepperberg
Top

It is a bit difficult to explain why I prefer not to ad the end date.
(For example: if we include the end date in our counting, a week would be 8 days instead of 7)

Well, then they are both 85 days old today.

I now have the following considerations:
The reduction of feeding will have several reasons. This year, the increased fish death could be due to the heat, also a reason. (The perch are eaten dead)

This sounds reasonable. When a perch dies by suffocation (like in shallow ponds), its lilac tips point outwards and the colour of the fish is lighter green than normally. The red colour of the swimming fins and stripes in green colour are retained. I imagined to observe the lighter green colour in addition to the view of the fish from stomach side, the beak being on the other side. Hence they were positioned like stuck at the dorsal side and either left or right sides or both.

Although I have not participated to this discussion earlier, I agree.

Thanks, I do not want to be rude.
I know the behavior of the old storks from long-term observations of white storks. These had but little fish on the menu.
That's why I'm looking for alternative reasons. The language barrier does not let me express all thoughts.
I have not learned the English language and can only write in short sentences. 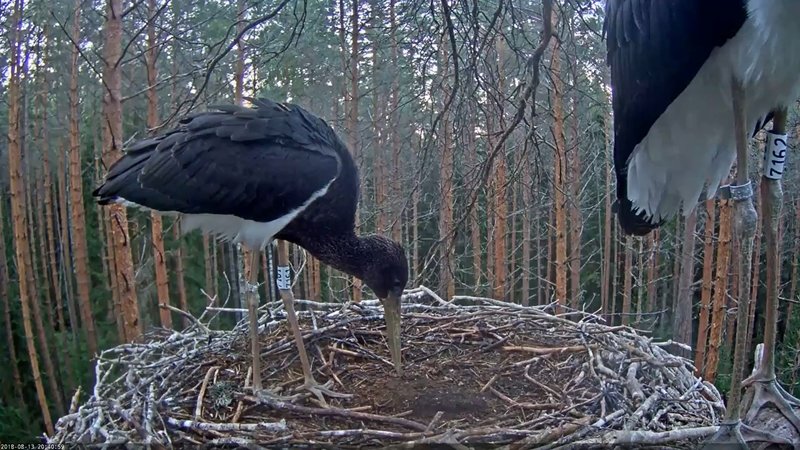 Good Night in the Karula Forest

Thanks for the answer!

Nice to know that we also have had Black Storks sometimes in the past here in Finland.

Maybe they have so good nest, and at least so far so very good food, that they think it's useless to migration anywhere.

Where is Maru now, is there any new updates?