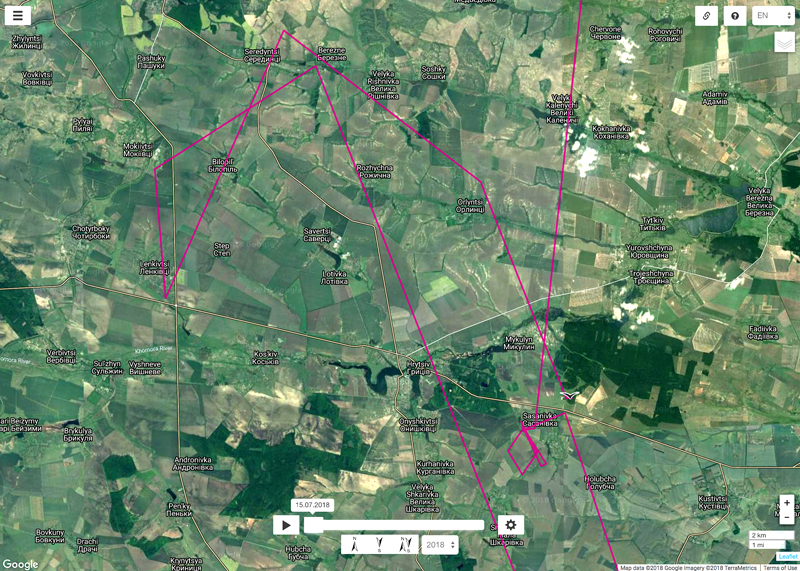 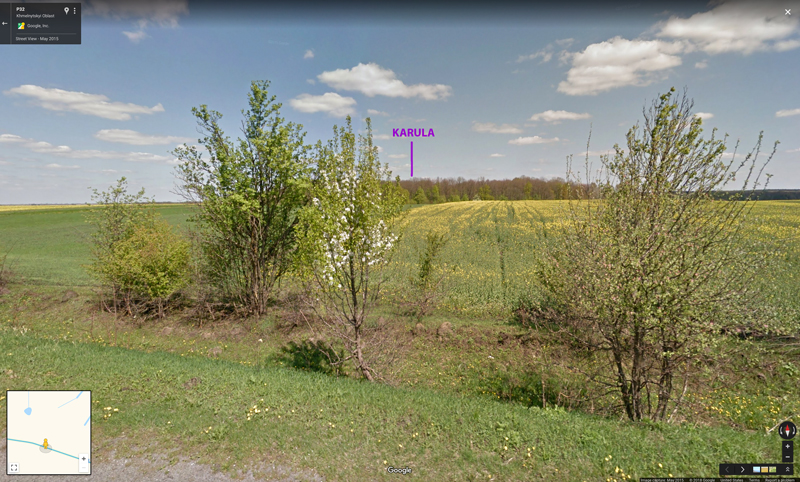 Urmas wrote: ↑
August 26th, 2018, 11:23 am
For Black Storks data interval on migration map is 30 min. More data will suspend map performance too much.

Thanks a lot for this useful piece of information!

Hence the corner points of each migrating bird path present past localities of that BS twice an hour. Whether it was airborne, grounded or sitting in a tree has to be concluded from aerial background images and how close the other path corners are. Where the BS truly has been between these snapshots can only be imagined.

Thanks for all providing illustration to the stories. Be the thermals with the BS family members. 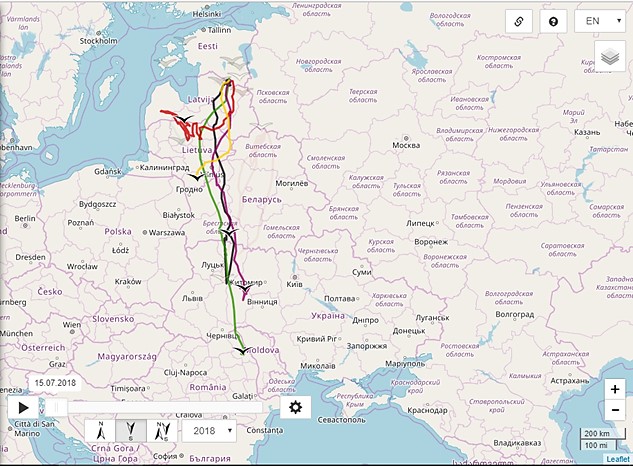 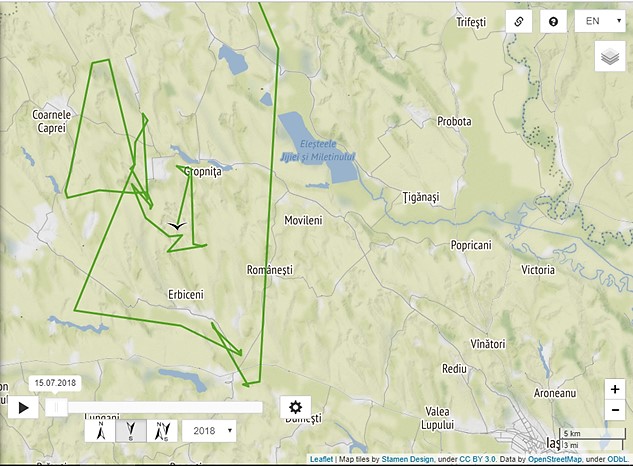 Earlier, I wondered why Karula turned back. I was informed that the reason was not because it had caught a smell of plenty to eat. OK. I am not completely sure that they don't smell anything, but let's leave it and try to find some other reason.

The magnetic sense seems to be a generally accepted talent of the BS. Hence I made an overlay of the migration map on the World magnetic anomaly map, which features minor total field deviations from the main field. The main field dominates the direction to which the magnetic compass points. This WDMAM, however, shows deviations on the strength of the influence of magnetic field to the compass rather than the direction of the field.

Generally the magnetic field strength decreases southwards in Europe. But in localities where WDMAM is coloured red it may increase when flying to the south. Blue makes the decreasing of the field stronger than normal. All this on average and the changes may be more dramatic at migration flight altitudes.

As was said already, I compiled an overlay of migrating Karls family + Eedi on the WDMAM. What can be observed from it: At least some storks seem to return back from blue area to red and stay there. Päike tries to follow higher magnetic field areas to find its way towards the sun. Does this mean, that they have to adapt to lower magnetic field for some time to feel safe to fly further?

Please find the overlay below

Thank you for the pictures

Hi, if Maru will stay in latvia, will she/he have a chance to survive the winter in latvia?

thank you.
it is not easy to stay calm

Sometimes it's difficult to say what I mean in English when I really do not know how to say it, and therefore I can be misunderstood. But I can say that I do not know nothing about transmitter- and coordinatepoints, so I'm happy to just look at the BirdMap-views without any complaints.

Thermals? "By using thermals , gliders can stay aloft for hours without using power."
Is the idea appropriate also for "our" BlackStorks?

Remark: the links do not seem to work !

Magnetic fields. "The magnetic sense seems to be a generally accepted talent of the BS,"
That's very interesting, but I do not get this lhttp://www.wdmam.org/ link open...
However I got it open with the second trying, and do not understand nothing.

why not?
"A broad-winged soaring bird, the black stork is assisted by thermals of hot air for long-distance flight, although is less dependent on them than is the white stork. ..." wiki 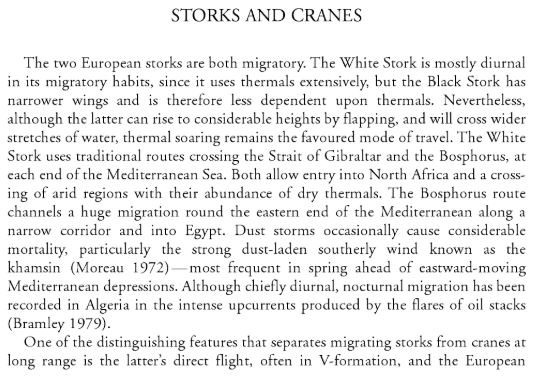 Thermals? "By using thermals , gliders can stay aloft for hours without using power."
Is the idea appropriate also for "our" BlackStorks?

Aircraft designers have this idea of the storks and ..... 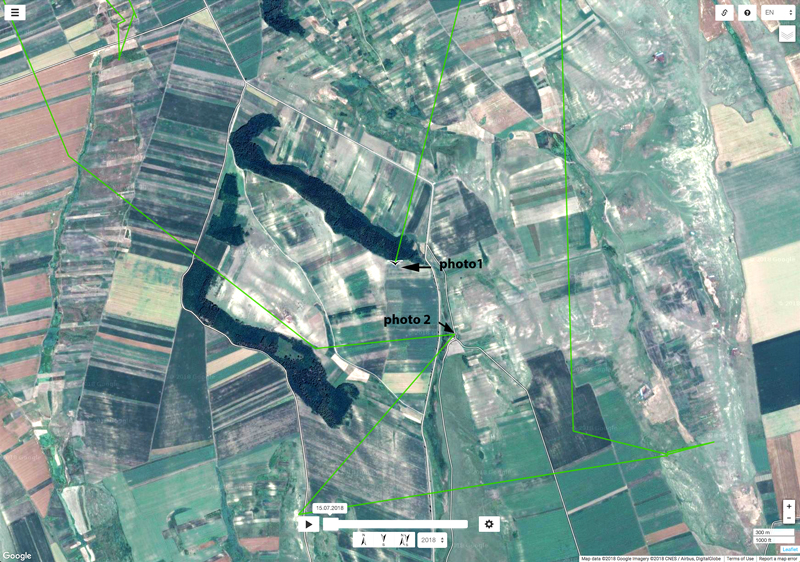 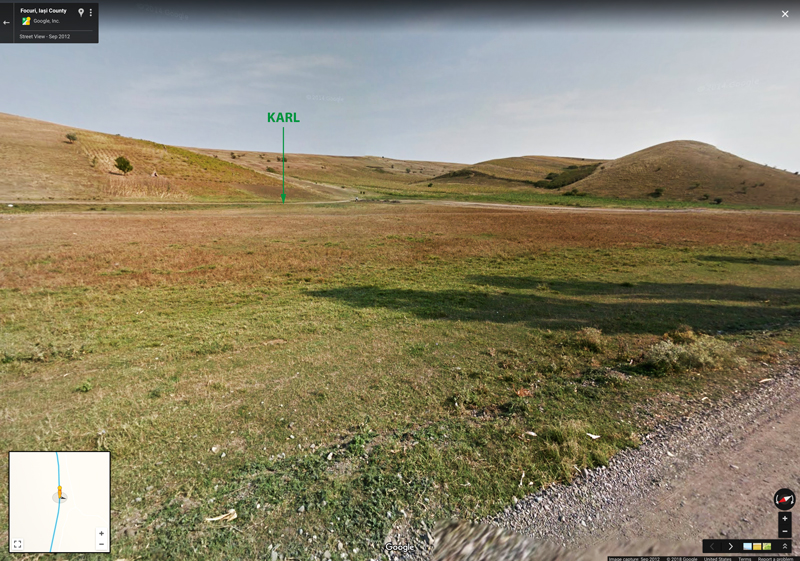 "How migratory birds find their way" is still not (completely) understood by scientists.
Some interesting articles about bird migration:

http://www.educapoles.org/news/news_det ... _their_way
How do migratory birds find their way ?
"This question still interests many scientists. It has been showed that birds use several orientation tools.
They can use the sun, for example, which means that they permanently "know" what time it is, in order to know the right direction on the basis of the sun's position. They are also sensible to the ultraviolet rays which penetrate the clouds but are invisible for human beings. (So they see the sun's position also on a cloudy day.) Even the nocturnal birds use the position of the sun at sunset to know their position.
Nocturnal birds also use the stars. This has been proved by letting birds fly in a planetarium and changing the stars' position.
Another tool is the earth's magnetic field (earth's north and south magnetic poles). Some birds, like pigeons, have a small zone in their brain made of magnetite (magnetic mineral), just like a small compass. But other scientists think it's rather in their eyes that some birds have a system which indicates them where the magnetic north is...
Of course, (experienced) birds also use their knowledge of the landscape: they follow rivers, valleys or roads, or locate themselves with particular mountain peaks.
Other tracks are still to be explored. For example, it seems that some birds could find their way by following their sense of smell. ..."

http://theconversation.com/migrating-bi ... nces-82624
Migrating birds use a magnetic map to travel long distances
"Birds have an impressive ability to navigate. They can fly long distances, to places that they may never have visited before, sometimes returning home after months away.
Though there has been a lot of research in this area, scientists are still trying to understand exactly how they manage to find their intended destinations. ..."

https://www.scienceabc.com/nature/how-m ... field.html
Vision-based magnetoreception
"One of the more complicated theories to explain avian migration involves bird species’ ability to detect the magnetic fields of the Earth, and subsequently follow those fields to their ultimate destination. This ability to use “invisible” waves was hard for some ornithologists to swallow, but it was proposed that some bird beaks contain magnetic particles that act as a compass. Recently, this theory has fallen out of fashion, replaced by the theory of vision-based magnetoreception.
The concept of vision-based magnetoreception means that birds can “see” magnetic fields and align themselves with the direction of the field they want to travel. If a bird is migrating south, it will align with a south-facing magnetic field and be on its way. Experiments in laboratories have actually generated artificial “magnetic south”, and birds moved in that direction. ..."
A Quantum Explanation?
"The last great mystery to vision-based magnetoreception is how this sort of magnetic field sensor can be present inside a bird’s retinal cells. One of the most recent theories suggests that quantum mechanics may provide the answer. For such a detector of strength AND direction, some mechanism would need to be in place to amplify the relatively weak magnetic effects of the Earth enough to be detected.
In quantum mechanics, a radical pair consists of two simultaneously created molecules, each with one electron of opposing, associated spin that makes these pairs highly sensitive to outside forces and magnetic fields.
When a specific light-sensitive protein found in the retinal cells of birds, cryptochrome, is exposed to certain wavelengths of green or blue light, it can organically create these radical pairs. Magnetoreception like this is the latest field of quantum biology, and one that is currently being studied around the world."

A recent, interesting article about bird's senses of smell and taste:
http://www.startribune.com/turns-out-bi ... 485946142/
Birds’ sensory lives are very different from our own.
Turns out birds can smell and taste after all.
"Recent studies show birds have a broad sensory palette, shooting earlier theories out of the water. ..."
“Clearly, animals know more than we think, and think a great deal more than we know.”
— Irene Pepperberg
Top

I find this very fascinating, and the more I learn about it, the greater my respect (and admiration) for birds.
“Clearly, animals know more than we think, and think a great deal more than we know.”
— Irene Pepperberg
Top

Has Maru started moving?
And Päike, is she already in Belarus?
Top

Thanks for the positive feedback!

Without any feedback, it is impossible for me to know if you, readers, find my posts useful or not.

I think he/she did!

Maru is near Dirgaičiai, Lithuania 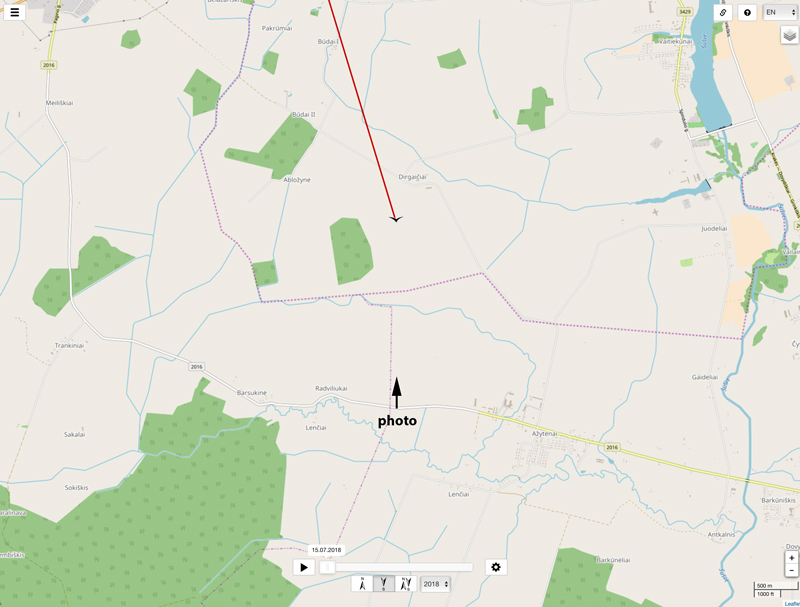 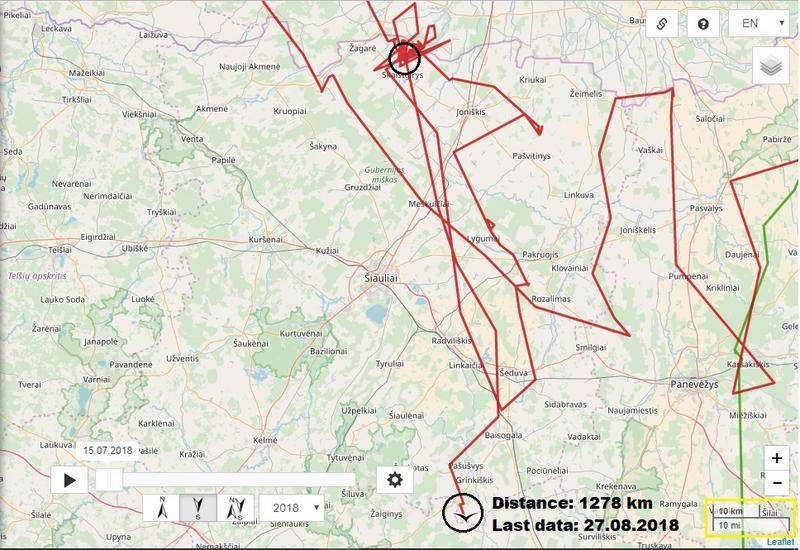 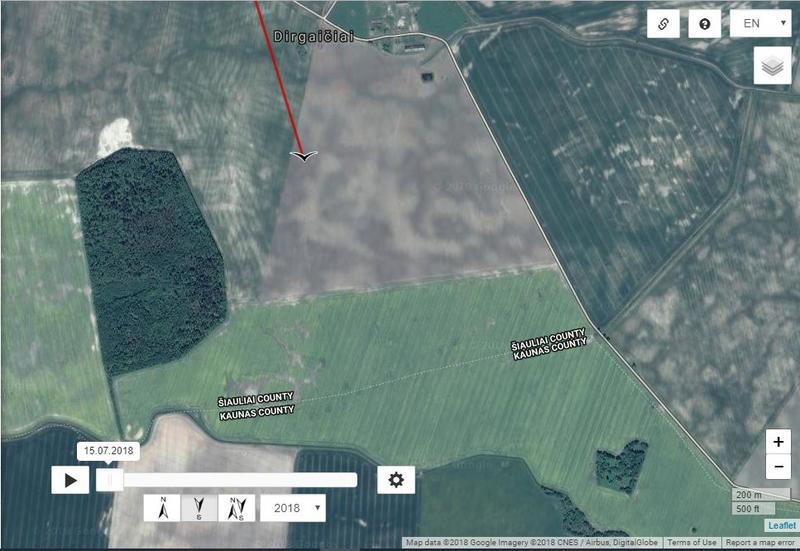 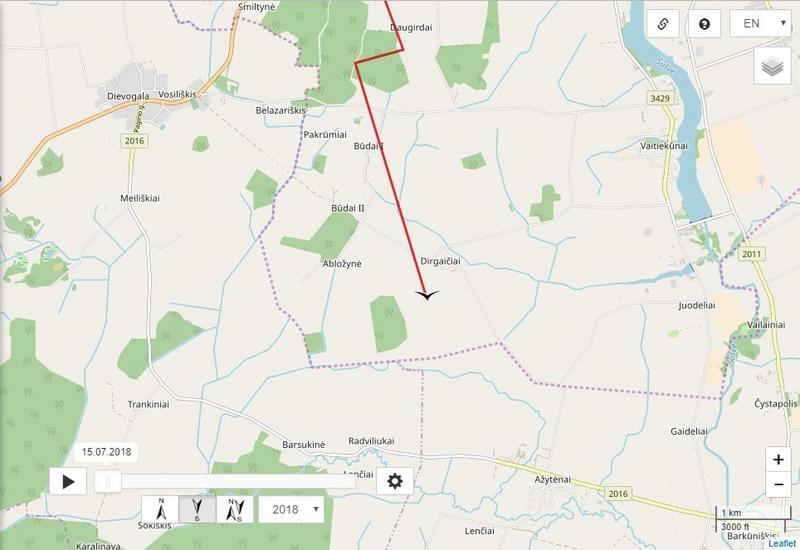 and thank you to both of you!
Top
Post Reply
9110 posts