Perhaps, they together catch fish?

Today life of eagles occurs on the top branches, generally.

13:10:40 an eagle called in the forest not very near. it sounded like a male.
with bigger volume (louder sound) i heard also a female voice.
https://youtu.be/cGNuGRJZQ9E

they felt that they needed to declare that this forest is theirs.

i think this had to be the Moon. it is was a rather thin crescent. the times in these pictures are UTC times. local time is 2 hours more. 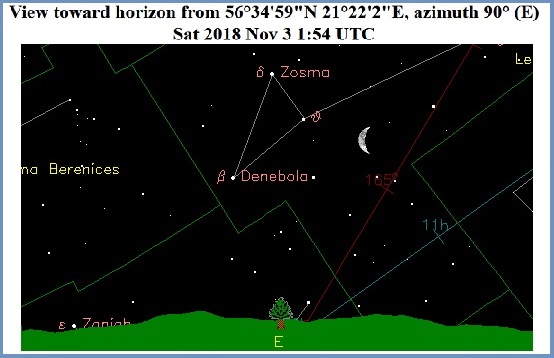 tomorrow morning the Moon will be even thinner. it took me a while before i found it.
so this picture below shows the sky at 5:30 local time. 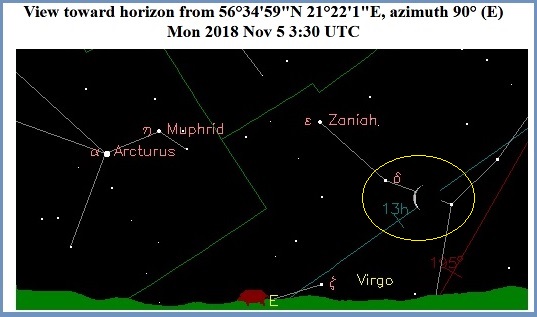 Adventures of the timid but persuasive guest.
Stamps from above and at 10:02:31 departs.
https://youtu.be/WtofpRq1rKg
At 10:03:25 departs from a fir-tree on the right and arrives in a nest.
(don't ask why I have pressed the "stop" button

We will cease to see these branches again soon. 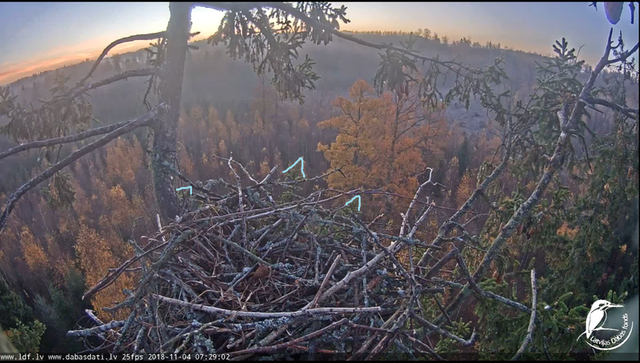 By the way, today I made entries with Liz01 settings. Somebody has noticed a difference?
I hadn't liked artifacts from sunshine. I will write down in the MKV-format again.

ame wrote: ↑November 4th, 2018, 5:50 pm i think this had to be the Moon. it is was a rather thin crescent. the times in these pictures are UTC times. local time is 2 hours more.


tomorrow morning the Moon will be even thinner. it took me a while before i found it.
so this picture below shows the sky at 5:30 local time.
https://up.picr.de/34254846st.jpg


Thanks for explanation, ame.

For me it looked like full moon. I thought it was just full moon and now full moon again.

good morning!
light is coming and also colours begin to come out of the grey landscape. the new parents' oak begins to look yellow instead of being a grey ghost in the dark. 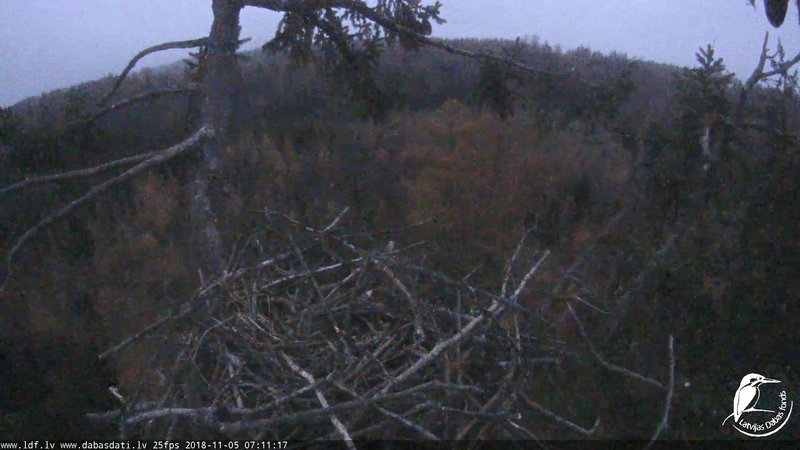 07:58 Swans are flying to their "working place"

the eagles seem to stay away today. so there is time to return to this old discussion. i'll leave the pictures here, too, because they are so far away. i have cut here Sonchik's post in several pieces and comment each piece separately. i hope it will be clearer that way. 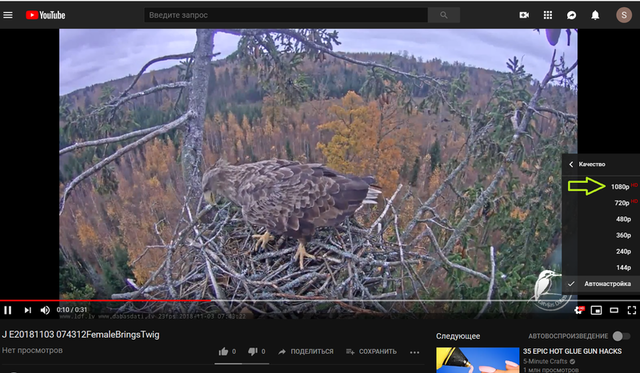 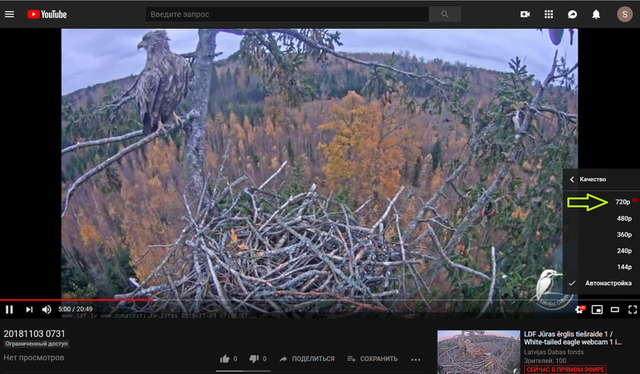 i try to record screen with 1080 px-resolution whenever that is possible. it must be HD, otherwise the picture is 'misty'. - the resolution of the stream on Youtube does not, of course, effect the resolution of Potplayer recording.


Sonchik wrote: ↑November 3rd, 2018, 2:58 pmI tried different formats and now I use the MKV-format too. The best quality turns out. I have such settings: 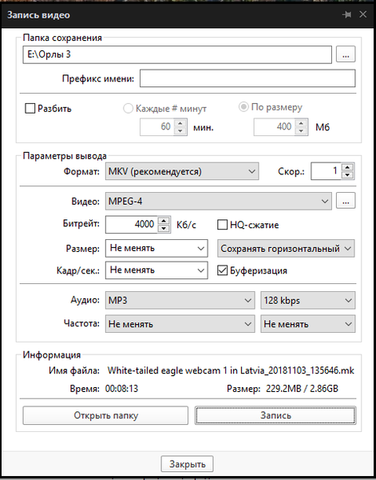 
Sonchik wrote: ↑November 3rd, 2018, 2:58 pmFor capture of the screen I use PotPlayer too. On the same settings that I have shown and in the MKV-format it is natural.
I am afraid that my computer won't endure one more program.

is it possible to record screen with Potplayer??

i didn't know that. i must try to learn how. i don't like aTubecatcher. with aTubecatcher i can't do anything else at the same time. it is so stressful!

Sonchik wrote: ↑November 3rd, 2018, 2:58 pmThe problem is that as soon as I include record of the screen, YouTube begins to twist a scrolling wheel - there isn't enough computer power. It is necessary to reduce quality of viewing. As soon as I switch off record, YouTube begins to show well.

are you recording sound with the microphone? then the sound will become bad. it will record all the sounds in the room, tapping on the keyboard, squeaking of the chair, TV or radio in the background, your sneezes, everything.

with aTubecatcher i must choose to record sound with Realtek's stereo mix audio device as sound recorder. i also have to turn off all other sources of sounds.
Top

Sonchik wrote: ↑November 4th, 2018, 6:37 pm ... By the way, today I made entries with Liz01 settings. Somebody has noticed a difference?
I hadn't liked artifacts from sunshine. I will write down in the MKV-format again.
...

Liz settings? what are those?

welcome in the help thread

ame, I've found Potplayer settings..
I think you can also do screen capturing. That's new for me

(I have to read ... I see only the pictures at the moment)
I'm afraid that the whole screen is meant. Not just a detail

EDIT.. you can fix a area My settings are the same as your's

here you can read, how to use Potplayer for screen recorder:
https://www.journeybytes.com/2018/01/ho ... rding.html
Top

11:23 Big wing flapping nearby. I heard it for the second time in a very short time. Could have been an eagle.

It was a Raven (eagle raven - a very new species)

yes, it was a raven on both occasions.


edit: i found out how to resize the picture area, but i haven't found out yet how to record.
i'll look at the instructions that you found, Liz.
edit again: it seems that i have made some recordings after all. now i'll have to find out how i made them.

Ame, I think it's to use like all screen recorders. You will not be able to do anything else when the recorder is running.

the advantage in using P-player would be that it can record in MKV. that makes a huge difference in file size. the factor of reduction is about 10.

edit: the size difference was not quite as drastic as with factor 10. it was close to ratio of 1 to 2.
see below.
Top

yes, the delayed recording with Potplayer seems to happen more or less in the same way as recording live stream with P-player. the important thing to remember is to mute the sounds of all other sources of sound on the computer if they are running at the same time, for example the live recording if that is running, too.

the selection of the area to be recorded is about the same as with the aTubecatcher.

it's something to keep us awake today.

edit: i copied this off-topic discussion to the topic where it belongs:
https://www.looduskalender.ee/forum/vie ... 34#p621134
i'll leave these notes here, too.

on the left the coal tit and in the middle of the nest the nuthatch. 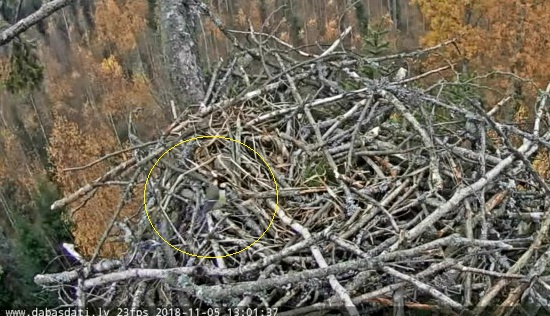 in the beginning of each video there's some rubbish which i could not trim away.

i made a comparison of the two screen recording programs. on the left side is Potpalyer and on the right side aTubecatcher.
the difference in file sizes is not as drastic as i remembered but anyway: Potpalyer makes smaller files in MKV-format than aTubecatcher in WMV-format.