ame wrote: ↑
November 5th, 2018, 10:38 am
i try to record screen with 1080 px-resolution whenever that is possible. it must be HD, otherwise the picture is 'misty'. - the resolution of the stream on Youtube does not, of course, effect the resolution of Potplayer recording.

Perhaps, I haven't understood your words. You wrote:

I have noticed a difference on YouTube. With big bitrate more accurate image.

Then it is possible to include any sounds on the computer.

Now just I remove a sound of other sources, it doesn't stir record of stream video, all the same the sound will register.

When I watch the records on the computer, I hear a sound from a set of details. When I load this video on YouTube, I can't catch a part of sounds as though they are blocked by hindrances.
Now I write down a sound with the maximum frequency, on the advice of Liz01. It is visible from a screenshot above.

In this message Lise gave the settings. Originally the screenshot contained also setting up video. Then Liz01 cut off them, but I have managed to use.

Sonchik wrote: ↑
November 5th, 2018, 2:43 pm
That is, your records were squeezed by YouTube. I have shown that your record has permission of 1080p. I have shown the my record for an example that YouTube shows only options for this record but not all possible options.

no, i think i didn't understand you first. i did not understand that you were talking about recording from screen. then it is necessary to have maximum resolution, i.e. 1080 px.
i meant that the videos recorded in this size will be compressed to smaller size in the Youtube. i noticed this when i had to record one of my videos back from the Youtube. i had lost the original from my computer. the video which i got was smaller than the original was.

aha, that makes sense. i have only tried to see the difference on my computer in screenshots if i remember right. that was when i identified the dating eagles.
how much better is the quality with bigger bitrate? is it worth the bigger size?

i hate having to learn new tricks when i need things to work right now and at once! presto! If you use the chrome browser you can upload an add on - screenshot. It is very helpful. Best pictures

if the original is lower than 192000 then it is no use trying to record more than there is. the original is the most one can get.
one cannot make the resolution artificially better than it is.

the result is the same as i have had when i have tried to manipulate dark videos to see what happens by increasing contrast and light level. the success has been zero: what is black is black and remains black. i can't stuff more photons in the video afterwards.

one other setting here is different from mine: the video-codec. i have MPEG-4 which is the default. i hardly know what "codec" means so i can't change it either.

ame wrote: ↑
November 5th, 2018, 3:23 pm
no, i think i didn't understand you first. i did not understand that you were talking about recording from screen. then it is necessary to have maximum resolution, i.e. 1080 px.
i meant that the videos recorded in this size will be compressed to smaller size in the Youtube. i noticed this when i had to record one of my videos back from the Youtube. i had lost the original from my computer. the video which i got was smaller than the original was.

Sonchik wrote: ↑
November 5th, 2018, 4:09 pm
Perhaps, it depends on a way of downloading. When I download rollers from YouTube, they met quality 1080p

how do you download videos from the Youtube?
i copy the address and open the video in Potplayer. then i record it. is there a more clever way?

Sonchik wrote: ↑
November 5th, 2018, 4:09 pm
Did you read this information? There just councils about codecs and formats of video and audio for loading on YouTube.

i suppose the same things can be found here

i changed my video codec to H.264, the same that Liz seems use. i don't know if it makes a difference compared to the default MPEG-4.
the audio codec AAC-LC is not found in my Potplayer.

coaltit vs. nuthatch 13:01
the nuthatch wears a small black with white edging (underneath)!:

good morning!
it's a misty and nearly calm. kroo- kroo, kroo-kroo said a raven somewhere not near.
Top not Raimis and not Milda 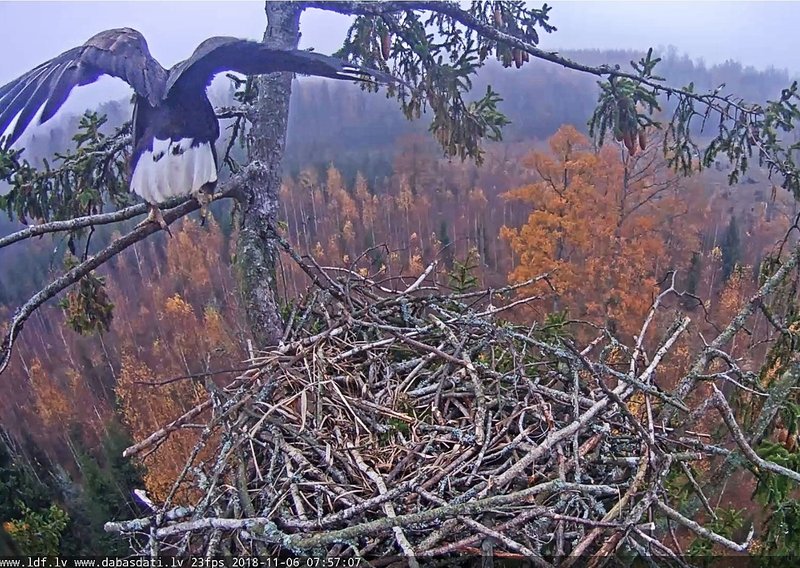 After checking the live again, I changed it to Raimis.

Their colors during morning hours, are confusing me

I will take a look in the DD forum

mega2 thinks that it is Raimis

I think that eagle is much darker than Raimis.
Top

8:05 Milda came in and strange eagle flies off

I was wrong. Milda is at the left branch.
The eagle was at the tree on the right
8:07 returned into the nest

8:12 Milda jumps into the nest and is looking around
8:14 She jumps at t he left branch

OK, mega2 is not sure anymore that it's Raimis.
ame

If it's one of ours, might be the girl because tail is longer?
Top

i just saw this eagle and made two first pictures. this is not Raimis. i don't think it is Milda either. 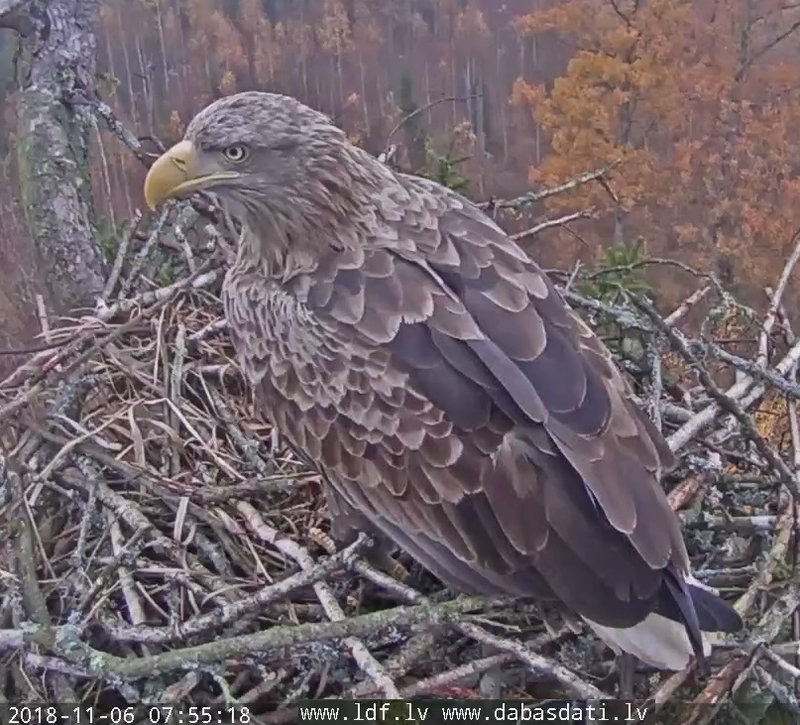 If it's one of ours, might be the girl because tail is longer?

if it were a girl Milda would make a lot of noise and chase her away. do you remember how she treated her competitors in spring 2017? she almost massacred them.

i think this is a strange male. he also has a rather small beak like Raimis.
he's a beautiful bird.

If it's one of ours, might be the girl because tail is longer?

Maris, DD Forum saw the eaglet too. The eaglet is Robis