SWFEC-report:
Midnight-4:25am It has been a bit of a restless night for Harriet as she had to keep the eaglets tucked up under her because of the cold. She has managed to catch some sleep however and the E’s are safe and warm. 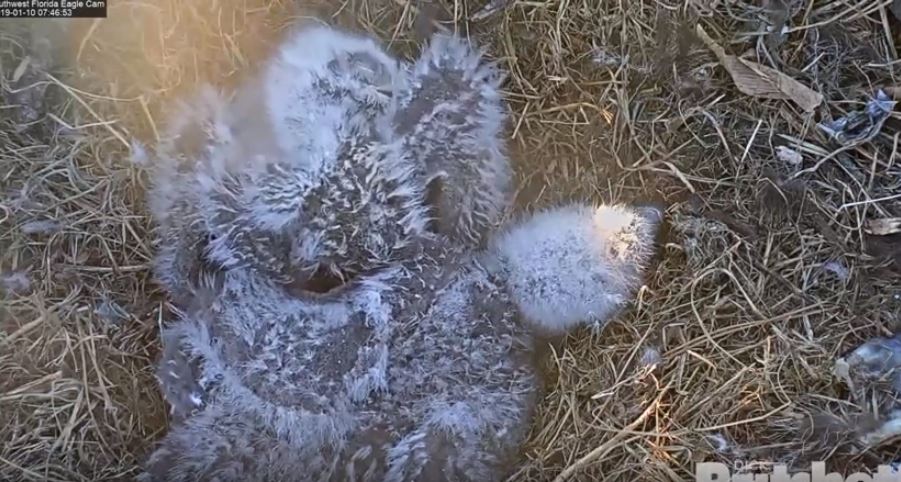 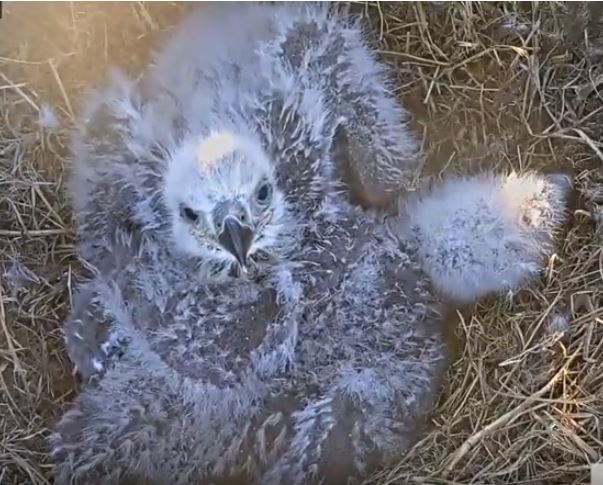 E13, sleeping with head tucked on its back 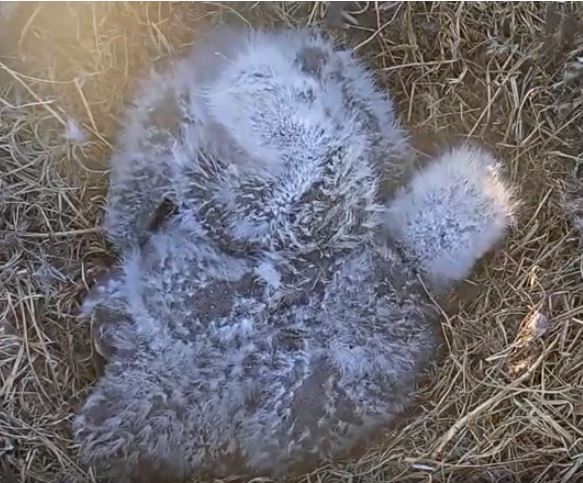 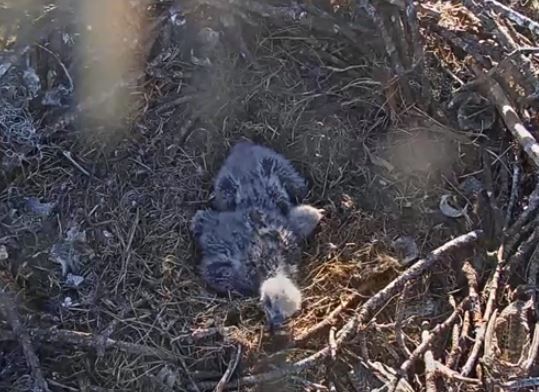 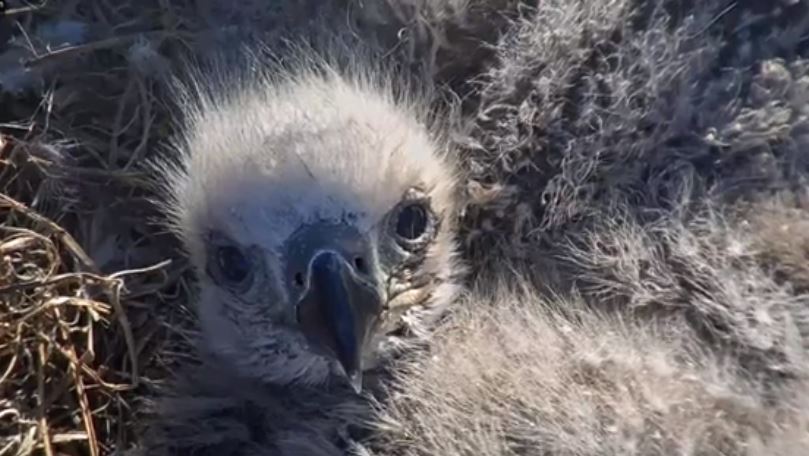 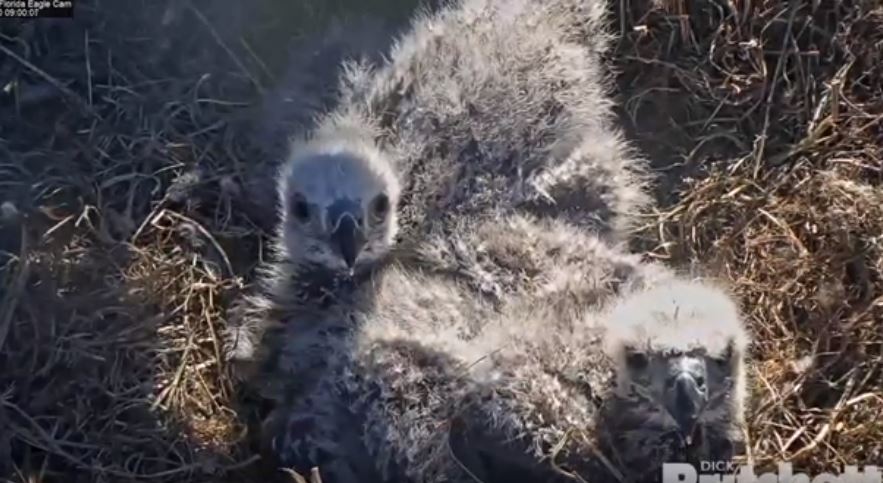 No stream available for a long time ...

Me too, balistar!
And thank you for these sweet pics!

still offline...
The nature needs us not, but we need the nature
Top

We are back for watching 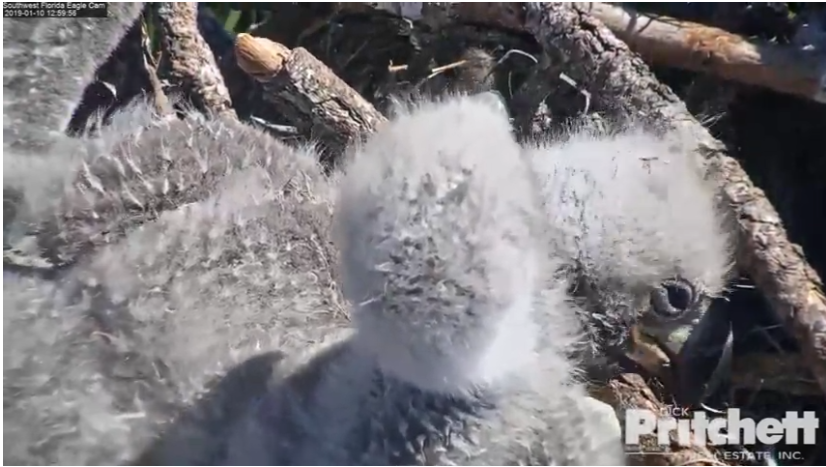 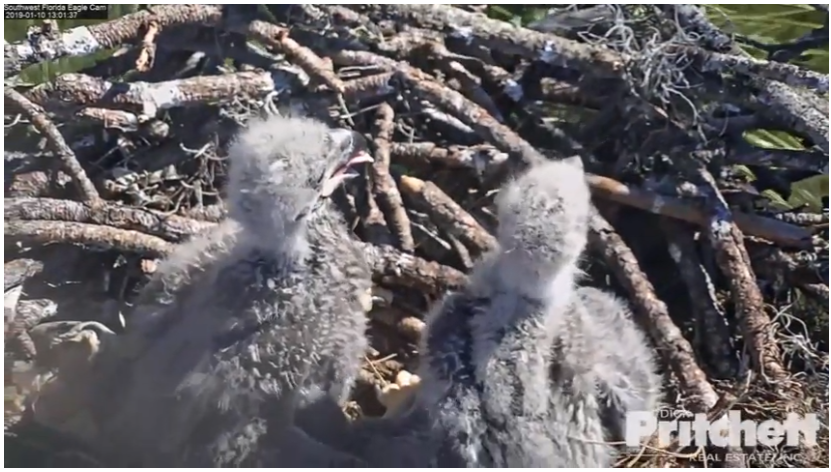 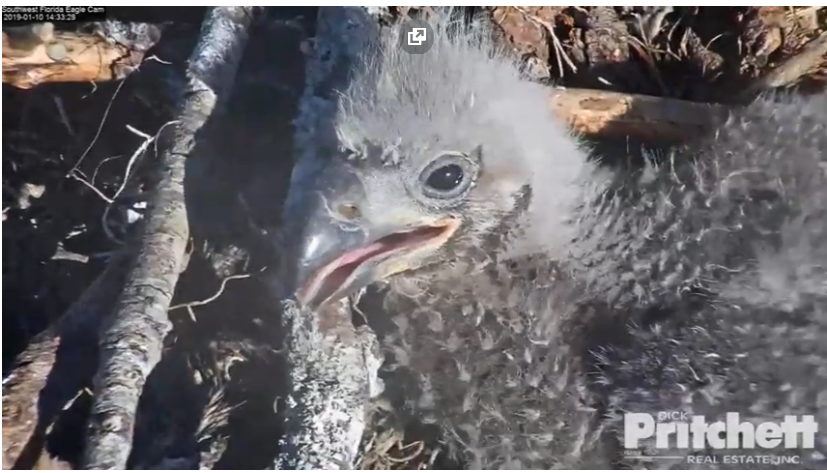 https://abload.de/img/unbenanntbpd3p.png
The nature needs us not, but we need the nature
Top

Besides the sweet pictures of both E's sleeping or resting, it was a hard time today for E13.
Apart from being badly bonked several times by E12, E13 had to wait a long time to get a few food. I know that's how the rules are in eagles nest, but it gets each day harder for me to watch. E12 ate nearly a whole fish today past noon, E13 waited and waited, got bitten in its wing, teared and pecked, and got only a few little morsels that was left. This went on also in the afternoon. It makes me feel so sorry for E13, i think i make a break until the bonking phase is over.

6.51 the bonking starts early in the morning as soon as E13 lifts its little head 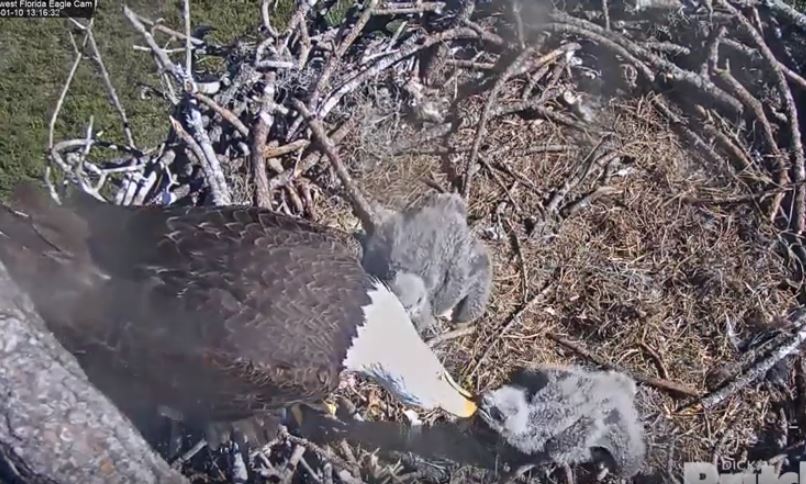 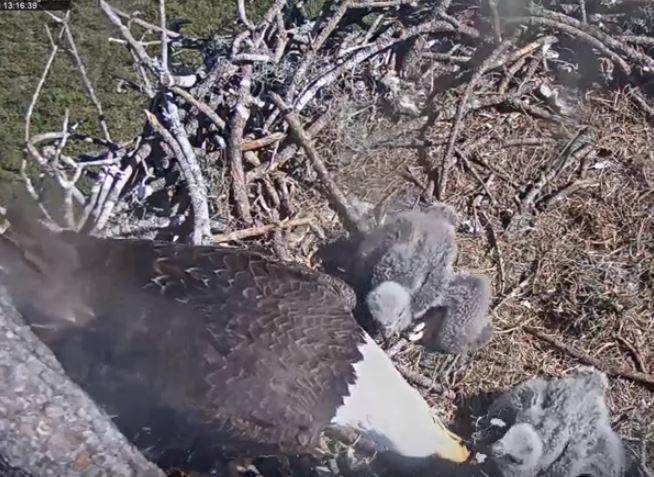 ....and came too, goes after E13, E13 immediatelly went submissive with head down 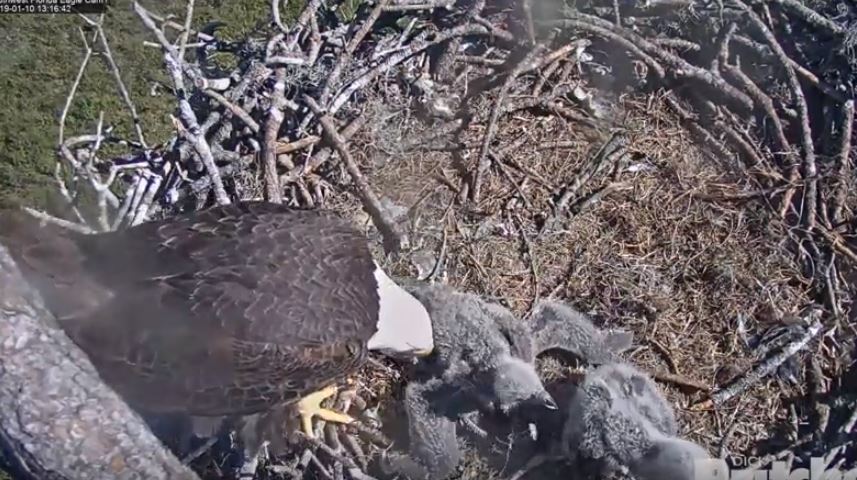 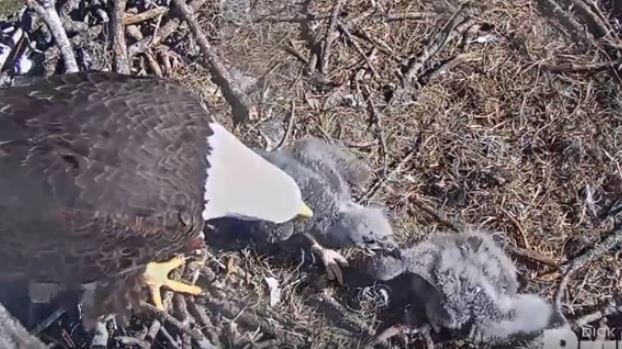 E12 ate nearly the whole fish, E13 had nearly nothing, H gave him the fishtail, E13 tried hard, but couldn't swallow it - finally E12 could, swallowed the fishtail. Milestone for E12.

No, i don't want to watch this a few hours a day anymore. It's not for me, i start suffering with E13

15.06 H came in with a headless fish, the kind with many little fishbones.
She did not feed immediatelly, she ate the fishtail, that M has left (for her?

H still didn't start to feed, but shaded the E's and they were resting.

, E13 today did the same - pooping while standing.... almost standing 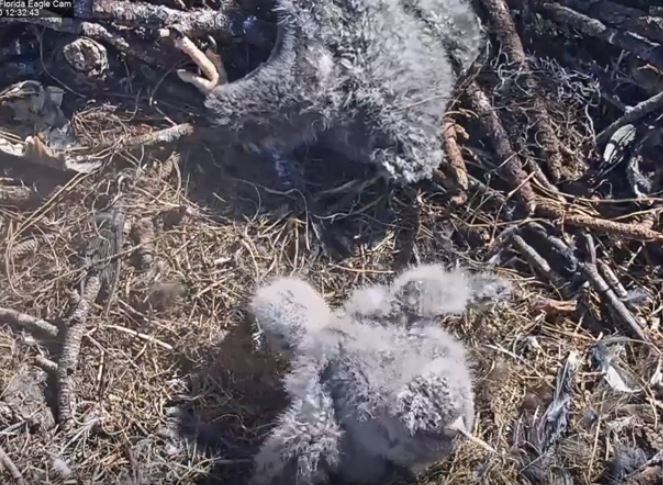 i wish E13 good luck and gaining strength to soon stand for itself.
Top

, E13 today did the same - pooping while standing.... almost standing

i wish E13 good luck and gaining strength to soon stand for itself.

yes, really not easy to watch, at least for me. I get close to them, when i watch them almost the whole day, and then it hurts me to see E13 suffering from getting bonked and must wait so long to get fed.

All the more I was pleased to finally see this huge crop at E13 in the afternoon at 16.10, after the (bonking-less) feeding of H. Never before saw such a huge crop at E13, so far only at E12, and i was so happy for him. 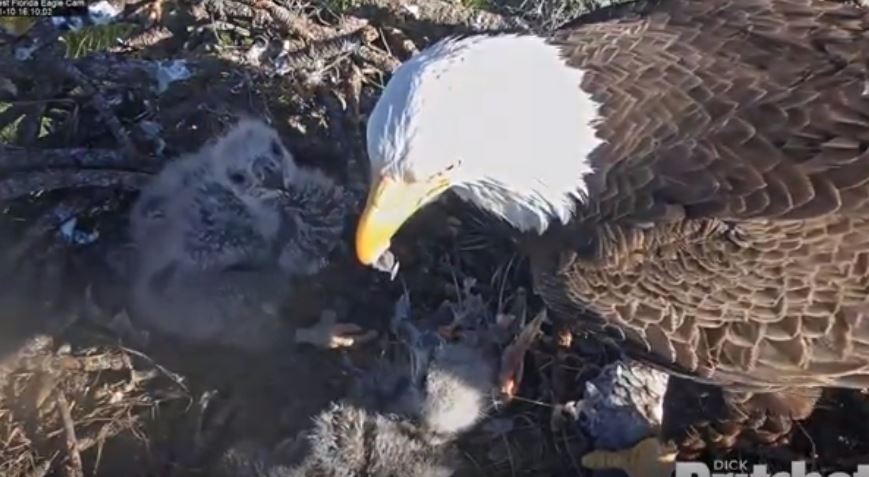 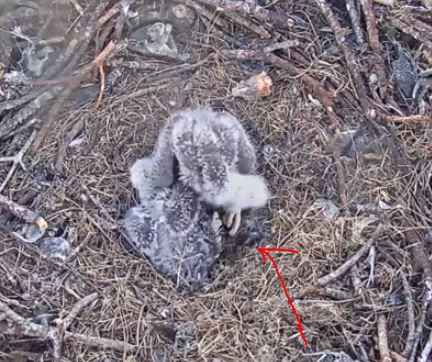 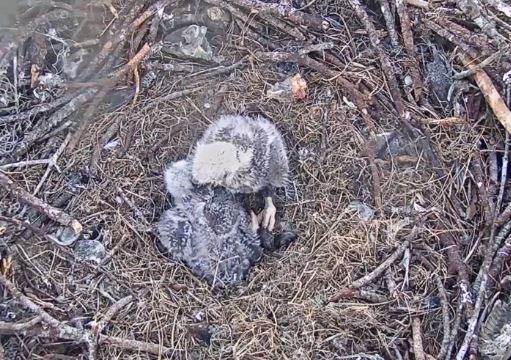 I can watch them for hours at this stage. They are so cute when they have this heavy and long wings, which are falling down and they don't know what to do with them. 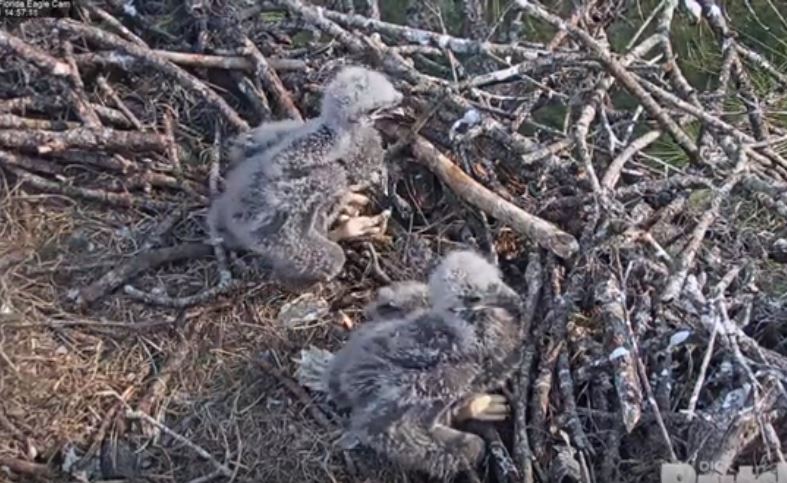 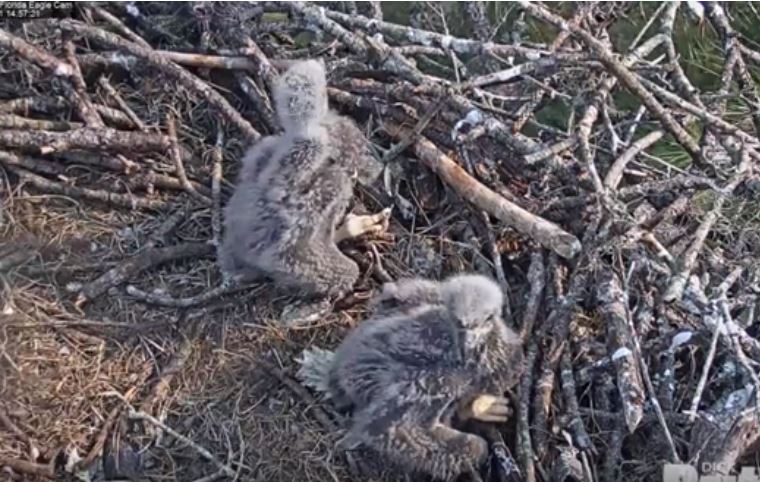 that do me very happy, TY for good news

"Besides the sweet pictures of both E's sleeping or resting, it was a hard time today for E13. ... It makes me feel so sorry for E13, i think i make a break until the bonking phase is over. " ... Balistar, you know, that is reason while I observing this nest only few time by stream ... Abigyl wrote they are so sweet etc. , yes it is true, but for me it is on this nest hard to watch, i feel so sorry for the younger on this nest every year

thank you for continuing reporting, documentation, all comments very much

I don't think, that there is a very bad bonking here. It is actually very moderate. I saw a lot worse. So bad, that you could hardly watch it. Lack of food is the reason.. Here most of the time is enough food. Only sometimes it comes a little late in the day. Then the older leaves out his frustration on the younger. Even if no food has arrived. 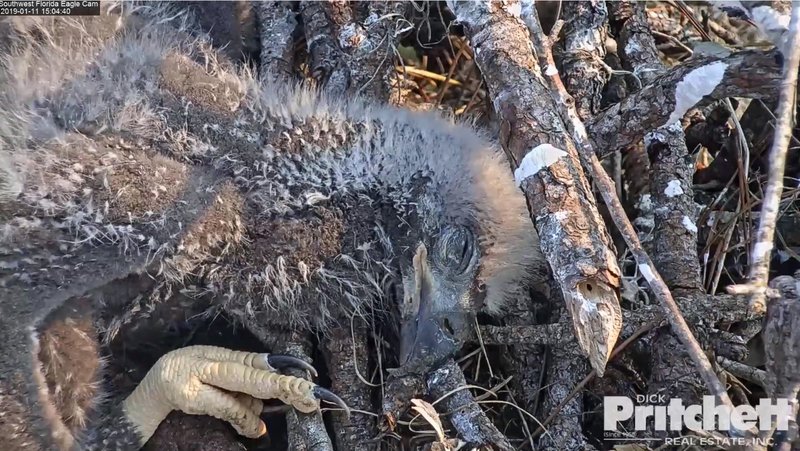 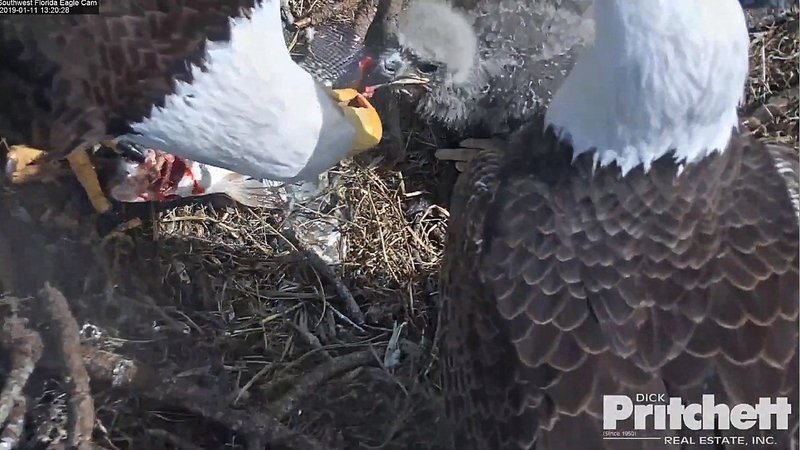 thank you very much for your supportive words. I can imagine exactly what you feel - i feel the same and it's getting really hard to watch also for me, each day more.

Yesterday the most of the day they both were resting/preening/resting peacefully with their huge crops, sometimes even stood tall at the rails and looking over them watching the area, and i was so happy about - until late afternoon/evening.

H recognized that E12 was getting hungry and becoming in dispute mood. She waited and even searched for M bringing in food. H found a small bone with some meat on it and tried to distract E12 who began to skip his discomfort at E13. M came after sunset with a huge catfish, still alive - and another hard time for E13 began.

H picked up the flopping catfish and it sliped out of her beak - and felt on poor E13, always poor E13 has the bad luck. The catfish was struggling and a fin must have been stucked under E13's wing, when H picked it up again and teared it to the side she dragged E13 with them. Poor E13 was struggling, felt on its back, feet up and kicking with those feet. Even M came back to nest to look if he could help, but H managed the situation and E13 managed to turn around and get back on its feet. M then left the nest.

E13 wanted to eat, got 1 bite, E12 saw it, came quickly over and bad bonking started. I haven't seen so far E12 bonking E13 that often in a row and that aggressive. E12 got fed and during feeding, even with full beak, E12 has bitten, teared and dragged E13, as soon as E13 moved. E13 should have stay down and not moving at all, but E13 wanted to eat too and tried several times to reach to feeding from another side - E12 always went after E13 and bonked sometimes very bad -in its head, on its back, wing and side- even if E13 did not move at all and was laying down in submissive posture or when E13 tried to escape by creeping. Even as E13 curled up like a slug, E12 attacked him.

Pheeew, that was hard to watch and i wanted to stop, but i also wanted to see, if E13 was getting food finally - but no way, E13 had to go to bed without food. Harriet was not able or allowed to feed E13. E12 is so dominating, so much stronger than E13, E13 would not have any chance against E12. I think H knows when it is better, not to feed E13 to not get harmed badly and wait or watch out for another, better chance to feed E13.

I only insert a few pictures of the catfish, not of the bonking. 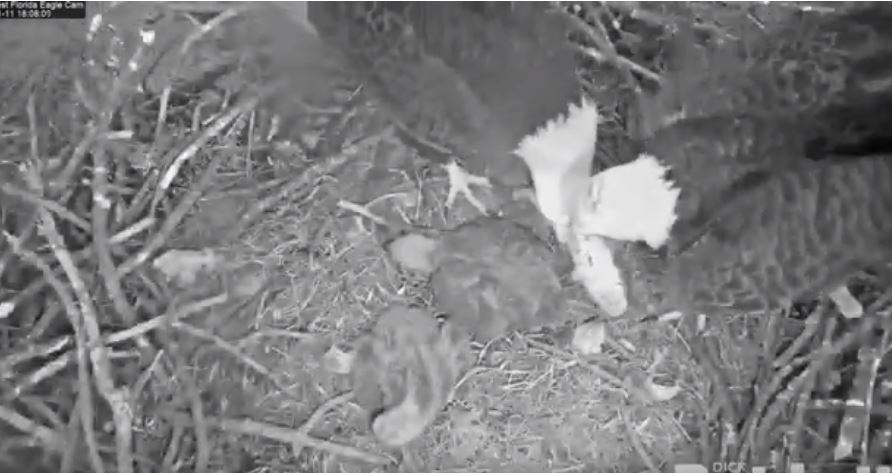 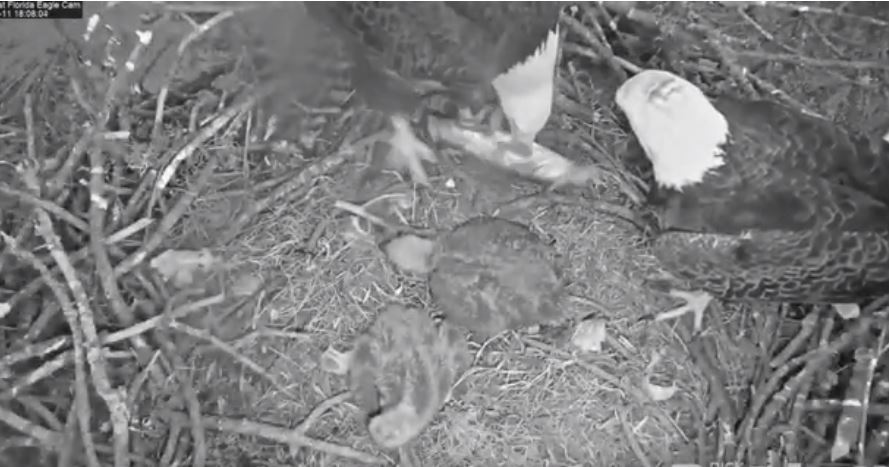 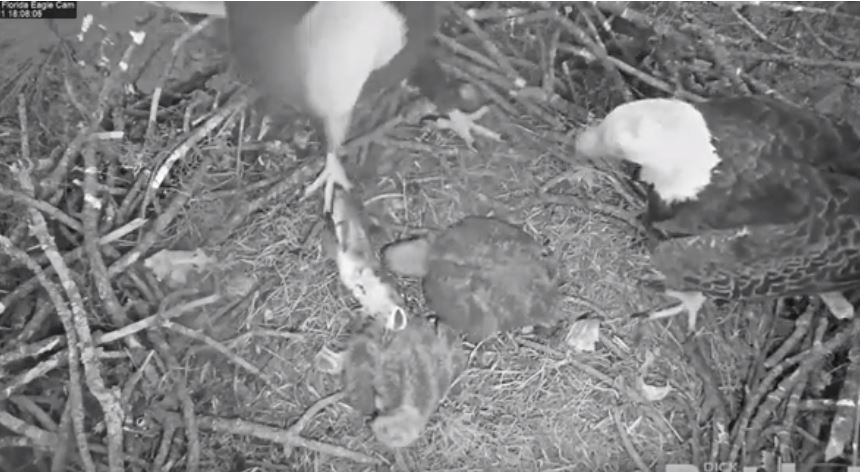 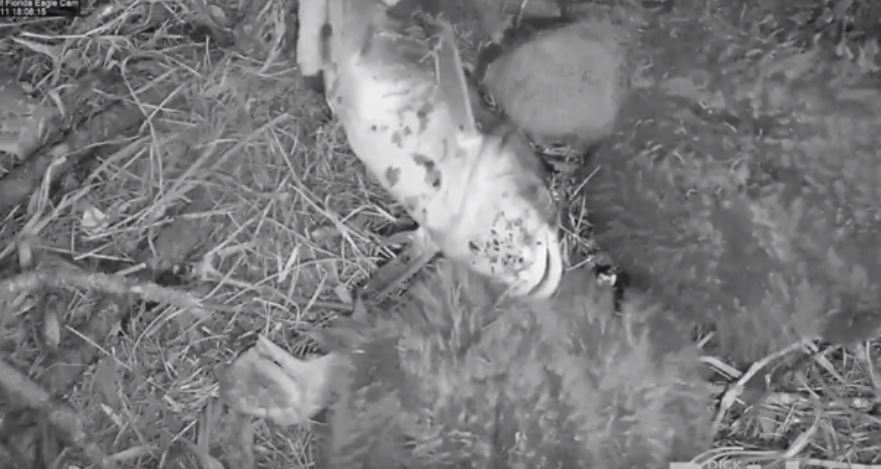 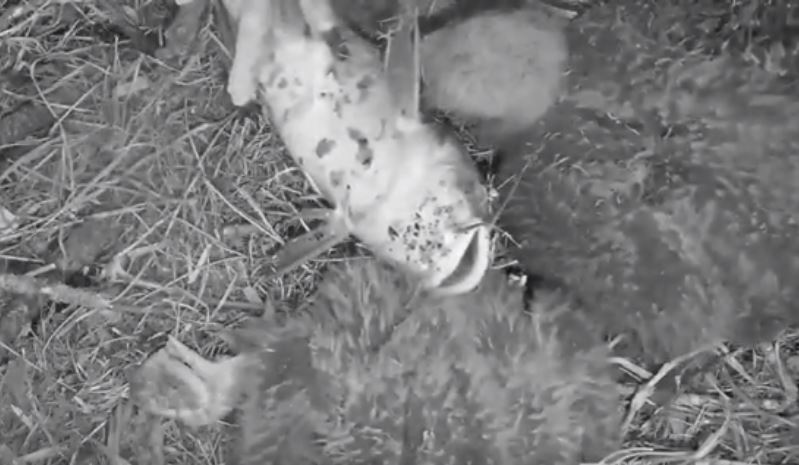 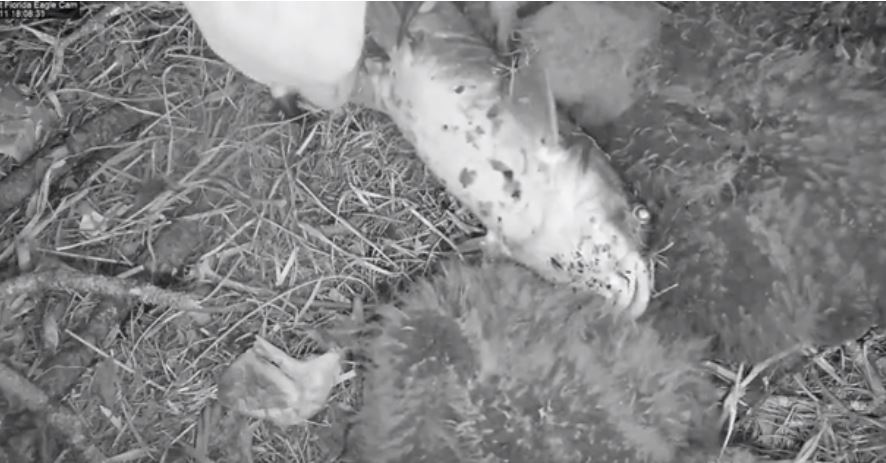 Liz,
I know - all birds (animals) has also bad moments in their life, also the little chicks on nest. Little eagles has bonking time - less or more long and less or more hard. I know that. But I want not watch to that - for me is enough in this time to read the news, shots, (nice) vids.
I remember also e.g. the previous season on the Australia Sea Eagle nest, how and why perished the younger chicks (I saw not that on nest), etc. (Observing storks nest, little storklets is also not all the time only cute moments, you know - yes, that is the wildlife ... previous year on HU nest was especially the time when the chicks hatched very, very hard to watch for me)
Thank you Liz for your opinion, comments, shots and vids

balistar, now I must go away - later, in the evening I will read your comments

the big catfish slipped on E13 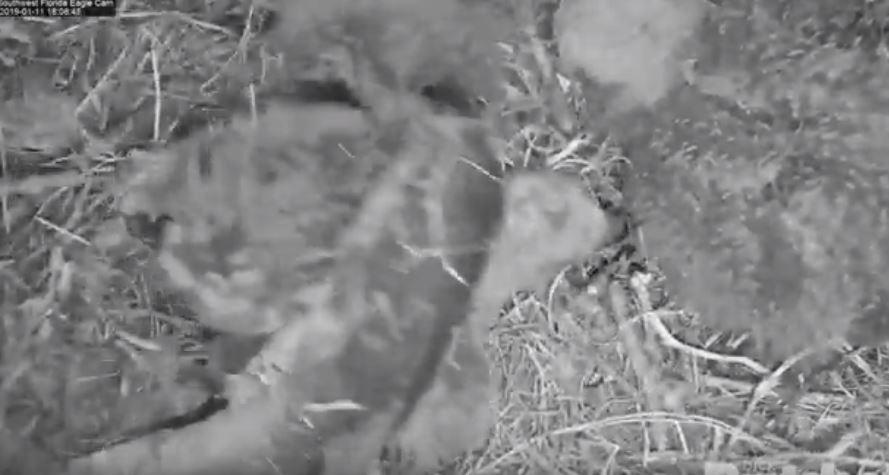 H picked it up to tear it away 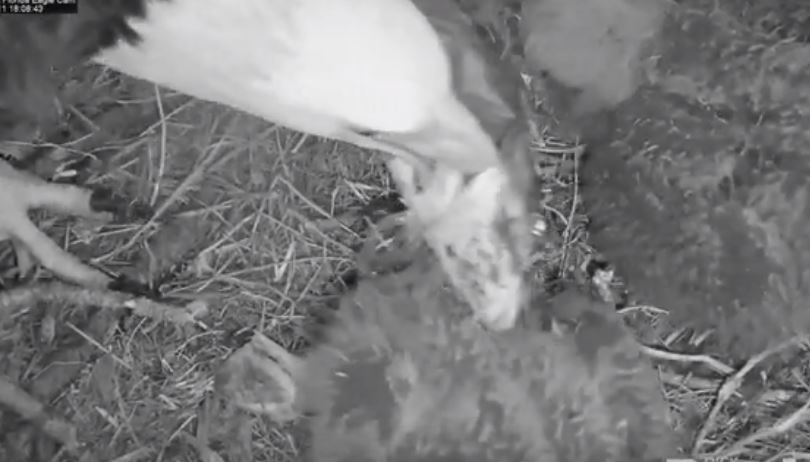 fish stucked on E13 and H dragged E13 with it 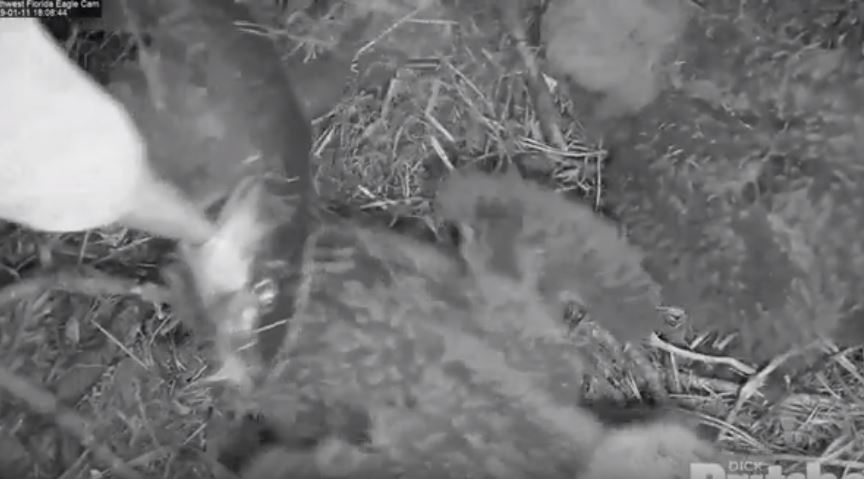