ame, thanks a lot for opening the new thread

A new nest view! Now we can see a tree trunk form another tree in the foreground 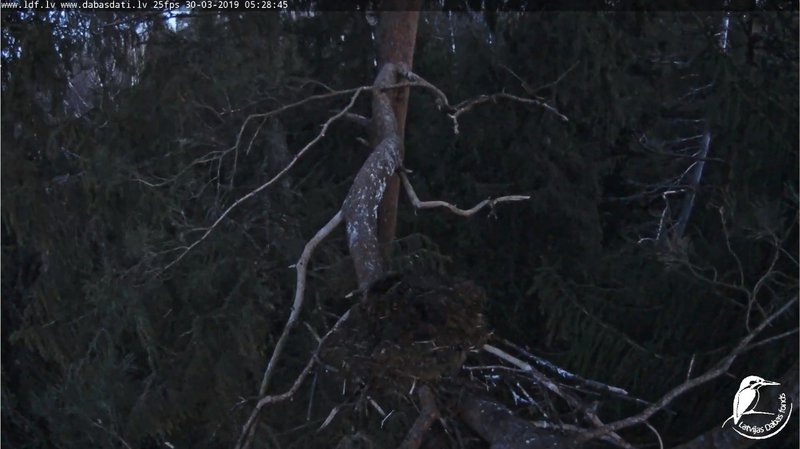 EDIT: Info from the last year -
Māris Strazds.....Nest - this year they won't do anything since it makes no sense. It has been fallen down before this year at least twice - and has been restored in the same place. After winter nothing may remain there - if support branch remains, they might rebuild it within a few days. May not. This is actually very interesting document to see how it happens - as it has happened repeatedly in other nests too - exactly around the time of departure and in some cases has caused departure. It is obviously a good indicator of poor nest site (location in tree) wich in turn is indication of lack of good sites altogether.

Information youtube description:
In 2018, nesting was successful. The first black stork female arrived in the nest on April 5th and the first male on April 7th, but after a few days they were driven by another stork couple. Both adult birds were without rings.
From April 12, five eggs were laid, four of them were hatched (May 18-20). All four Storklets were successfully fledged and were last seen in the nest at 8-10. in August.
Top

Hello everybody! I watched both black storks nests last year, but didn't participate in this looduskalender forum. I am happy Gaja has returned and as far as I understood from the photos there are attempts to restore the nest. Or is it just an attempt to regulate the cam working?
Top


Maxjusha, welcome to the forum

The branches are full of fresh poop. For me, the stork was here a few days.This is not from the previous year! 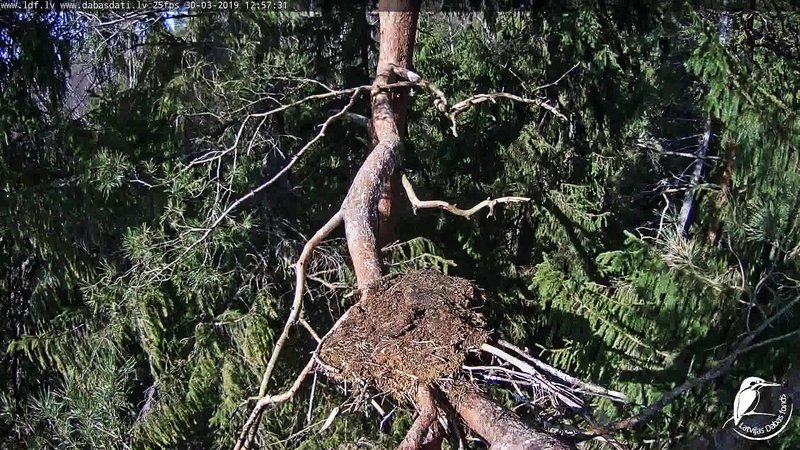 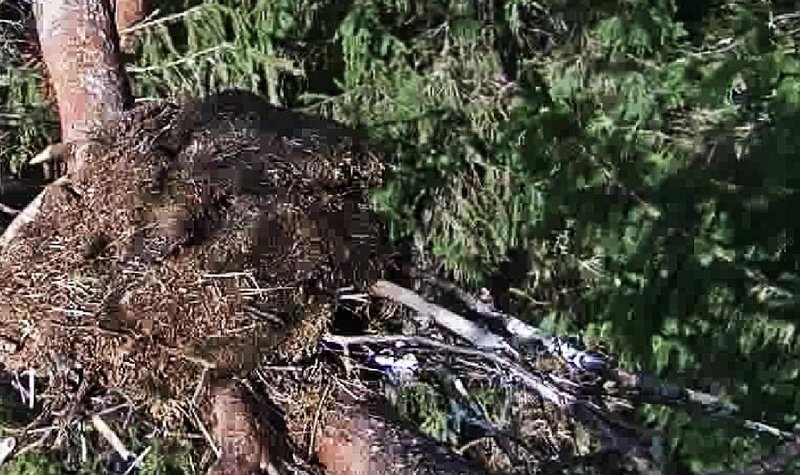 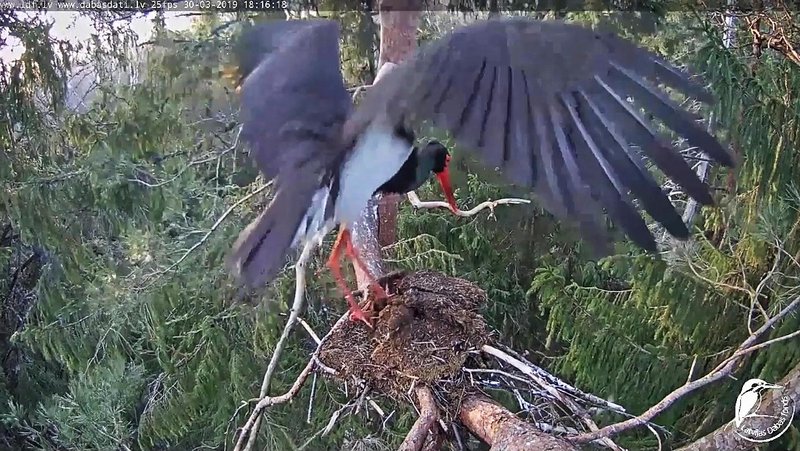 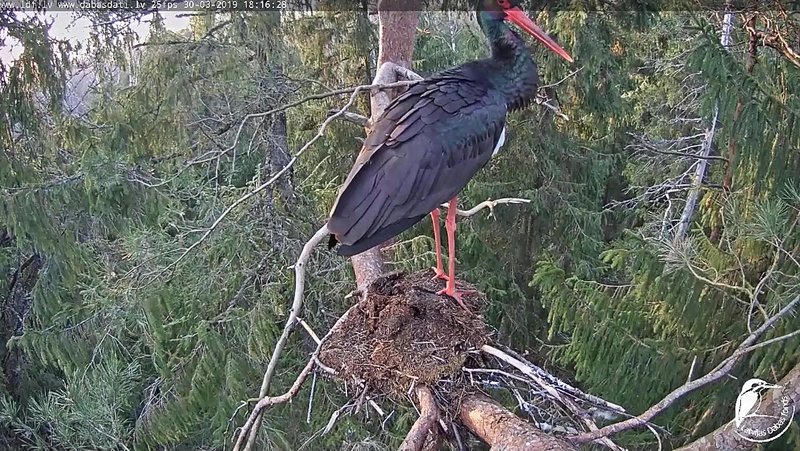 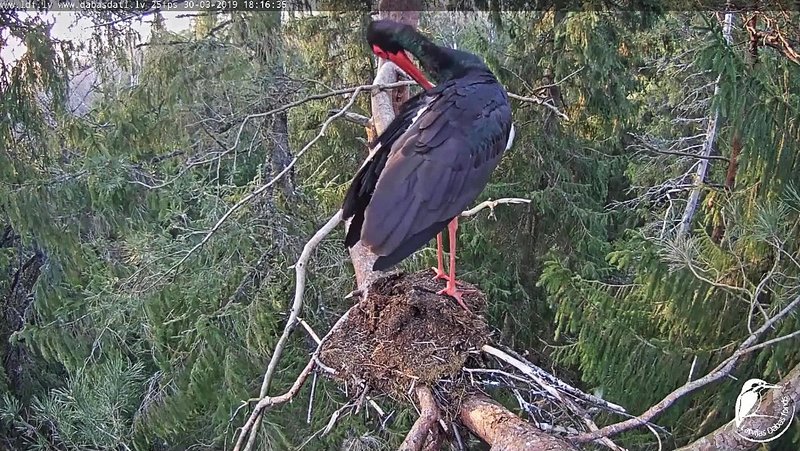 bad camera view.. she is on the "parent branch" headless

When the nest is rebuild, we will only see headless storks

Yesterday she could not come to her nest. Janis was here
Top

The nest is in a worse condition than before. She almost fell down 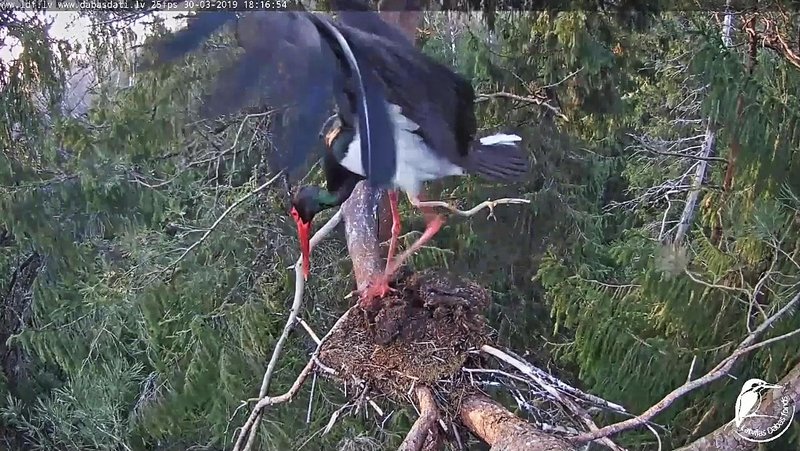 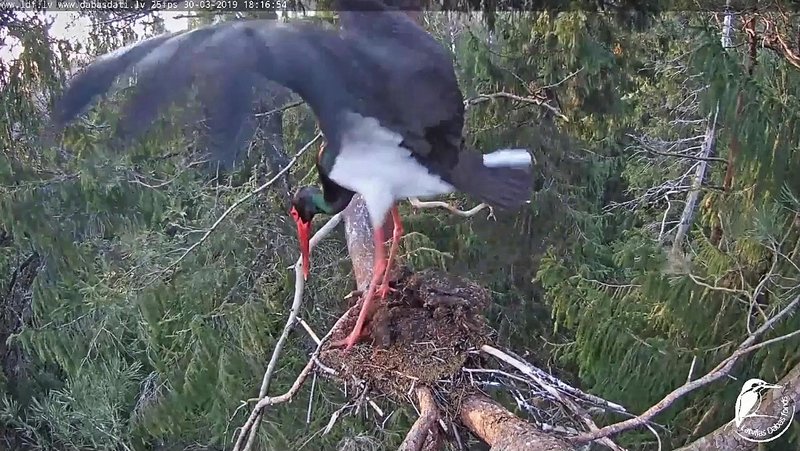 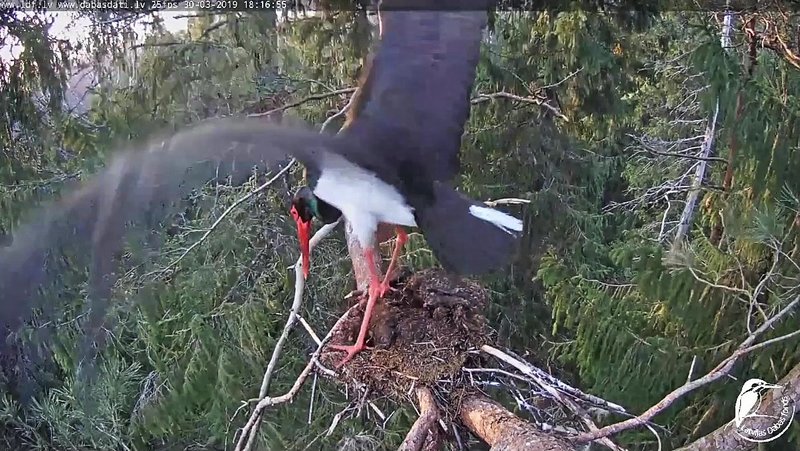 BTW- for me it is Gaja

She went on the parent branch as always 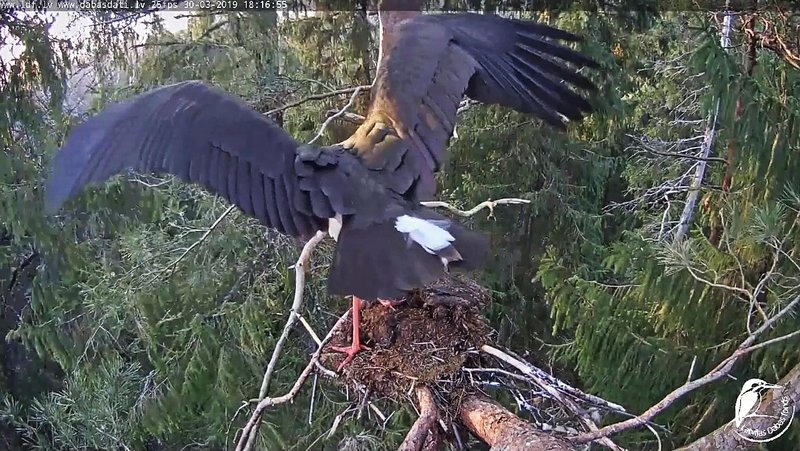 18:53 She is still on the branch and is preening herself.
Top

A white feather on the tail?
I guess it’s an undertail covert that slipped onto the top of the tailfeathers …
Top

When the nest is rebuild, we will only see headless storks... 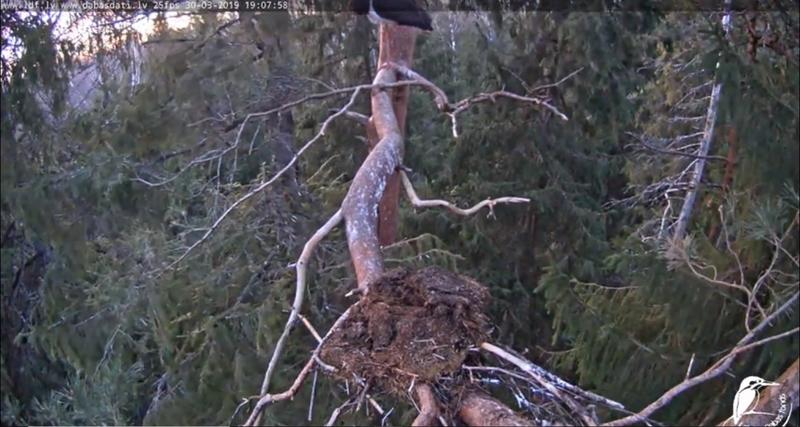 martinmiethke wrote: ↑
March 30th, 2019, 7:02 pm
A white feather on the tail?
I guess it’s an undertail covert that slipped onto the top of the tailfeathers …

That happened when she almost fell down
Top

Thank you, Ame, for opening the topic, and Liz, for the first infos and pictures!

I've also seen when the Stork slipped almost down. The right piece of the nest was about to break away. It is probably totally dry. 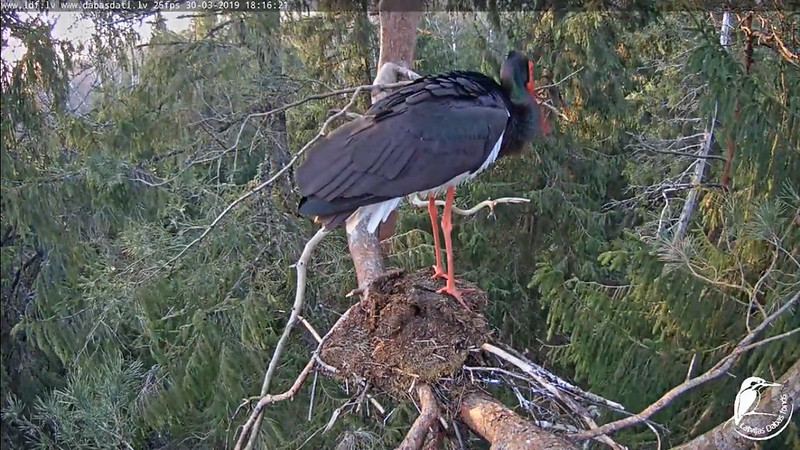 18:16:54 The soil on the nest is threatening to slip and the stork has to struggle not to fall from the nest. 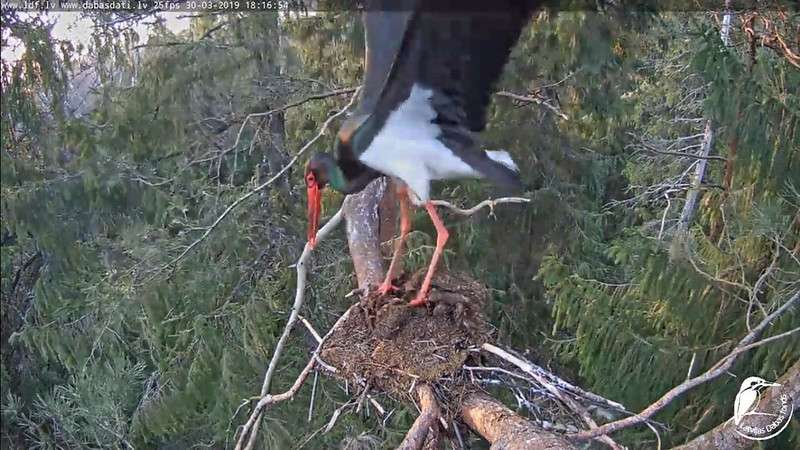 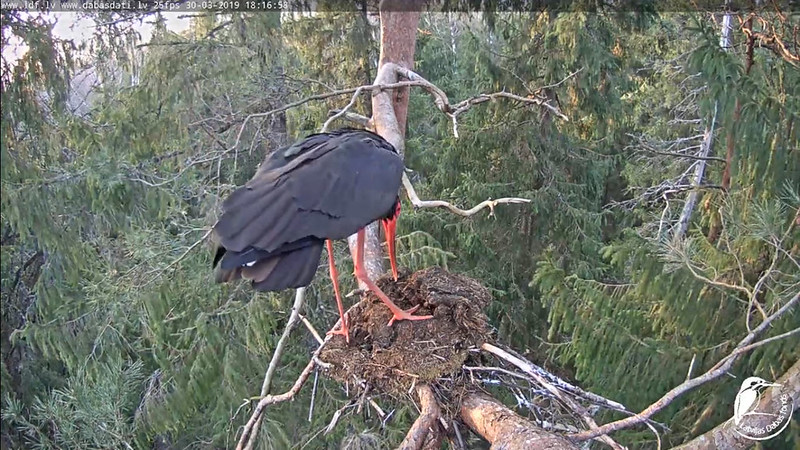 Good Morning Solo, Michi and everyone

Thank you for the nice pictures 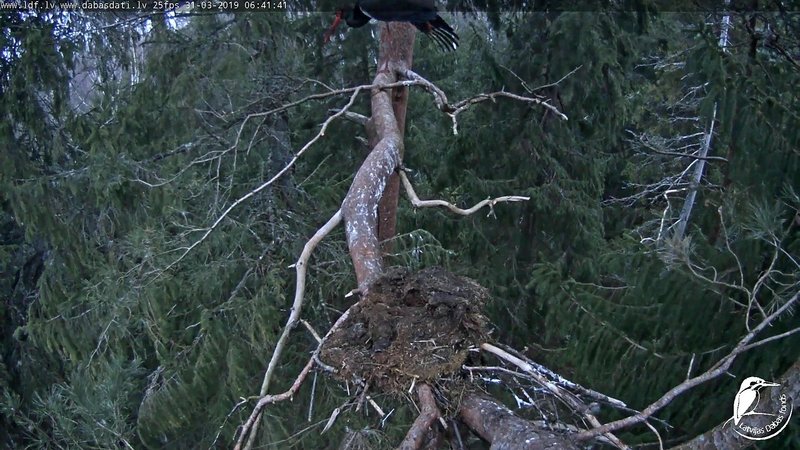 The female flew away. It is the same female, who was here on march 29. 2019
She has a bright spot on her head. Unfortunately, the lighting conditions are different!
But I think it's good to see. 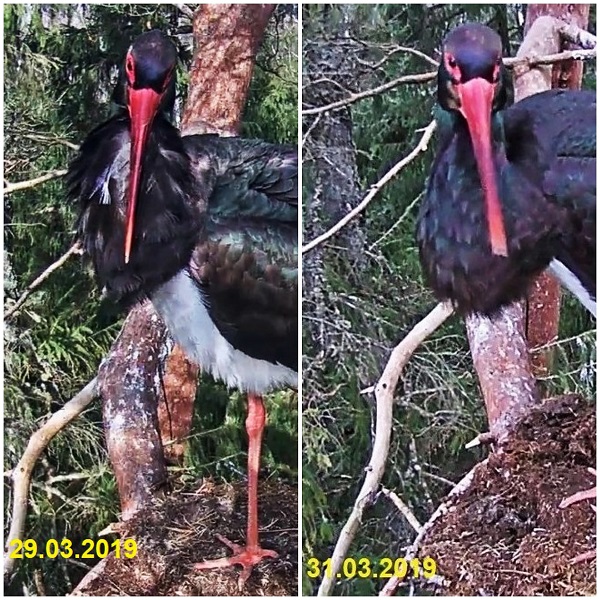 6:53 Female went from the branch into the nest 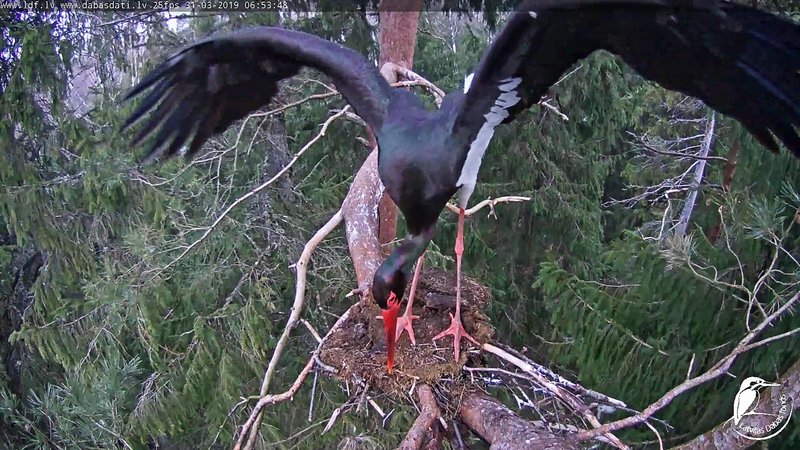 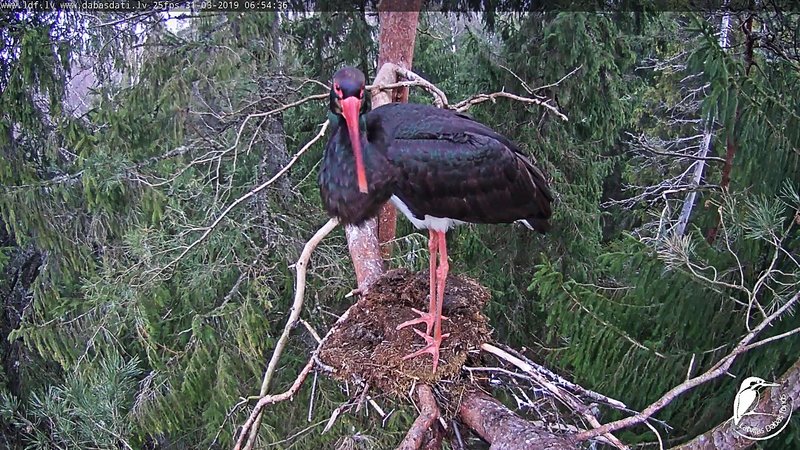 6:55 She removes some loose pieces from the nest 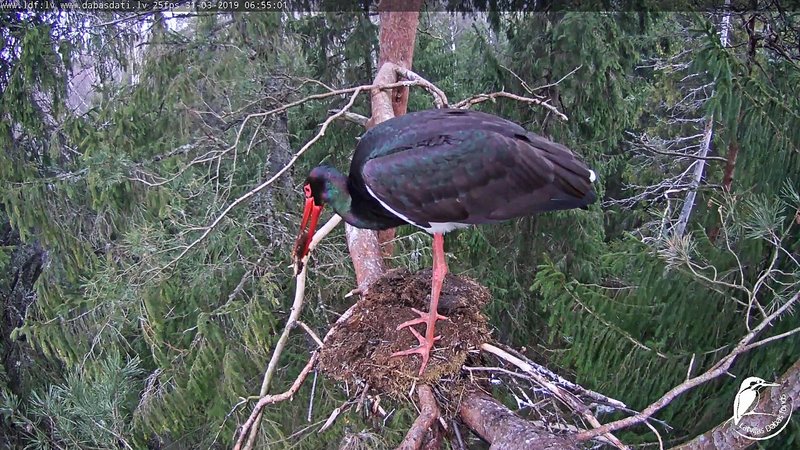 Gaja preferred the right branch to fly away from the nest. She went to the smaller right branch and flew into the forest.
I write that because we have to document it. The behavior differs at the individuals.
We should write from which direction they arrive and fly away. In addition short videos

Now I'm pretty sure it is Gaja! Gaja had a black feather on hér right side! This feather is still visible 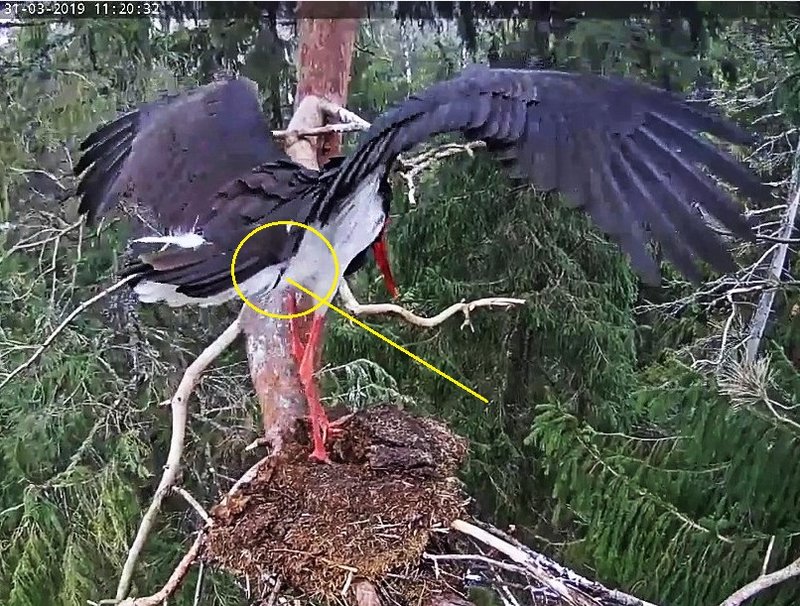 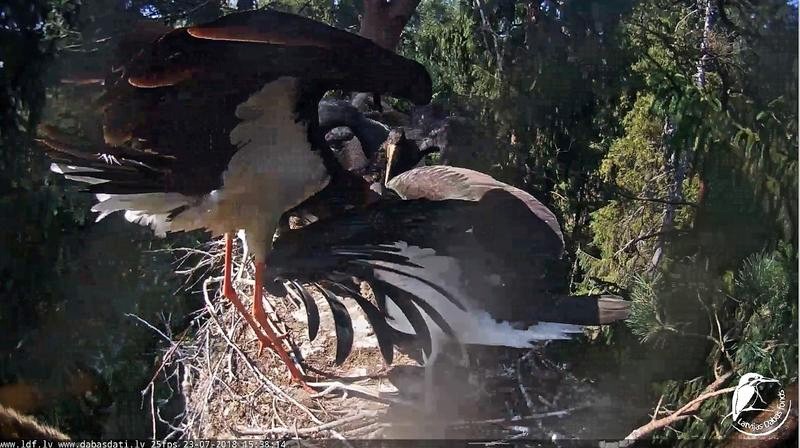 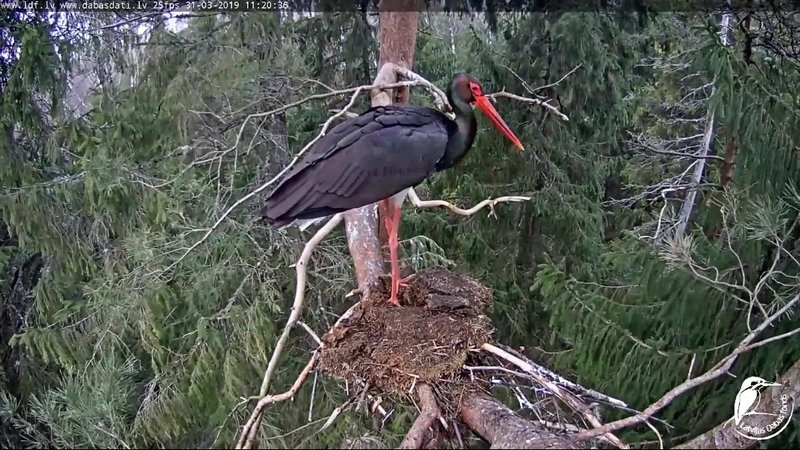 She went on her branch and is still there. She is waiting for Kaupo

Gaja is still on the parents branch 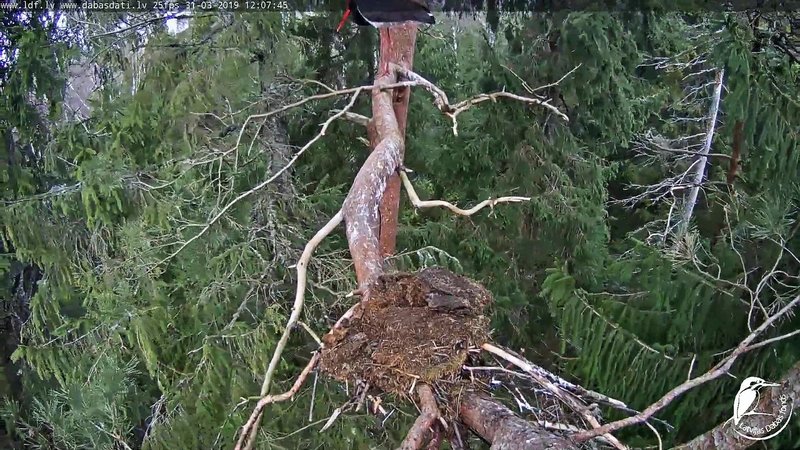 and turns again on the branch

oh dear! what a wind!She almost slipped off 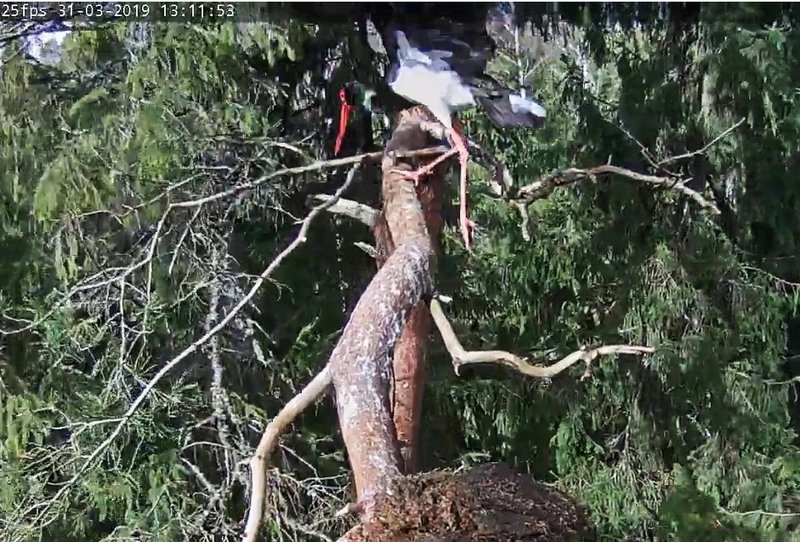 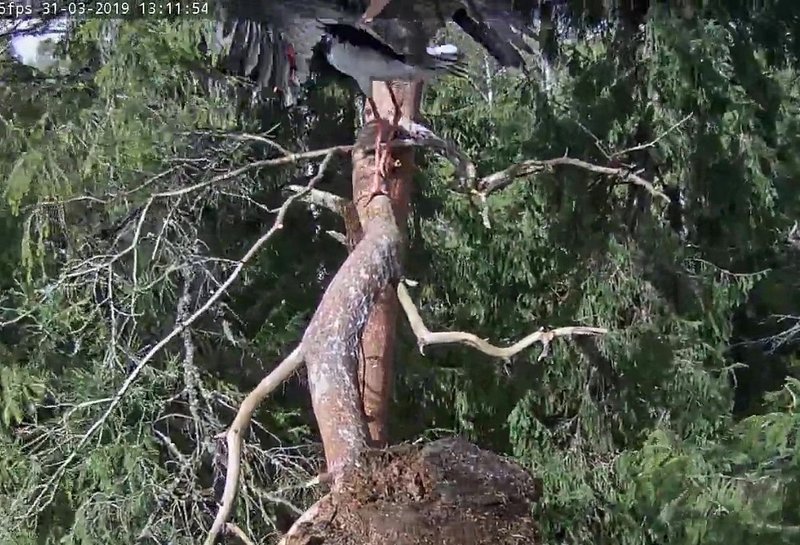 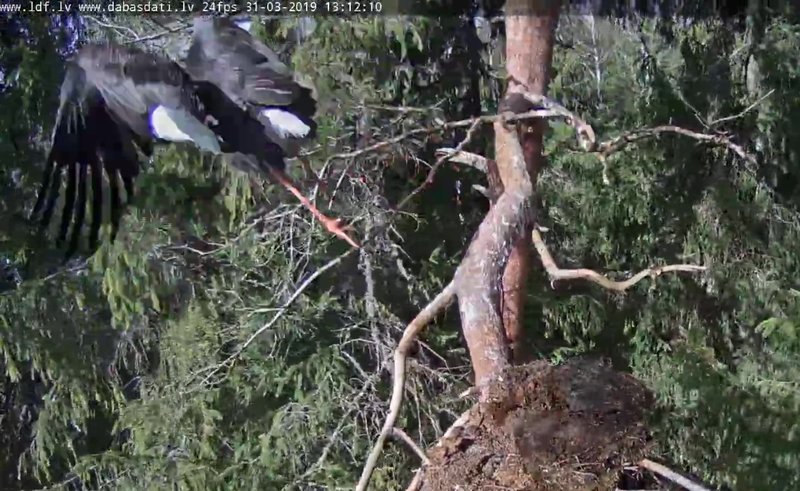