Unfortunately not any more under water. 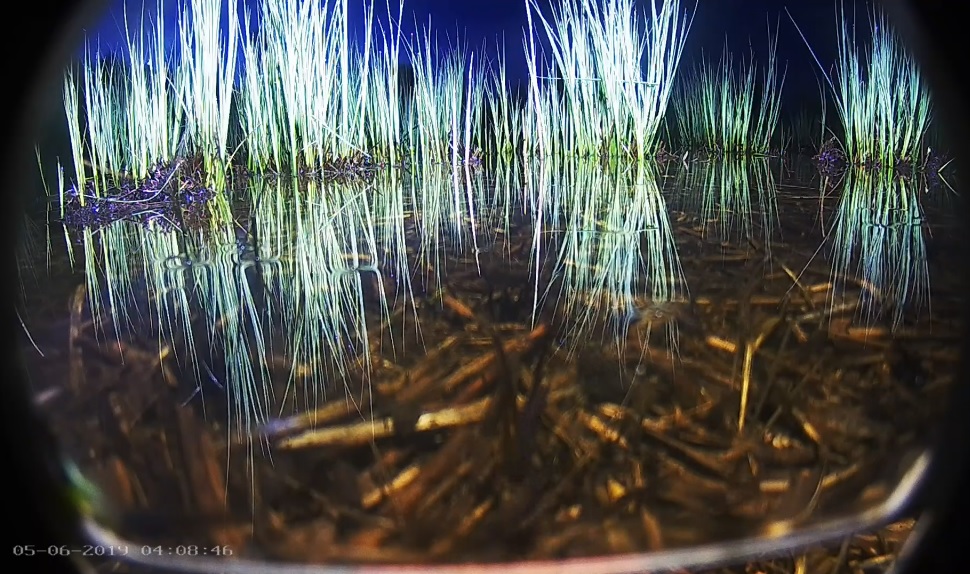 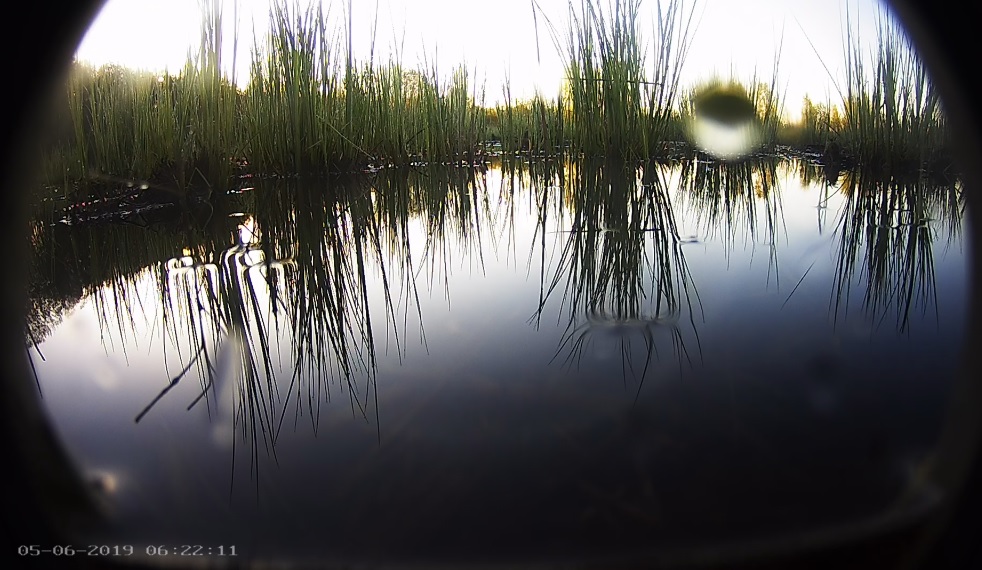 Scolopacidae - I think a Gallinago gallinago 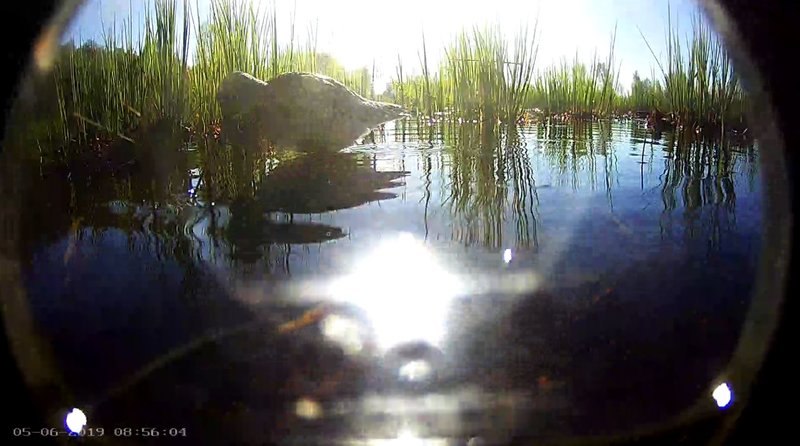 09:05
I saw more of them.
*Only two things are infinite, the universe and human stupidity, and I’m not sure about the former.* Albert Einstein
Top 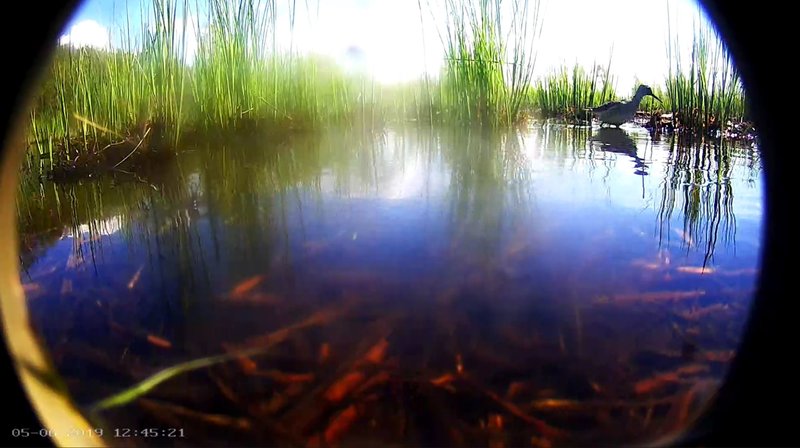 The same in movement ;-)

This morning I heard the cuckoo first time in this year - here, at the fish camera, lol 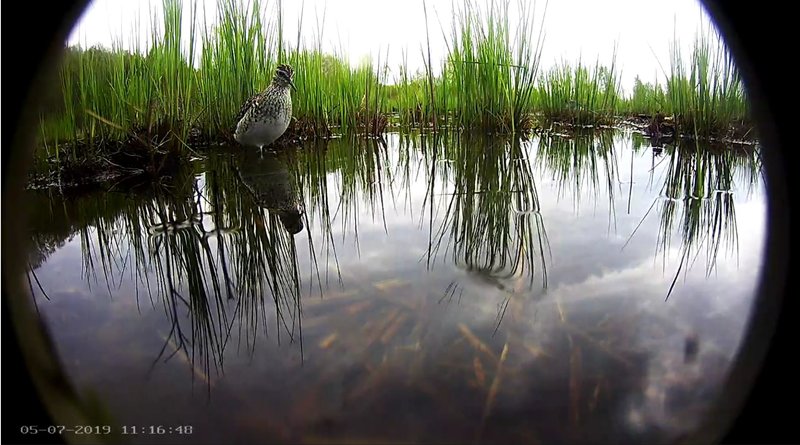 What do you think: will the camera stay like now, only above the water (and still stuttering) ?
When i had to be up in the night i enjoyed the view under water - expecially my hunting for the "vertical snake"

They could of put it back to underwater - downward to the waterlevel - would be a nice view to the underwater world. It doesn't have to be necessarily sharks and tropical fish and corals, the northern waters are interesting, too

Above the water it is a nice view but not really much happening ;)
Under water all the tadpoles will develop and every second another visit is crossing the screen

Hope you had some money in your pocket - than you will always have enough money, my grandpa promised

I would be happy to see more of this faszinating and calming underwaterworld. But well, when it gets dry there - let's wait for the rabbits

Good wish, Meike, lol! I didn't know that. I'll keep it in mind - next time

Just a little motion for this forum, too ;)

Gallinagos in the early morning...

but cam is still stuttering.
Top

Meike wrote: ↑
May 1st, 2019, 3:38 pm
The beauty of the night: Please forgive me that I put a cheesy music in this video - but I just learned how to cut videos and need to practise a little bit

*subscribe ;-)
I didn't saw it before. Don't know why, but firefox sometimes don't show the video so i can't click.

Meike, which software do you use for cutting ?
I'm just looking for one for free for me. Probably won't do very much with it, but cutting, merging should be possible.

Hope we will soon have a view under water again :-)
Top

That tiny white worm on the leaf in the middle of the video and in the middle of the screen was probably definitely a hydra, but the big fatty flat black worm on the screen in the end was most definitely adult Hirudinea
Majahaldjate Heaolu Edendamise Selts ja Võlukunsti Ministeerium On Jobud Grupp feat. Thorin teatavad: I am your favourite dwarf. Don't deny it, don't try to resist, resistance is futile :)
Top

This camera only works for a few seconds between pauses now.

OT:
it is just as bad as a lynx camera last year with Elisa.
(I was their customer for a while. It's just incredible how unstable and slow their internet connection is. and they were only interested in collecting money ...
Top

Yes - i'm only unsecure because i could't recognize tentacles. I think we should have been able to see them, shouldn't we ?
I would have expected a Hydra usually making more changing: being contracted (e.g. danger) or stretched, seeing sometime one tentacle or parts of tentacle at least, and not only moving around with the same length (like a worm). But it was a short time watching, too.

Yes, i think so, too - and i think, i saw another one just at the beginning of the video on the left part, on the ground, too.


This camera only works for a few seconds between pauses now.

I was also thinking about the tentacles, then again, I thaught, maybe they are so tiny and transparent, that we aren't able to notice them.

Please please restore the pond camera, or move it; it's absolutely unique and means so much to so many people I know. We've all seen the larger animals, but following the cycles of the smaller has been an incredible gift - there's nothing else like it. Please consider this...
Best, Alan
Top
Post Reply
496 posts