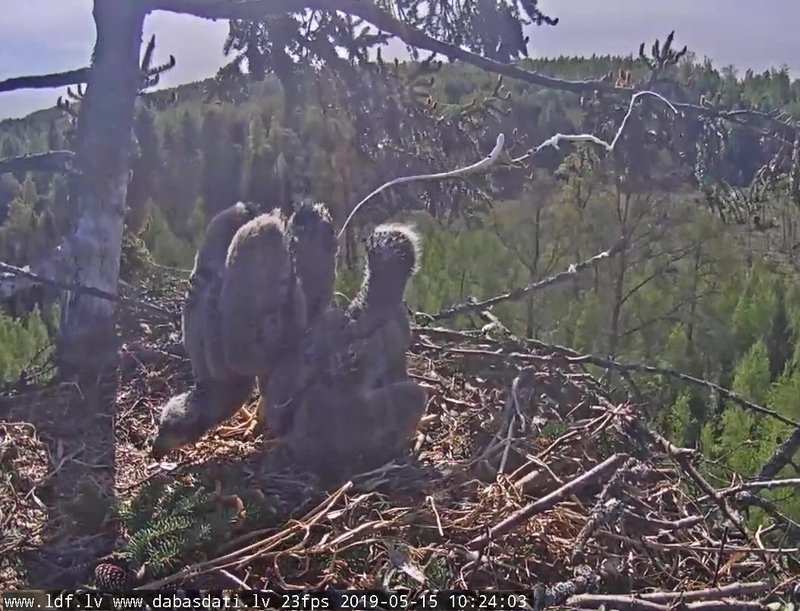 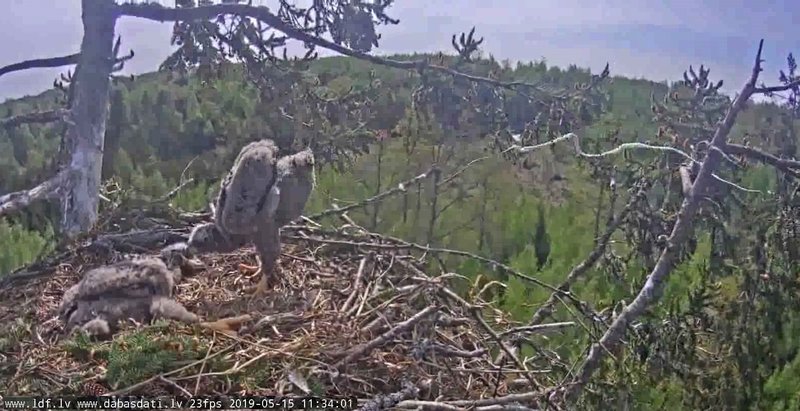 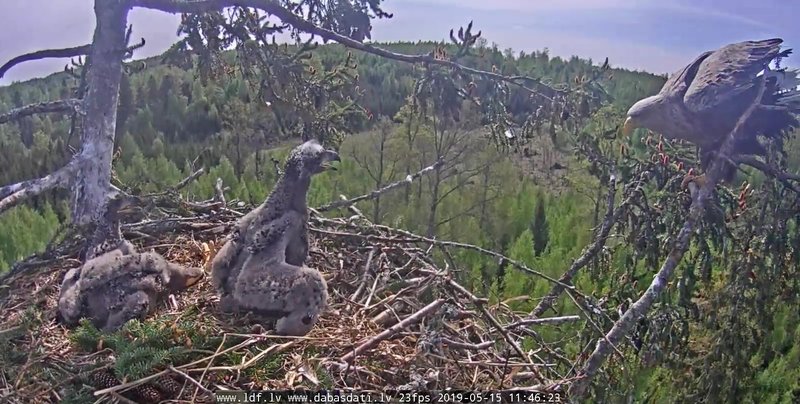 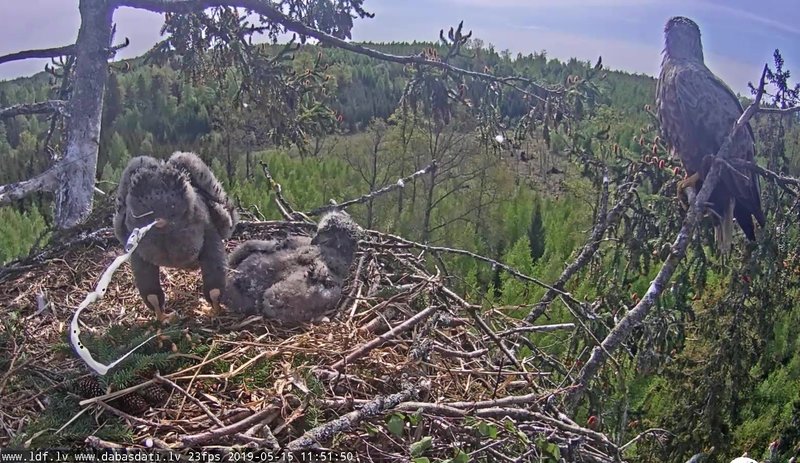 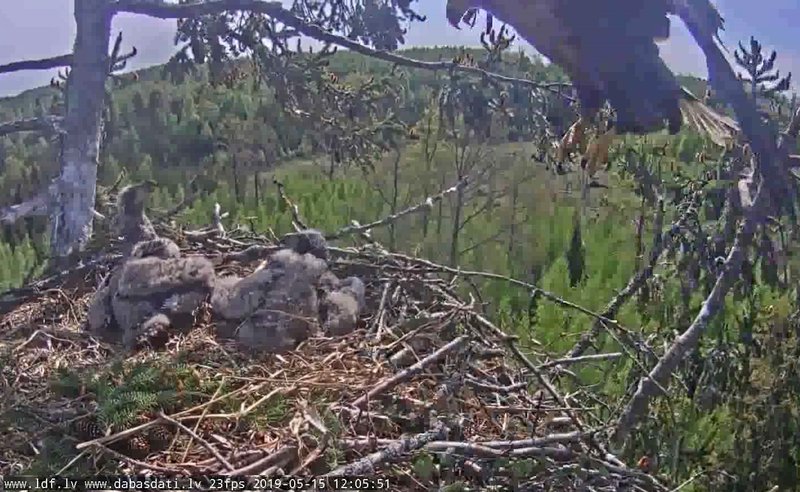 it was he, not Milda. 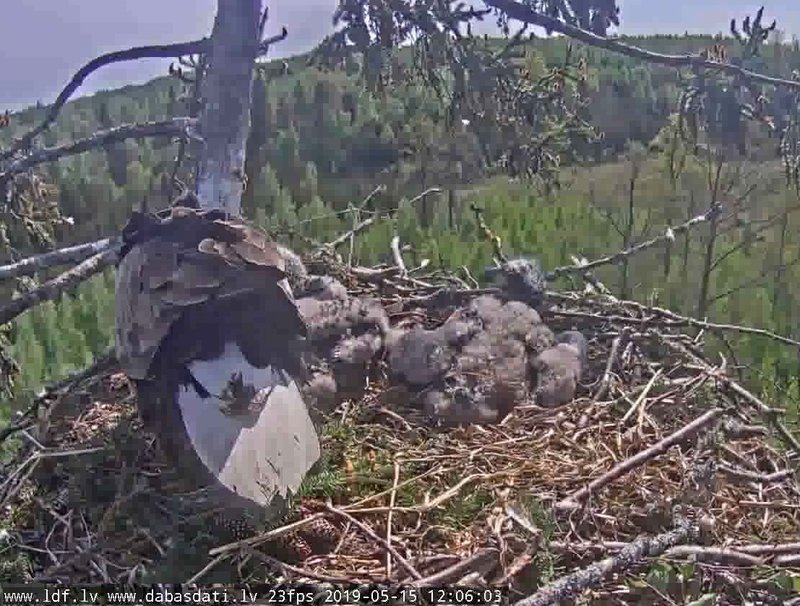 12:11 Riks was chewing the tail feathers of Raimis. 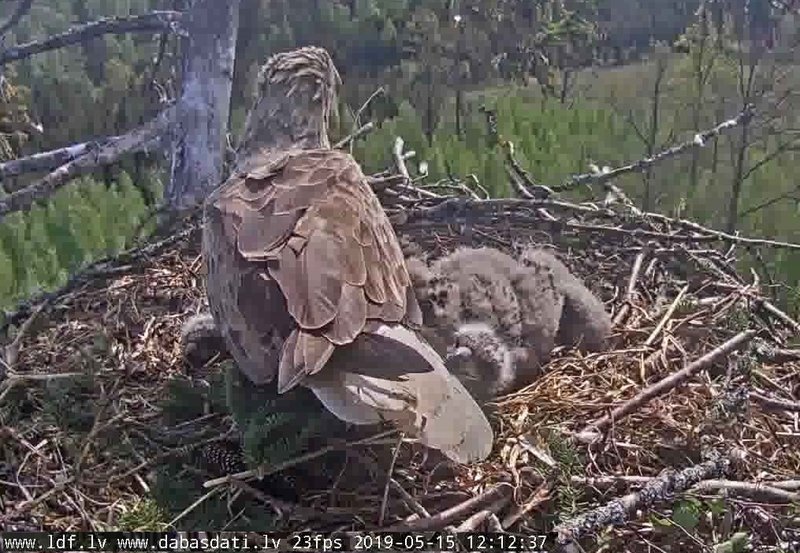 he got up and disturbed the chicks. Riks punished Mika. who is grumpy now?! 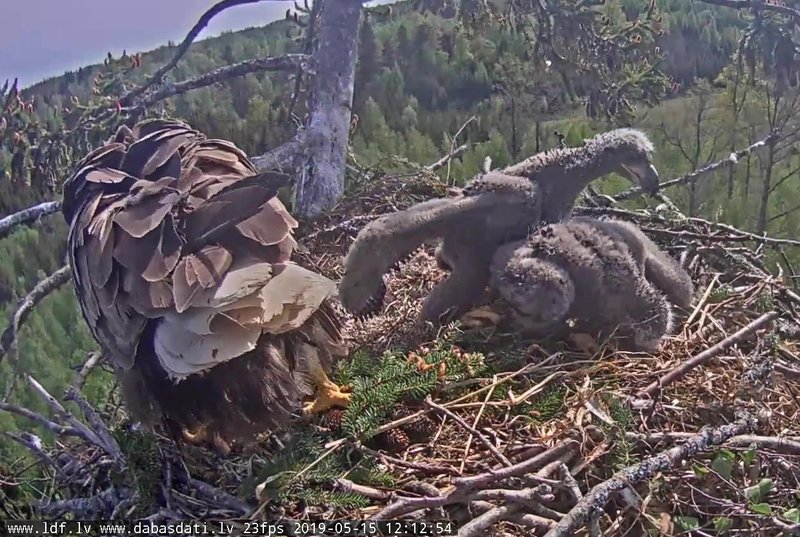 they have been chirping all the time he has been there. they are hungry and becoming impatient.
Top

12:15 Riks saw something in the sky and tried to call in adult voice, with his (her) neck extended high. 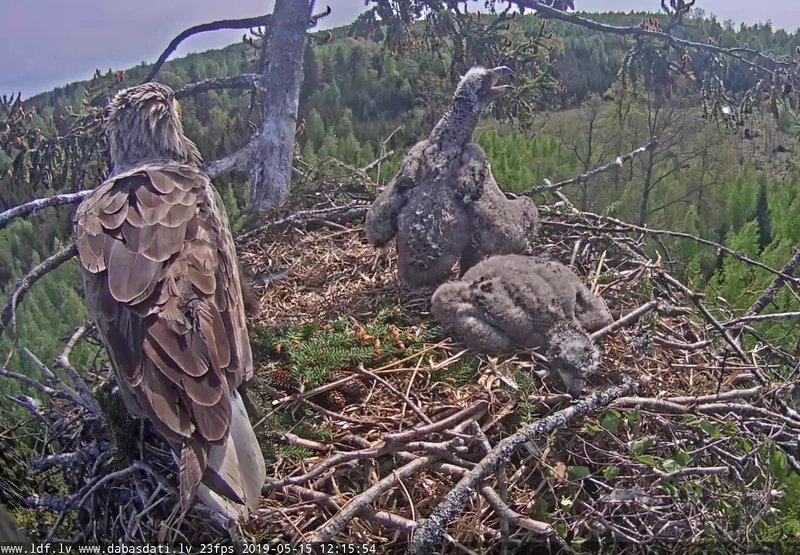 This Mika will never learn her lesson

Each time it tries to balance for the PS position, it is falling down on "Saint Riks". For him it's a good reason for another cruel attack.

Mika in Romanian is Small ! (it's written on GT Mica and pronounced Mika).

But I see that even the little food it had yesterday and this morning, changed it to Big !! 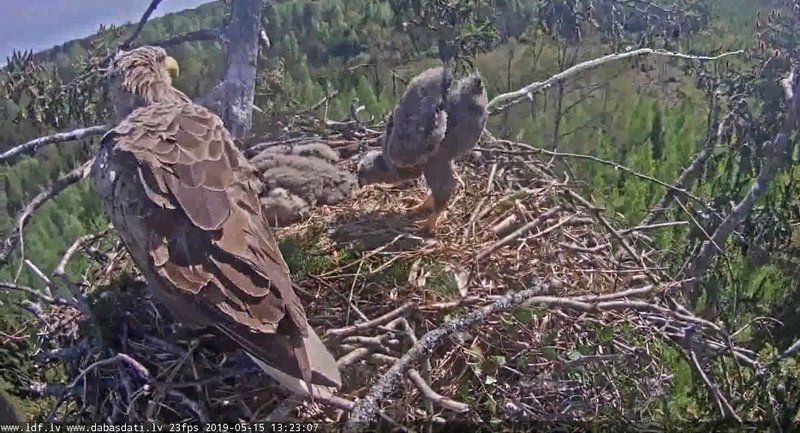 13:42 Raimis saw something in the sky and called. 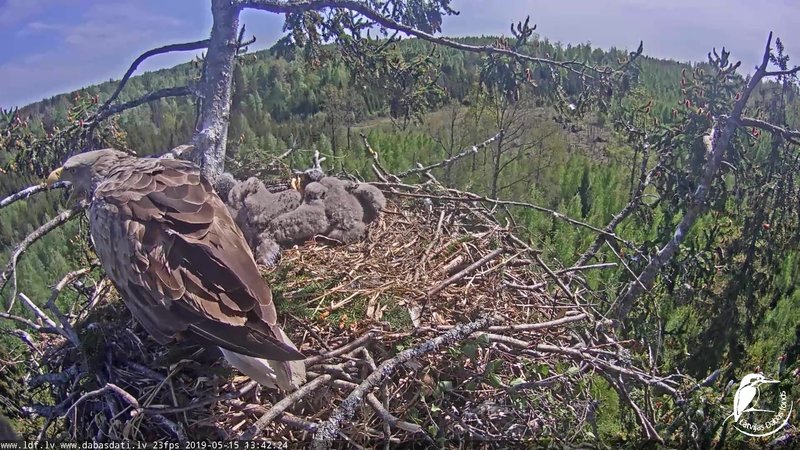 he was looking up in the sky... 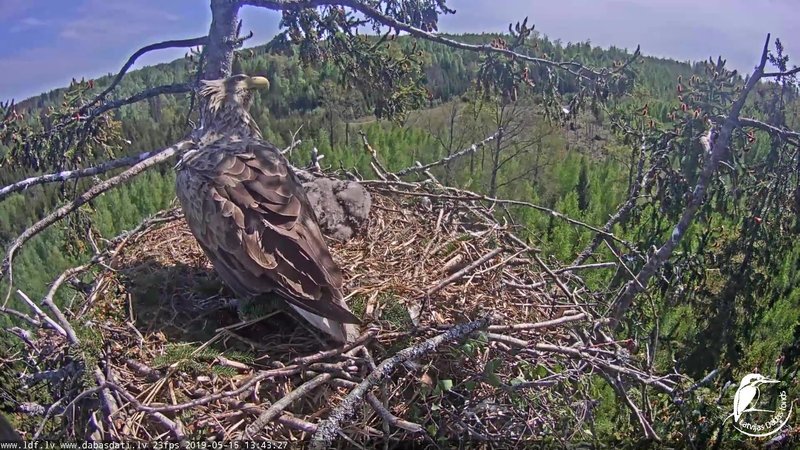 .. and he called more. then he looked in the sky for quite a long time. 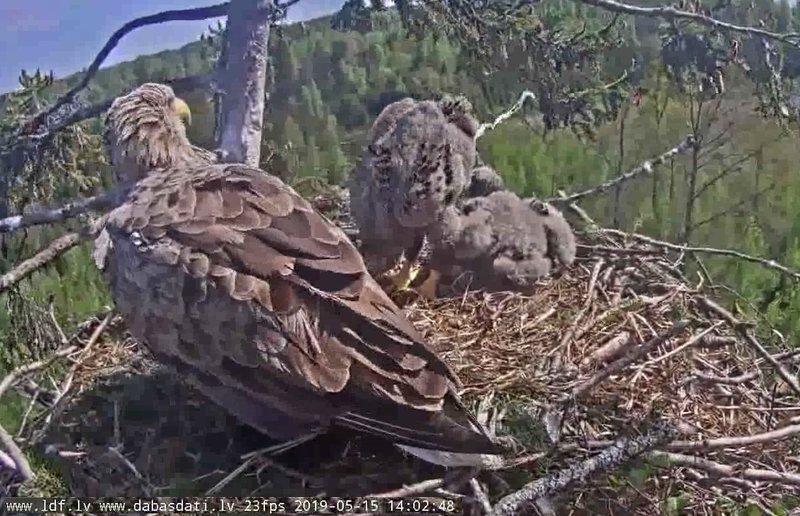 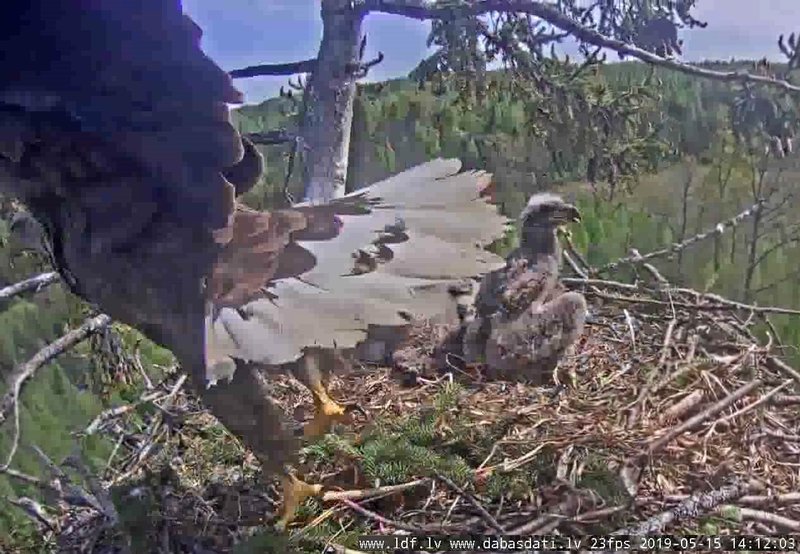 this was a very interesting article. thank you Liz for looking it up for us!

i think that especially the beginning of the article helps us understand the mechanism how sibling rivalry works in the natural selection of birds of prey.

When owls, falcons, hawks or eagles lay their eggs in late winter or early spring they cannot be sure what the food supply will be to support the young some one to four months later as the chick's food demands become greatest. For millions of years nature has been experimenting with how best to resolve this issue.

The challenge for a species is quite simple. Nature wants to produce the most young that the habitat will effectively support. The system our raptors have evolved is quite ingenious. The balance is between developing a system in which the parents rear successfully what the habitat will produce food for versus a system in which all the chicks, if they did not get enough food, get collectively weaker and all starve. Sibling rivalry is where the bully takes all or most of the food until that bully is full, and only then does it sit back and let the next chick get fed. This then happens to the third chick. This means if lots of food is available then all three chicks will get fed and survive -- but not always will all chicks survive. This is nature's successful plan but not a plan that is easy to observe.

These species have worked out a fine scheme to insure that the most chicks survive under different levels of food productivity that might prevail at the different seasons. Now this system may seem harsh to us who get emotionally charged but it is a system that has worked well for the species over many millennia.

i have underlined the sentence in the end of the quote. i hope it will helps to relieve the stress that we are bound to experience while we watch these nest cameras at the nests of birds of prey.
i am not immune to this stress either but i try to cope with it.

the worst case that i have witnessed was at a LSE nest in 2013. i assure you that what we are seeing here is nothing compared to that. after that event i decided that i will never watch any LSE camera before there's only one chick left.
you can start reading about this from here either forward or backward:
viewtopic.php?p=252306#p252306 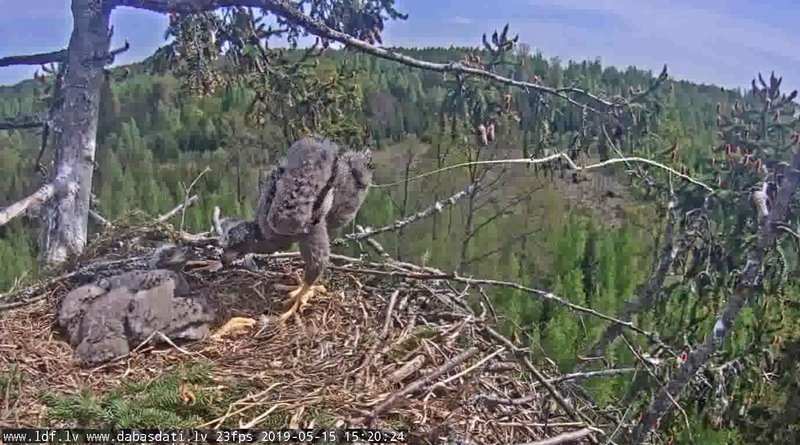 15:28 Fish song by Milda. She lands on the right branch

It's a cute carp.. big and with head 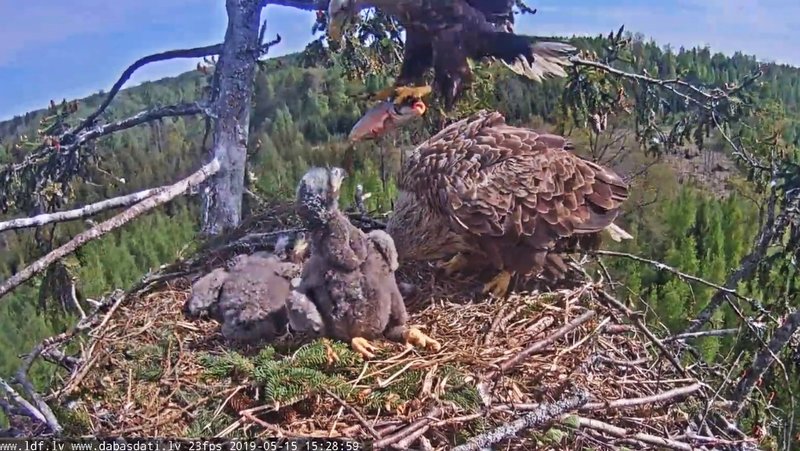 15:29 Raimis jumps on the left branch and flew away
Top 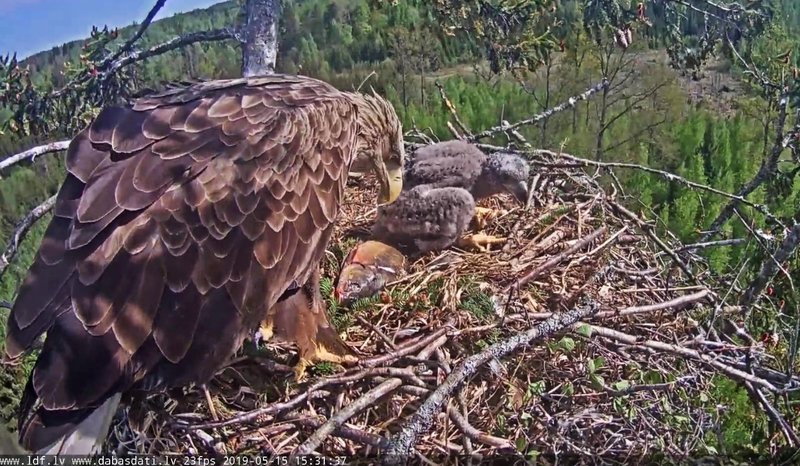 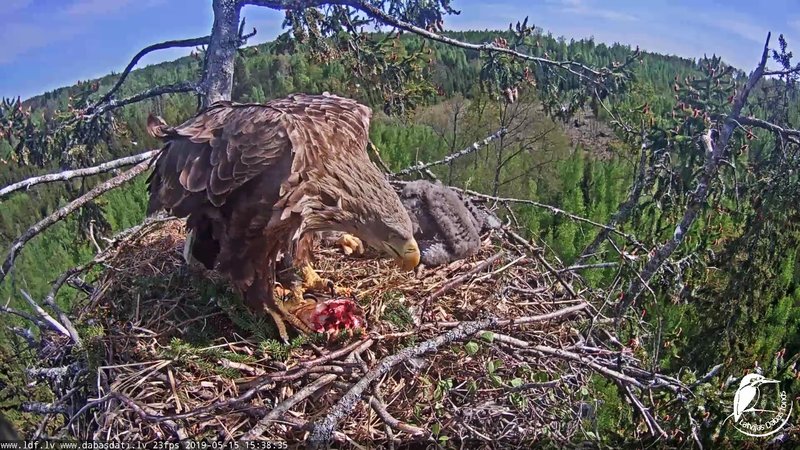 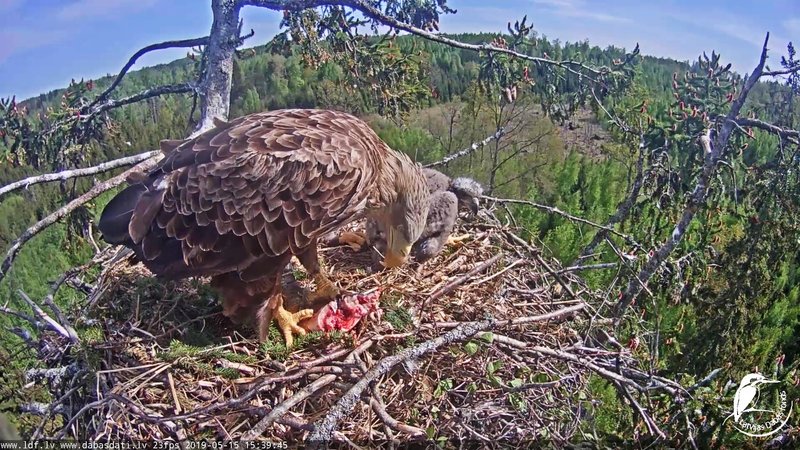 The fish is big. It should be enough for both 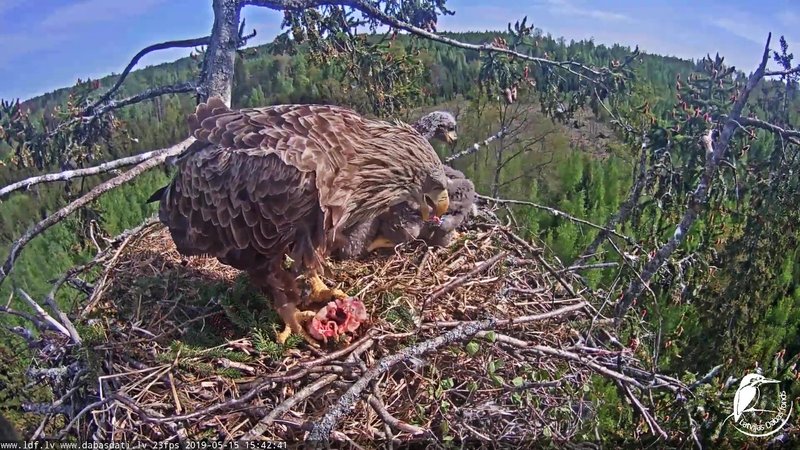 Half fish is still there... Mika's head is down again 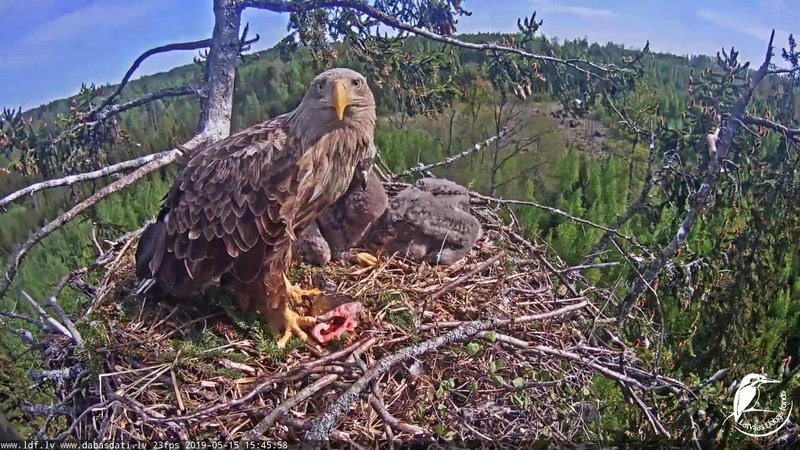 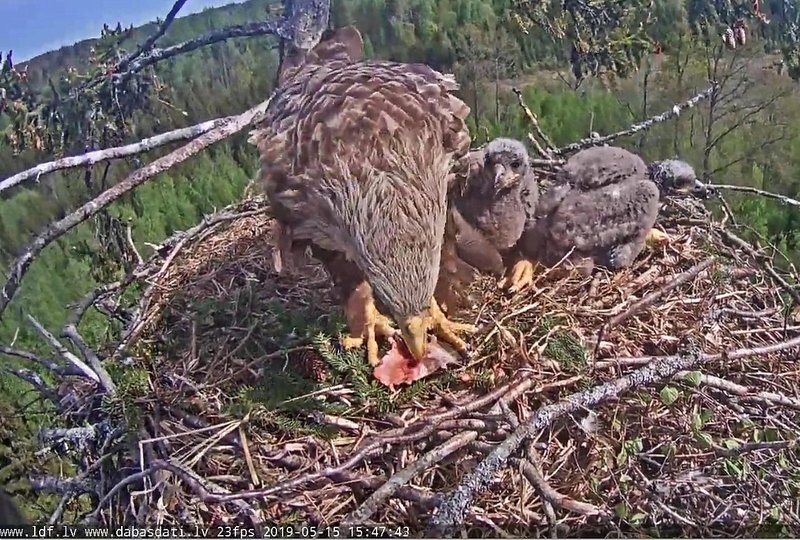 Riks with his huge crop. 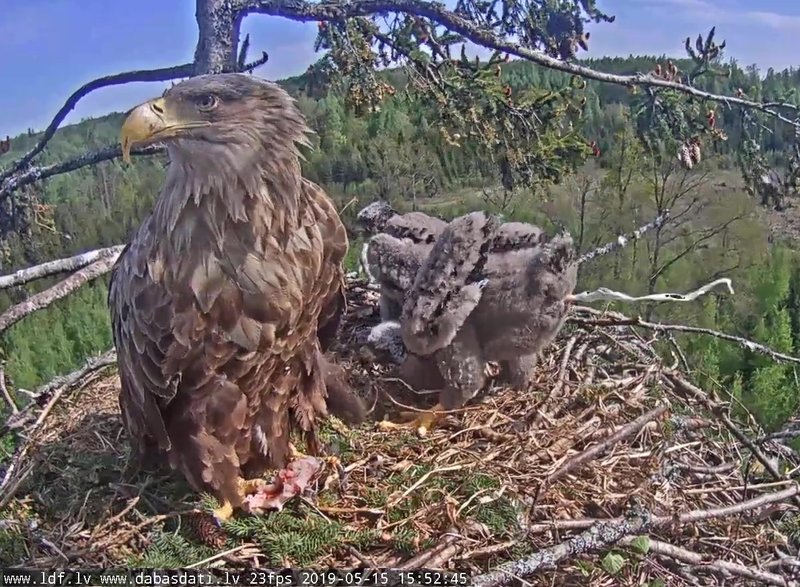