I like the K's, especially in honor of Karl I.
I also think special names starting with any letter would be nice for our survivors.
Helen S.
Top

Thank you, asondheim, HelenL44 and Katerina, for your thoughts and words!

Also I am of the opinion that the storklets realize the missing brother or sister.


"Death of a Bird: Mourning and Advanced Cognition in Birds":
http://jonlieffmd.com/blog/death-of-a-b ... n-in-birds

Birds show much greater intelligence than would be expected by comparing their brain to a human.
...
Despite small brains, which have been called “primitive,” birds show a wide variety of cognitive and social abilities. The finding that jaybirds appear to mourn over a dead comrade shows how little we know about the inner lives of animals.

While the researcher’s conclusion was that the birds were sitting for two days without foraging to find out where the danger was coming from, it certainly appears that the jays were grieving.
...
The question of emotions in animals is hotly debated, but there is no question now that many animals experience a wide range of emotions. For years it was thought that the size of the brain determined the advanced mental characteristics of animals.

But, there is now increasing research demonstrating advanced capacities with very small brains. For example the tiny hummingbird has advanced memory and future planning, including knowing exactly which flowers that they have already visited.
...
What Do Birds Know?
The most intelligent birds appear to be the parrots, crows, ravens, and jays.
Birds demonstrate counting, associative learning, spatial temporal abilities, self-awareness, and tool use.

For example i'd like to remind on the Big Bear Bald Eagle nest on the "American Bald Eagle"-Thread. After the death of brother Cookie, Simba for a few days refused food, ate less, and even had an upset stomach and vomited, slept a few days next to his dead brother. A few days he was complaining as soon as a parent tried to move the dead body of his brother Cookie to the side of the nest. He missed his brother and he certainly mourned.


Mammals, birds, they have words, it just might be that we don't speak their language.


Two of my pictures of today, i'd like to add with the question: "what might they think ?" 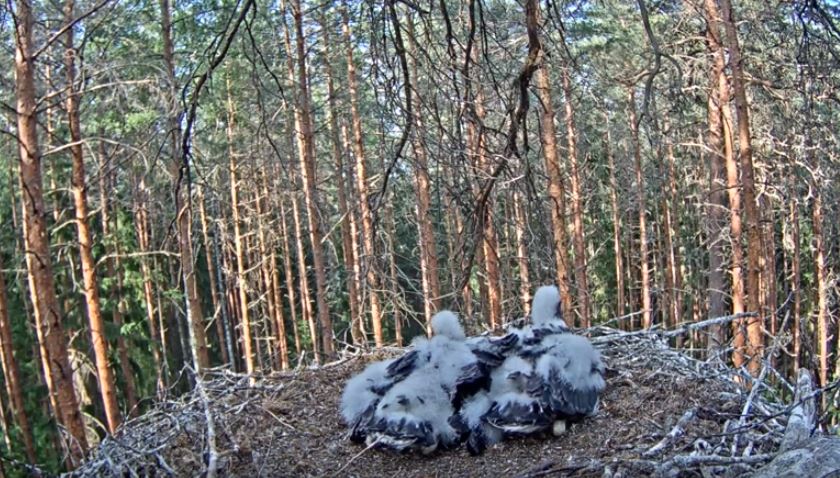 Thanks a lot, Liz, that you've done this difficult work!

I've taken some pictures from your video which show a heavy attack and the storklets fierce reaction. I cannot help but deeply admire the storklets for their steadfastness and great commitment to defend their lives. 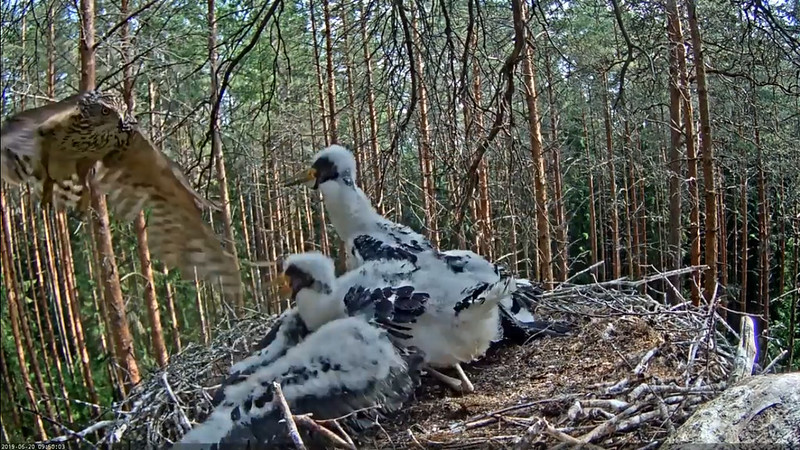 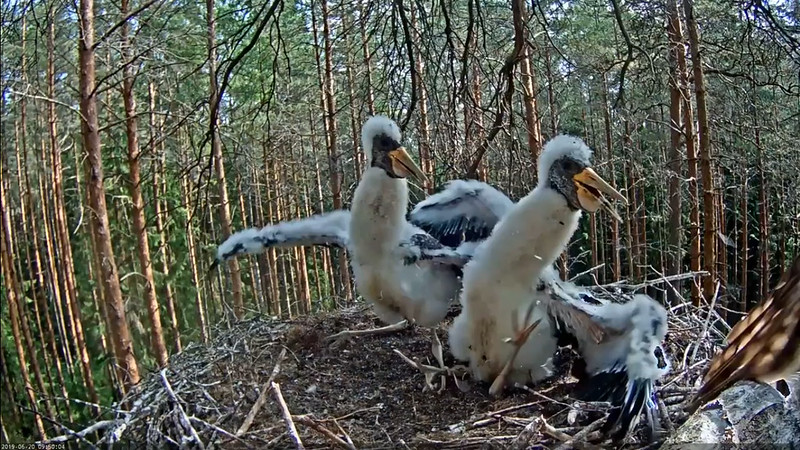 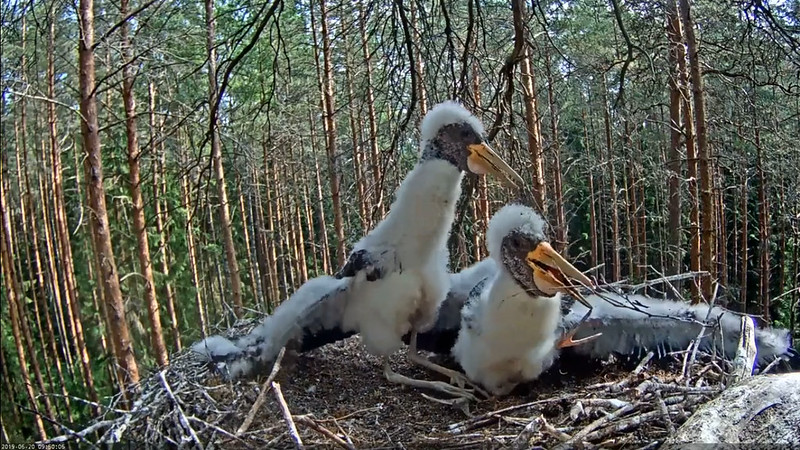 , many thanks for the very interesting report. This supports the opinion of many of us that birds know much more than we think.

I haven't known the story of the Big Bear Bald Eagles nest. It's impressive.
This is almost a proof that birds have feelings.

Thanks a lot for your impressive pictures of that severe attack at 10:22 and for the two last ones. Yes, - what did they think!?

Lastly some good night pictures. It took so long because I had problems with my photo hoster. 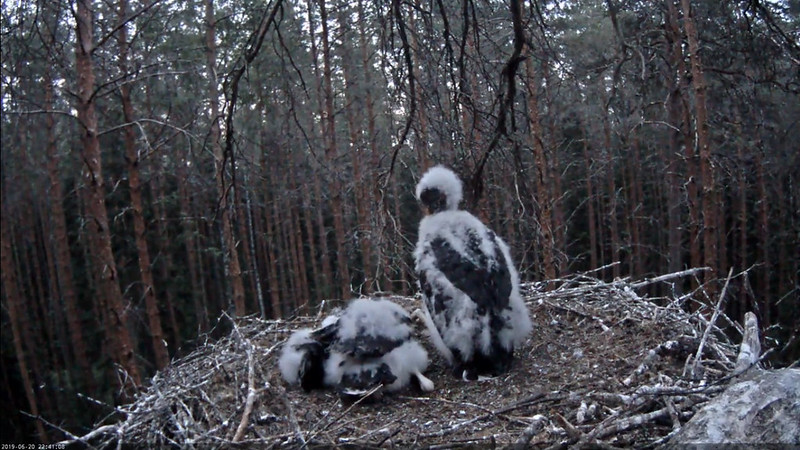 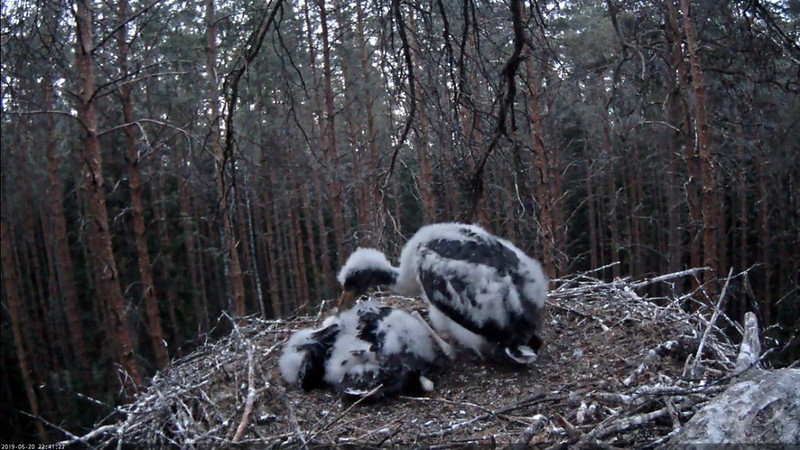 23:15:09 Still up. This storklet was up already for quite a while, and also later it did not sleep. 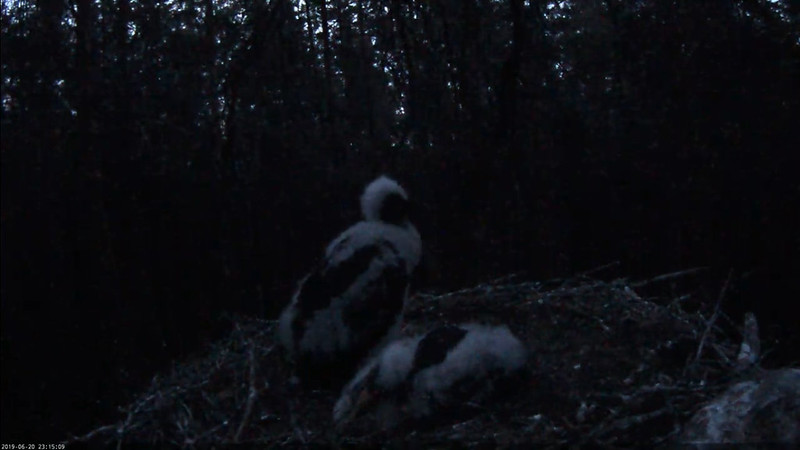 , the nest is really "empty" without the third storklet. It is a big loss.

They are sleeping :)
Top

Thank you all for pictures and comments.

Anne, I think they are sad.

At the Nest of Ozols I saw that siblings miss each other. I will never forget the behavior of Ziluks (male storklet), as Zikuka (female storklet) slipped from the branch.
He was incredibly shocked. He stood on the branch for a very long time and looked down. They communicated with each other. And both were overjoyed when both were reunited. The ornithologists have brought her back to the nest. But only because she had a transmitter. Usually they do not intervene.

5:39 Our storklets are sleeping . I have to say, I was afraid to open the camera. But all is OK with the little ones.
Top

5:50 Storklet is preening it's sibling

6:02:49 loud breaking branches on the ground. Sounds like an moose

6:03:15 someone is here on the ground. Storklets are alarmed. 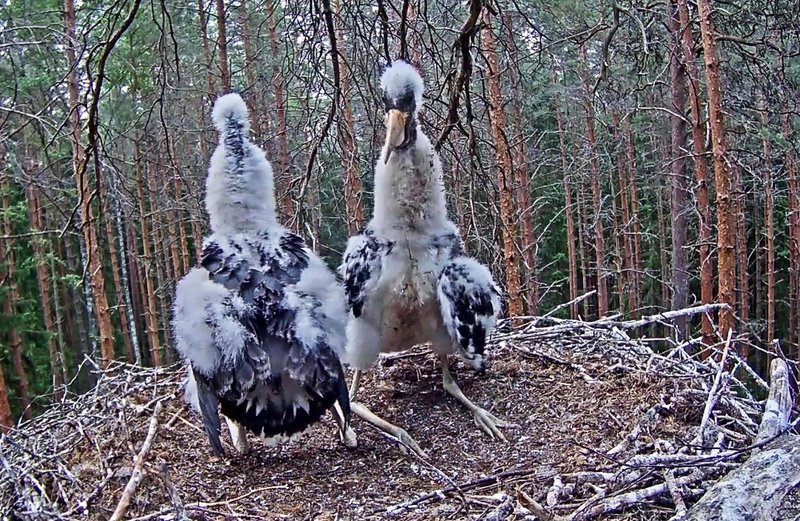 6:04 I hear our third storklet

I have to check it again

But I heard twittering from a storklet far away
Maybe I'm wrong. Please do not be angry. It is very early - I have to check.

Storklets are looking downwards, clattering with their beaks and calling strange have the parents been to the nest since the attacks began?
Top 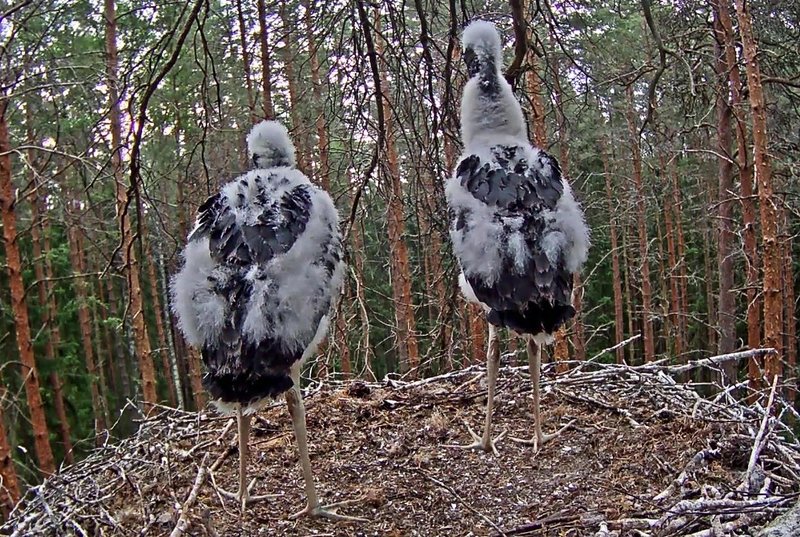 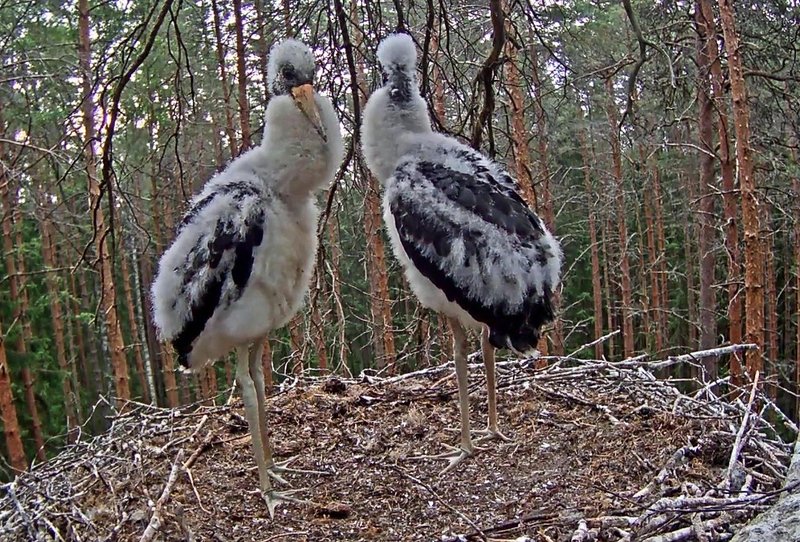 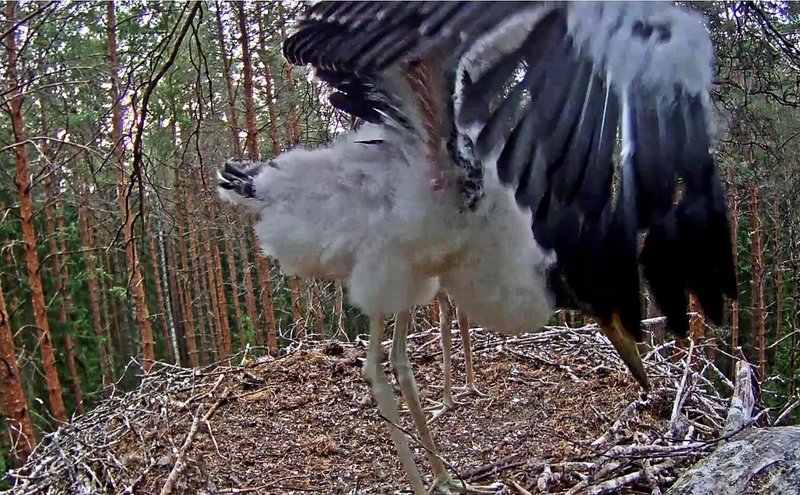 There were four feedings.. Karl II 3x and Kati 1x .. if I remember correct.
Top As long as there is no bad storm, it's good that it's raining. 7:17 They are far from relaxed. They react to every strange noise ( A bird called) 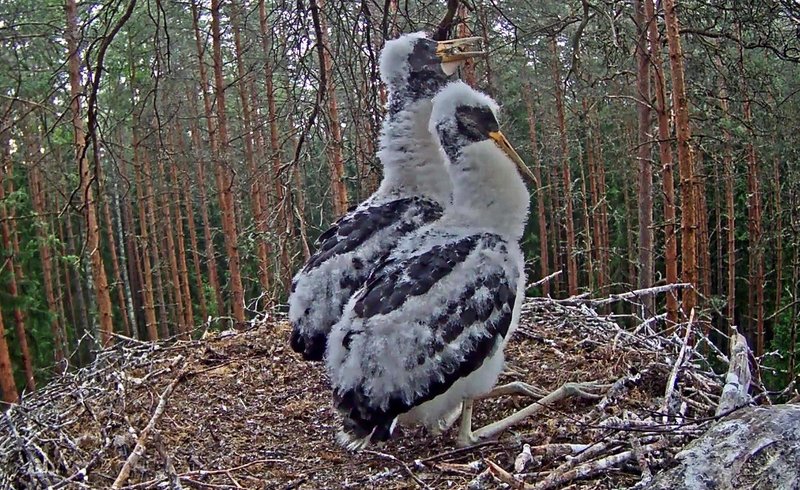 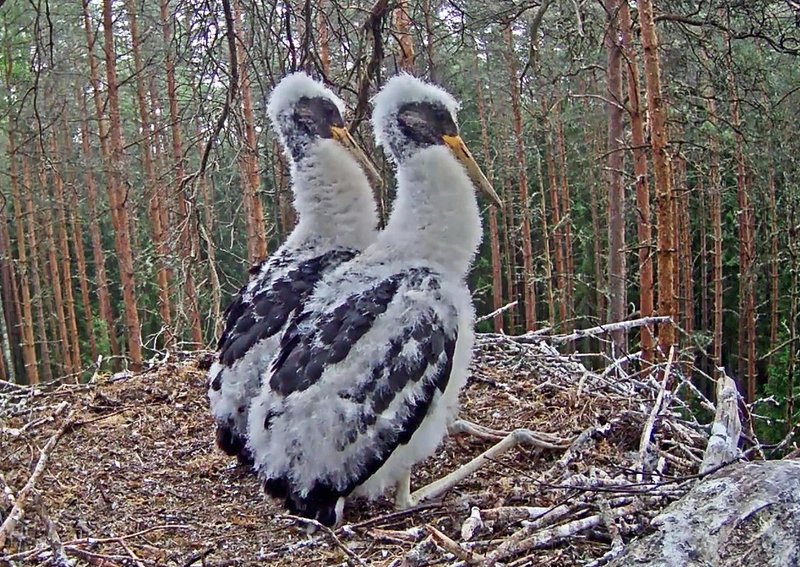 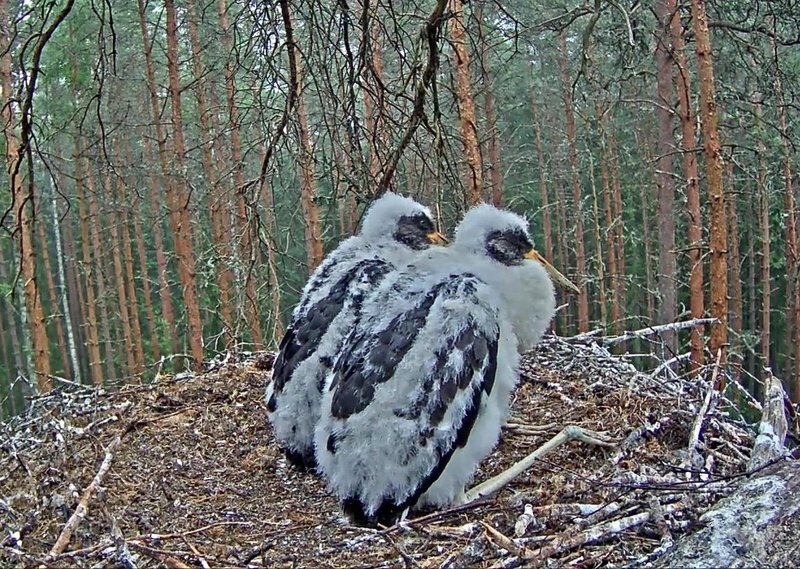 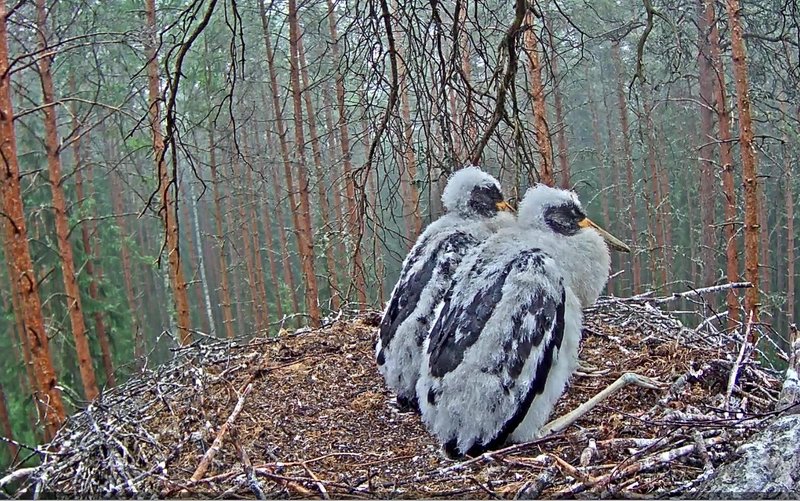 somone is on the right

8:14 scratching his head , while standing (what a progress!)
Top

They growl and clatter with their beaks. He is probably sitting close to the nest on a branch

The sitting storklet is twittering..
I hope we do not experience such a long threat again. Too much for the little ones and for us too :(
Top

8:29 GH has change the position.. was flying from the right to the left.

8:32 It seems OK now,
Perhaps they react to a harmless bird? They are still very excited (me too). They have not forgotten what happened yesterday.

8:33:36 scratching the head while standing again

Every bird is a potential enemy, everything that moves on the ground is an enemy ..

I think, It will be a while before they can distinguish again who is harmless, who is dangerous