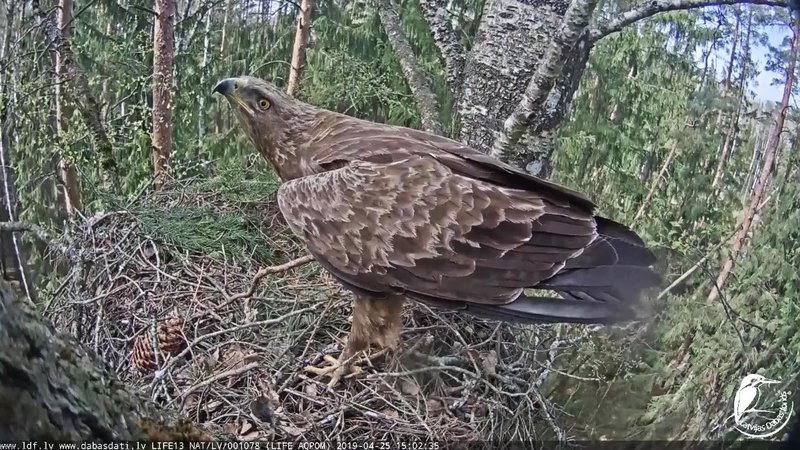 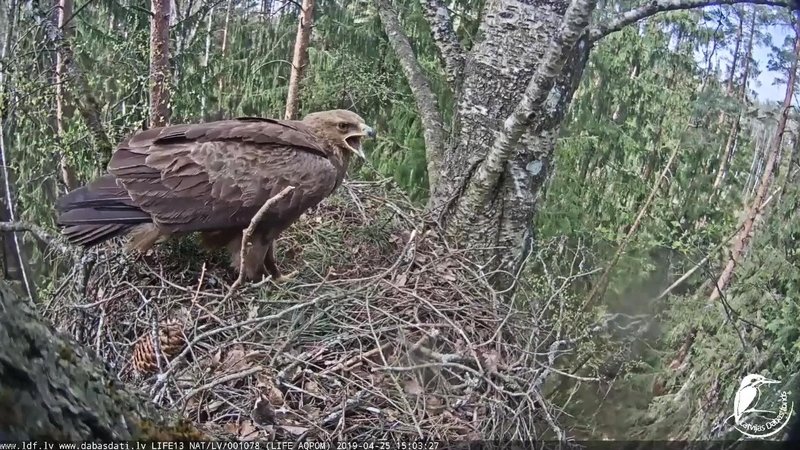 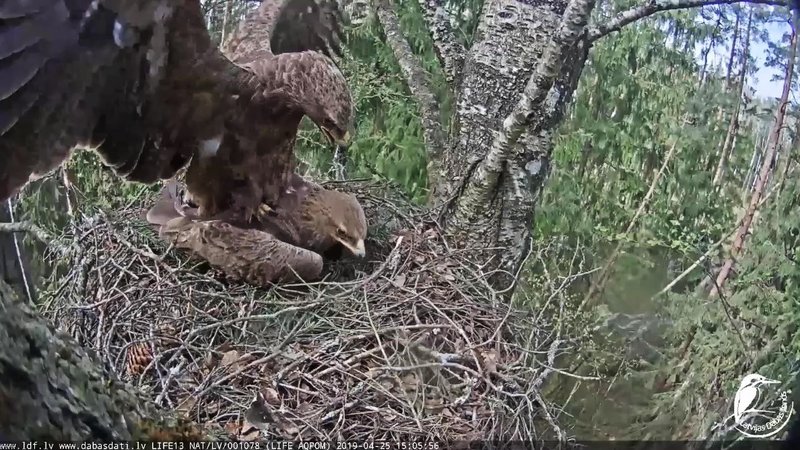 Liz, I think your images are from the 25th and not of today?
Top

Eagles working on the nest in the morning 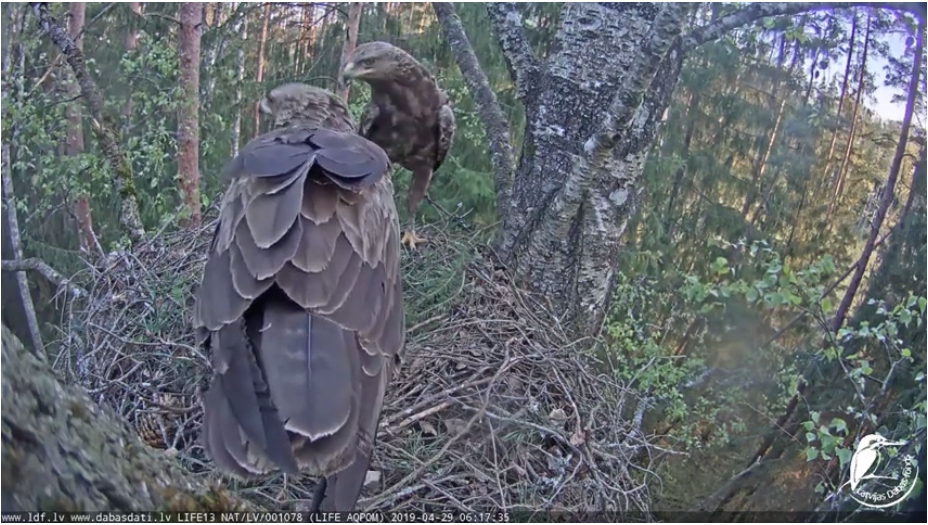 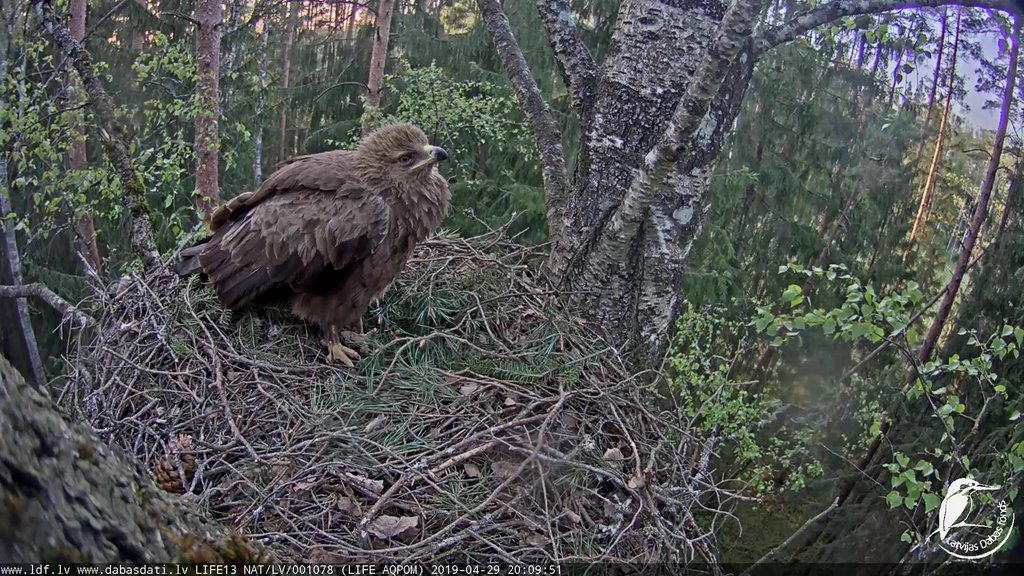 I watch an eagle sitting and now standing and moving on the nest since 17:40 cam time 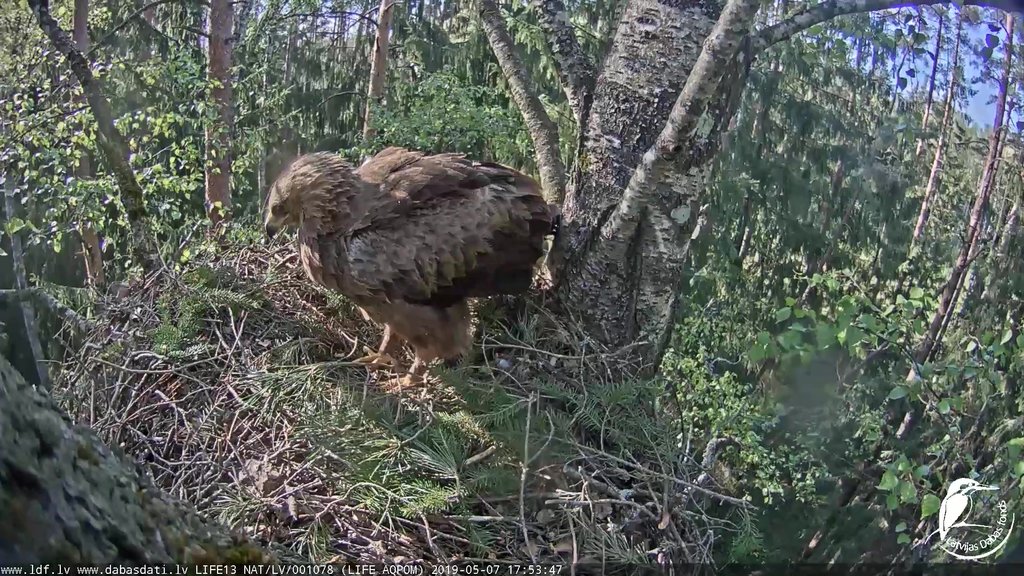 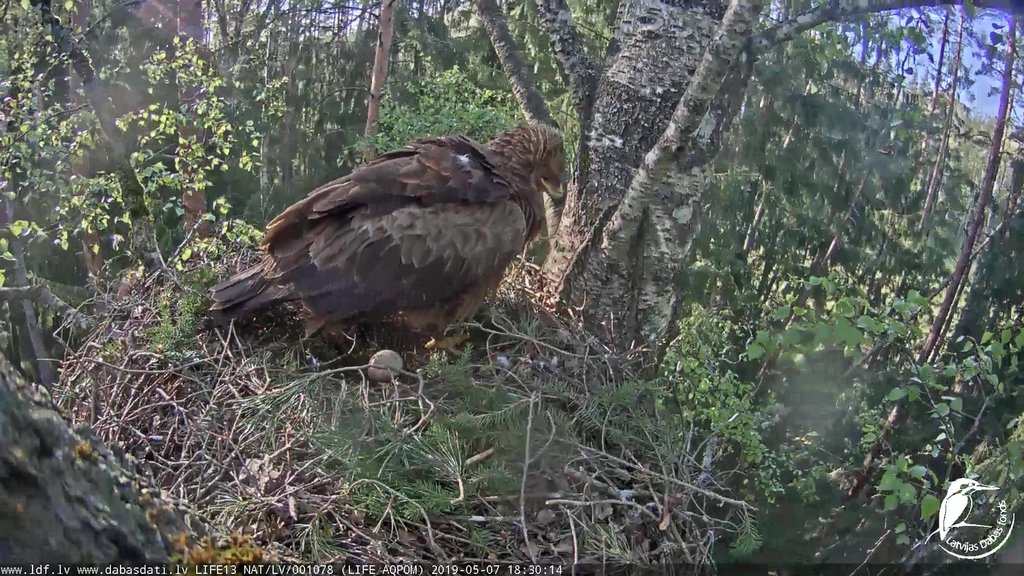 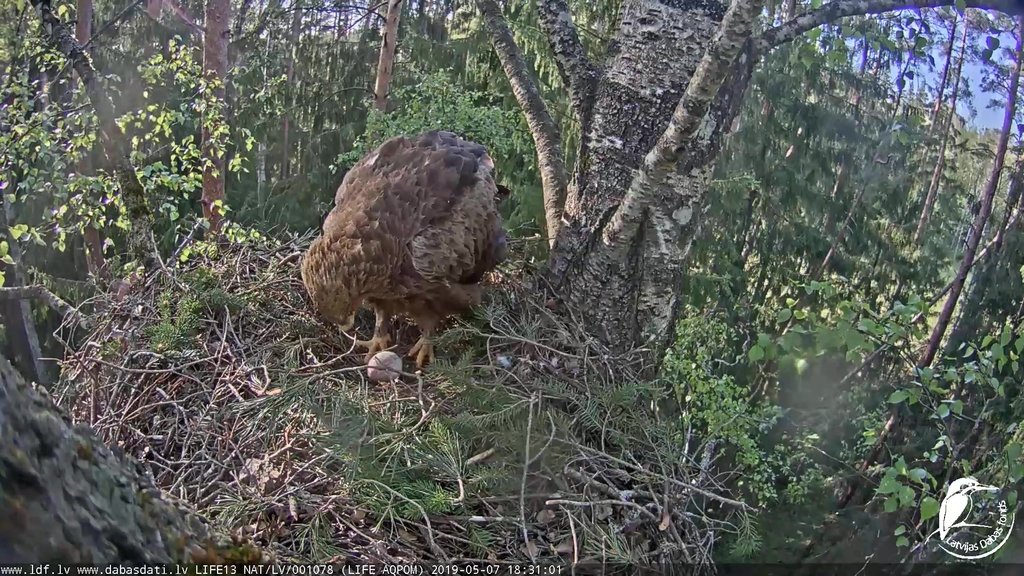 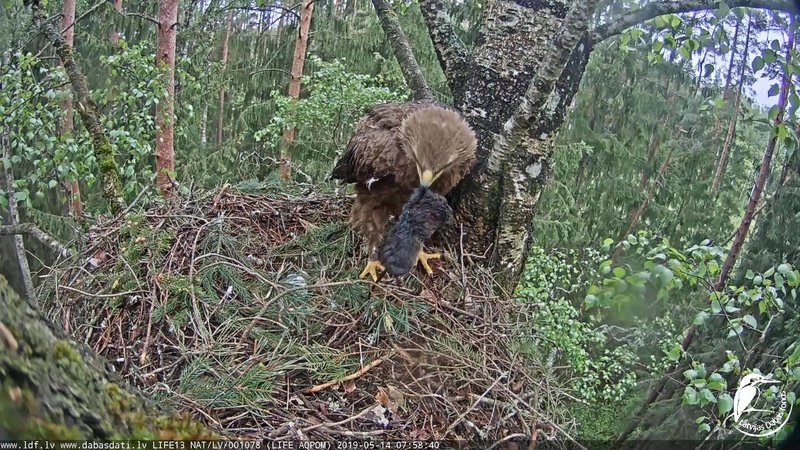 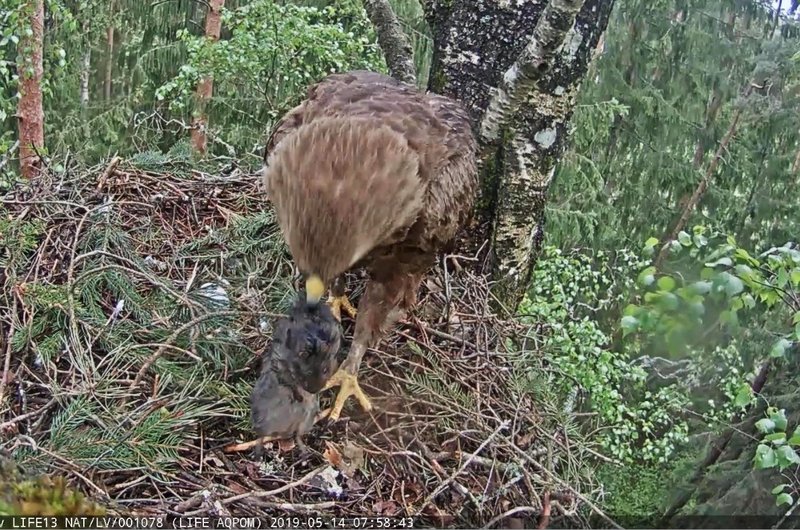 It has big teeth- so it is a vole 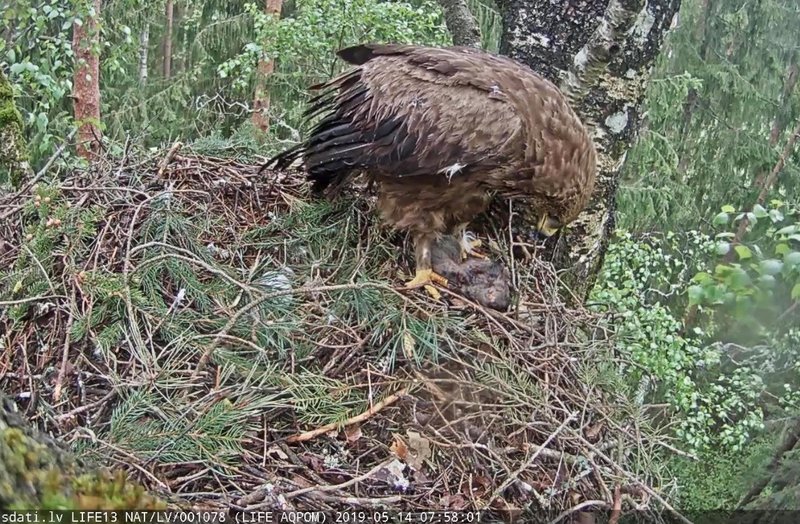 They are named Laura and Rūdis.
Pictures by Lianaliesma. Taken from the DD forum. Thank you 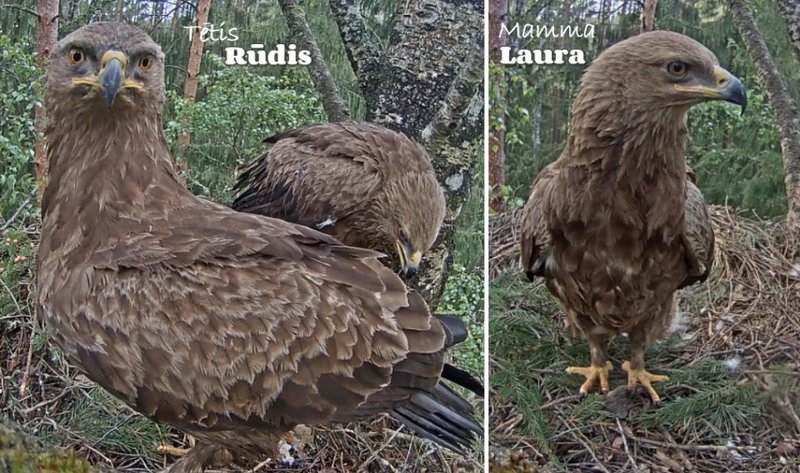 unnoticed this time. seems so. but of course not from you! thanks, guest

Is it this cam?
The name of the female is Laura, if the egg is OK the chick must hatch soon.
Top

asteria, yes it is the camera. Male is named Rūdis

13:41 Laura is preening herself 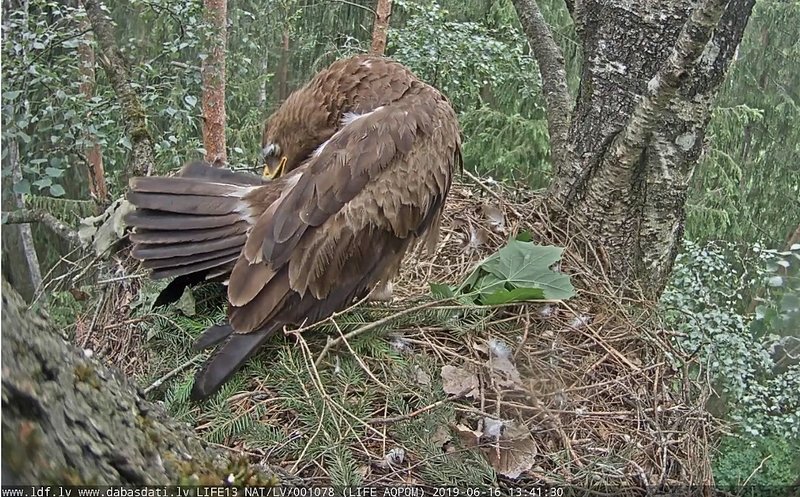 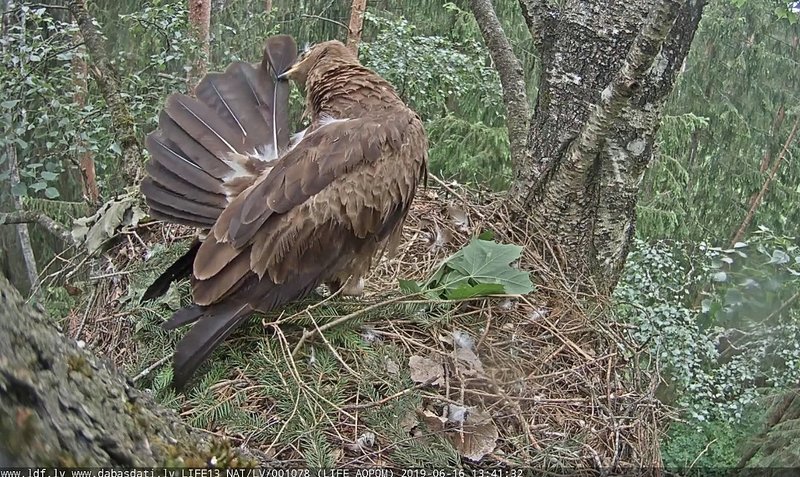 still no pip in the egg 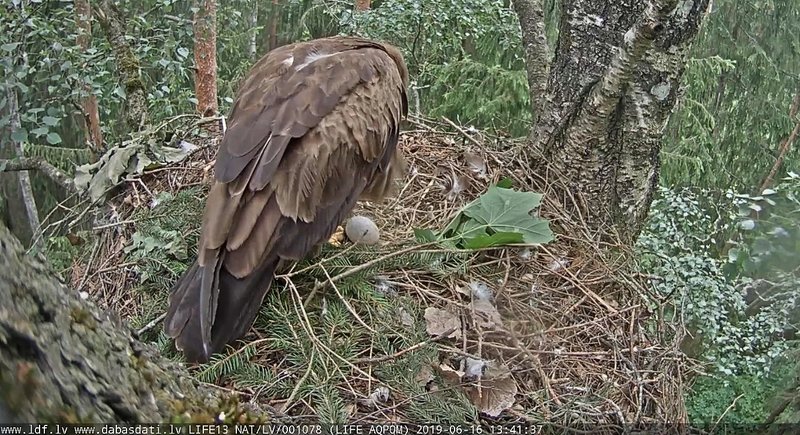 The stream is off, nobody hatched from the egg.

There was an experiment. The egg was exchanged with the second chick from another nest.

You will find original text under the video in the description!

GT:
In the nest in a birch, hatching this year exceeded the egg incubation peak, indicating that the egg is a unfertilized. At the same time, a eagle nest with two babies was found, the youngest was about three days. Both of these events made it possible to experiment - to move the youngest baby who was destined to kill, to a non-productive nest where the female was still hatching a egg. The necessary preparatory work and concerted action with the leading small eagle researchers in Latvia, as well as the Nature Protection Board were carried out.

Live public broadcasting was disabled during this time because the experiment was unpredictable and we didn't want to distract live viewers. The male brought in food and left the nest for the first time in about 5 hours. Approximately eight hours later, he re-introduced the feed and, by behavior, called the nearby female to feed the baby. The females are attracted to the nest for a long time, until they finally get into the nest. You could see that she was very excited. First, she swallowed the rat brought by the male, but then took the baby and blew up. Unfortunately, the female did not accept a radical change in the nest when the baby had already emerged instead of the egg.

Of course, one such experiment does not allow us to conclude that LSE females will never accept an strange baby in the nest, but it is clear that the LSE as a species is highly susceptible to interference in the nesting process. The female had to overcome the double stress - both the presence of the human being in the nest and the disappearance of the egg and the strangeness of the baby.....

Then a small part I can not translate...

.....
It should also be taken into account that within a species, individuals tend to have very different tolerance to disruption, so if a similar situation occurs in the future, such or similar experiment should be repeated.

What a pity. I'm sorry for this couple. The dangerous journey from Africa to Latvia was in vain.
I wish that they succeed in the next year.
LSE Anna & Andris, chick will hatch
https://www.tickcounter.com/countdown/3 ... l-hatch-in
Top

*
*
... the male LsE brought two times food to the nest with the new chick. the female did not feed it. took the food for herself and then took the chick and flew off with it.

Respect for these dedicated people who not only watch but act.
*
*
Top
Locked
53 posts