if you click on birdmap on the "Black Stork" you can read:

The Black Stork is shy and beautiful bird, living as far from human settlements as possible. Black Storks forage along small streams in forest, on fish-ponds and on flood plains as well. For nesting they use huge trees with healthy branches, mainly in wide forested areas. In Estonia we can find breeding about 80 pairs of Black Stork. Several specimen are tagged with transmitters and let us know about their behaviour and migration.
In Eastern Europe their numbers have greatly declined over the past thirty years, most likely due to land improvement (melioration) and the diminishing supply of suitable old forests for nesting.

and you can see this nice BS photo by Josep Tuvi 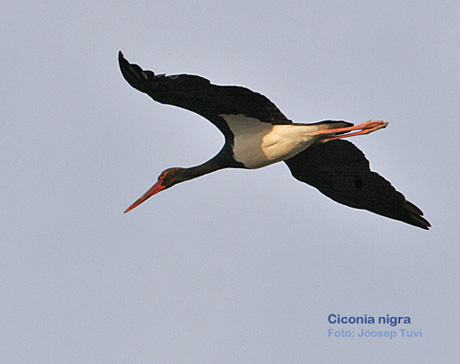 .
ORU - infos on birdmap: Juvenile Black Stork from webcam nest. Started its first migration in 10.08.2019, leaving second sibling in nest. Transmitter installed in 12.07.2019. Transmitter is obtained with help of webcam watchers in 2018, then used on juvenile (Maru) of last year. Maru perished (poached) in southern Egypt and transmitter send back by kind Egyptian colleagues and Estonian embassy in Kairo. So we re-use this device here to track Oru.]

ARU - infos on birdmap: "Juvenile Black Stork from webcam nest. Started its first migration in ??.??.2019, after ?? days as second sibling in nest. Transmitter installed in 12.07.2019. Aru did get some slight injury probably doing flight exercises in the woods, but that did not affect on flight abilities. All food brought by male was eaten by Aru after Oru left for migration and that was a bit too much for one juvenile Black Stork. But enough food enables better start for migration probably."

started on Aug. 17, after 7 days as (ORU) second sibling in nest
Top

EEDI and ARU in Latvia 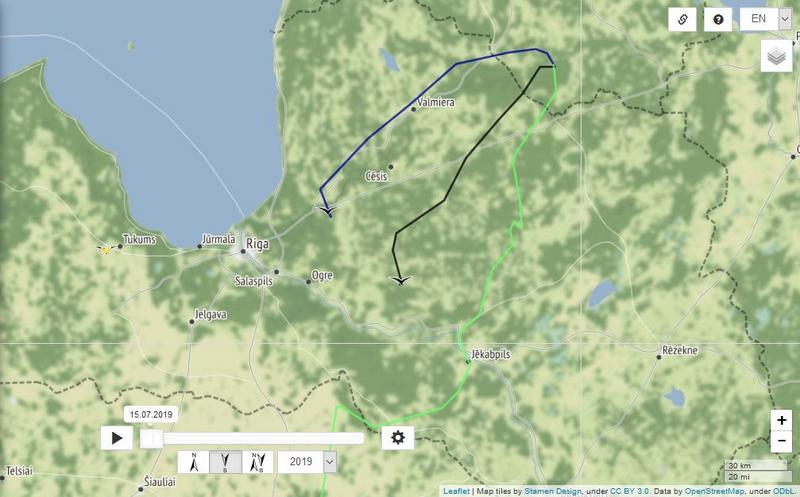 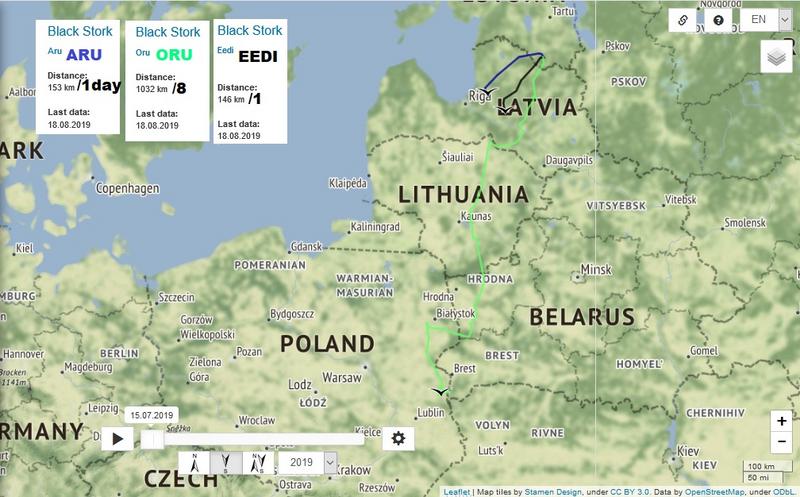 There are data now

in her summer area 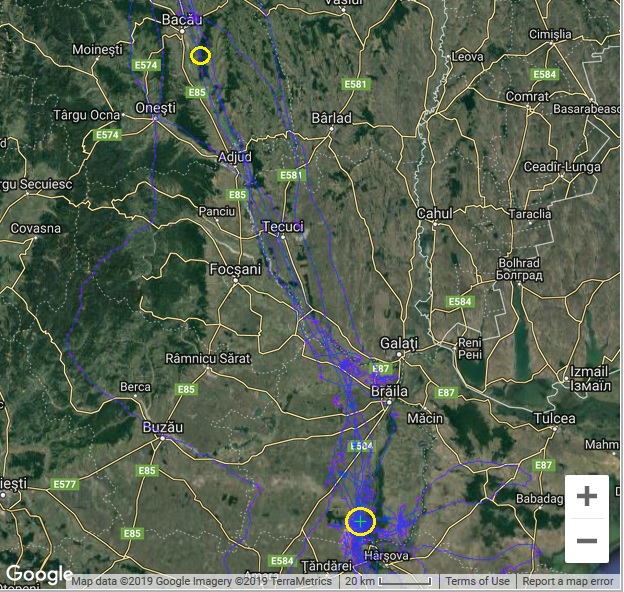 in her "summer apartment" 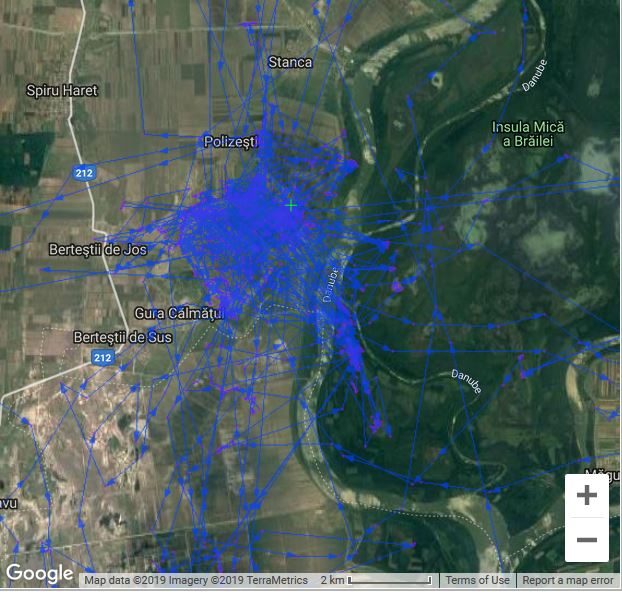 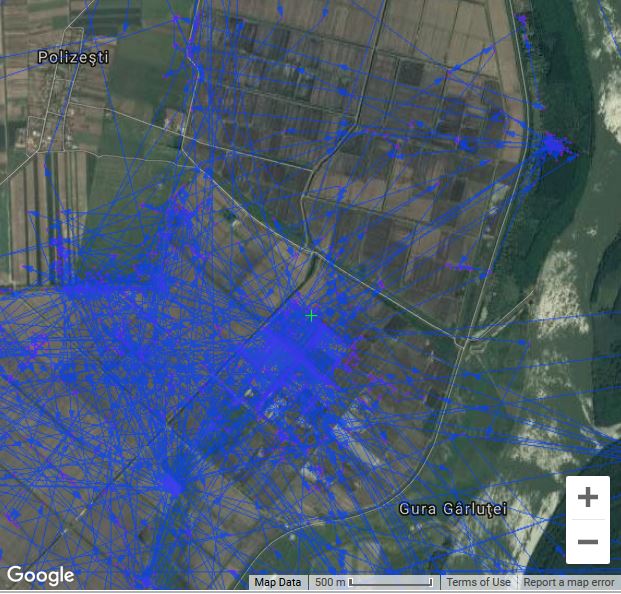 2016 (first migration): Mare arrived to this area on Oct. 1, but continued to migrate 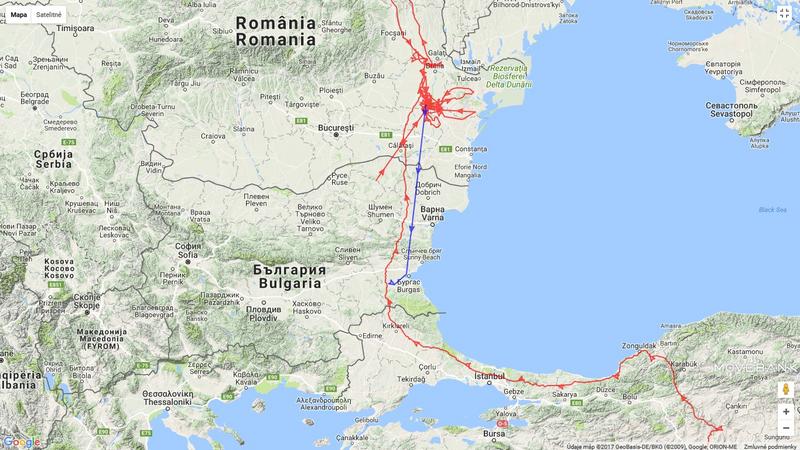 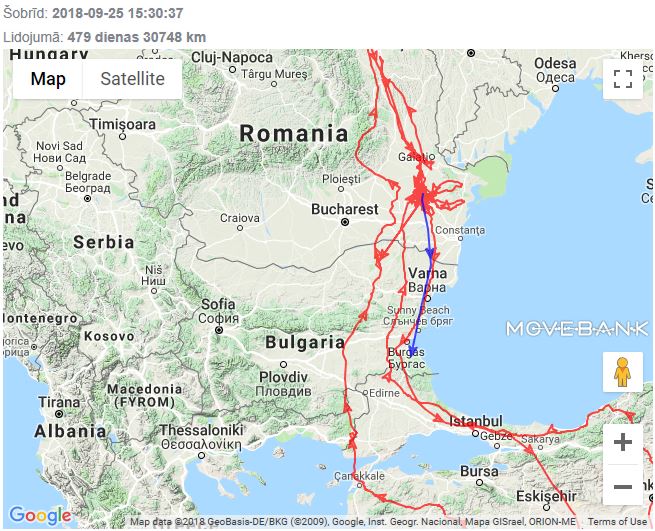 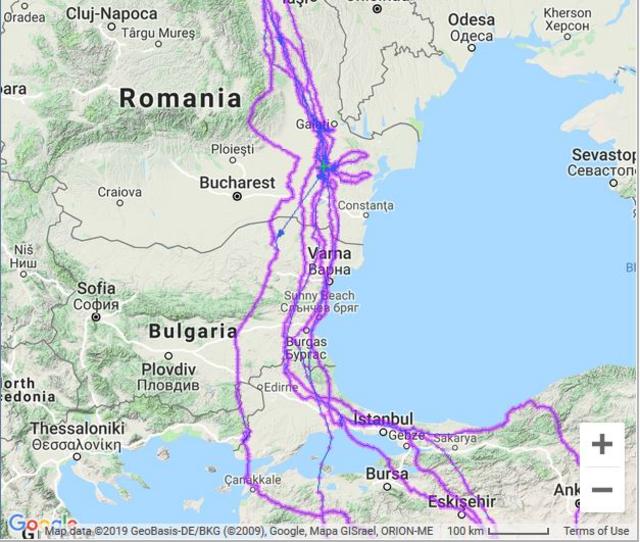 MARE (not the currently situation)

FB Melnais stārķis. Dzīvības lidojums:
Our Mare has finished this season :) Currently she has started her migration and is already in Romania :) Have a successful trip to the warm lands! 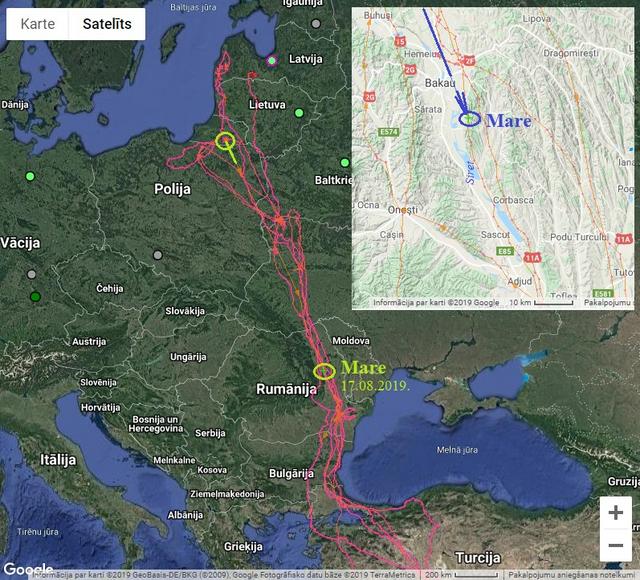 Eedi stayed in the area - he flew from forest to his feeding place (evening meal?)
(Oru stayed too, Aru without update)

here you can see the change on birdmap 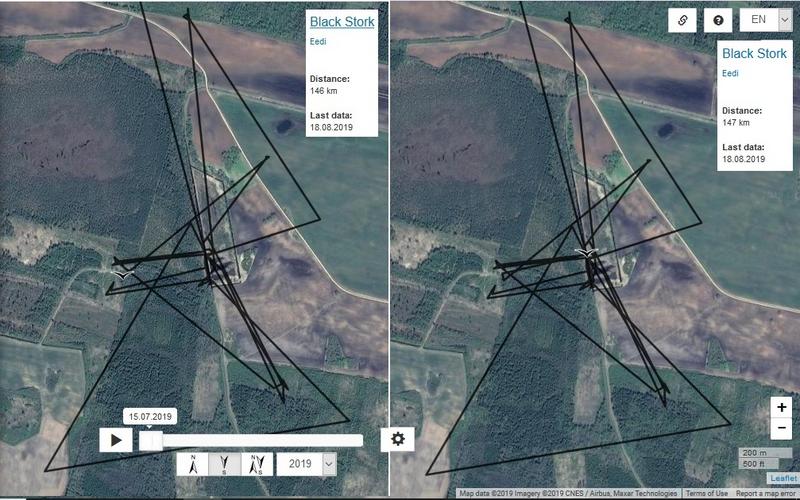 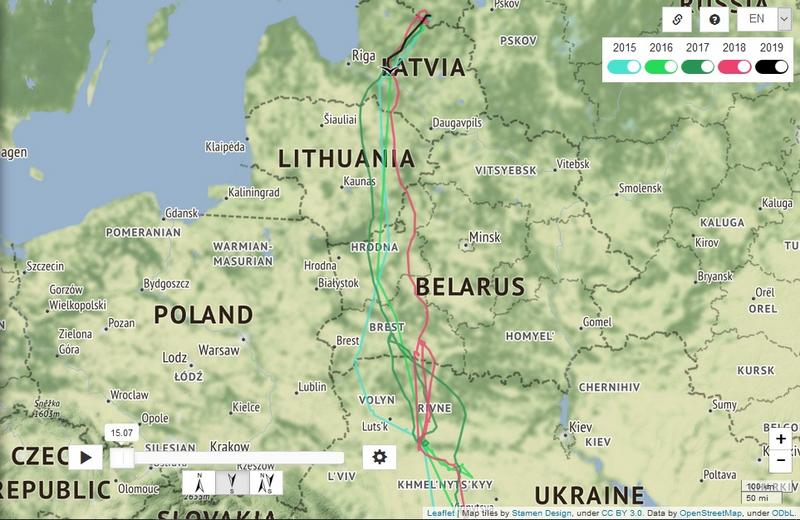 - Some birds migrate without using stopovers, whereas others need to stop at least once during their migration: 1-5 stopovers were observed per bird
- it is unlikely that the storks forage near their night roost, just after or before their migratory flights
- for the birds that do make stopovers, the tracking data reveal both inter- and intra-individual variability in the use of stopovers over the two migrations, suggesting a lack of fidelity to such sites
- the number of stopovers was similar for potential breeders and non-breeders, although the length of stopovers was significantly longer for non-breeders than for potential breeders
- no difference in stopover duration was found between autumn and spring migrations

Tamás, E.A. (2012). Breeding and migration of the Black Stork (Ciconia nigra), with special regard to a Central European population and the impact of hydro-meteorological factors and wetland status. PhD thesis/dissertation, University of Debrecen, Hungary.

today is the "later more"

2/edit 1 - Poland: CNIG 04 (:shock: another one - CNIG 17 - perished probably already too or the device failed, last data Aug. 5/edit: that was probably the starting point, not the end - thanx for hint to my FB friend H.K.

CNIG 17 edit: deleted - that was mistake

CNIG 17 edit: deleted - that was mistake 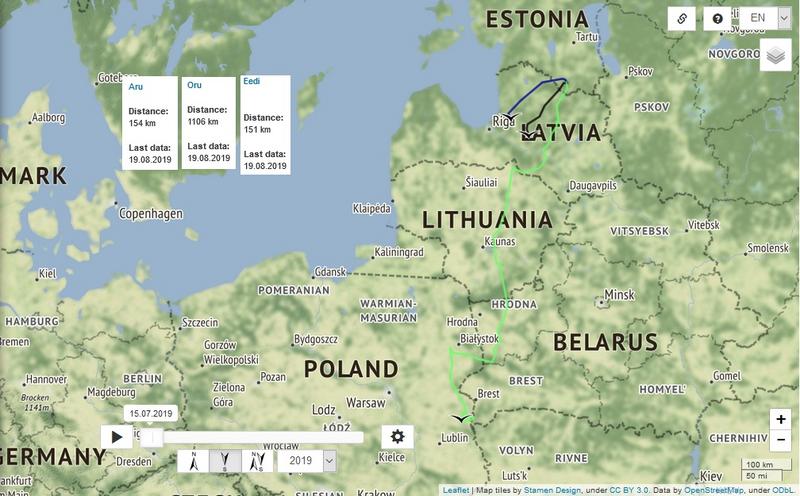 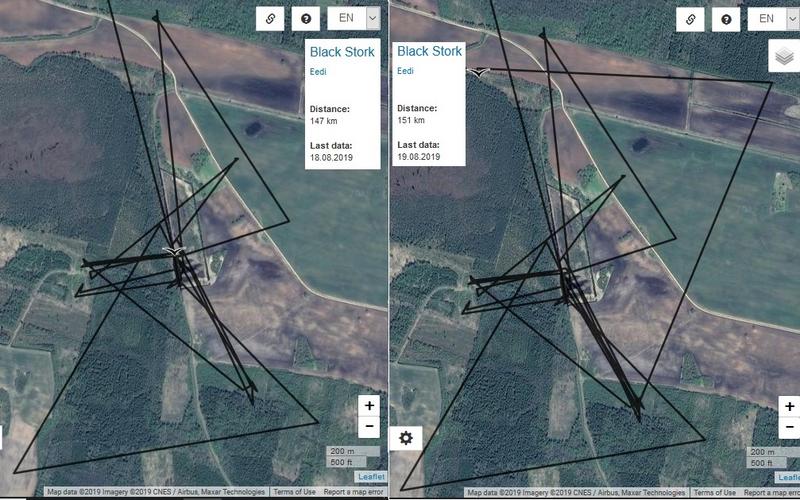 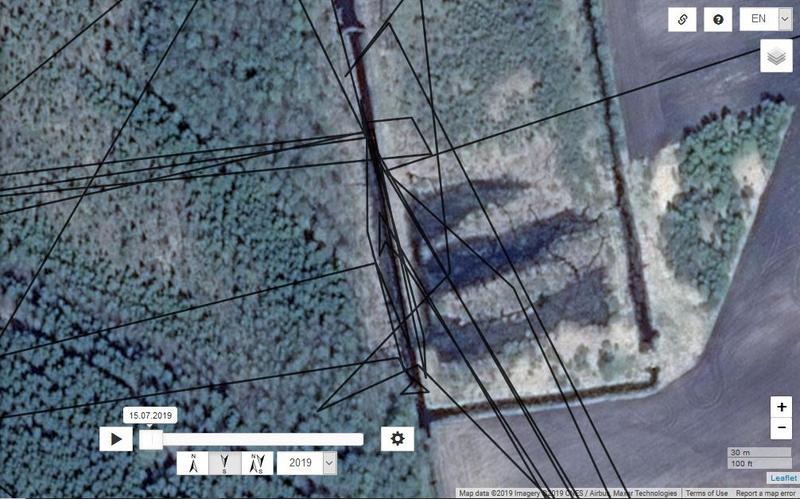 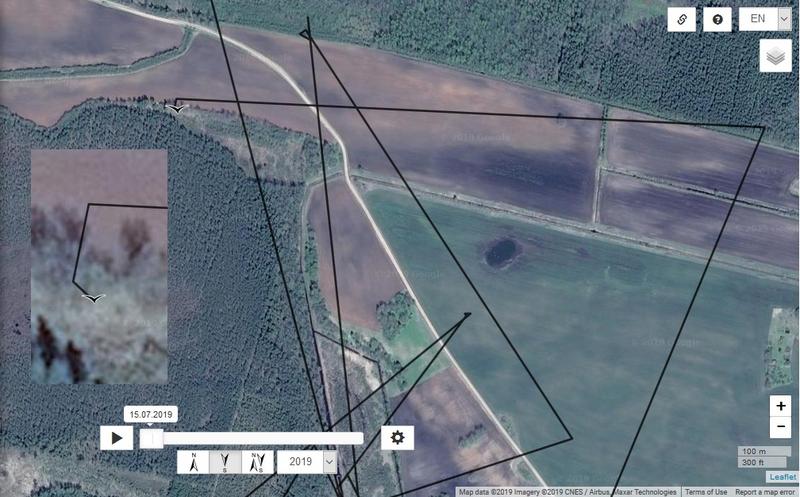 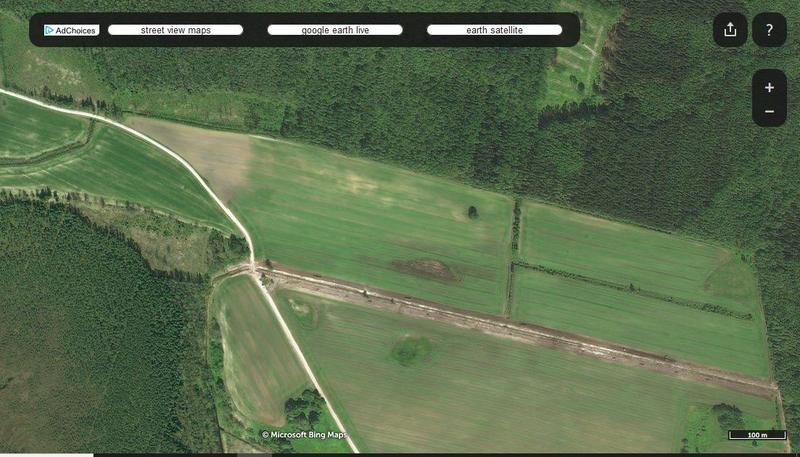 Mare stayed in her "summer apartment" 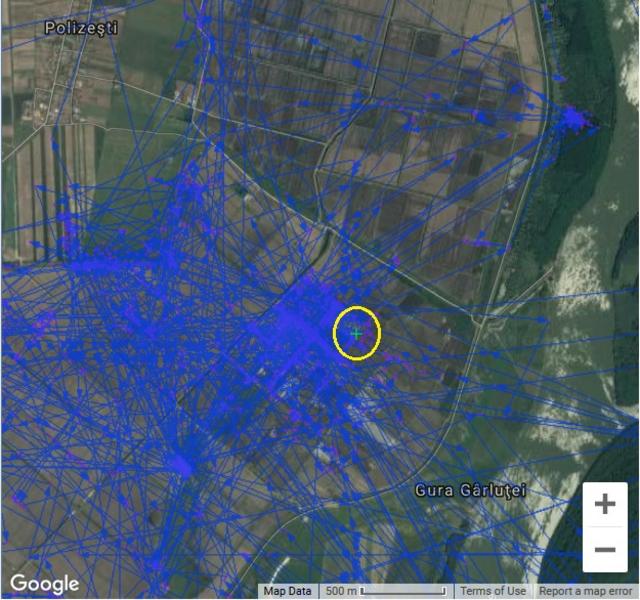 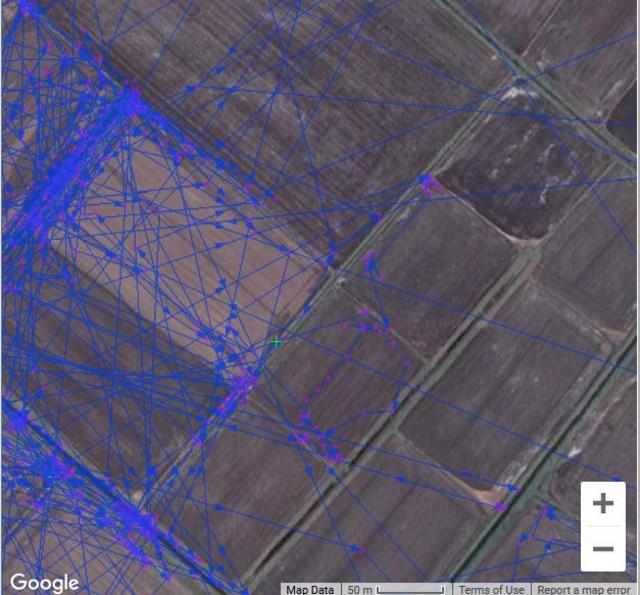