with such a difficult topic, it is a bit early to struggle wit GT on a sunday morning.
That's why I very briefly summarize my thoughts to this topic.
the perversion is to reject all four-legged predators that regulate the game population.
On the contrary, a great deal is being done to artificially keep the desired stock high.
Accepted that the stock can not be healthy and damages caused by those animals, arise due to the high number.
The result is:
Hunting supporter: "In nature is no regulation due of the lack of predators. We are needed, it is necessary to hunt, and so on"

edit
wolves, lynxes are hunters - many two legged who shoot in the woods are poachers.
Top

Biker, this is a difficult topic at any time.

many traditional hunting methods developed in the times when even human life was not respected much. how could people value animal lives much higher when for example pickpockets were hanged? it was the same with domesticated animals. they were not always treated well, not any better than slaves. even nowadays human rights are not always respected. how could then animal rights be?

we can only hope that all animals will be treated better, both farmed animals and game. unnecessary killing should be stopped. if it is necessary to kill an animal it should be done with as little pain and anguish as possible.
Top

this post was originally posted in the Latvian WTE topic. it is off-topic there and we in the Admin/Mod team thought that it is better suited in this topic although it is not quite about hunting either.
(down-sizing the font will not make an off-topic post more suitable to a topic.)
the wolf question, on the other hand, has a lot to do with hunting.
Ajeta quoted posts by Liz.

Liz01 wrote: ↑September 3rd, 2020, 6:37 am September 3
Florinda, the wolf eats calves, if at all. Cows are too big. It is human responsibility to ensure flock protection of their cows, sheep or .... Dogs kill more goats, sheep, and other smaller farm animals than wolves. Nobody cares about dogs that kill people and animals.

Ajeta wrote: ↑September 6th, 2020, 8:46 am size=85 ]No, the wolf even chases, attacks and successfully kills horses (and not just ponies). Exactly such a case was reported in Germany only this year, in the region of Lower Saxony, where people, too, assumed that herds of big horses were safe. It was supposed to be the work of a wolves family whose leading male has long since been known to attack even cattle, and seems now to have passed that knowledge on to his kids. It was decided to kill that male at some point but the chase was obstructed and not successful. In Spain cases of chained dogs (Alsatian) being killed and eaten by wolves have been reported, too. Again in northern Germany, one of those big, strong dogs specially used for herd protection was left near dead about a year ago by a wolf (female, I think) while trying to defend its herd. Even hunting dogs are attacked and killed by wolves, there was a law court in Germany against a hunter trying to shoot the wolf that was attacking his dog.
Once wolves have learned that herded animals are more easily found and chased, they will use that knowledge. Just like it has been shown that there exist groups of lions spezializing in elephants or giraffes. Where wolves can chose between sheep and big horses, they will probably go for the sheep. But when the choice is between wild boar and horse, the latter might seem by far the more attractive.[/size]

Liz01 wrote: ↑September 3rd, 2020, 6:37 am It is human responsibility to ensure flock protection of their cows, sheep or .... Dogs kill more goats, sheep, and other smaller farm animals than wolves. Nobody cares about dogs that kill people and animals.

Ajeta wrote: ↑September 6th, 2020, 8:46 am size=85 ]Against an experienced group of wolves there's little help realistically speaking; not even herd dogs always manage to keep them at bay. And wolves have been reported to surpass even those high and very sophisticated fences of zoos which are supposed to keep the wolves in and are of much bigger dimensions then anything any sheep owner could put up every night around his herd. In the long run and without wolf management, keeping animals free range will become too risky.
As for dogs, I know of uncounted cases of them being put down after biting a human. That irresponsible people let their dogs go after live stock (and other animals) is indeed a problem. But at least as far as my research goes, the wolf is considered doing a lot more as well as more serious damage to live stock being held free range and even those held in open stables. Scandinavian countries, with a long experience with wolves take account of that by a sensible wolf management which keeps the population at a level where it can bread healthily but poses a low risk to live stock.[/size]

Thanks ame, I will not comment on the subject. I have a different opinion on this and also different information.
Top

something came to my mind about wolves and other predators. people in different countries may have quite different attitudes towards them. the attitudes of Finns and Estonians about wolves are quite different. in Finland most people think that wolves are extremely dangerous for people and sheep and cows and dogs and to all other animals. they build very expensive 2 m-high electrified fences for farm animals to protect them against wolves.
https://images.app.goo.gl/mMramvhPcDo1GF5a7
in the countryside children are taken to school by taxis if someone has spotted some wolf track or poop within 50 km radius. they think that the wolves should be eliminated and people shoot wolves illegally.

in Estonia the attitude is quite different. the wolf is their national mammal. they have about as many wolves as there are in Finland in an area which is 1/7 of that of Finland. our Eagle-Urmas farms sheep. i once asked him if he has problems with wolves. he said no. i have seen his sheep field. he has an electric fence around the field. the fence consists of two thin wires. the top wire is about 70 cm high so that even i can step over it (tiptoeing and being very careful; i have once felt the shock and it is not comfortable.). the lower wire is about 30 cm from the ground. Urmas said that the main purpose of the fence is to keep the sheep inside. the wolves stay away by themselves. (our neighbours at the summerhouse keep Hereford cattle and they have similar fences with two wires. the wires are higher from the ground than in the fences that Urmas has but the Herefords are slightly bigger than sheep.

Urmas has bigger problems with ravens. they land on the sheep's back and start to peck the back and sides of the sheep till they get to the flesh. sometimes the raven manages to topple over the sheep so that she falls on her back and is unable to get back on her feet. then the raven goes on pecking the sheep, eating the sheep alive. if this goes on long enough the sheep will die. Urmas has to check his sheep herds every day to see that they are ok.
Urmas took a picture of such a victim on the next day after he had rescued the sheep. the wound on the rump of the sheep has already slough on it. when it was fresh the wound was twice as large and screaming red with bleeding. here the wool partly covers the wound. 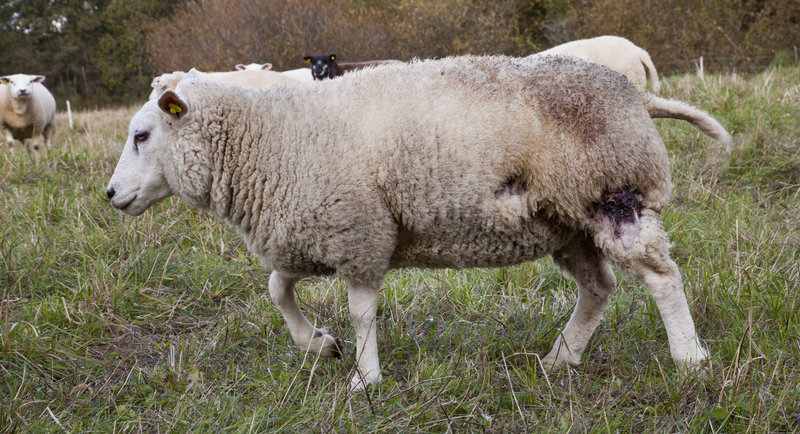 The discussion about the wolf is really hard to tame.
Also here in Germany. Very emotional, but I think, also often politically abused.
Urma's example shows that life ... living with the wolf does not always show torn animals.
We only have a few animals in northern Germany. Rarely packs. Nevertheless, this is where the wolf is hounded the most. Every animal that is cracked is displayed and published in newspapers. Even without proof that a wolf is the culprit. Hatred is stoked and parties make it their own topic to present imaginary protection. I often experience incompetent dog owners and their dogs are often more aggressive than a wolf. And there really are more predators than just one hungry wolf. Think of the many slaughterhouses in which animals are slaughtered without morality and without knowledge of an agonized killing. To be destroyed in the end in the disposal container. Guilt is our actions. But wolves as scapegoats are discussed ???
No wolf leaves as many tortured animals behind as we humans. Every day!!!!

My personal opinion is that I have respect. But that I'm also insecure. Which stories can I trust? The tabloid is full of stories. Can I safely walk in the forest with my Dachshund in the forest? For example?

Yes. So far, everything is okay.
And I want every species to have a fair chance.

Appendix: In our neighboring country Denmark, the discussions are very quiet (relatively). I have a feeling that some political opponents of wolves and their supporters set the tone. It is our vacation destination and it likes to present itself with its nature and its animals. Nevertheless, whole packs and puppies are shot there with contempt and hate. Disappointing.
"Let nature be your teacher."
(William Wordsworth)
Top

Tomorrow there will be a vote in Switzerland!
I hope people vote * correctly *.
https://www.wwf.ch/de/medien/nein-zum-m ... ewEALw_wcB
Top
Post Reply
167 posts