Why don't I see any new data on the card? 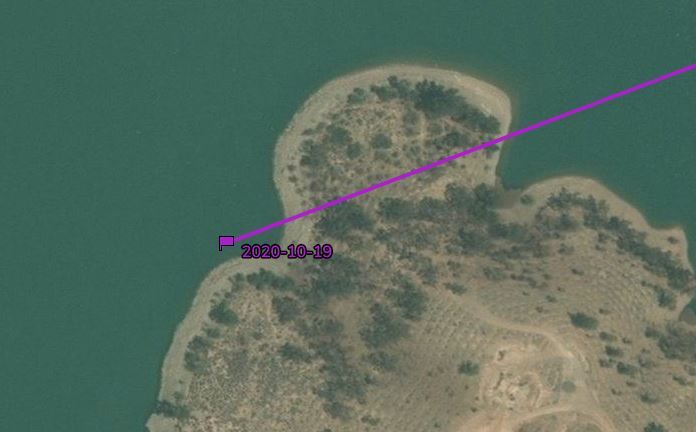 TENSIFT RIVER: Its water discharge changes according to rainfall; it is one of the ten major rivers of Morocco, but frequently can be waded through even close to its outlet. (wiki eng) The Oued Tensift is an important river in southwest Morocco with a maximum length (including the source rivers) of about 250 km in spring or only 100 km in Summer and autumn. The length of the Oued Tensift varies depending on the season and the winter rainfall. (wiki - german)
Tensift region is region in the semi-arid South. 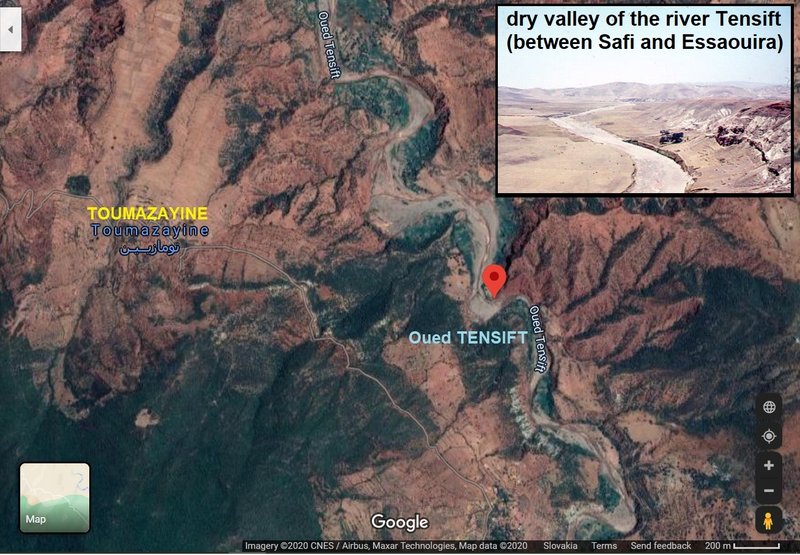 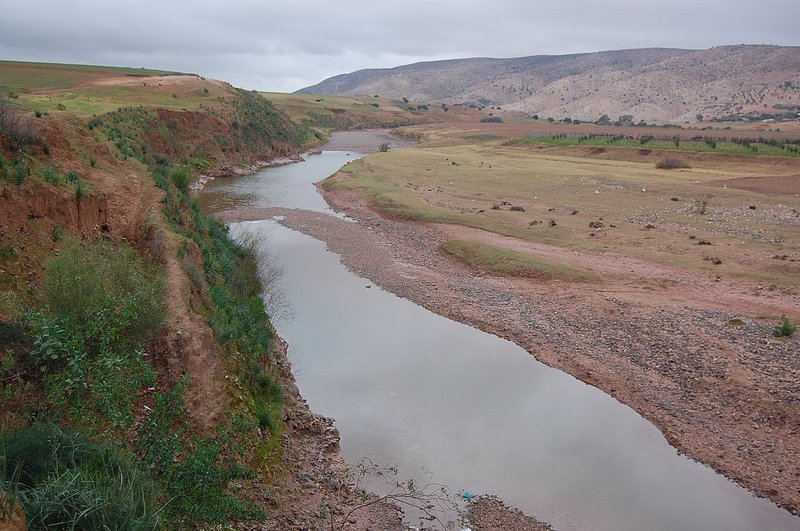 Mr. Šejna puts the new location on the public map (data: morning 5h) only day after
(I have this season access to non public map)
Top 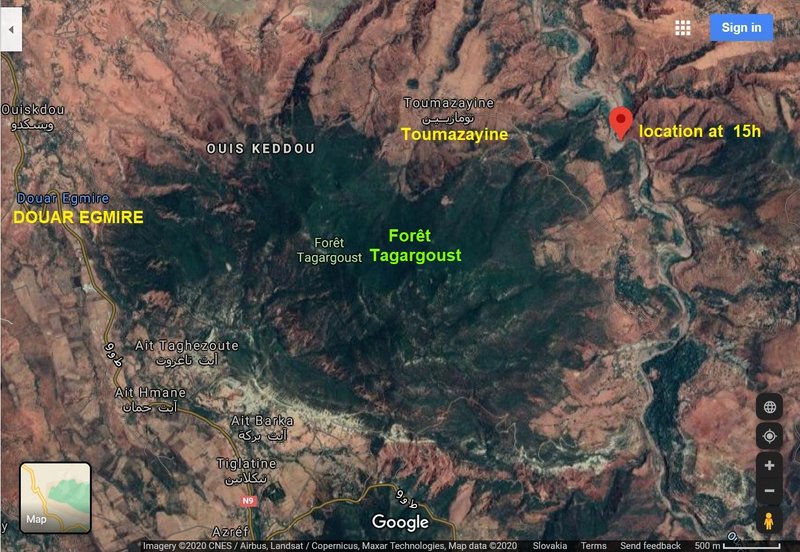 near Douar Egmire between Marakesh and the Atlas mountains 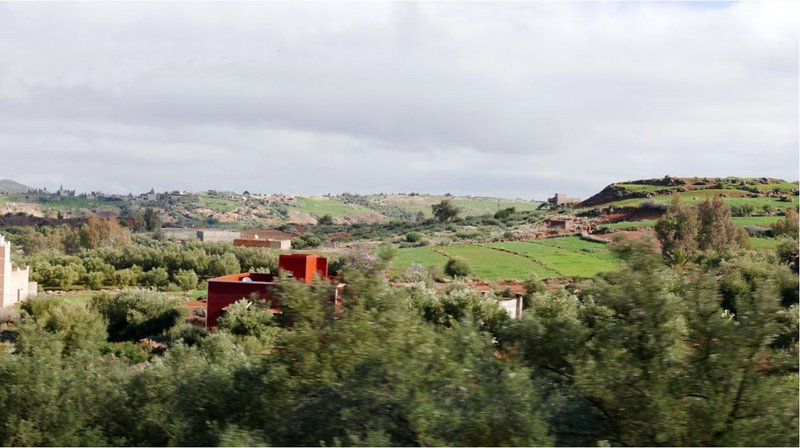 
Looking out from the N9 at aproxx Douar Egmire
The N9 is the main highway crossing the High Atlas between Marrakech and Ouarzazate, topping out about halfway at the 2260-m Tizi n'Tichka pass - a gateway to the Sahara Desert 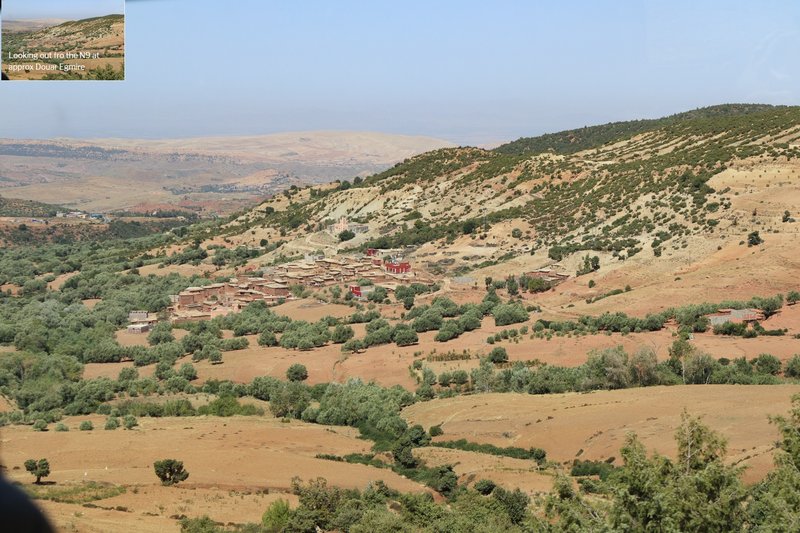 PL - 5771 Sieraków - hatched in 2020
TURKEY - stork remains in a populated area along the Beyşehir canal, not far from Lake Beyşehir
- https://en.wikipedia.org/wiki/Lake_Bey%C5%9Fehir (Seydişehir/Konya). 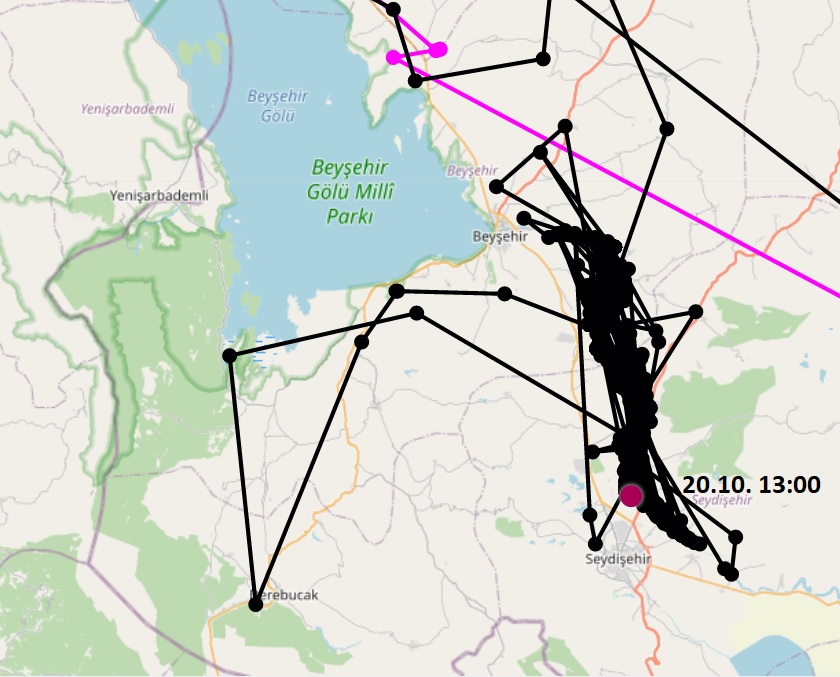 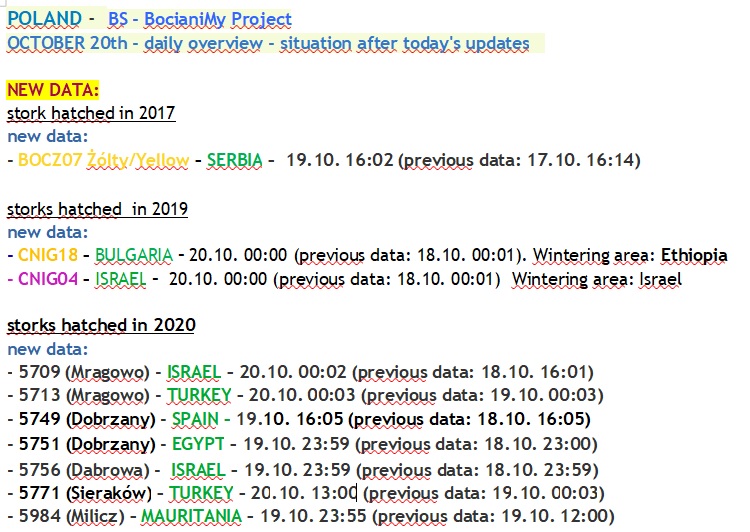 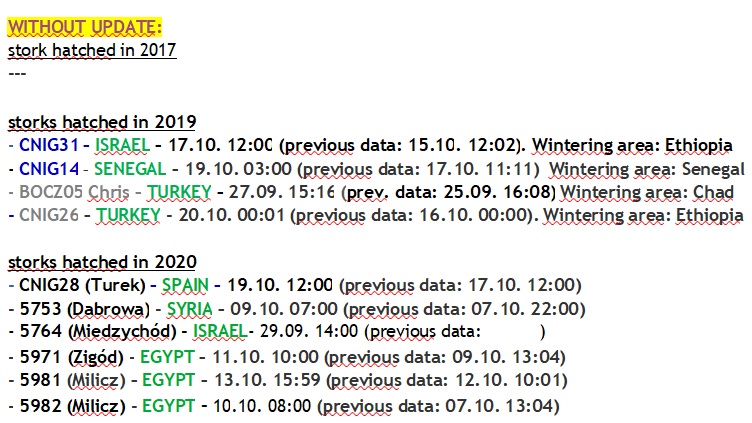 Still no news about the other Egyptian

Hana, thanx for all news

You're welcome, Solo.
I think our "Egyptians" will appear somewhere in Chad. We have to be patient.
The other two apparently had no luck in their life

I think it will stay in this place for a while 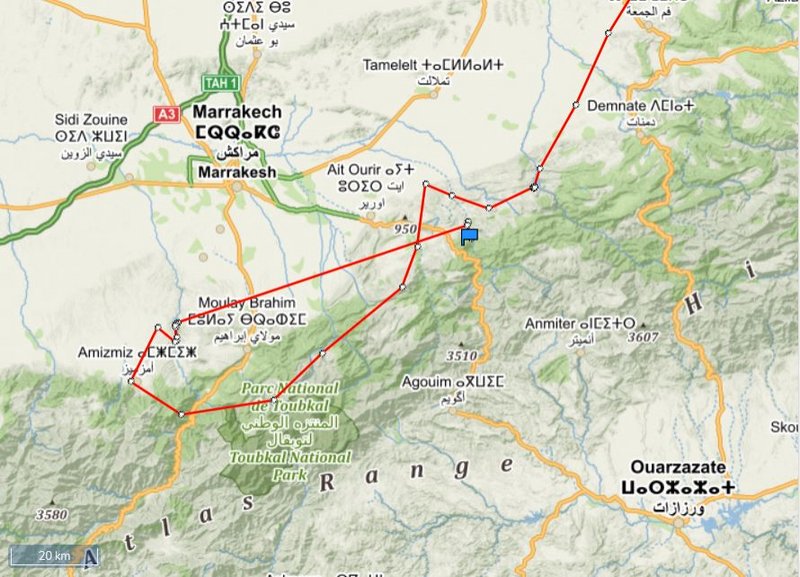 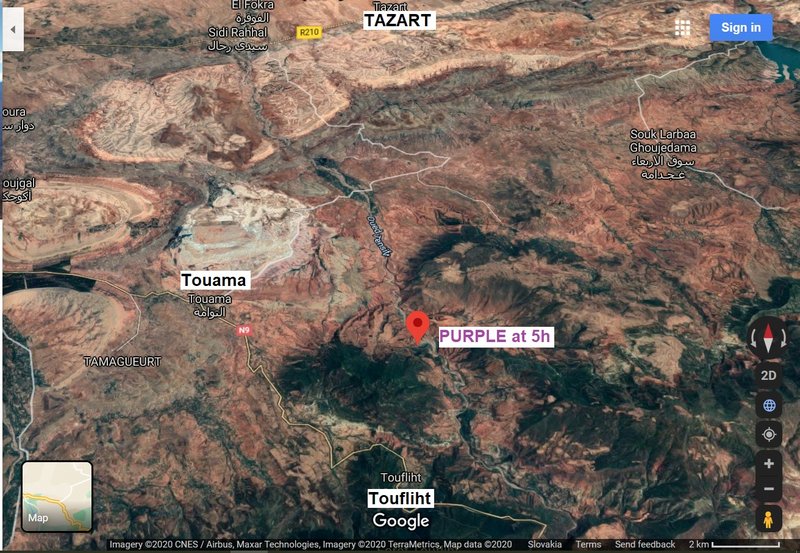 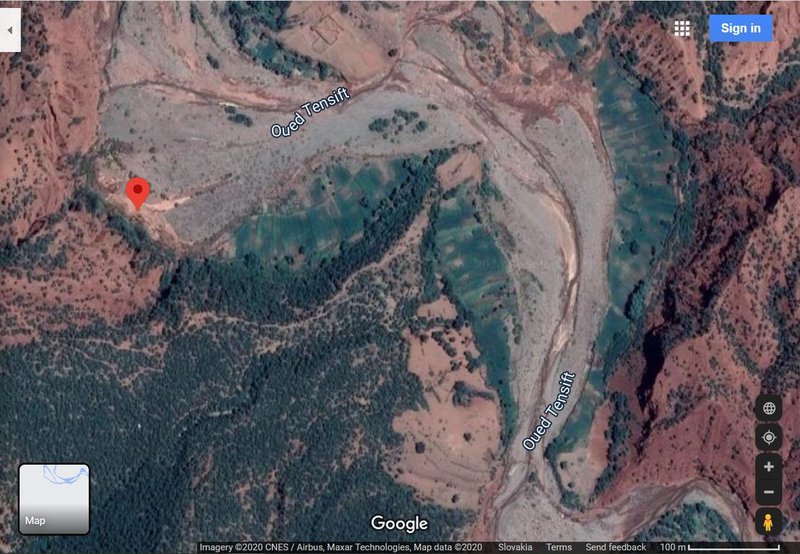 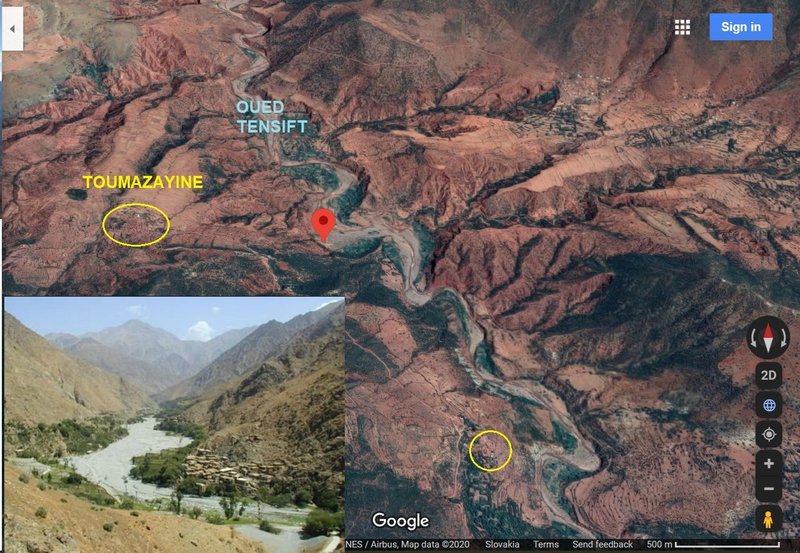 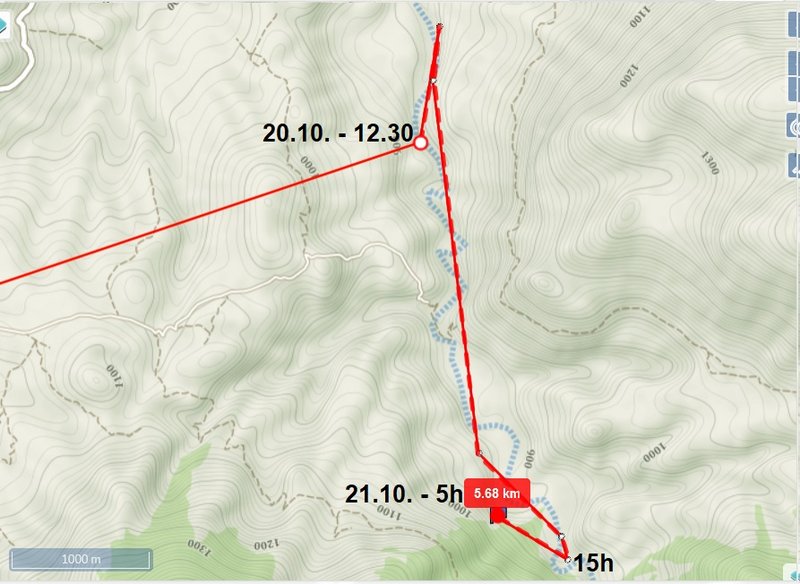 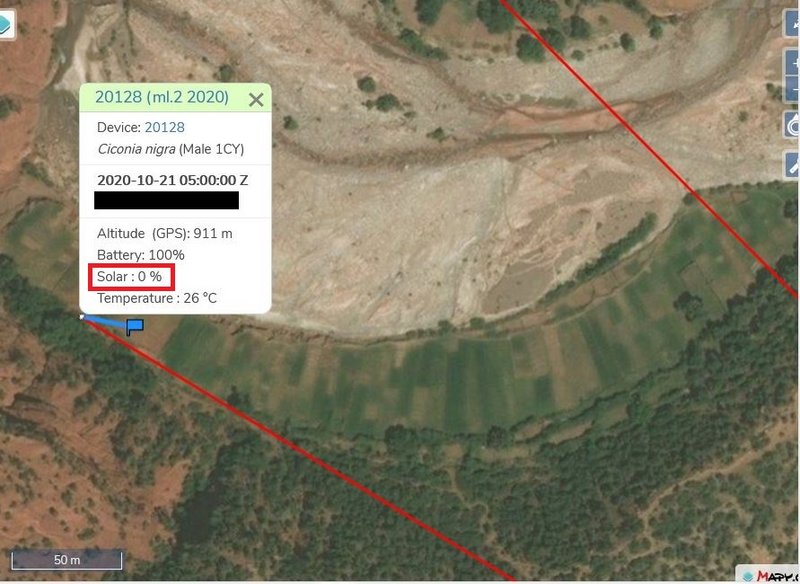 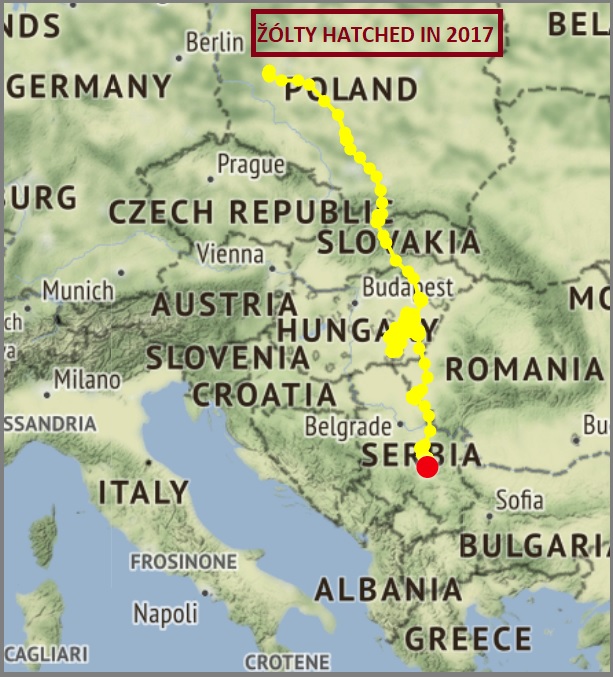 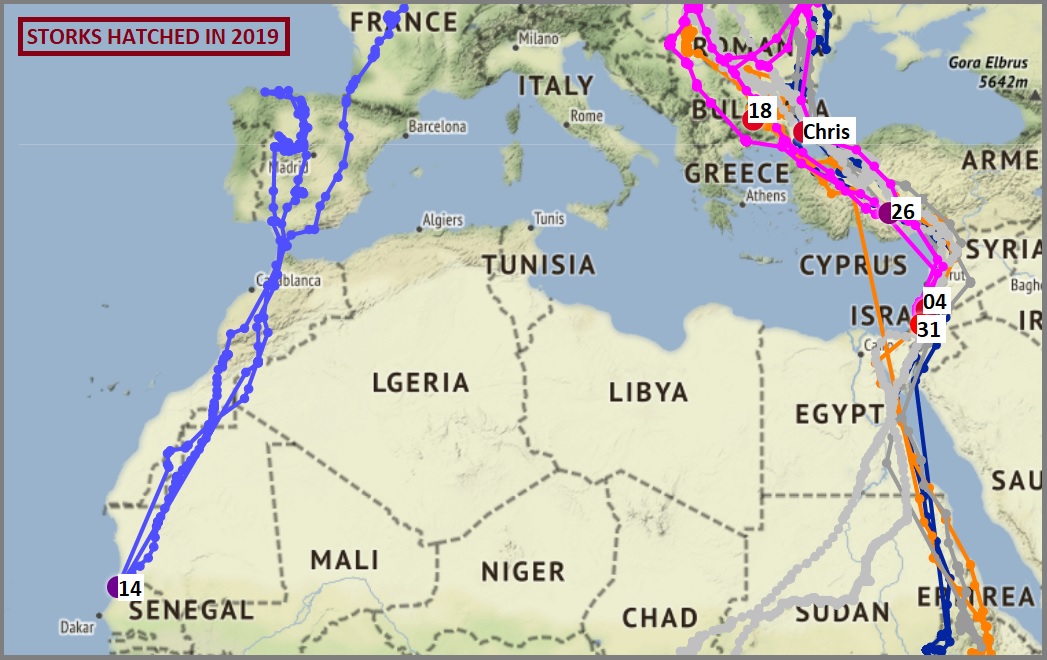 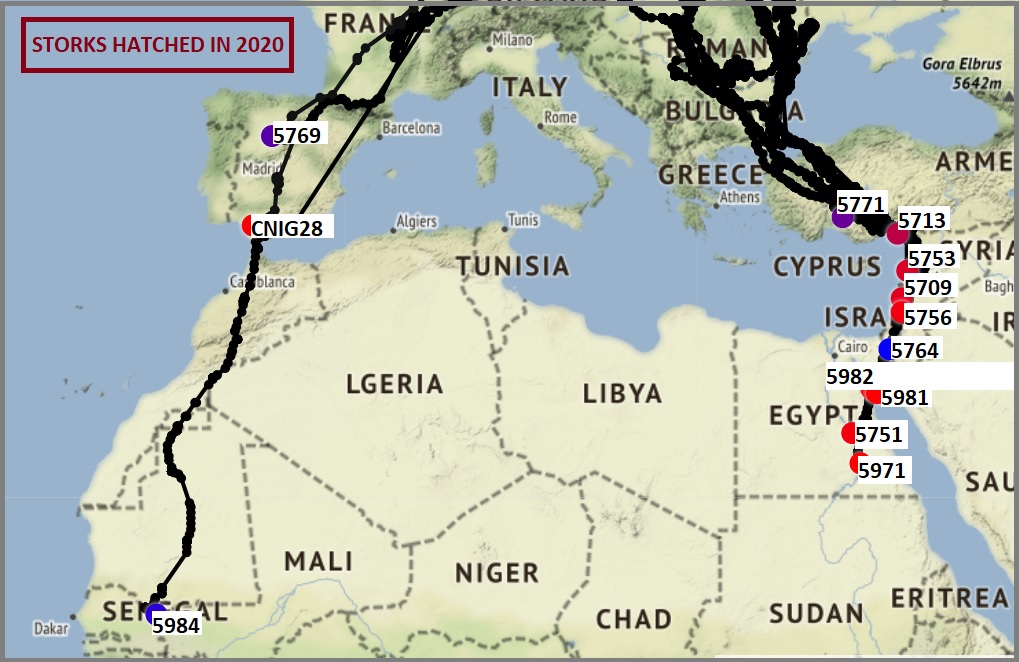 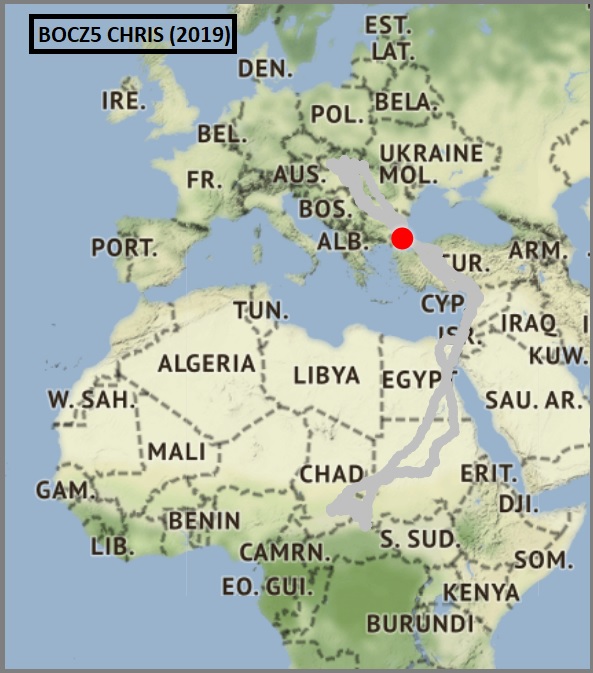 Chris - the photo is from the day he received the transmitter 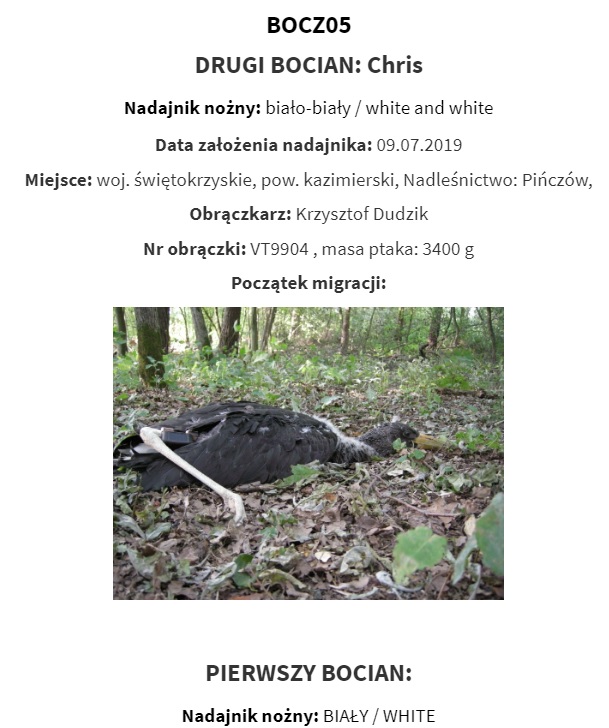 Chris flew from Poland in 2019 via the eastern migration route through Romania, Bulgaria, Turkey, Lebanon, Israel, Egypt and Sudan to Chad (which he reached on October 8, 2019). Since January 21, 2020, he has spent the second part of migration in the Central African Republic. On April 6, 2020, he set out on his return journey.
He flew all the way to Slovakia, but spent most of the summer in Hungary by the Bodrog and Tisza rivers and then on the Romanian-Bulgarian border by the Danube river.

On September 27, 2020, he left the Danube River and began a rapid shift south. In northern Turkey, his journey stopped on the afternoon of September 27. The last location is in the field. He has not reported since (his last position on the map is shifted back, possibly due to a search).

In agreement with the Polish side, I asked for help from Mr. Fikret Can, who lives in Istanbul. He is a volunteer who dedicated his life to storks, who has been observing and rescuing storks for many years. (Last November, he found the remains of a Polish black stork from the "Ptaki silesiana" project, which perished on a power line).

Mr. Can and his Turkish friends searched for Chris for several hours (according to the sent coordinates) in the field, but also in the vicinity. The field was not plowed, but unfortunately they have not yet been able to find any trace of Chris.

There are several ways Chris could have disappeared:
- if Chris became a victim of a predator, some remains would be found on the spot - feathers, a transmitter ....
- however, if he fell victim to the hunter, the body could be taken away and the transmitter destroyed
- the third option would be the best - a sudden transmitter crash and Chris flies on. In this case, we have no choice but to expect him to either report himself again, or someone be able to deduct his circle in the event of his return to Europe.

By following Chris's path and his daily movements, he grew very close to my heart. It's very sad. He was in the second year of his life, maybe in a year or two he would return home and bring out his own chicks.

But the spark of hope still remains ....

Many thanks to Mr. Fikret Can and his friends for their helpfulness, willingness and the very search for Chris.
Top

I like Chris, the NEW BIAŁY/White, very much (also because Woodek = BOCZ05 – BIAŁY/White, stork from the streamed nest Łódź - Dab).
I am very sad, but in this case I still hope

when Woodek perished: "... the logger will be established for another young stork from this year's brood and it will be possible to follow the journey of NEW WHITE. May he have the same or even more luck as his predecessor ..." 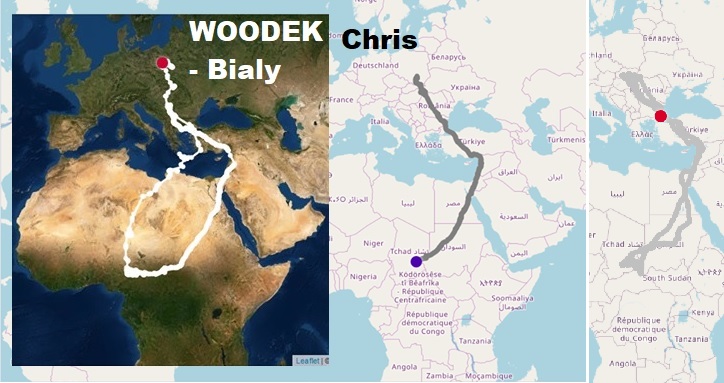 LV - MARE
still they aren't new data on the goris.lv map - another two day without update 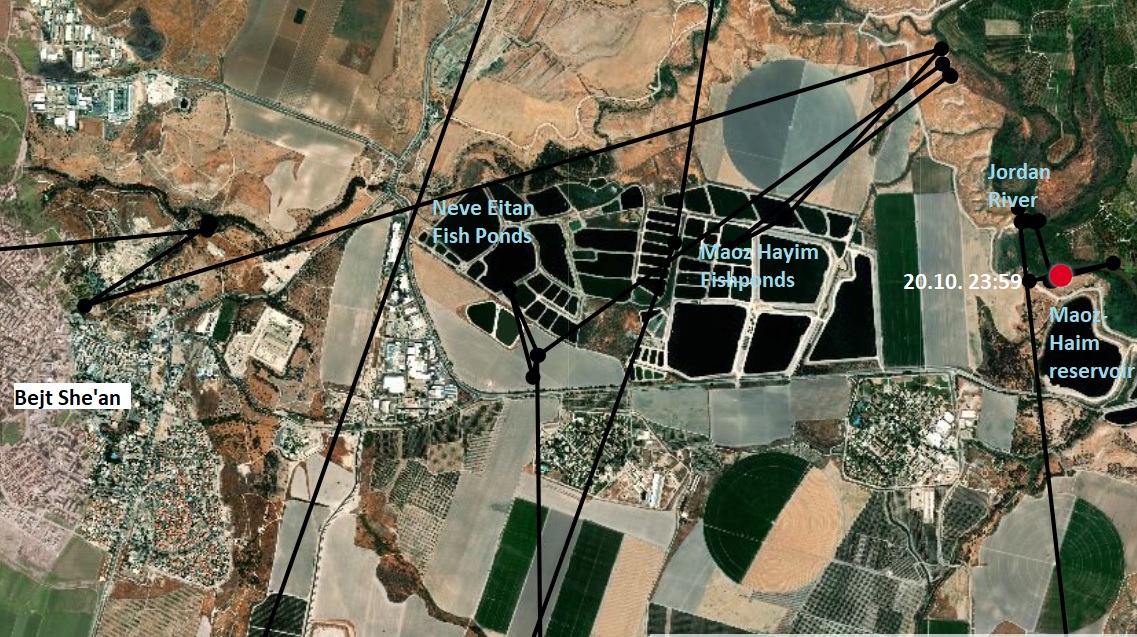 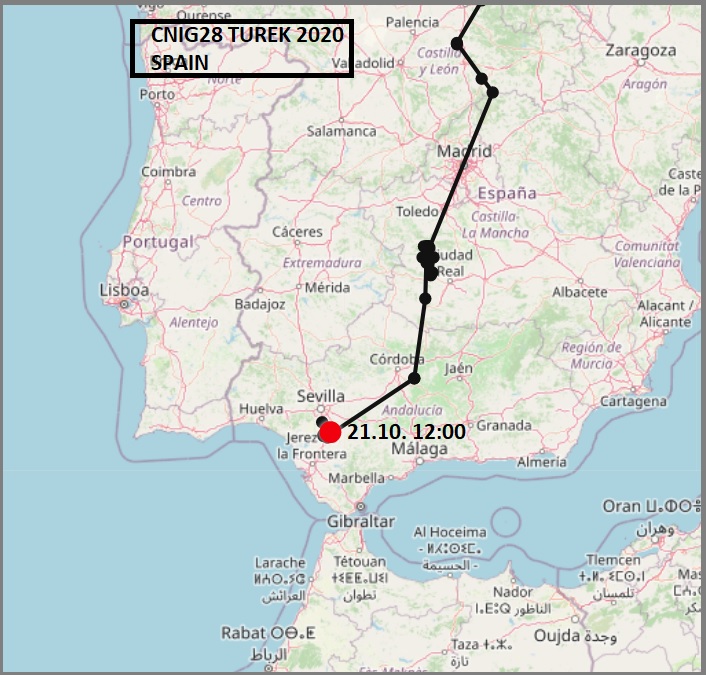 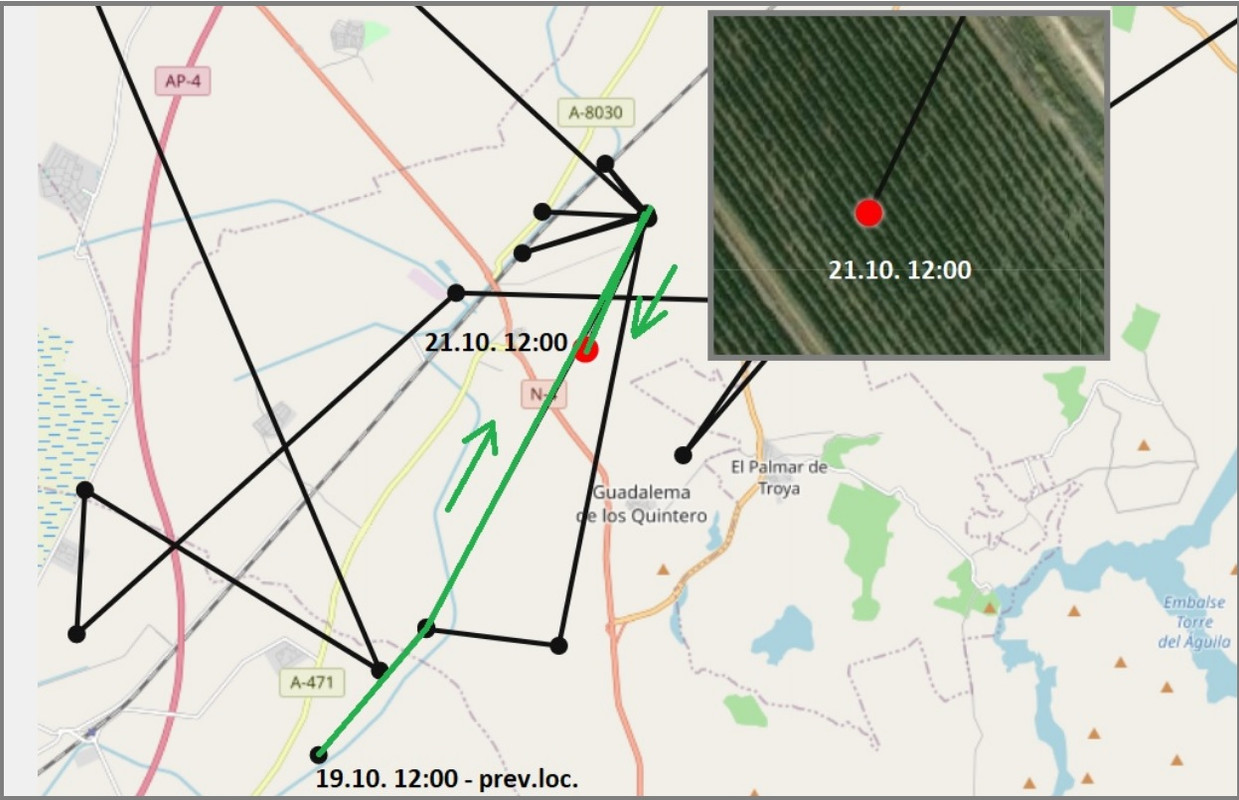 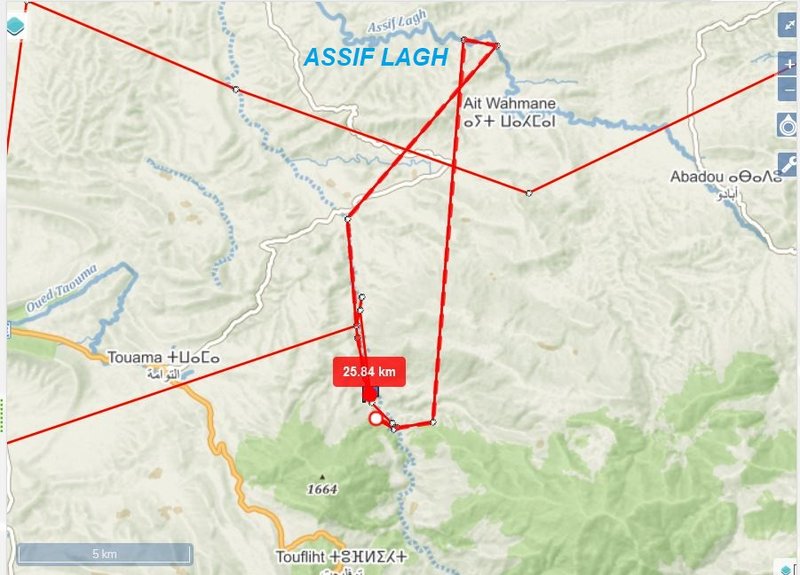 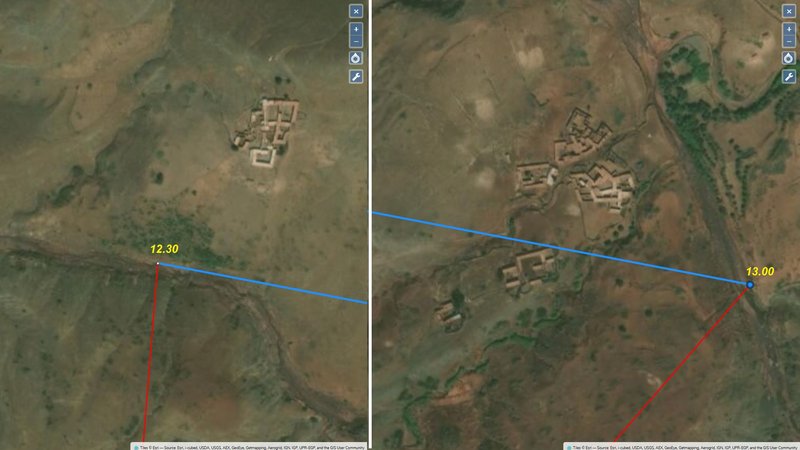