Mare after feeding (searching for food) on the irrigated fields flew back to to the insula - Braila's Small Island (Insula Mică a Brăilei) on the Danube in Brăila County, Romania 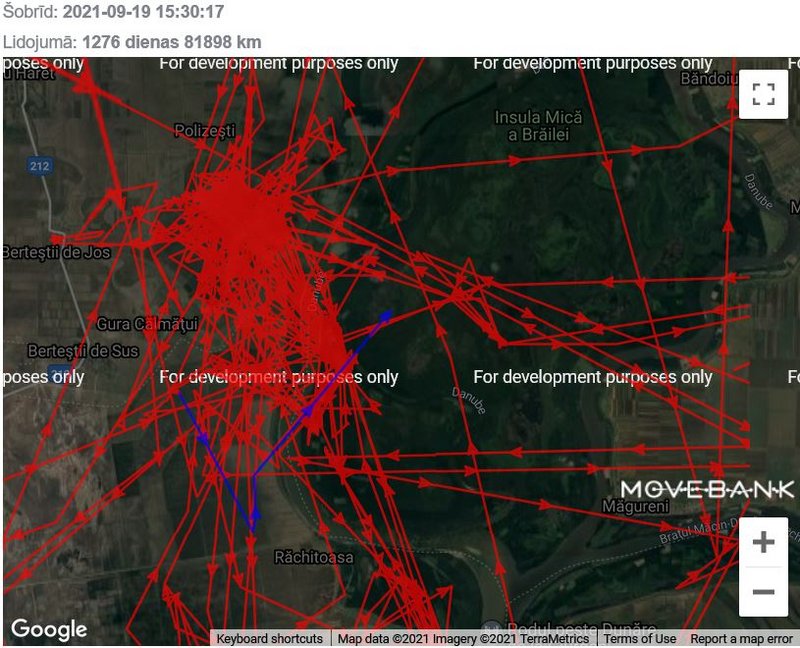 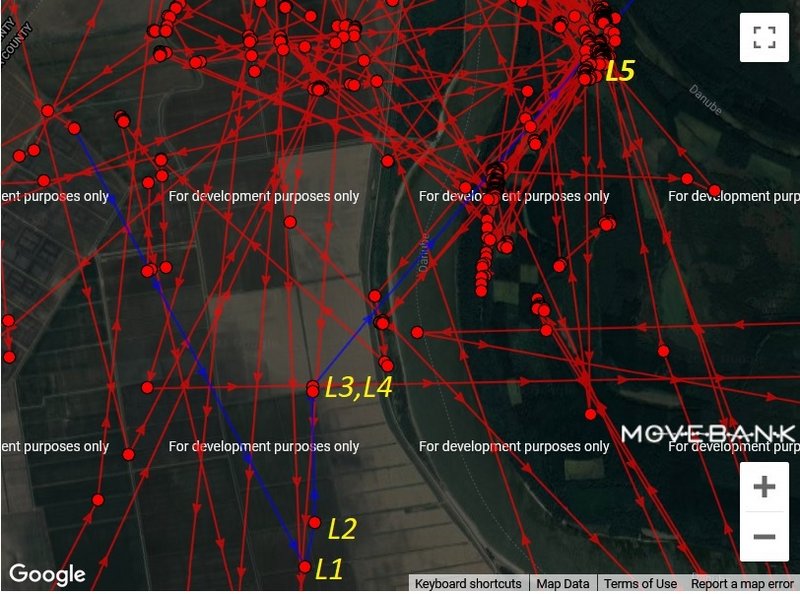 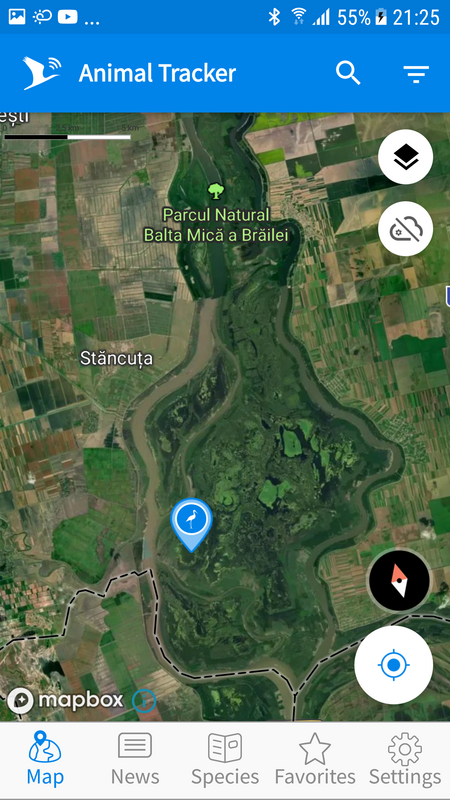 Mare from the insula - Braila's Small Island (Insula Mică a Brăilei) on the Danube in Brăila County, Romania to the irrigated fields near Răchitoasa 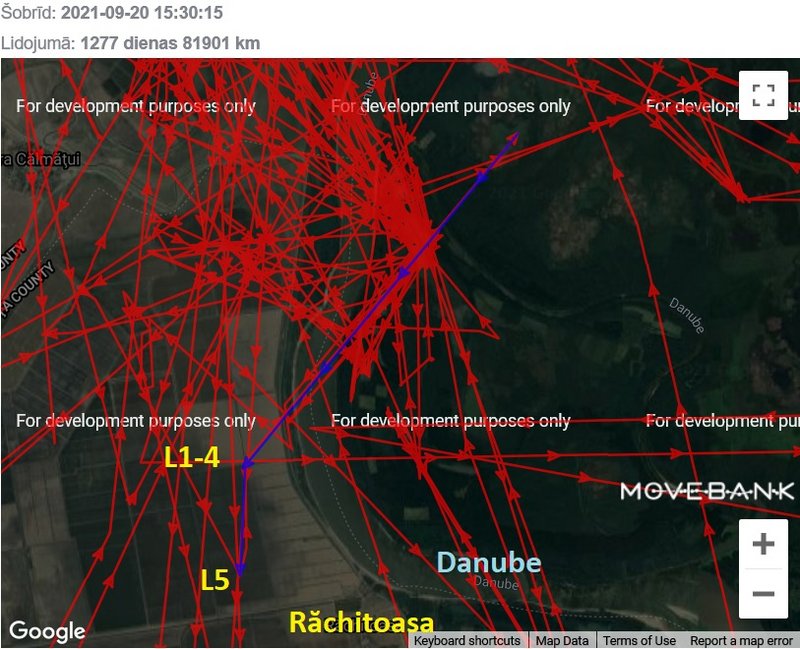 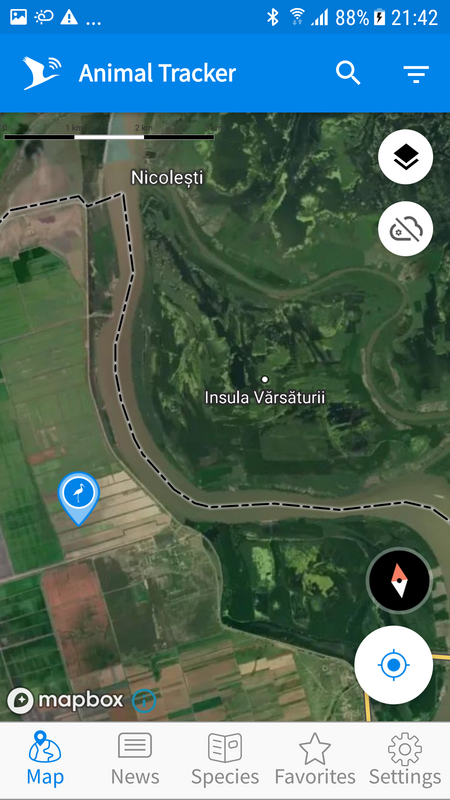 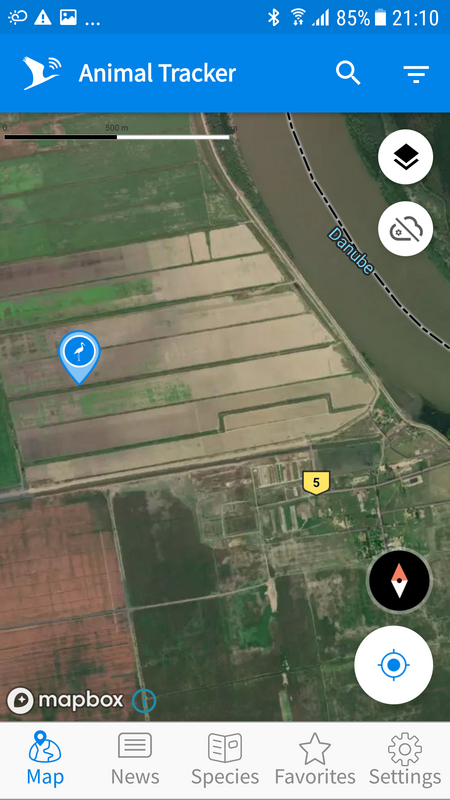 new black stork on the birdmap Katrin from Latvia

"A juvenile Black Stork hatched in Latvia (wearing a ring with the Latvian code 0XUC, ringed by Maris Strazds in northwestern Latvia on July 4 as one of four chicks), which migrated 200 km north to the settlement of Kiili after leaving the nest and stayed there to stop at a household. Although the host caught the fish and put them in the garden pond, it was not enough food for the young Black Stork. Thus, he was captured by the people of the Estonian Wildlife Society and the Environmental Board delivered caught stork to Tartu, to the animal clinic of the University of Life Sciences under the care of Dr vet Madis Leivits. The young bird was clearly underweight on arrival, 2.5 kg. At the animal clinic, he had to be fed for 11 days until his weight reached normal. He weighed 2.96 kg before being released. Based on the outlook, pictures and measurements, she is probably a female. Maris Strazds asked to be named the stork as Katrin.
We released Katrin in southwestern Estonia near Häädemeeste on September 15. Katrin immediately took off, flew south and disappeared beyond sight. On the first day, however, not far away, because the compass needed calibration so as not to repeat the former mistake of choosing a direction. However, Katrin has flown south and arrived in Poland on September 19."

21.09.2021, Distance: 565 km
- Naddawki - a village in the administrative district of Gmina Augustów, within Augustów County, Podlaskie Voivodeship, in north-eastern POLAND 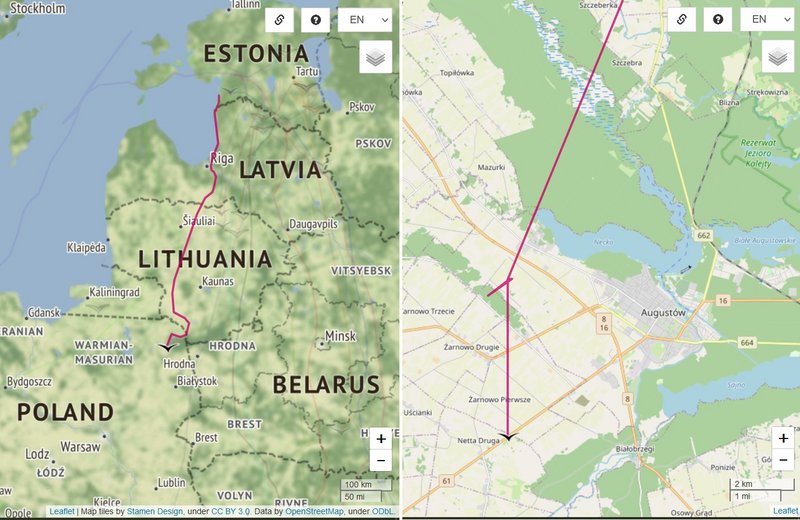 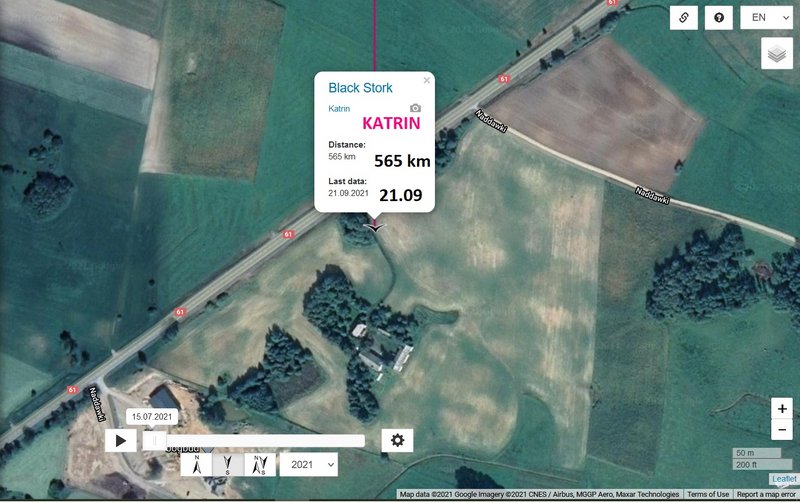 and here by Heloise

Mare from the insula - Braila's Small Island (Insula Mică a Brăilei) on the Danube in Brăila County, Romania to the irrigated fields near Răchitoasa 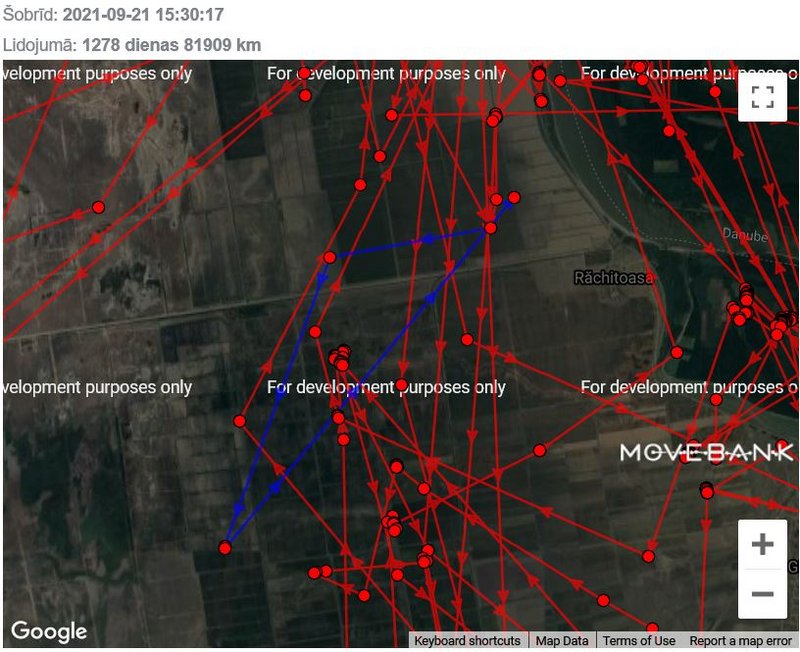 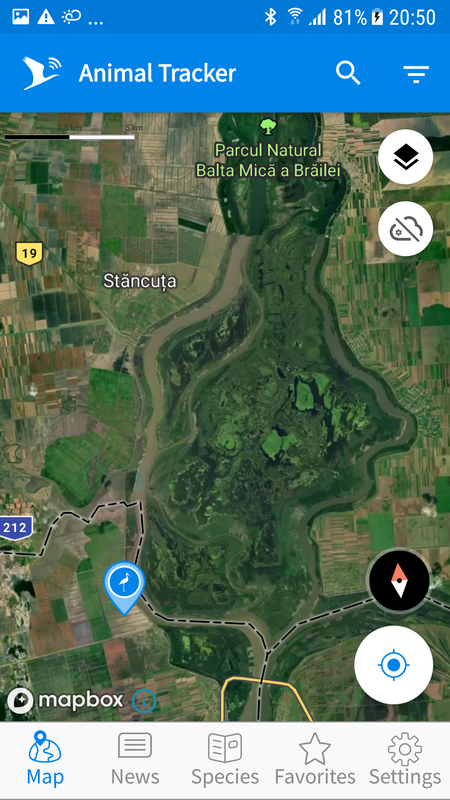 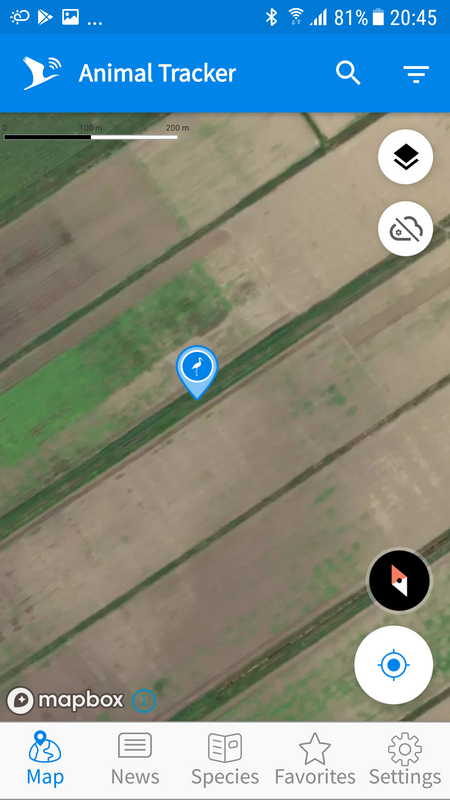 Hello!
Thank you Solo!
It is very interesting to know!
Katrin

Beautiful name.
I wish her (so nice she's female!) a safe flight and a happy life! 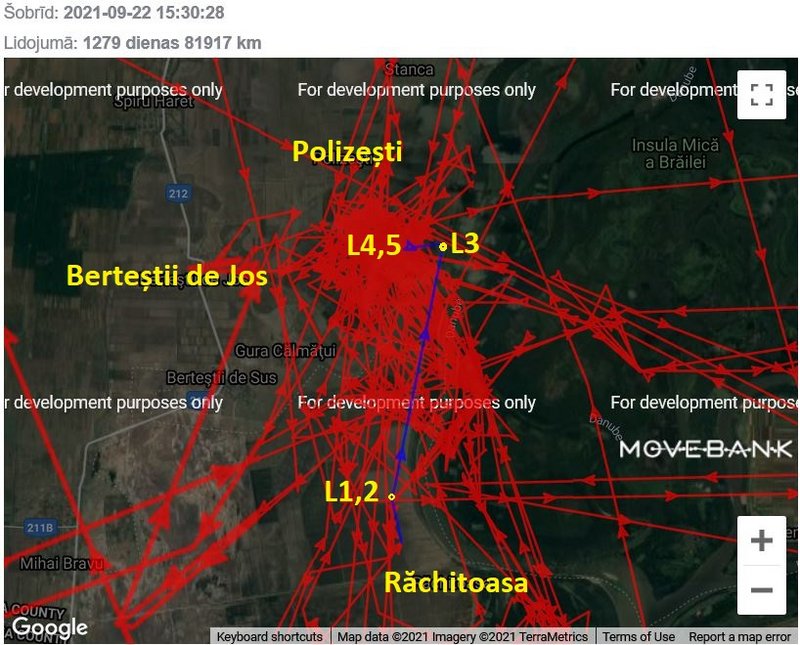 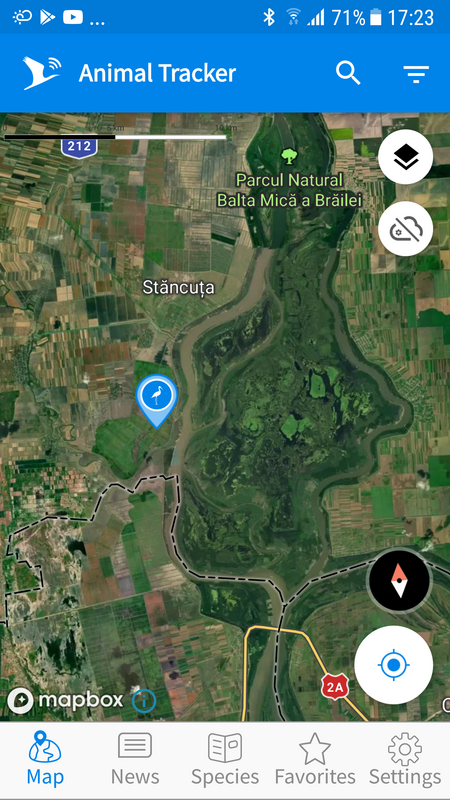 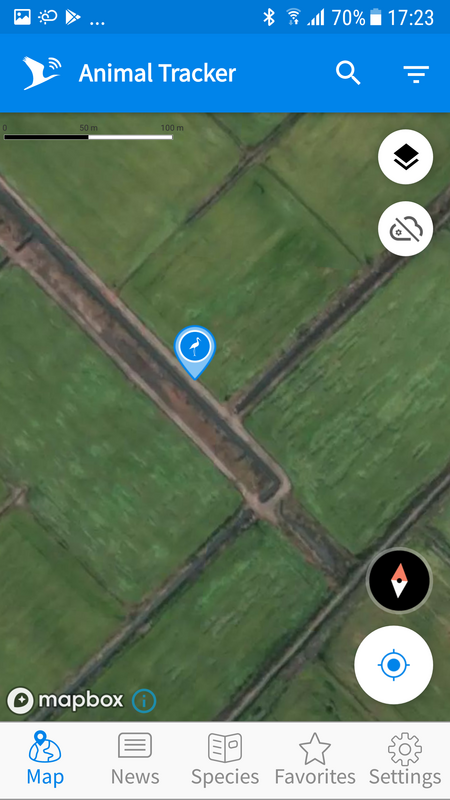 Thank You, SOLO, for the notice 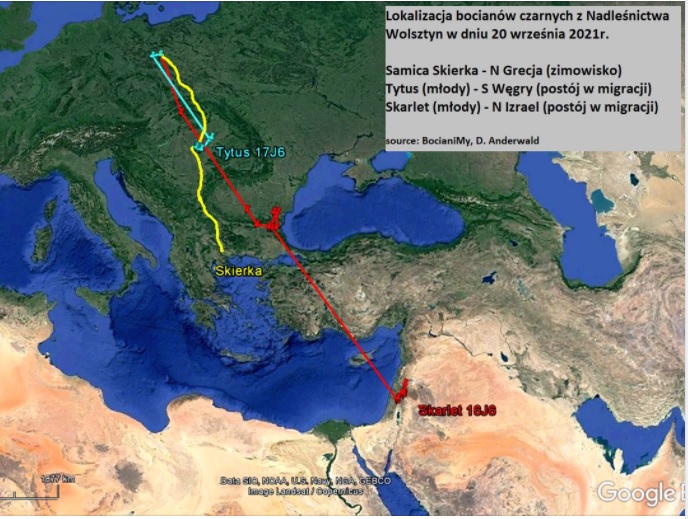 GT: "Where are the storks from the Wolsztyn Forest District?
Time for a short summary after a month of migration of the heroes of the online broadcast from the Wolsztyn Forest District.
The female Skierka left her offspring on August 18 and on September 11 she flew to the wintering grounds in Greece. Father Tytan disappeared (and stopped feeding) two days later, so the young storks took off on August 21. Młodziak Tytus is still stationed in Hungary in the Tisza valley, while Skarlet checked in today in N Israel. Thus, it can be seen that the whole family lives completely separate after one month of starting migration. Such a stork's fate ... but the most important thing is that so far all the birds are doing well"

I'm very happy, they are all right

It is a pity that their routes are no longer displayed on the map continuously...
Top

It is a pity that their routes are no longer displayed on the map continuously ...

yes, continuously follow their migration is more interesting - but better to have news only sometimes than nothing
I don't know of another case of the whole family of black storks with transmitter

Susanne, thank you very much

Frezja and Florek (the third chick Felek perished in Romania)
Frezja is on the irrigated fields within Galați and Brăila, east from Vădeni in Romania
Florek is still at home -near Biechów, a village in the administrative district of Gmina Pakosławice, within Nysa County, Opole Voivodeship, in south-western Poland 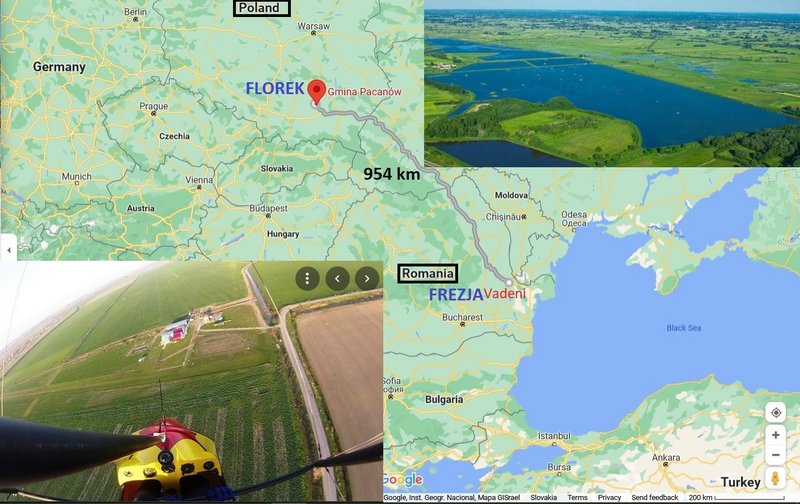 Thank you very much for the information .... I am very happy to * hear * something about Žólty .... for me she is still Žólty

I hope the two * little * find the right way and hopefully they will have a lot of luck!
Top

Florek was gathering forces around Buska-Zdroj for 24 days before a long trip south. Finally launched on 21th September. He flew

through the Vistula and immediately headed south-east. He flew out of Poland over the Beskid Low, later flying over eastern Slovakia, a scrap of Ukraine, Hungary and northern part of Romania. Flew through 4 borders

For a stork, it's a very long flight, although not a record-breaking one

. A record distance of 516 km was conquered by our stork with Nadleśnictwo Piotrków,Lasy Państwowe in 2020 He was flying from Moldova to Turkey then.

after such an exhaustive passing preyed yesterday (22.09) over Marusa (left tributary of Cisa). And the Freesia is still on the Danube. Both birds share the distance exactly

300 km! But there are still the Eastern Carpathians between them. The closest place where they can meet is the border of Europe and Asia - a narrow throat by the Marmara Sea and Bosphorus, where birds fly to Africa are concentrated.
And soon a surprise for all fans of our series from nest on oak - follow 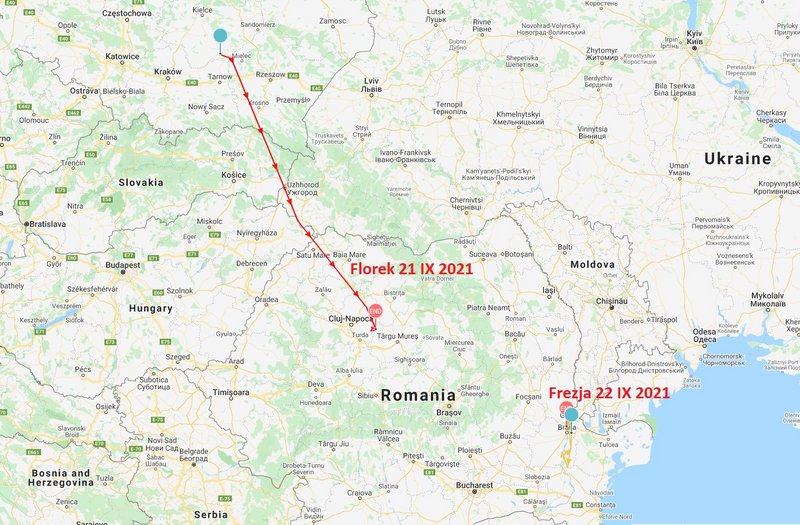 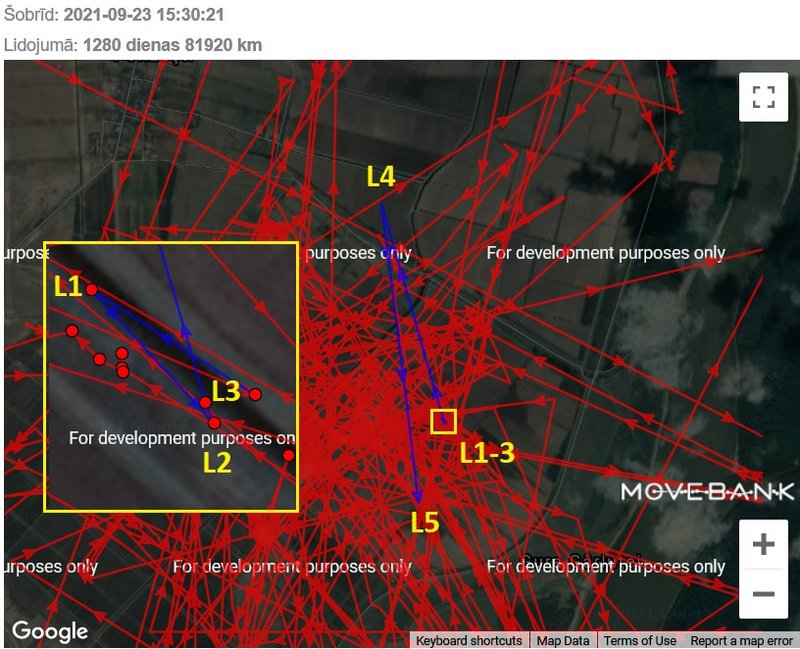 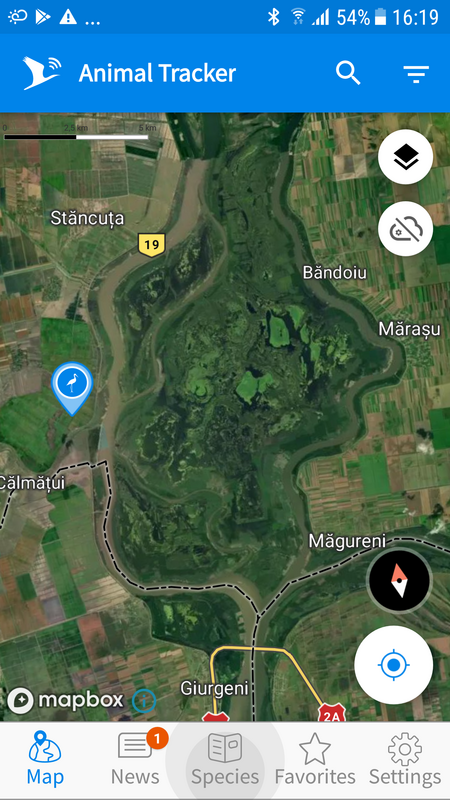 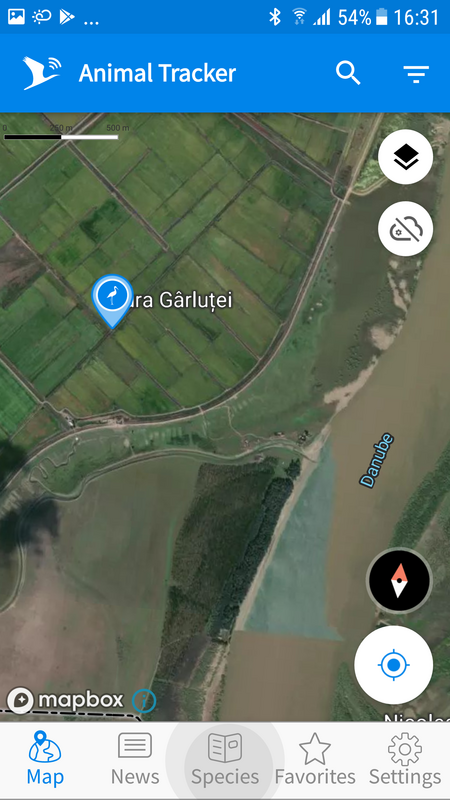 ... but better to have news only sometimes than nothing

Solo, I would very much like to hear only good news about them ....

I hope the two * little * find the right way and hopefully they will have a lot of luck!

Solo, I would very much like to hear only good news about them ....

it will be very good after all those losses to hear only good news
I convince myself that for some, silence is only a consequence of a transmitter failure

Mare stayed on her usually place from previous years - on the irrigated fields (to the west from the Braila's Small Island)
Gura Gârluței is now depopulated
today she flew not far to the NW, not far from Polizești - a village in Stăncuța commune, Brăila county, Muntenia, Romania 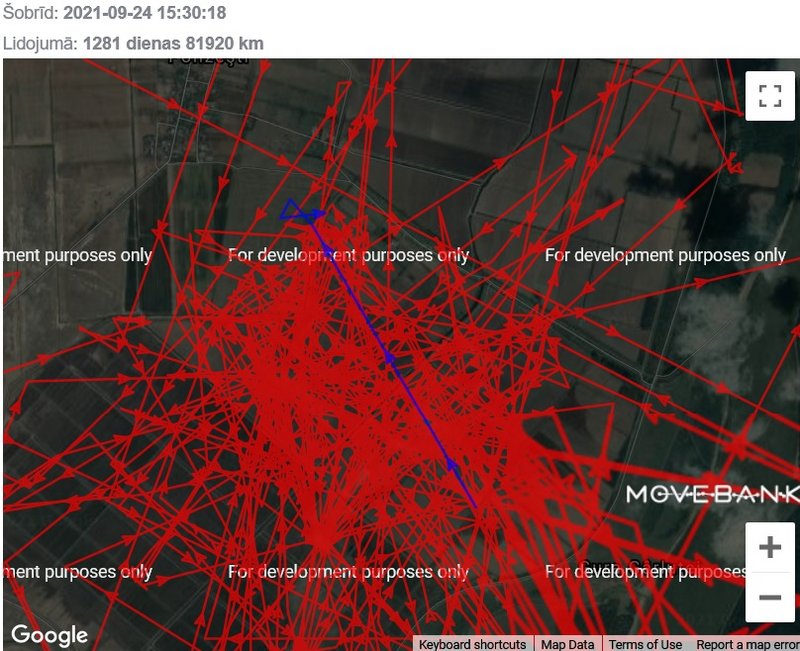 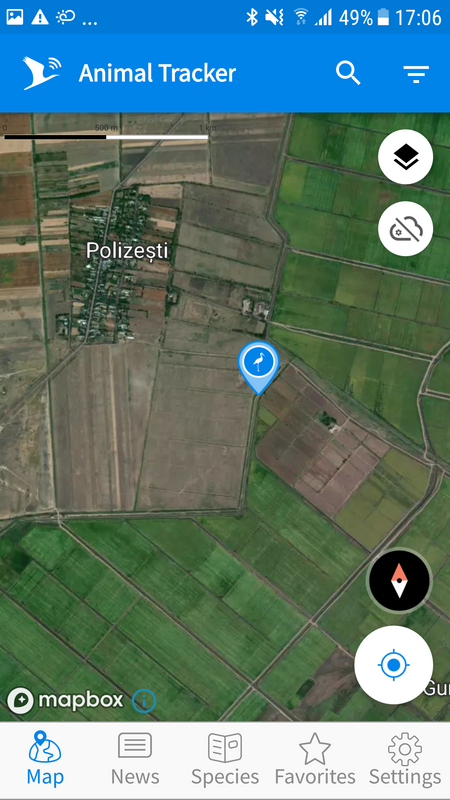 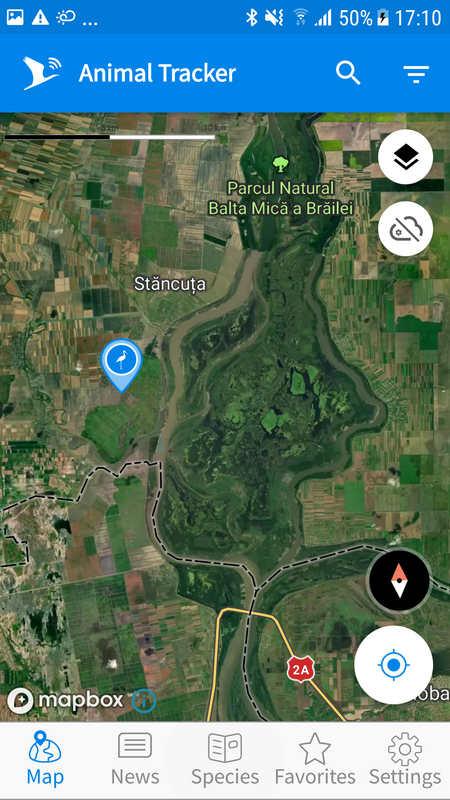