Yes Alice, it is a jay. Nice to see, that the cam is still open

11:04 Do I hear bees in the background or are this flies between the birds? Last year we had a bee-cam here after the wildboar-cam had closed. Was this at the same place? 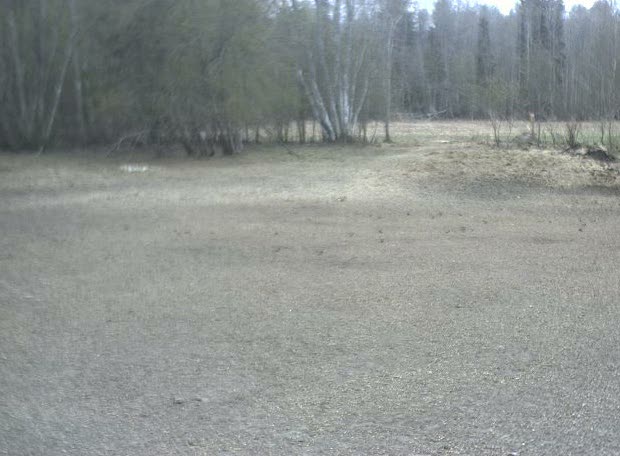 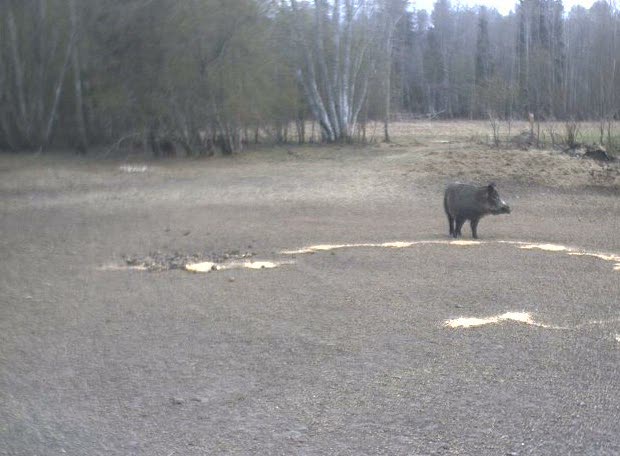 In all this excitement, the first pigs have arrived, the cam is still open

21:46
When I see the small boar in the middle I suppose that many boars have got piglets in autumn again or during last summertime. Boars can have babies during the whole year. Perhaps it is the normal way to get the piglets in early springtime, but when I saw the first smaller ones when the cam opened I was wondering about the stripes which were to see so clear. Normally they loose the stripes after about six month (I don't know exactly) or a bit less and get a lighter brown hair - is different from region to region. Perhaps it is the cause that there are less piglets in the wood this spring?
But - please - this is my mind and idea - I am always thinking about life of this animals because we have many of them in our woods and farmers and hunters are in great sorrows about the bad things the boars make in fields and on trees, too. 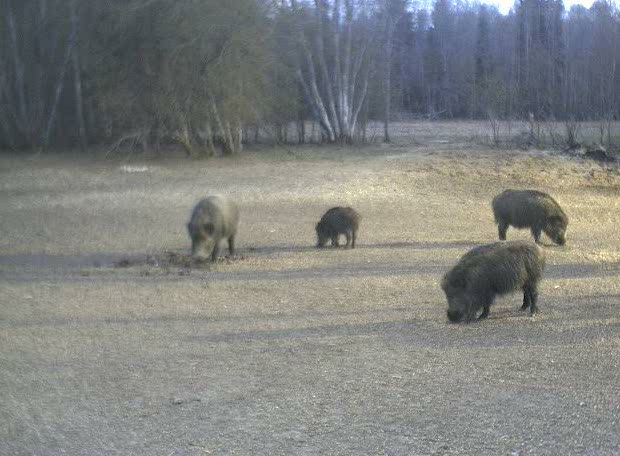 Considering the different size of the pigs (Überläufer), I guess they are born during different times of the year.

My colleague, who lives in a very small village and knows lots of farmers and also hunters, and I were talking already a few times about this topic (when I look at the cameras in office, he can see, so I have told him about them). Basically we agree that the many problems created by the pigs (over here) are due to the fact that agriculture becomes more and more an industrial way of growing things. What they (the farmers) grow is mostly plants which grow fast and bring lots of money. Like corn (Mais) which has become a big factor for bio gas (and as I guess E10) and this is something which pigs love. There are gigantic fields only with corn, or rapeseed, year after year, and the pigs are feasting in them and hiding in them and naturally the number grows. Have you ever heard of wild boars outside some small specific areas some 20, 30 years back? Spessart was famous for them, but I have not heard of wild boars in the area where I grew up.
I won't talk about hunting, I have seen it was also discussed here, I better not read those things, as I have my views about that, but let me add, that my colleague said, that most of the boars the hunters shoot can't be used for human consumption as, 30 years after Chernobyl, they still are highly polluted with radiation!
“One can measure the greatness and the moral progress of a nation by looking at how it treats its animals” (Mahatma Gandhi)
"You can judge a man's true character by the way he treats his fellow animals" (Paul McCartney)

I have heard that the corn fields have definitely encouraged too many pigs. And of course makes farmers angry.
Top

Yes, and some try to keep them out with loud music

I'll be off now, my alarm clock will wake me up very early tomorrow and I think I have to settle down a bit before turning lights off.

Good night to you all!
“One can measure the greatness and the moral progress of a nation by looking at how it treats its animals” (Mahatma Gandhi)
"You can judge a man's true character by the way he treats his fellow animals" (Paul McCartney)

A jay pecks for breakfast, & some KBVs join him. I am glad the boar cam is not off yet.

15:52 cam is still open and somebody drove through the place 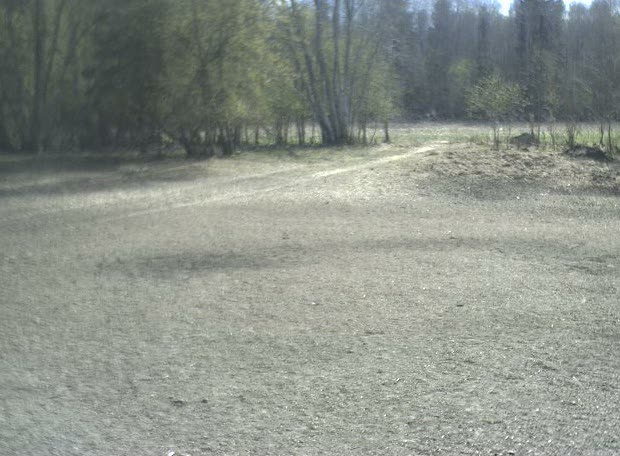 I am happy about every day the cam is working
I like boars.
Top

greeneyes wrote:
I am happy about every day the cam is working

I'm back from vacation 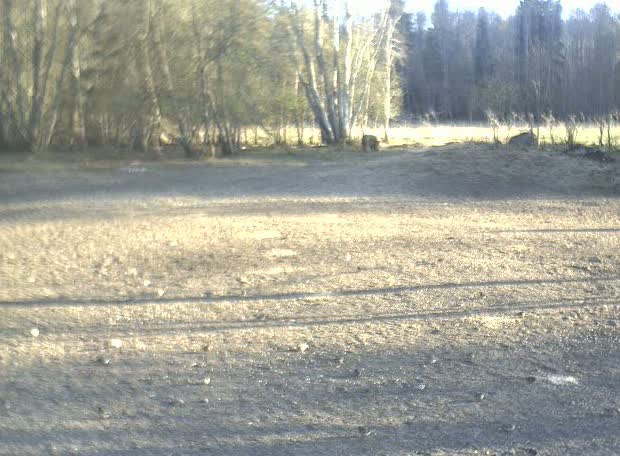 I googled.
I think it's this one

Here is a link where you can find bird names and translate
http://www.knutas.com/birdsearch/
Top

It's so difficult to really see those small birds, the cam is not really focused and the birds are so small. But since I also think I saw blue on them, it might be a chaffinch/Buchfink http://de.wikipedia.org/wiki/Buchfink http://en.wikipedia.org/wiki/Chaffinch
“One can measure the greatness and the moral progress of a nation by looking at how it treats its animals” (Mahatma Gandhi)
"You can judge a man's true character by the way he treats his fellow animals" (Paul McCartney) 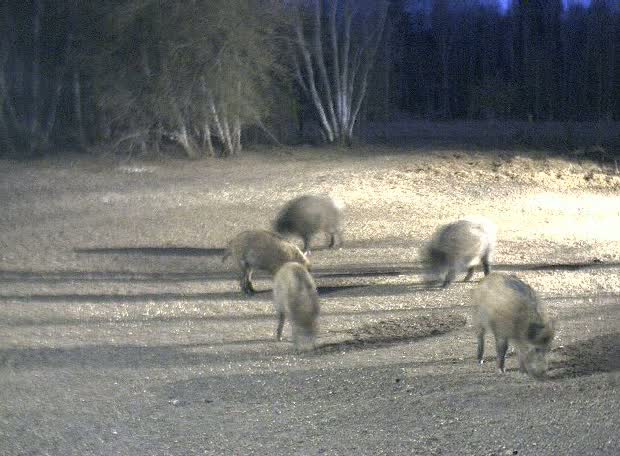 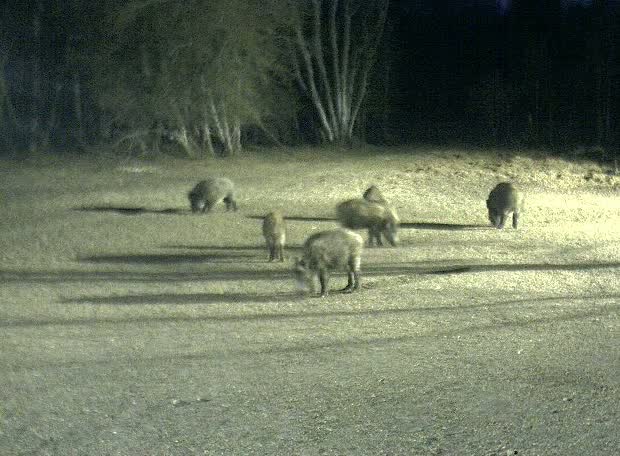 They make a funny crunching noise today - did Peep bring them crunchies?

many bird sounds on the front page