The nest of goshawks in this location in Riga has been known since 2016 – it is believed that the breeding couple moved here from another nest about 600 metres away. In the immediate vicinity of the nest there are both industrial objects, the sounds of which can often be heard, and private houses. The tree of the nest is located in a small wet area overgrown with weeds and shrubs. The nest is built in a black alder, which grows on the edge of a ditch. The goshawk has built his dwelling on the remains of a crow's nest. The metal wires twisted in the nest still evidence that the crow was a supporter of durable building materials.

The nest was controlled during this time and the nestlings were ringed in it. This couple, and especially the female, is known among the ornithologists for their special character – she tends to behave particularly aggressively and attack people when they are just approaching the nest. On the other hand, birds are accustomed to people and equipment operating behind the fence in the nearby industrial facility and do not pay attention to them. Interestingly, at the time the female laid her first egg, very close, about 50 m from the nest, a crow couple were building their own nest. Crows are a common food item for Goshawks, but it happens that hawks do not touch other nesting birds near their nest, and they make use of this safety zone.

The camera system was installed by Ģirts Strazdiņš, Arnis Zacmanis and Jānis Rudzītis. Thanks to SIA “Darba Spars” (https://www.darbaspars.lv) for cooperation!

In case the youtube address of the stream should change, you can find the actual one on the channel

Link to Goshawk topic in Latvian Dabasdati forum:
https://forums.dabasdati.lv/viewtopic.php?f=29&t=4230
Nature does nothing in vain (Aristoteles)
Top

I think the only limit is, that you can´t add more than 20 links in one post

I hope I am right about this

These two were born on the same day with about four hours difference and although they have been very equal there has always been a slight advance of (M1) in the plumage.

He was born the next day (about 14 hours later than M2) and in the plumage there has been more difference.

He was born about 20 hours after (M3) or something else.
This is the one I call youngest.

They have been together all the time and in many positions and he is noticeably bigger in size than the others but he doesn't always seem that way depending on the position. (Sometimes we have seen something in front of H44 compared to H21 and it seemed bigger but when taking a small step forward and being at the same height the difference is quite a lot).

Many thanks Bea for your quick opening of the topic and your efforts!

Thank you also for the offer that we may reserve.
I've kept one placeholder for me and one for Emiliano, since I'm starting the documentation now, but I'd like Emiliano to have a separate place for his eventual additions (stats, etc.).

If in doubt, I remove it again.

Thanks!
"Let nature be your teacher."
(William Wordsworth)
Top

Greetings and thanks for the transmission.

They are both there, to see if they let themselves be seen.
[/quote

Emiliano, I heard the call at 06:03 with great joy!
I was on my way to work and it made me feel good!

The nest is really not what I expected.
I was scared - yesterday.
H21 & H44 are now an established couple. By this time last year they were probably just in the bonding/finding phase as a new couple.
And actually they present an incomparable speed!
At least I 'expected' a little more preparation of the nest.

But well...it's our H's.
Not so well known as loving nest builders.

10:08 - 15 A familiar situation - angry gurgling. The crows tell us about the presence of the Goshawk.

The stream is jerky.
I hope we don't lose him again.
"Let nature be your teacher."
(William Wordsworth)
Top

Even a season later, the couple still communicate in a very special and unmistakable way.

I try no video.
Just following the stream is terribly exhausting. 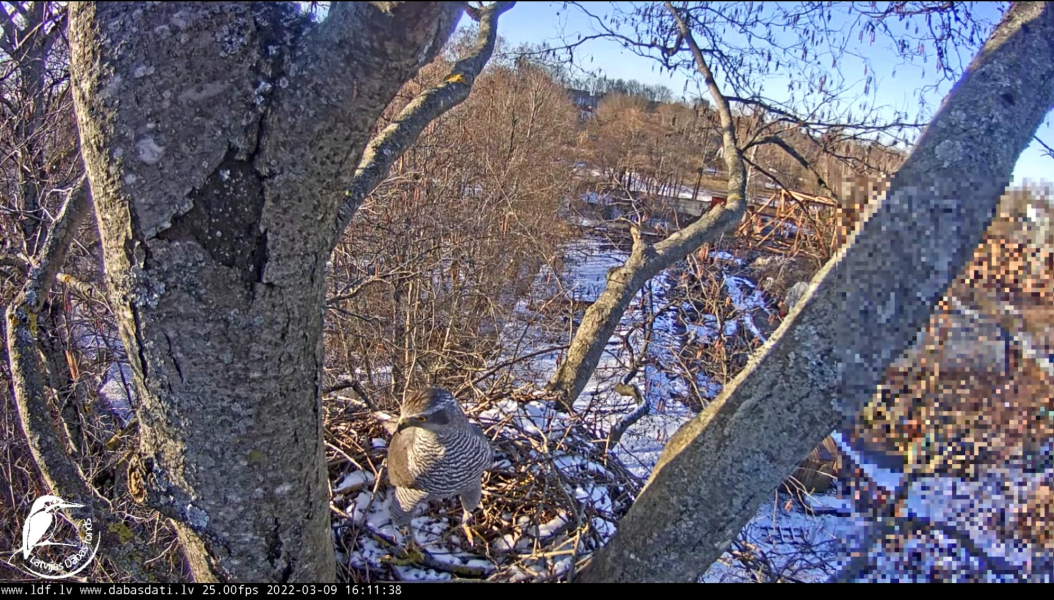 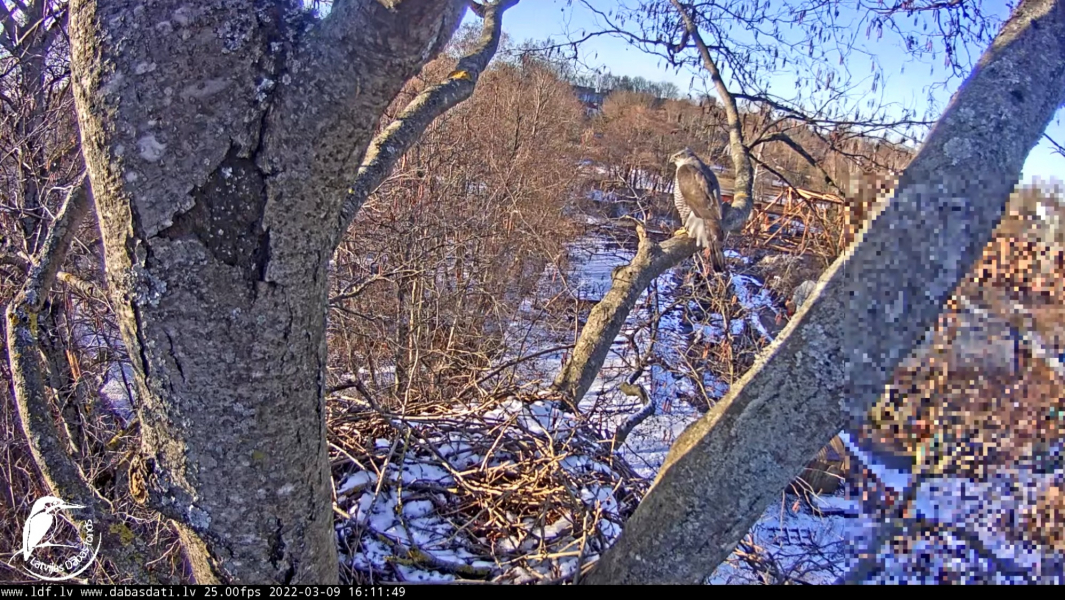 Climb higher, all the way to the top.

16:14 H44 leaves the branch towards the industrial area.

Hey, the nest is taking shape. 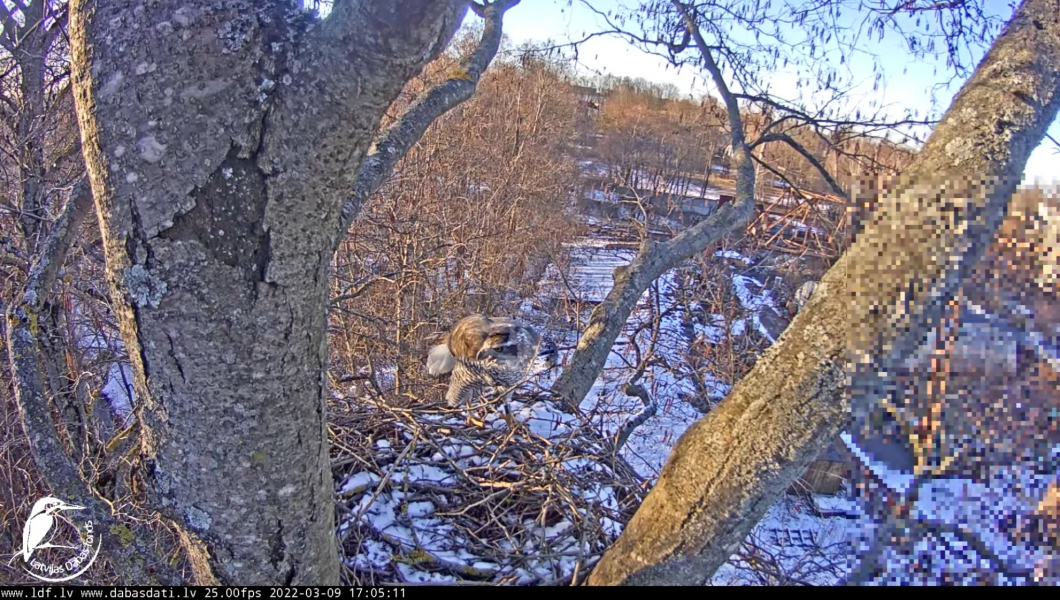 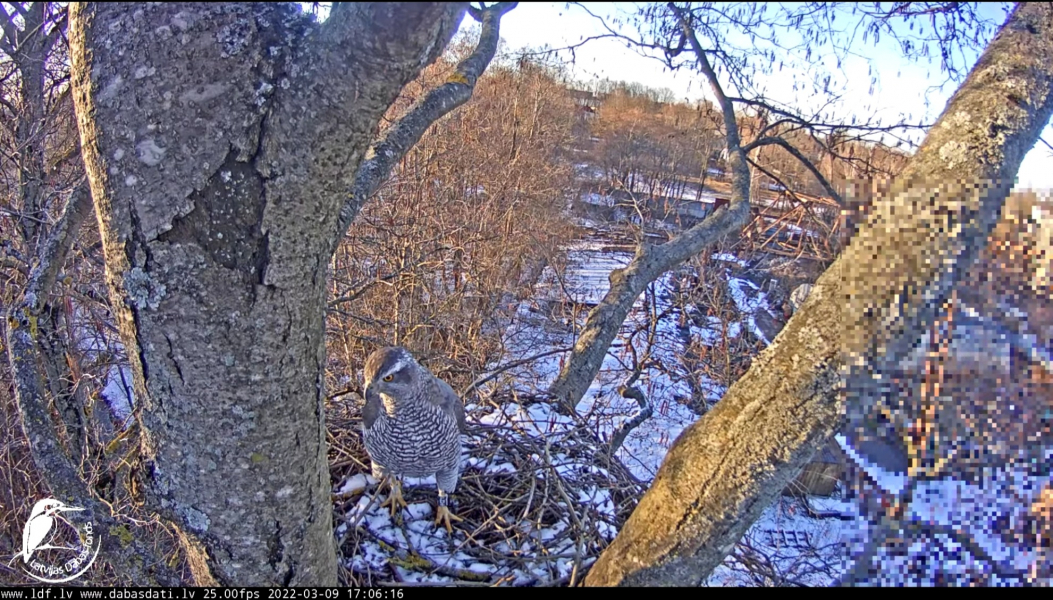 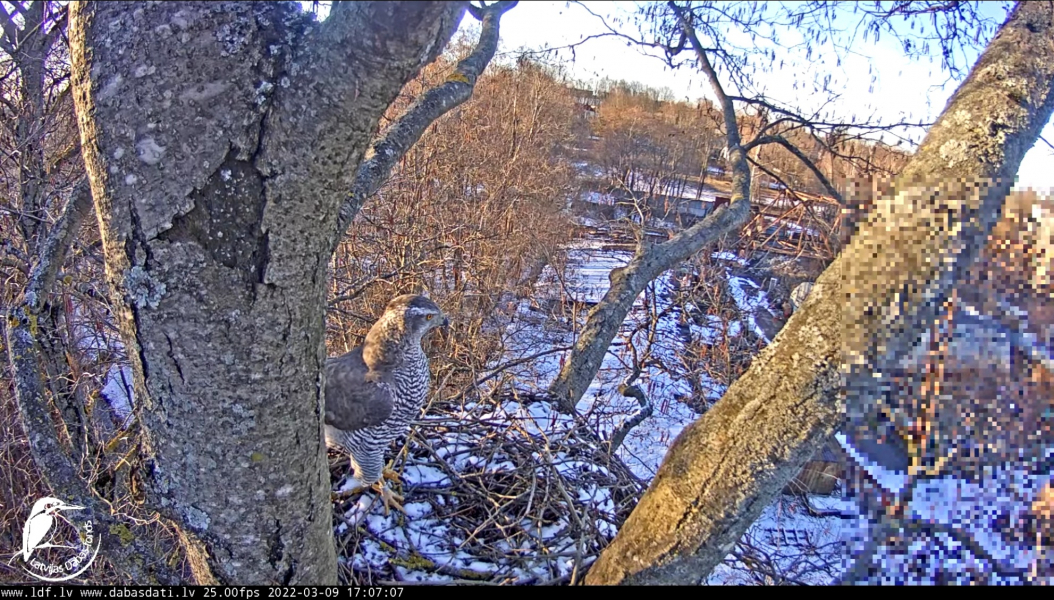 She doesn't move much at the nest either.
I almost felt like she was getting to know the nest anew.

H21 jumps onto the side branch, then exits the tree.
"Let nature be your teacher."
(William Wordsworth)
Top

It's fascinating that we can distinguish H21 and H44 despite their new plumage. Her nature, her way of expressing herself (key and voice colour) and the jagged movements of H44 have not changed.

Their breast feathers are in transition from drops to ribbons. Very interesting to see. Characteristically, her eyebrows have hardly changed.
H44 has a faint stripe to the back of his head (he'll also likely wear a heavy dark hood), while H21 still has shorter but wider eyebrows. 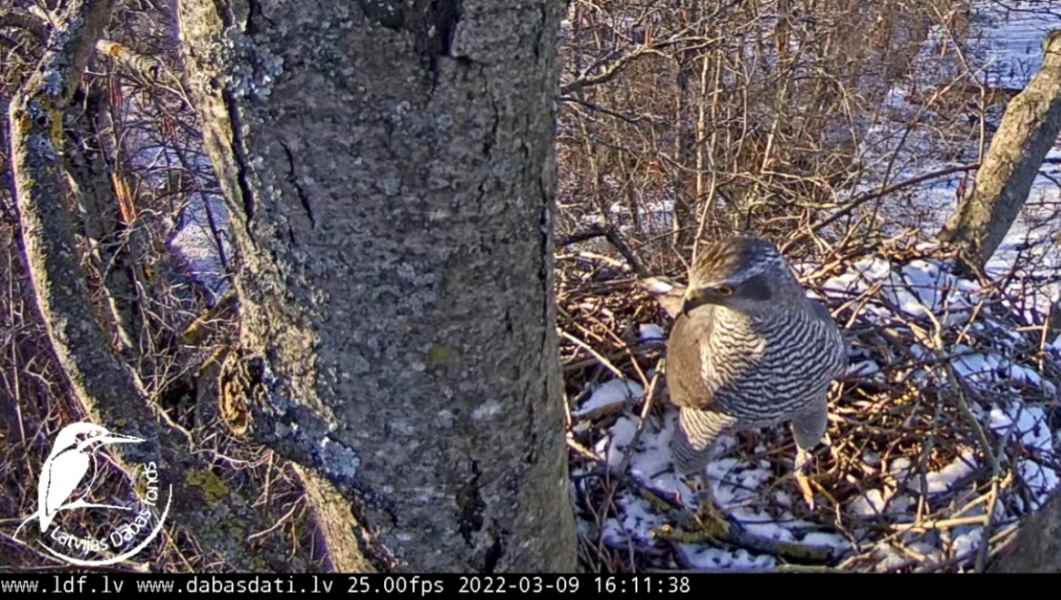 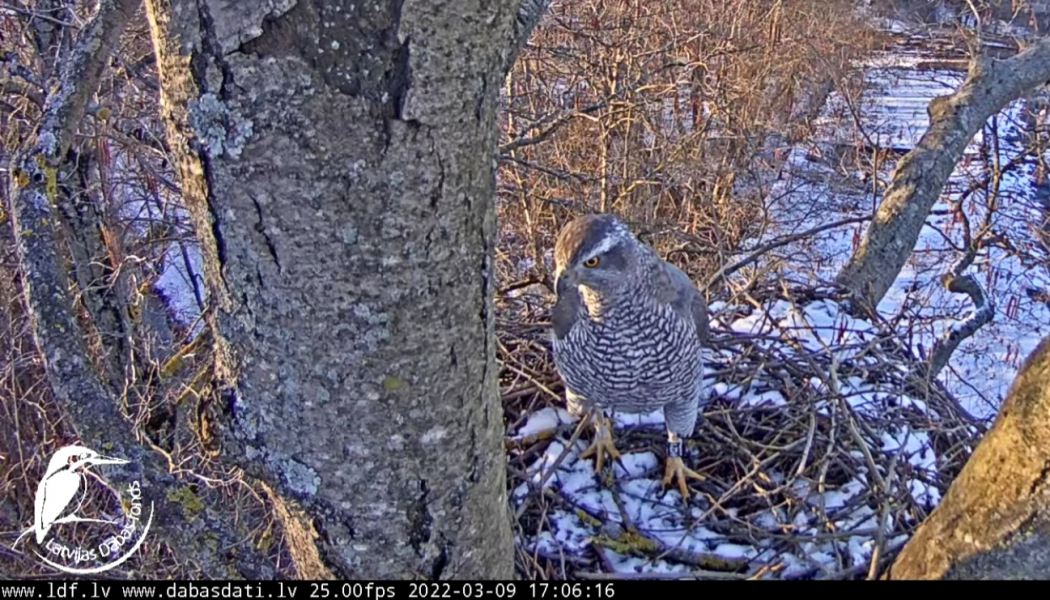 This is not for the impatient today...
The stream stutters through hours without Goshawk.

But we have lots of cute little birds busily combing through the nest.
Great Tits, Hawfinches... 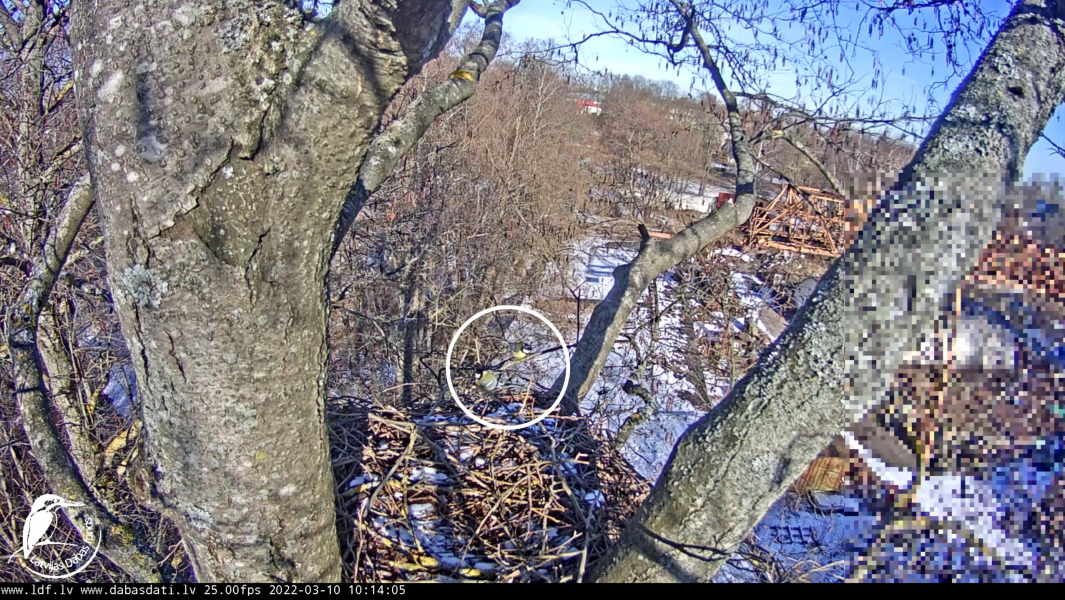 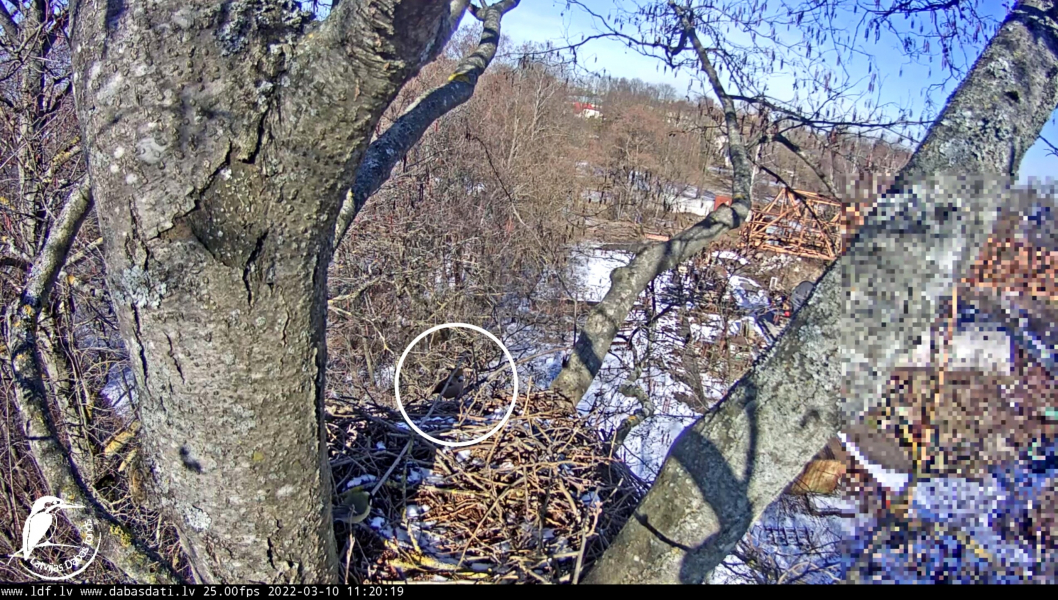 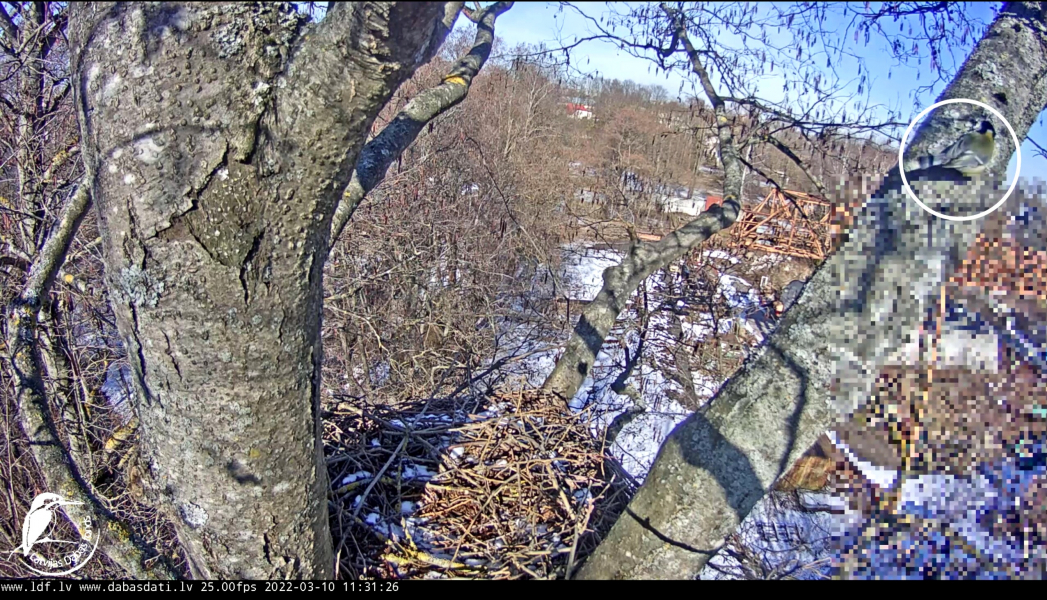 Ha, while I write:

12:49, '52
The calls are interrupted by the stuttering of the stream. What I heard were quick, short calls.
"Let nature be your teacher."
(William Wordsworth)
Top

12:54 A Goshawk flies past the nest tree from the left towards the industrial site.
Then two votes I think.
"Let nature be your teacher."
(William Wordsworth)
Top 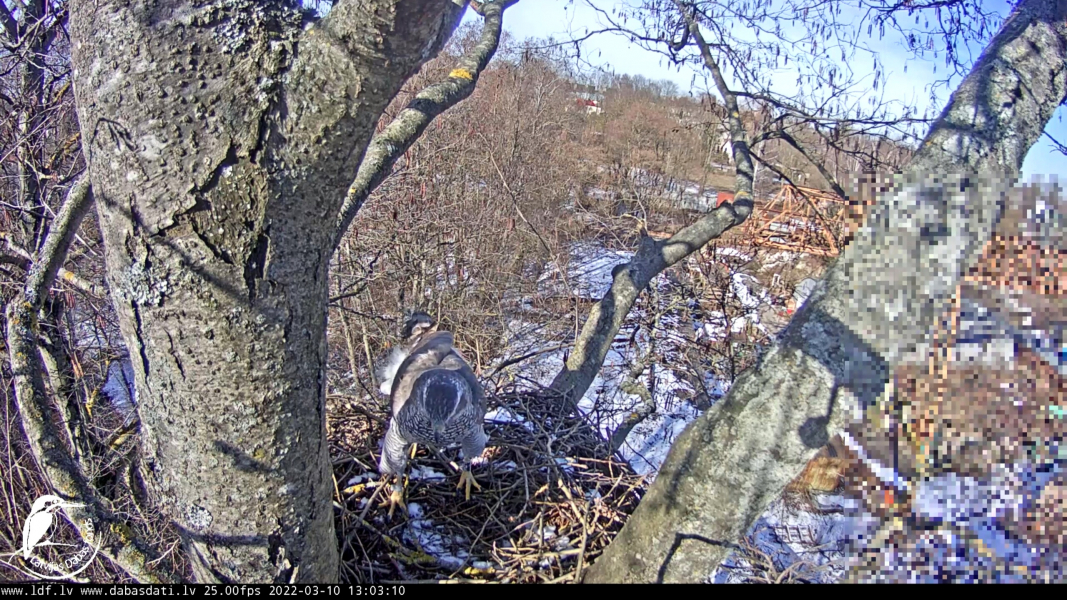 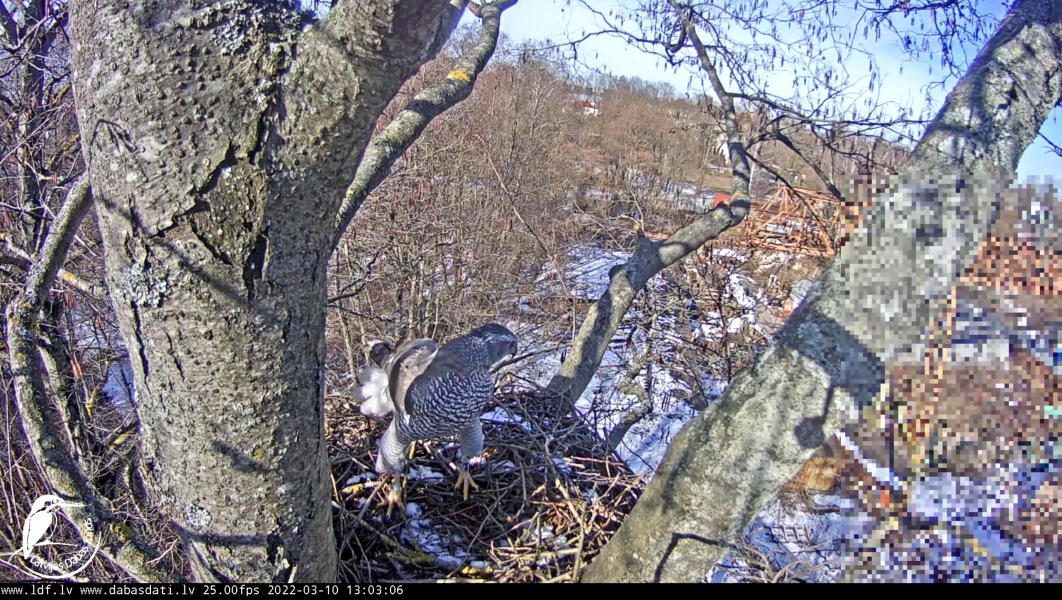 H21 jumps onto the side branch, climbs back up to the top. 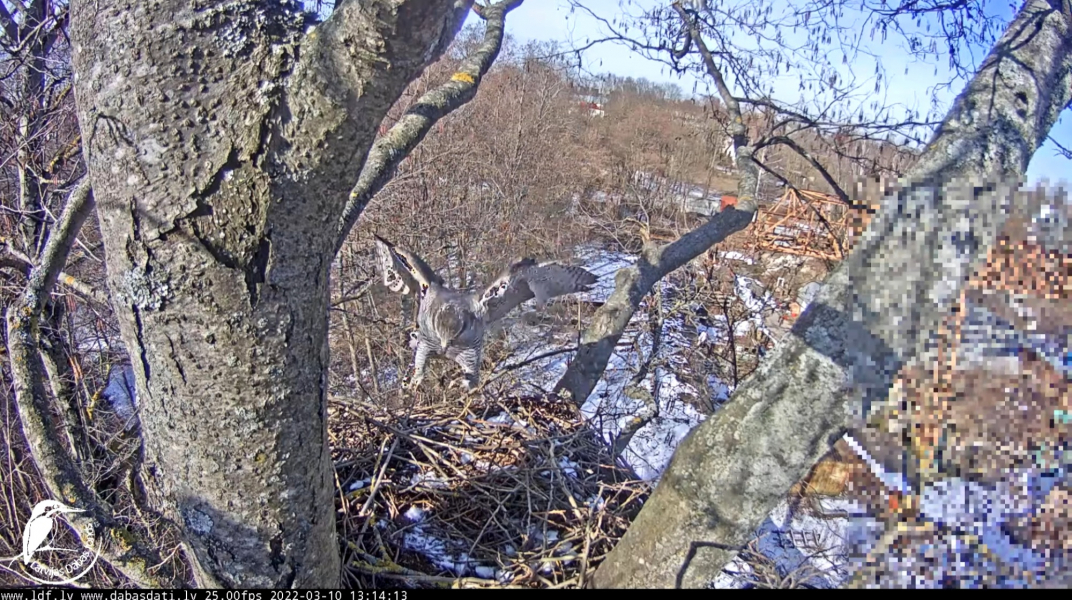 
(sorry for the dropouts)

H21 comes down from above, H44 leaves the nest.

Then she jumps back onto the side branch, calls. 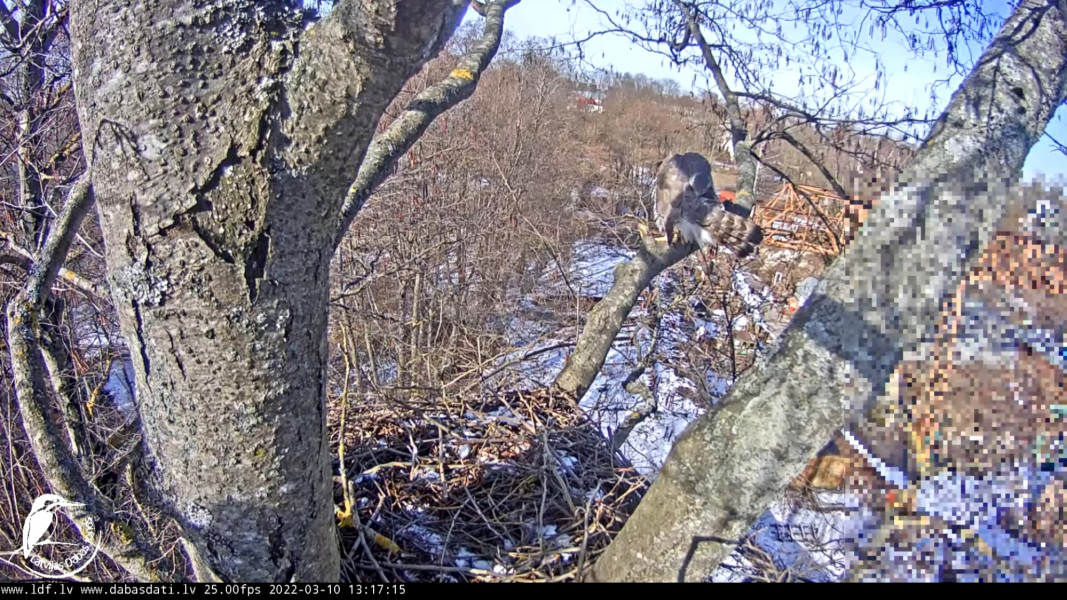