With thanks to Anne7 for this comprehensive introduction.

This Black Stork nest is located in Karula National Park which is possibly the best breeding area for Black Stork in Estonia nowadays.

Karula National Park
The smallest (surface area: 123 km²) and hilliest national park in Estonia, Karula National Park is located in the Karula Uplands, on the borders of Valga and Võru counties.
The unique, beautiful terrain of the Karula Uplands formed more than 10,000 years ago as a result of the action of glacial ice. With the continental glacier retreating, the northern section of Karula came to feature predominantly dome-shaped kames, or hills covered with fields, grassland or forests. Kames are separated from one another by small, wet meadows, forest stands, patches of marshy ground and lakes. The hilly section of the national park is its most densely populated area. The southern part of Karula features groups of eskers and kames with mires and forests, where human settlements are quite rare. The highest point in the uplands is Tornimägi Hill (137.8 m) in the village of Rebasemõisa. The Karula Uplands boast 60 lakes, of which 40 are located in the national park. The largest among them is the picturesque Lake Ähijärv (176 ha) with its winding shoreline, next to Ähijärv is Karula National Park visitor centre.
Karula is the name of a former parish, thought to come from the word karune, or rough. This word perfectly describes the region, which abounds in wooded hills difficult to access or cultivate.
The varied terrain of Karula was placed under national protection, with the original landscape protection area being designated a national park in 1993. The park was established to preserve the natural environment found in the hilly landscapes characteristic of Southern Estonia, where forests and lakes abound, as well as species under protection and the cultural heritage of the area.
© https://kaitsealad.ee/en/protected-area ... nal-park-0 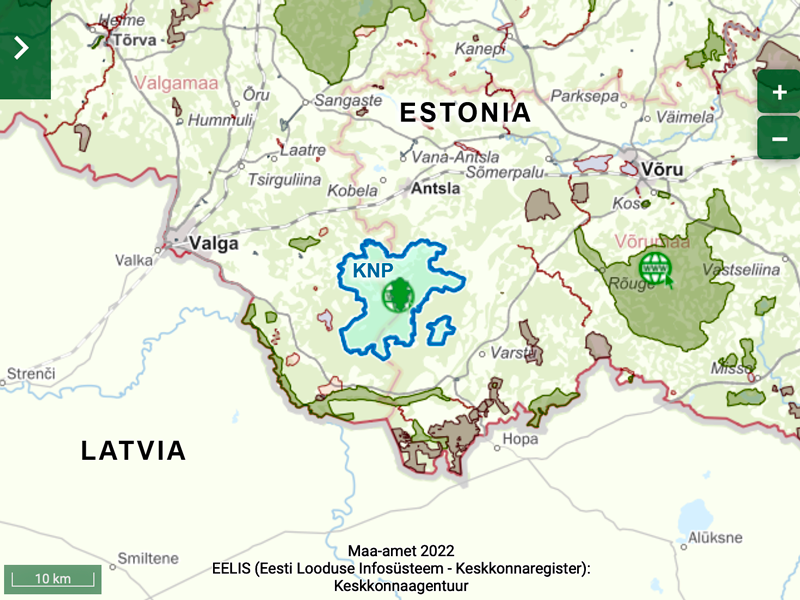 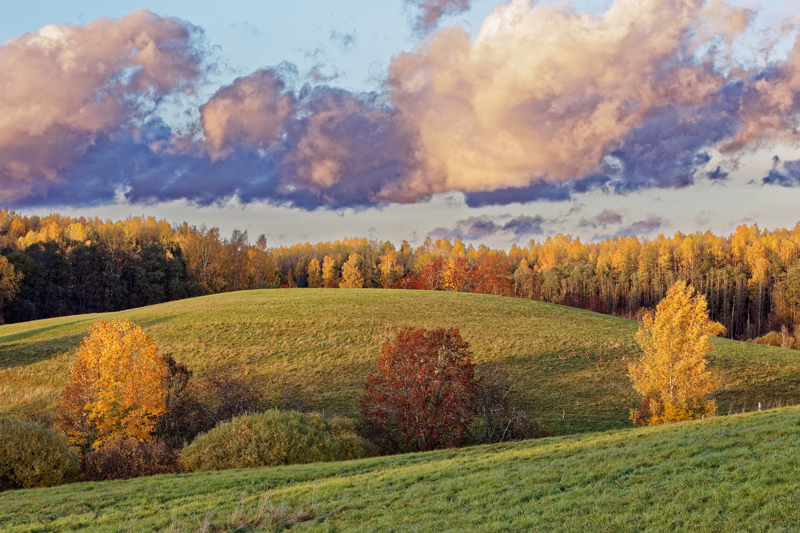 The original nest was found in February 2016 by the Eagle Club's (Kotkaklubi) nest search camp.
The old nest collapsed after the 2017 breeding season.
A new - artificial - nest was build by Urmas & Friends in the same tree, before the 2018 breeding season began. 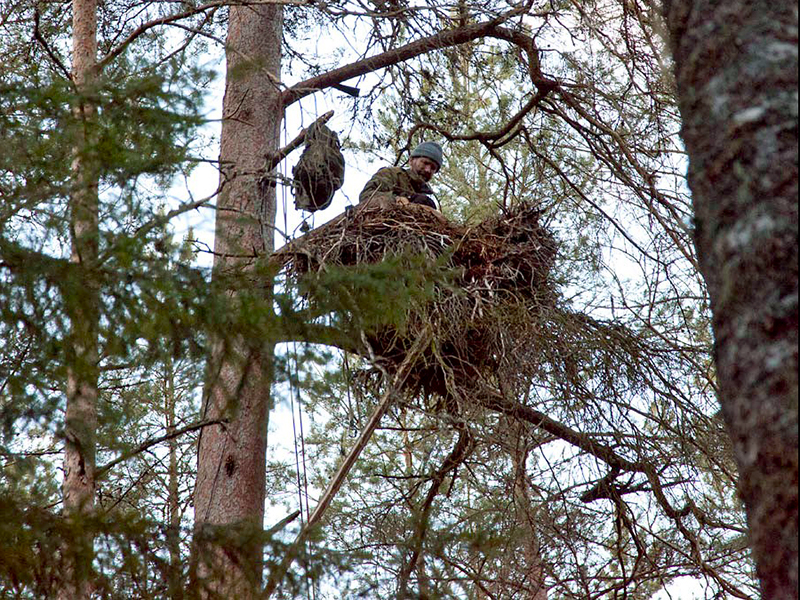 2016 - Karl (715R) and Kati
There were 4 eggs. 3 hatched. One of the 3 chicks had a severe growth retardation and did not develop normally. That chick clearly had a health problem and has been eliminated by Kati. The other 2 (Kulla and Kalli) were well fed and fledged successfully. They had no transmitter.

2017 - Karl (715R) and Kati
There were 4 chicks. Although the youngest looked healthy, it was eliminated by Kati.
The reason why bird infanticide (brood reduction) occurs on a nest is well described here:
https://www.looduskalender.ee/forum/vie ... 34#p686634
The remaining 3 storklets (Unu, Tali and Usin) were well-nourished and fledged successfully. They had no transmitter.

2018 - Karl (715R) and Kati
There were 4 eggs, but only 3 hatched. All 3 storklets were healthy and well-fed. All 3 fledged successfully. Unfortunately Päike and Maru perished during their first autumn migration. Our Karula perished in Turkey, shortly before his 3rd birthday.

2019 - Karl II (716C) and Kati
Karl perished on his way home in the spring of 2019. A new male took his place (Karl II). Kati accepted him immediately. There were 4 eggs. All 4 chicks hatched. Kati eliminated the youngest chick. Another storklet was knocked from the nest by a goshawk. The 2 remaining storklets, Oru and Aru, fledged successfully, but perished during their first autumn migration

2020 - Karl II (716C) and Kaia
Kati didn’t return to the nest in spring. Probably she perished.
Karl II waited on the nest. Finally a very young (presumably 2 years old - born in 2018) female arrived (Kaia).
She laid 2 late eggs, but abandoned them. Kaia was then very skinny and not in good condition, and probably also too young to take on a maternal role. No chicks hatched.

2021- Karl II (716C) and Kaia
There were 4 eggs. One of the eggs broke during incubation. 3 chicks, Udu, Pikne and Tuul, hatched and fledged successfully. Little Tuul was predated shortly after starting his first migration. The 2 others flew to Africa, but didn’t send a spring update (so far)

This year there is a new camera with night vision.
Top

This year we have a different camera. It has night vision and a moderate zoom function. There is no pan-tilt function, but really, we only need zoom for instance, to be able to identify food brought to the nest by the adults, or to have a closer view of the chicks, if desired.

Following text by Urmas and Triin ;-
We are using the AXIS P1455-LE camera at the nest. Therefore we’re able to meet the wishes of the friends and supporters of the Black stork to see what is happening in the nest at night. Black stork cameras don't need to be camouflaged. So far, we haven't noticed the camera disturbing nesting birds. On the contrary, adults have sometimes wanted to lift the camera into the nest like nest material that has fallen away. The camera is transmitted via mobile Internet. The image is transferred to the server of the Estonian Fund for Nature, where the video is being prepared and saved for YouTube streaming. The livestream is broadcasted through the Eagle Club YouTube channel. We recommend following the Kotkaklubi channel in case the link for the broadcast changes due to technical reasons. All other Estonian eagle and black stork nest cameras and a Capercaillie camera can also be found on the Eagle Club channel. The use of the stream from the nest elsewhere for non-commercial purposes is not prohibited, but please let us know if possible (send a message to urmas (ät) kotkas.ee)

To help identification of Kaia, who doesn't have rings, here is a picture of her eye and beak. 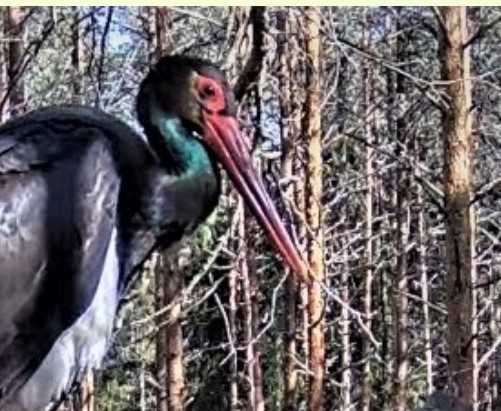 
ARRIVALS
On 8 April, KARL II (ring number 716 C) arrived at the nest.
Video of Karl II's arrival at the nest. He made his usual noisy entrance!
https://www.youtube.com/watch?v=7zeGyeV ... 4&index=10

While we are waiting for the link to the live camera stream here is the link to the Eagle Club 's Youtube channel. When we can see "our" camera it will appear on the Kotkaklubi channel so keep watching.
https://www.youtube.com/channel/UCCvBXT ... Saqd19N0Sg
Live stream began April 11, 2022. See above for link. 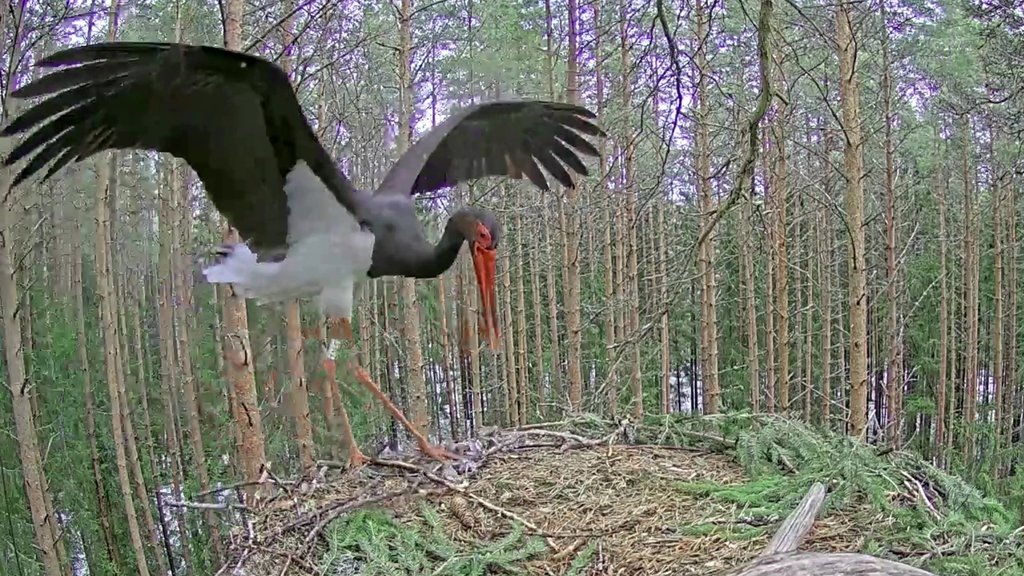 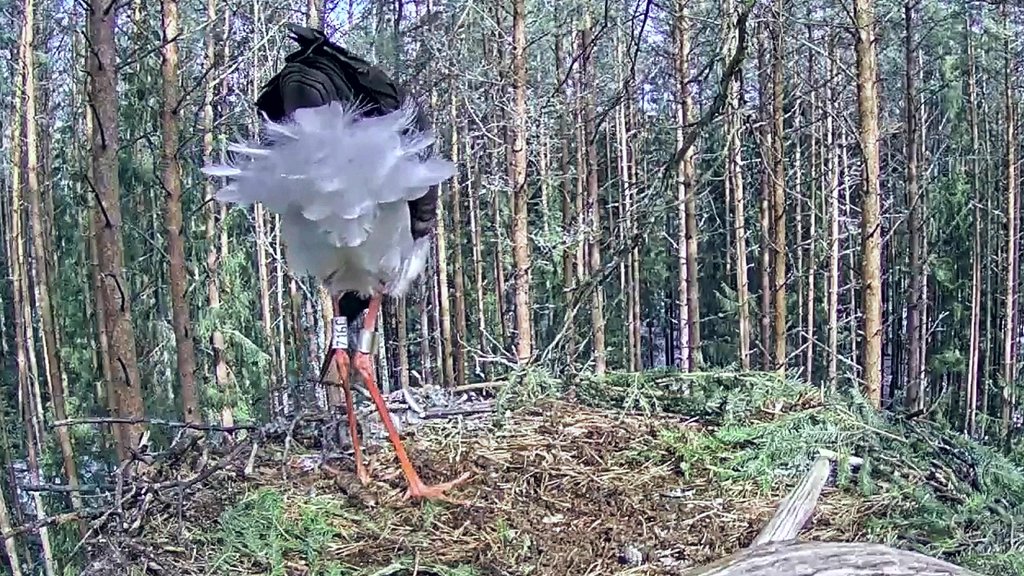 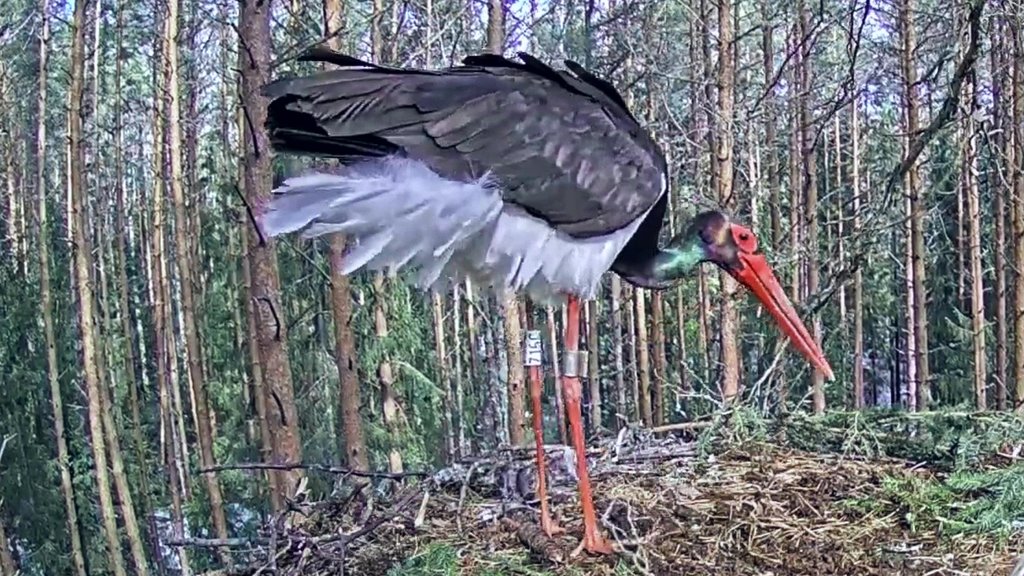 I have permission from Kotkaklubi to use the video. it will be available soon on my channel. They say: Live stream hopefully tomorrow..

I made some screenshots too. The camera view is a little different this year. 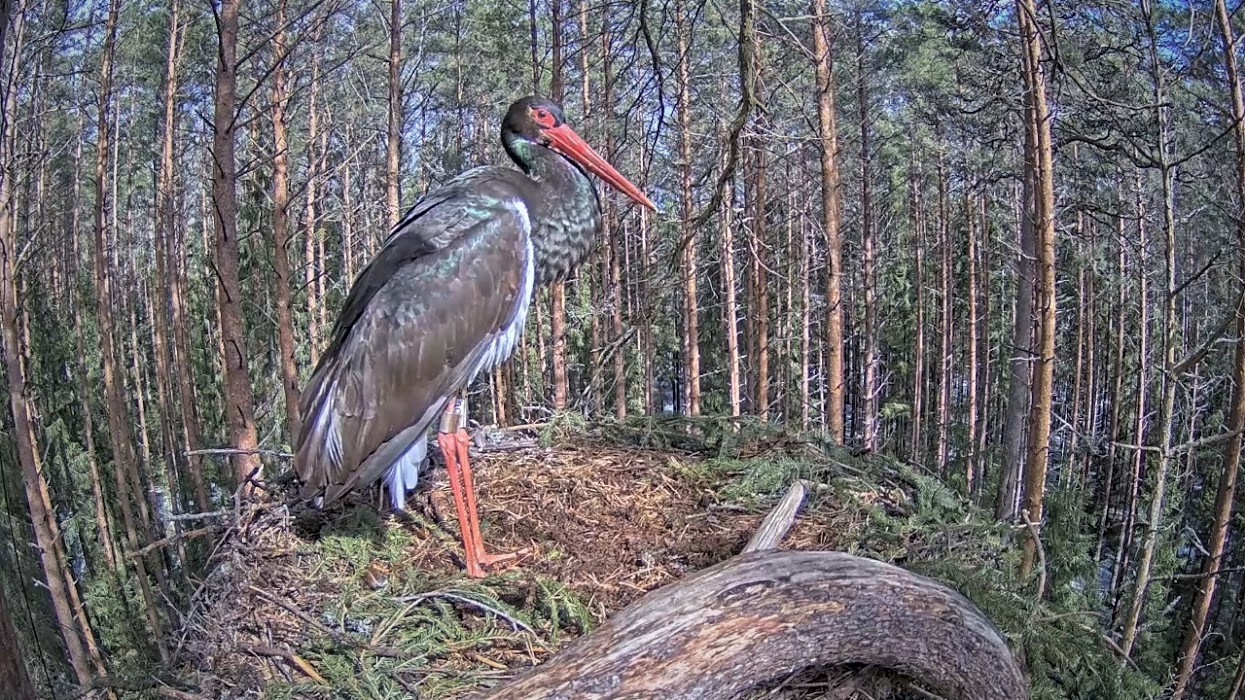 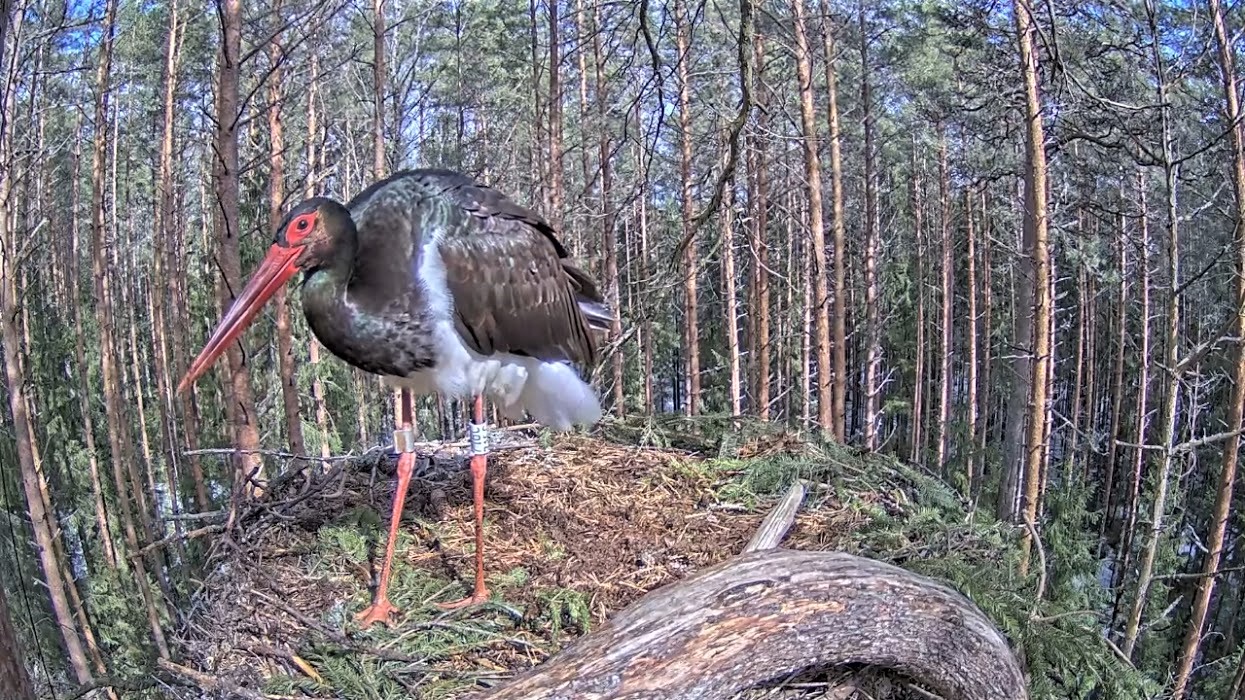 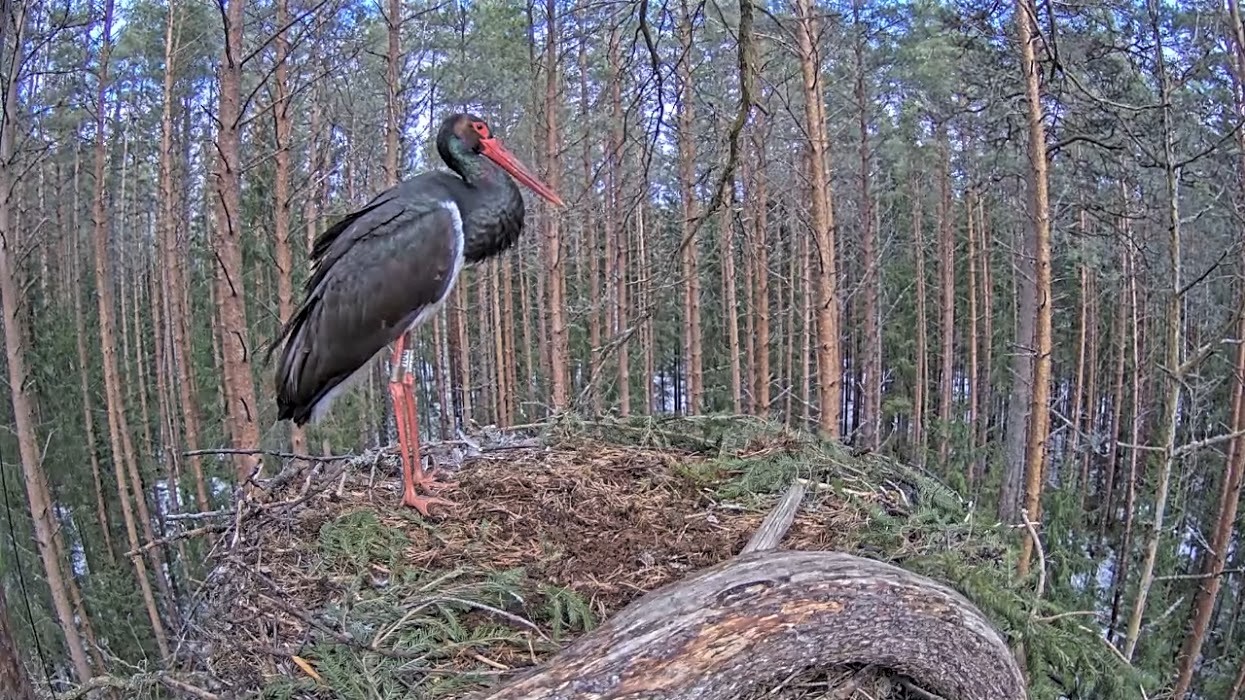 It was nice to see that Karl II started cleaning the house right away. Cleaned the nest floor and lifted the branches. So nice he's home! Karl II looks very good, he seems to have rested and eaten well. Now we are waiting for Kaia, the little princess!

Jo, thanks for opening the new topic!

Liz and Heloise, many thanks for the beautiful screenshots!

Little Princess, Karl II is waiting for you. Hurry up!
Have you 2 read it, Karl II and Kaia? Bigfan wishes you "a lot of handy little Karls this year"!
... Little Kaias are okay too, I'm sure!

May the season be successful and prosperous!

Hopefully the cam will be online soon.

I wish a good summer to the black stork families in the Karula forest!


And at the same time a small question how intended...

shouldn't it be Kati?

because Karl II's femalefriend is Kaia.

Thank you for that, Treia. I will investigate in the morning.
Top

715R was the ring number of our Karl (the First).
Karl II has ring number 716C
Kaia doesn’t have a ring.
“Clearly, animals know more than we think, and think a great deal more than we know.”
— Irene Pepperberg
Top 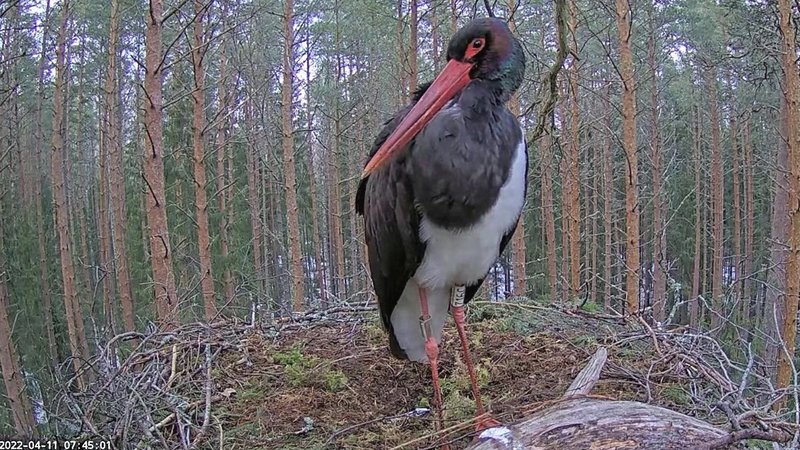 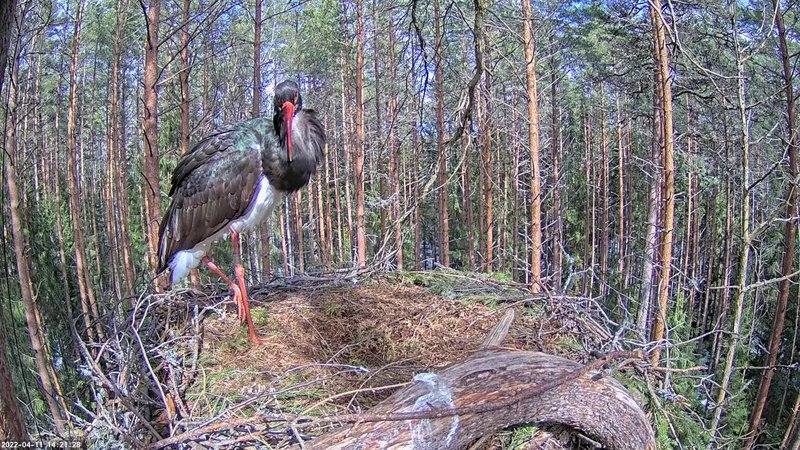 he is still waiting

The camera is online!

Thank you Urmas and thank you Kotkaklubi!
Thank you too, Jo!
“Clearly, animals know more than we think, and think a great deal more than we know.”
— Irene Pepperberg
Top

Thank you very much for the cam! 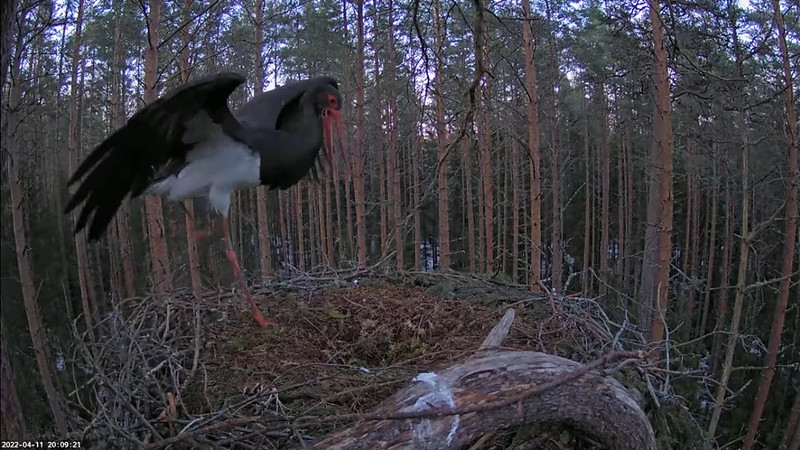 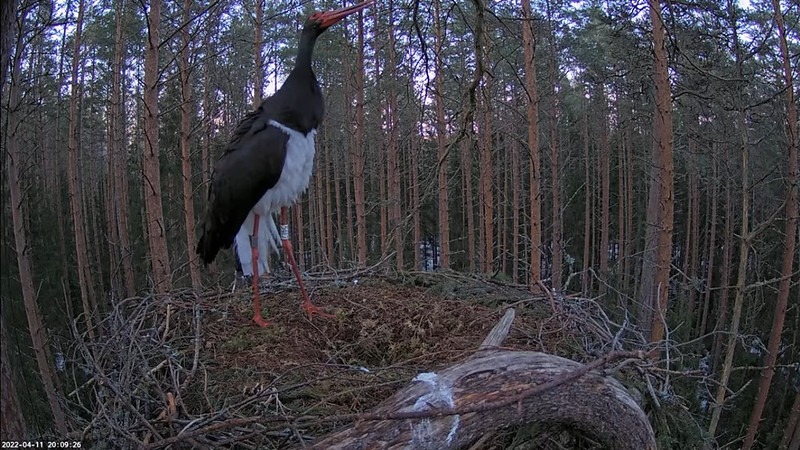 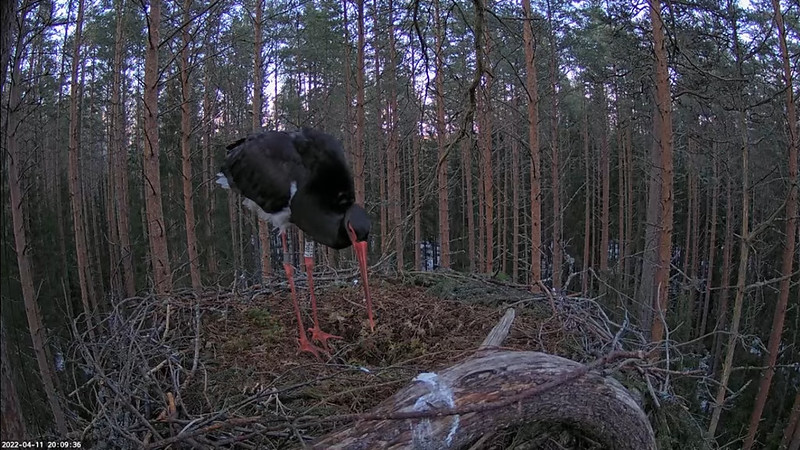 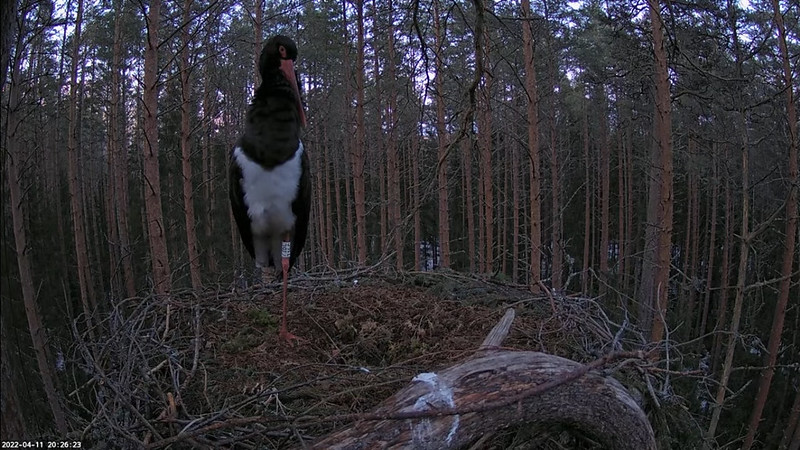 And now I discovered that we have a cam with night view! 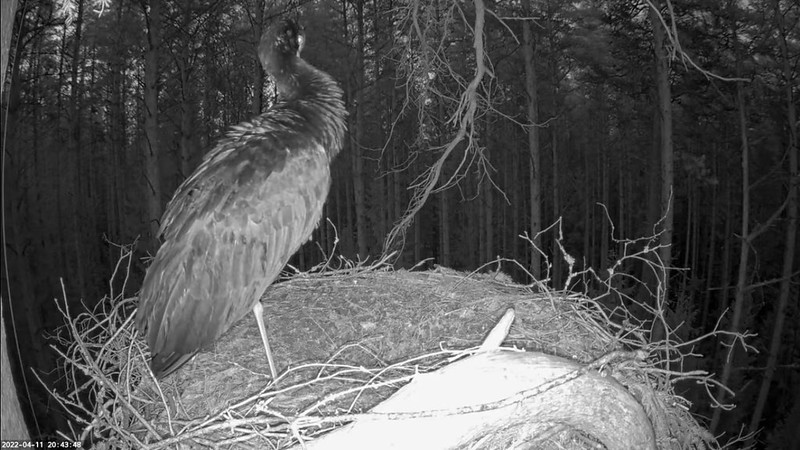 Thank you so much, Urmas and colleagues!

It’s so good to see our wonderful Karl II !

Kaia isn’t there yet.
But Eedi, Timmu and Nurme aren’t home either.
Everyone seems to be a little delayed this year…
“Clearly, animals know more than we think, and think a great deal more than we know.”
— Irene Pepperberg
Top

and Welcome Karl II! I hope that Kaia will come home too.

Thanks to the hard-working Urmas and the team Kotkaklubi. The camera can night vision?
Freedom!
Top

I was hoping to see you soon too, Swenja!

Oh boy, when will we sleep, now that this camera has night vision?!

Anne, this year Karl II arrived earlier than last year. Wasn't it April 12 in 2021? He's 4 days earlier.
I also hope, Kaia will arrive soon. Every day without her is hard for our Karl II. :-)
But the most important thing is that she had survived the winter and manages the long journey at all.

And Kaia the day after his arrival?
Well, it’s not very important at the moment.

As you say: the only thing that matters is that she will make it!
“Clearly, animals know more than we think, and think a great deal more than we know.”
— Irene Pepperberg
Top

Two pics from earlier today, when Karl II left the nest in the afternoon. 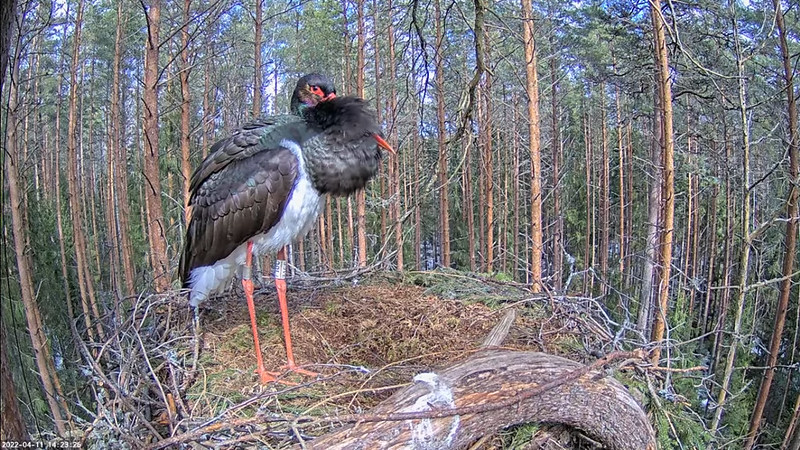 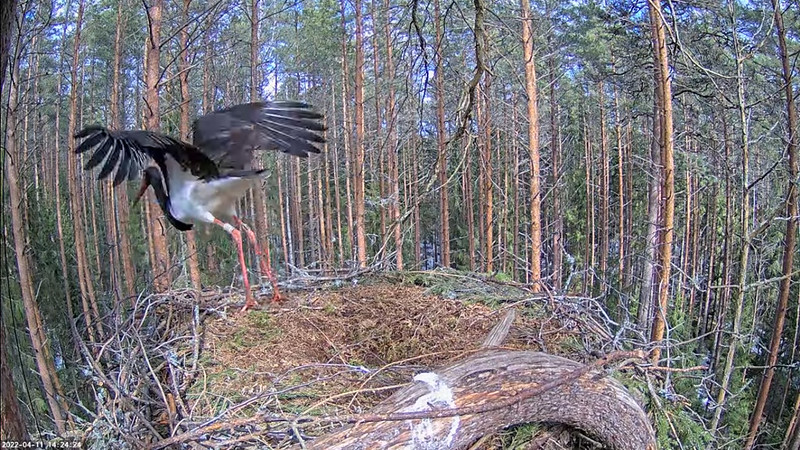