ENG Goshawk (Accipiter gentilis) nest camera
Recently, the Goshawk is better known as the city bird. But when the opportunity appeared, we also installed the camera next to the nest of an old-fashioned Goshawk in a middle of woods. Most of them breed in the woods, far away from human settlements, and catch wild birds for prey (so keeping those populations healthy in natural conditions).
Although unauthorized people probably don't get to the camera view in the forest, anthropogenic voices are heard here (like almost everywhere).
This camera nest is located in Rapla county, northern Estonia. Last year the offspring flew out of it, but no more is known.
The female Goshawk currently seen in the nest has not yet acquired the plumage of adult birds, so it may be that it is nesting for the first time.
In general, forest living Goshawks are later in nesting than urban ones. Thus, the first egg appeared in the nest on April 13.

Reserved
Nature is for everybody.
Top

Reserved
Nature is for everybody.
Top

I made a snapshot today, both on the nest, and I think there is already a third egg 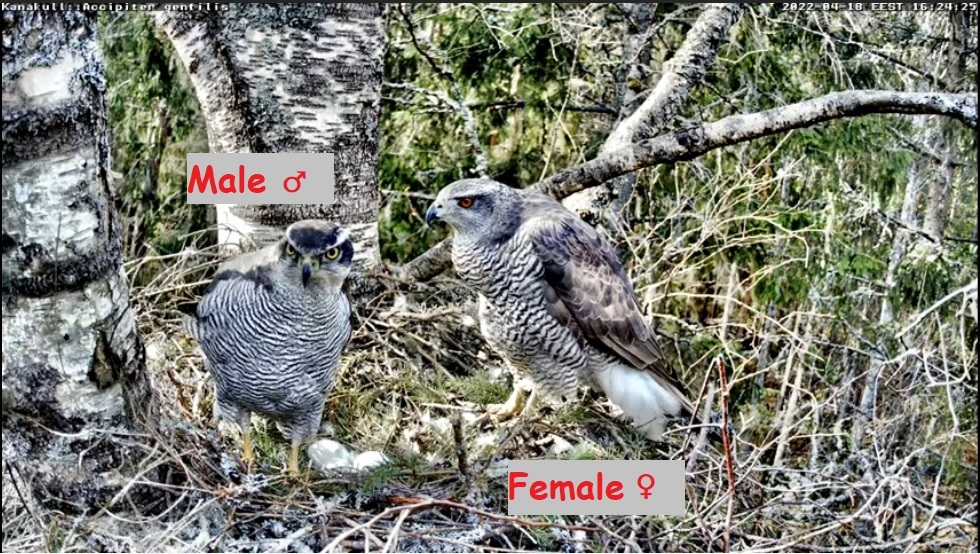 A thousand thanks for opening the topic on this nest.

I would have asked tomorrow at the latest.

The female began pushing hard at 15:49. She's having a hard time...it was plain to see and hear. She makes beeping noises and lowers her body deeply. Spreads its wings and changes posture (works and supports a lot with leg) ...she lays the egg very lively. 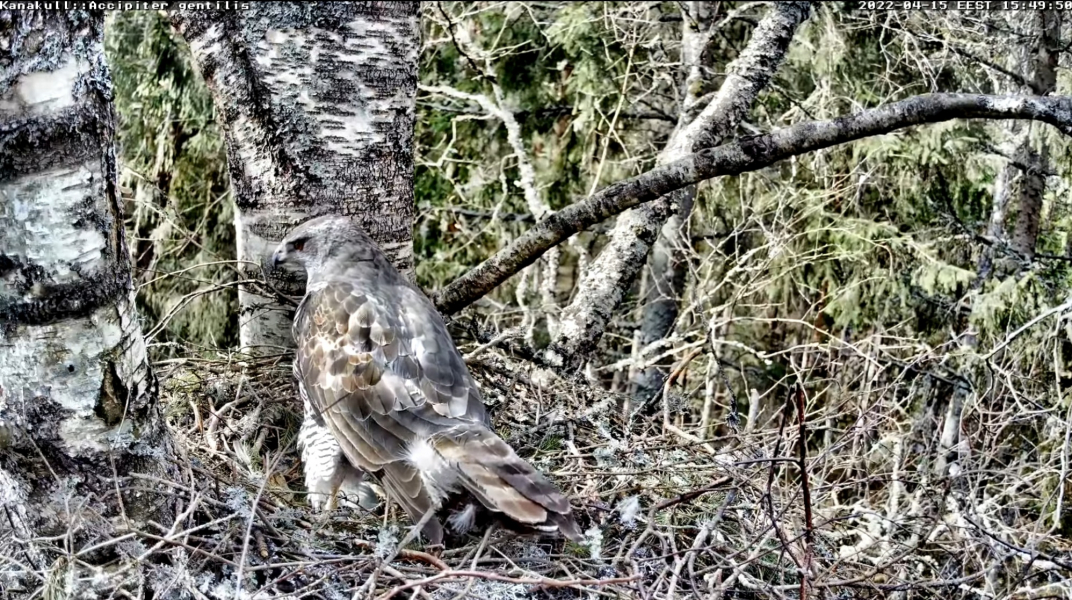 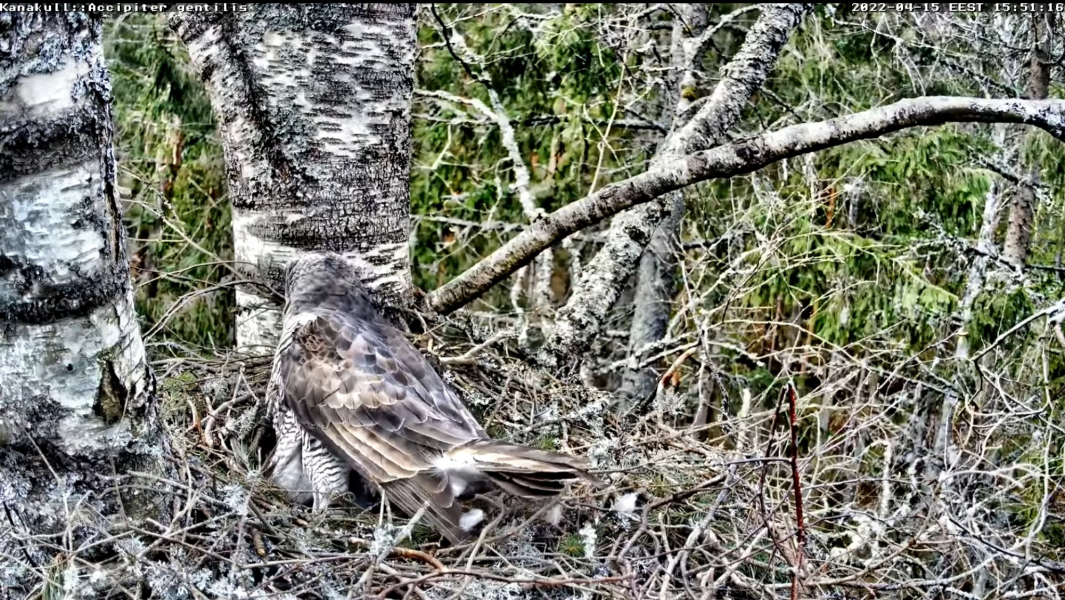 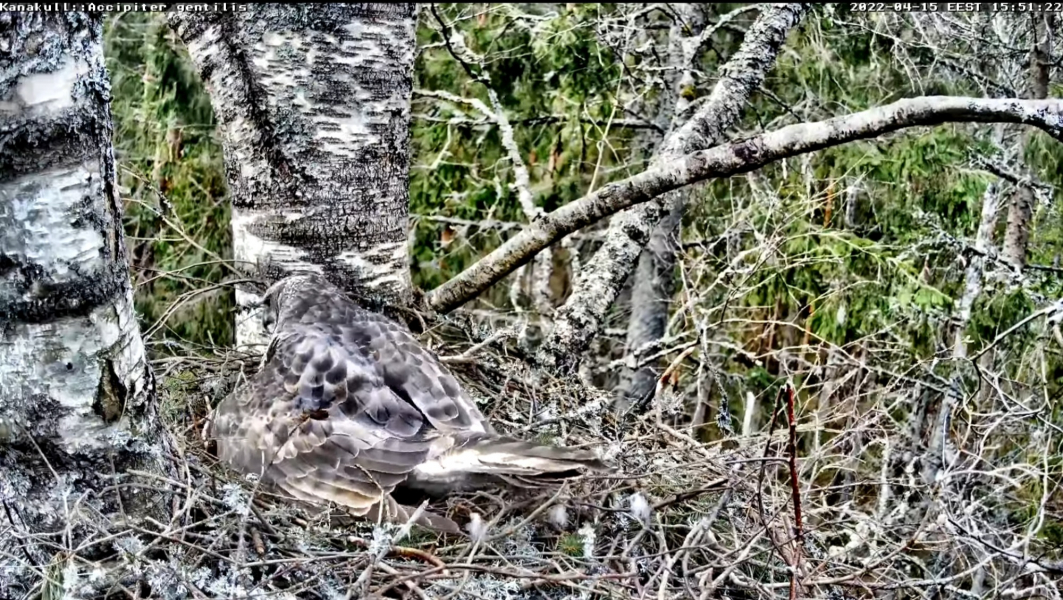 Again under strain.
I remembered that H21 laid similarly intensively last year. This season, however, has laid her eggs quite experienced.
10.52 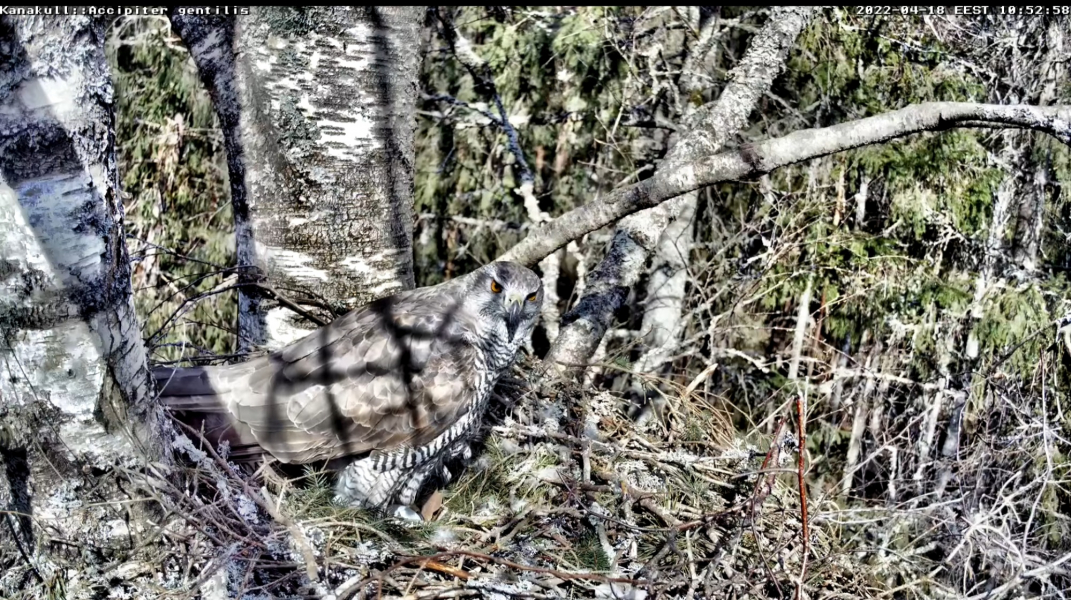 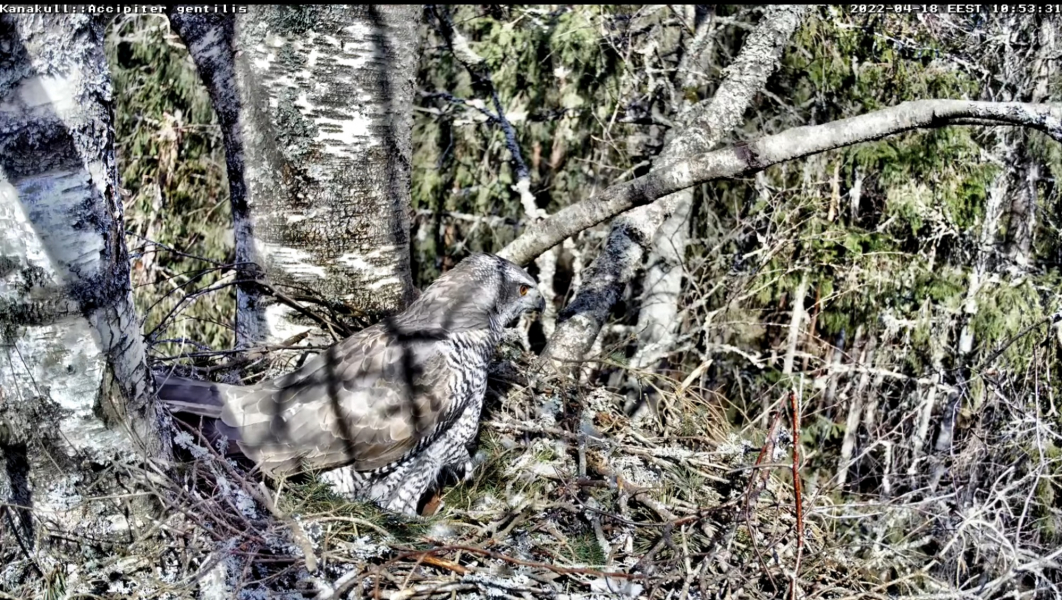 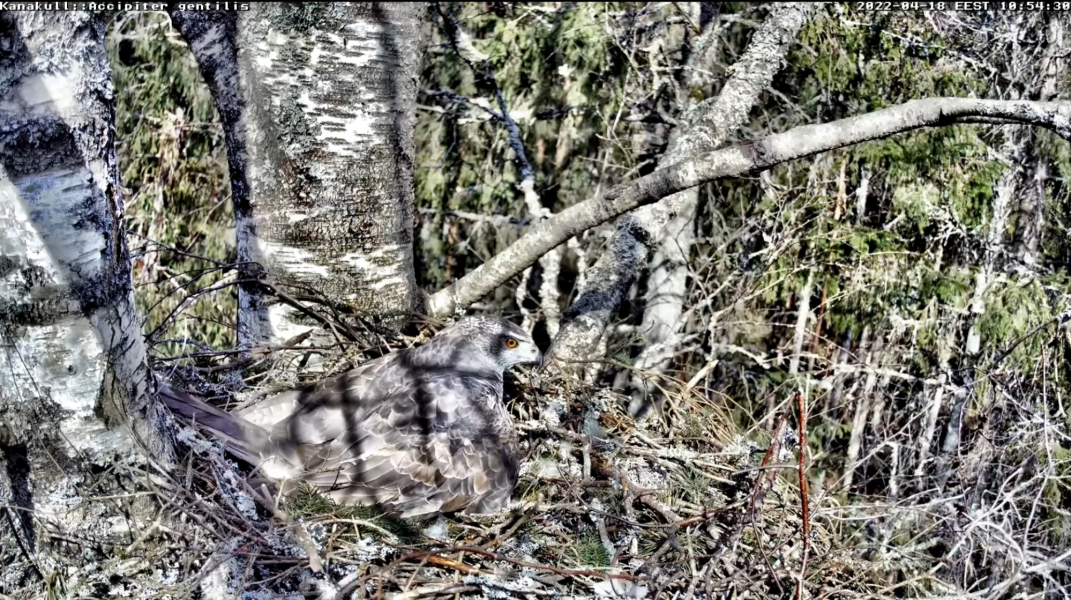 The couple
(they can be loud 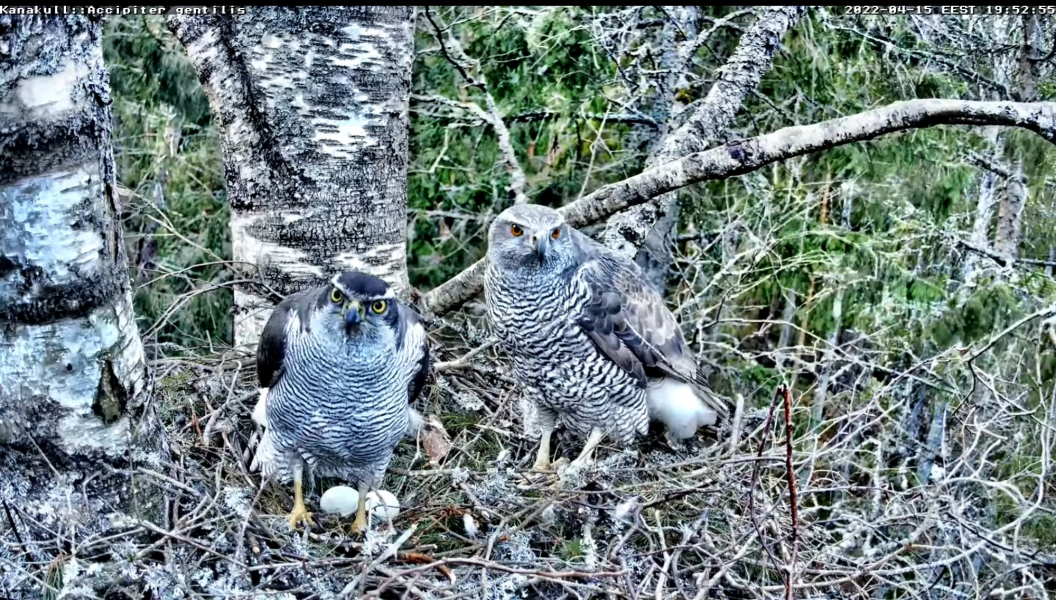 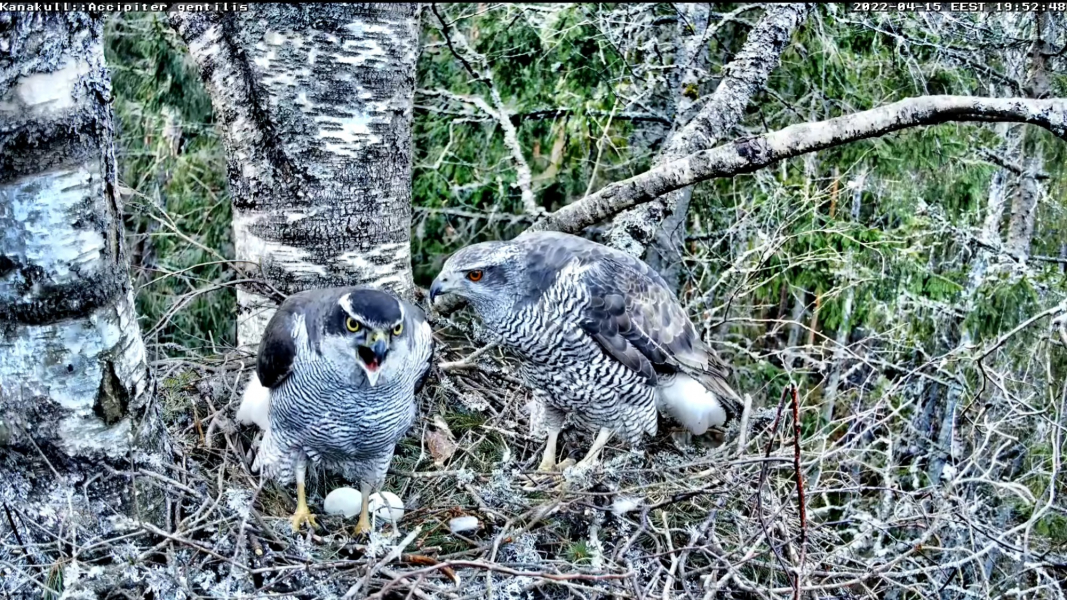 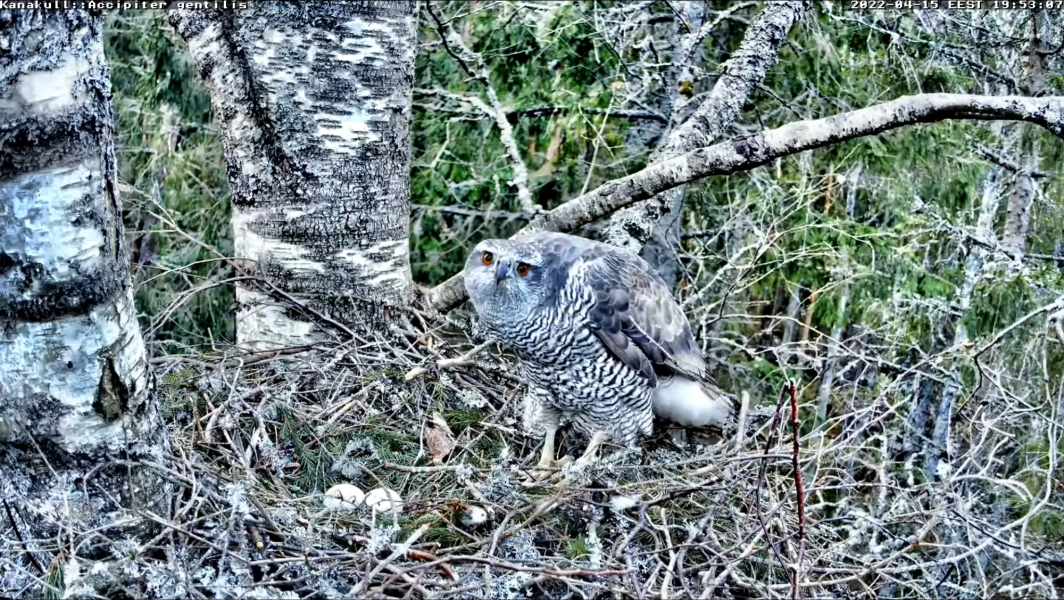 (clearly the development of the plumage from youth to adult) 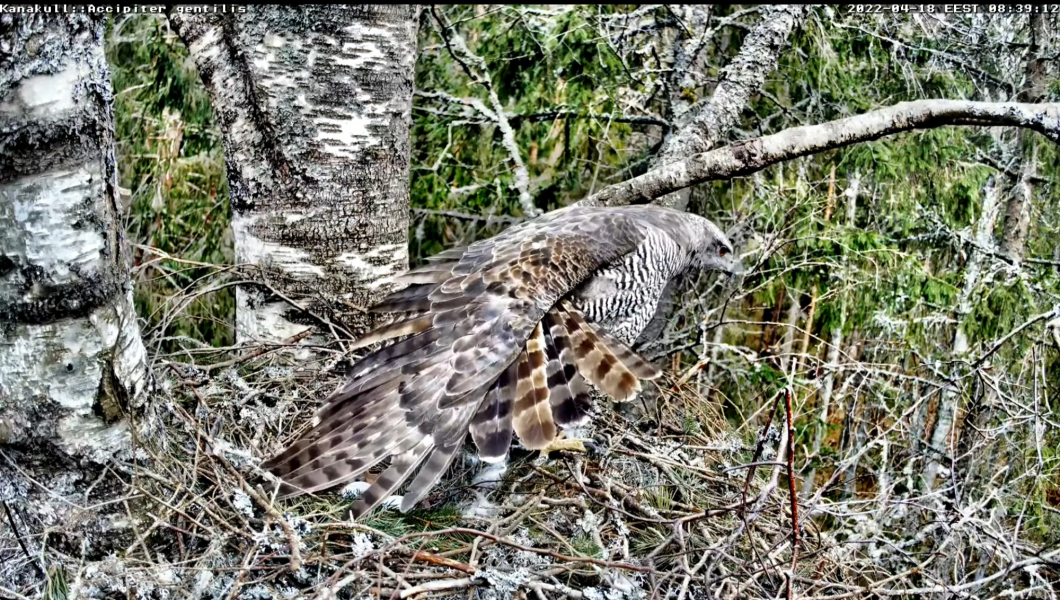 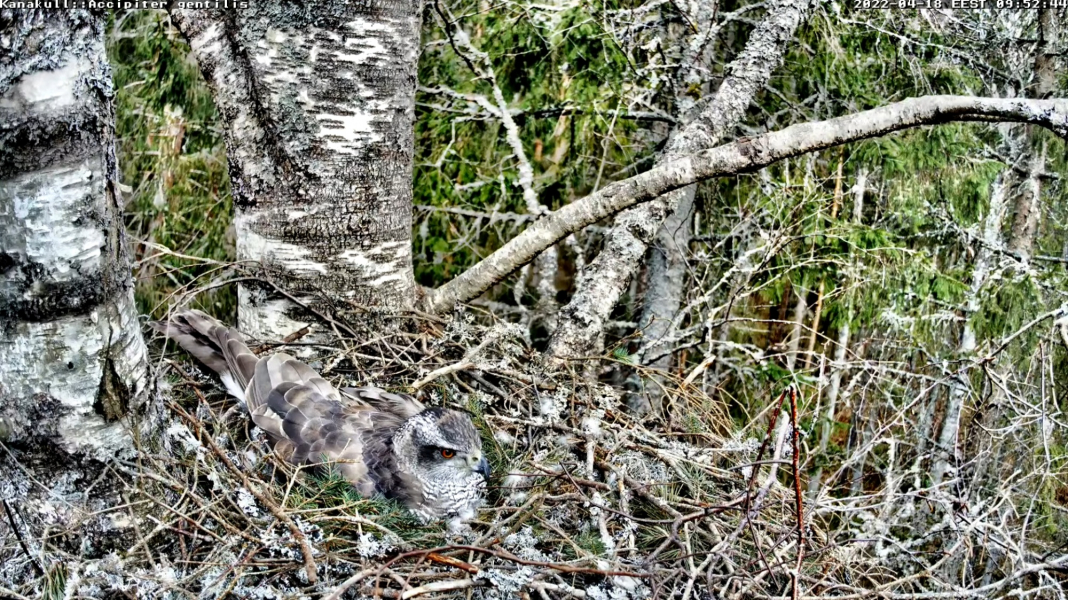 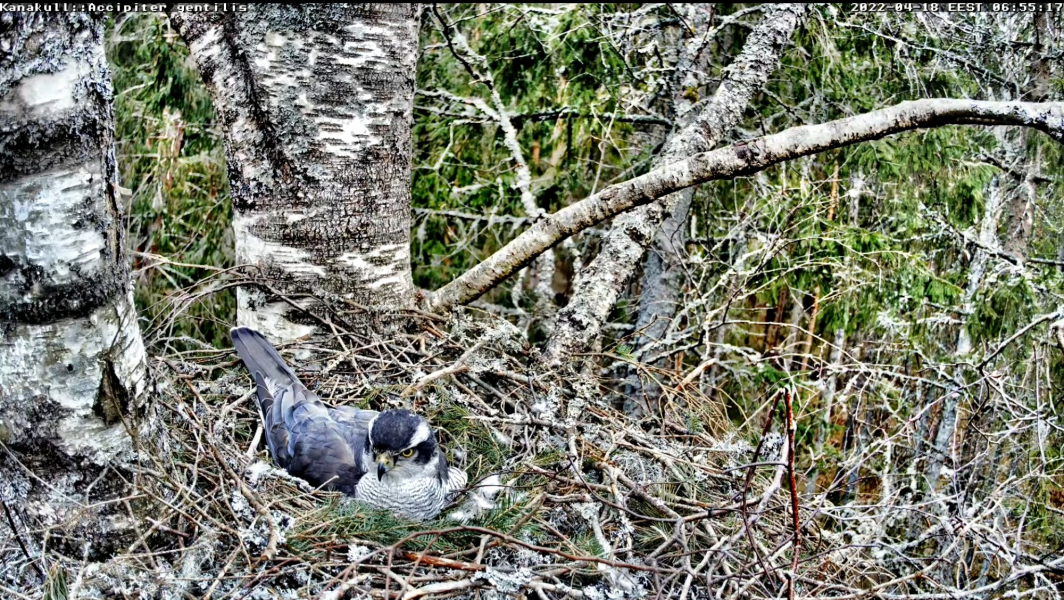 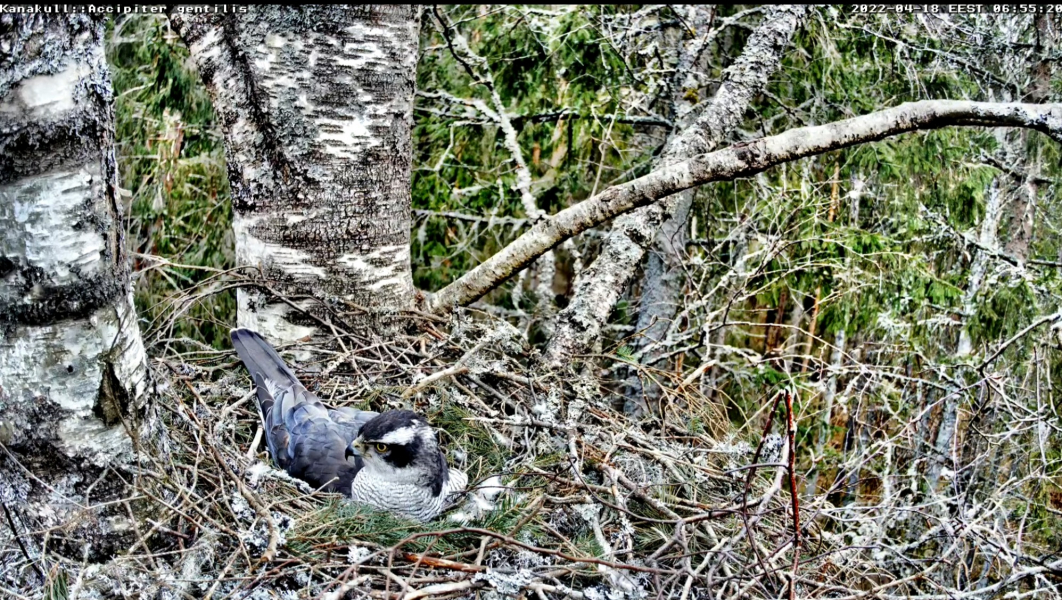 (Although otherwise the contrasting is a bit tiring in general.) 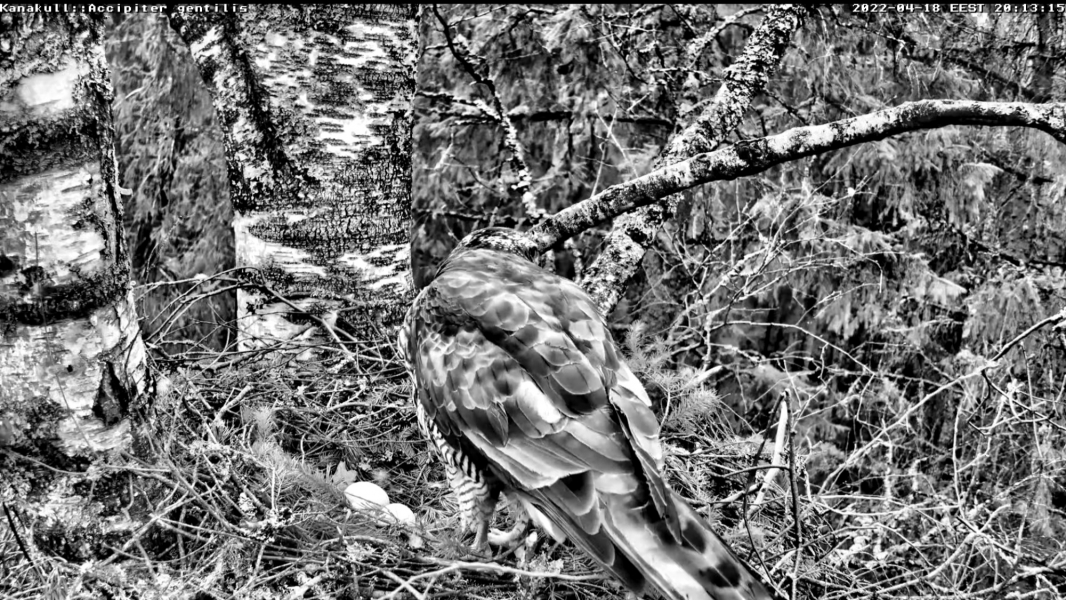 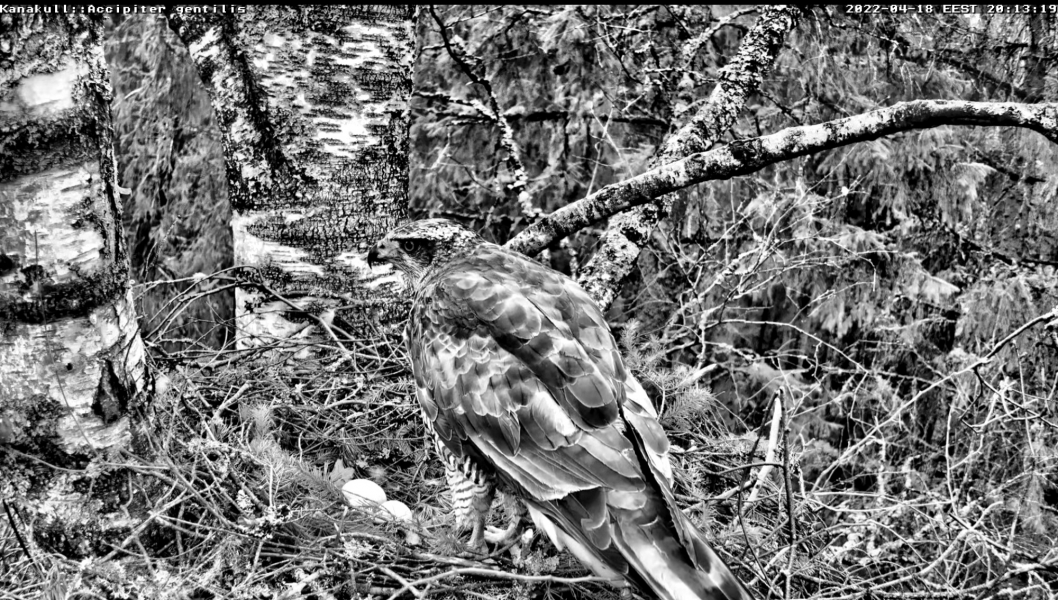 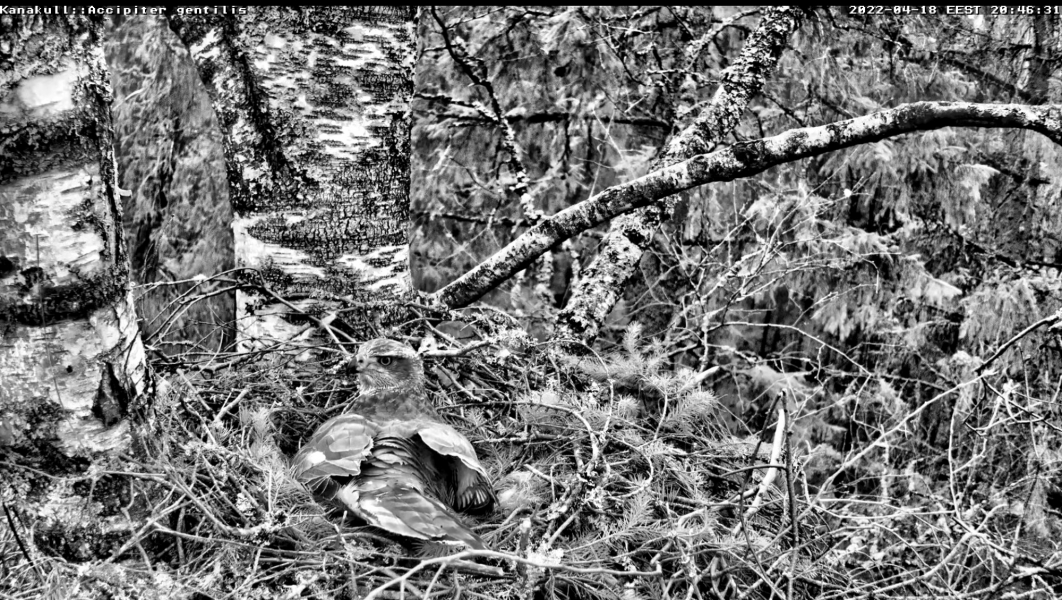 Thanks for the camera and the topic!!!
I'm looking forward to active participation and an enjoyable season. 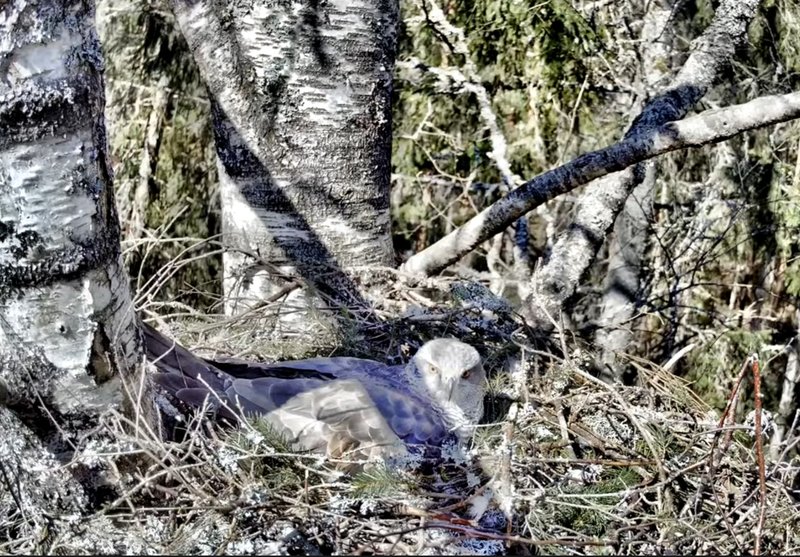 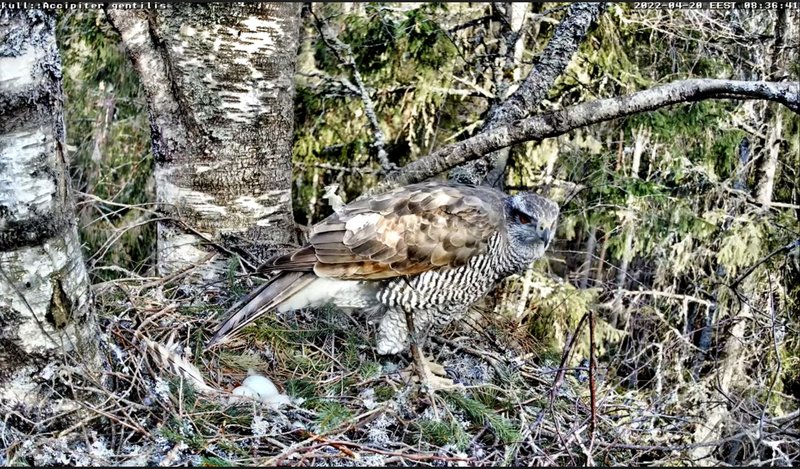 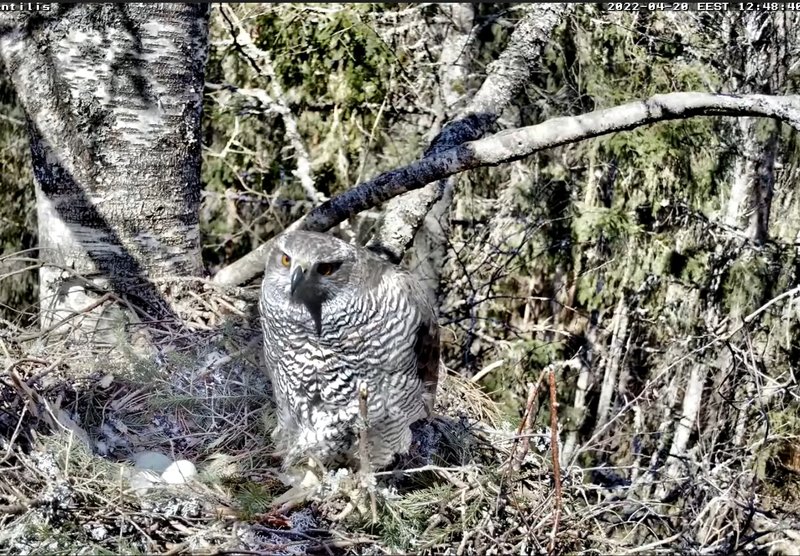 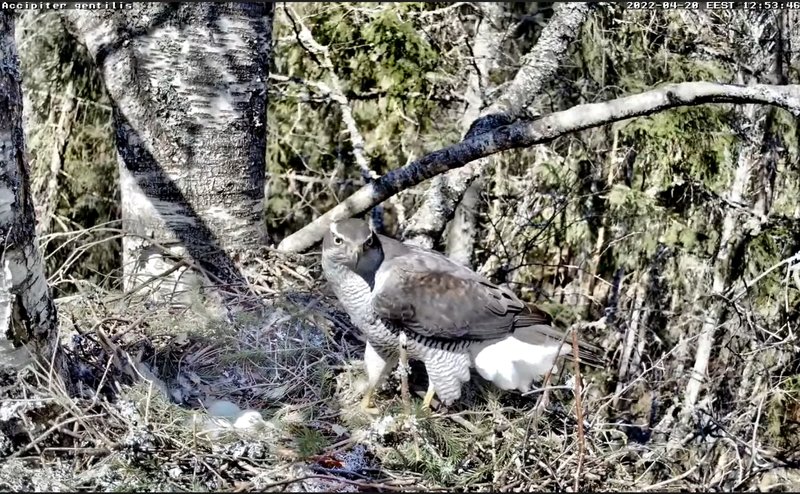 16:39
female comes back with a green spruce twig. 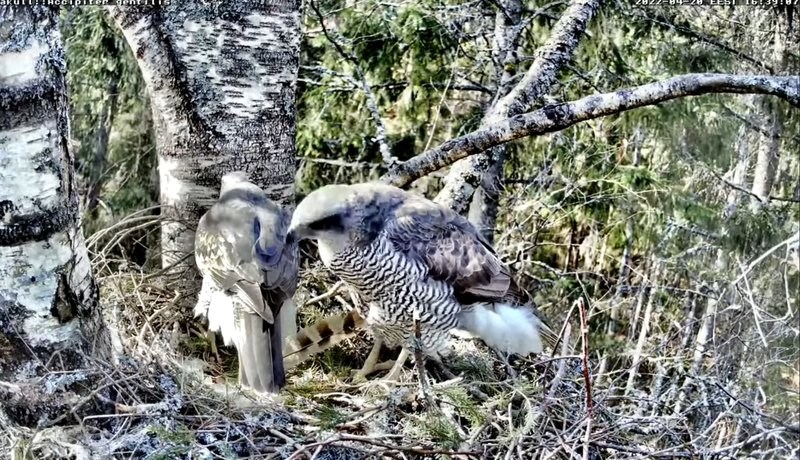 male flies away.
*Only two things are infinite, the universe and human stupidity, and I’m not sure about the former.* Albert Einstein
Top

I too will try to add photos here and (more probably) Youtube videos too.

For now I can only report, recount what I observe, only via text.

But I'll try a.s.a.p. to get some sort of screen capture on my laptop, which I am using now. :)

For now: one of them (the female, I assume) is sitting on the eggs... Will keep an eye on them :)

About me: I volunteered at a bird reserve next to my town for a short while (it was a project but didn't last long) but I don't have any ornithological nor zoological diploma/superior education.

In short, I am an amateur bird-watcher

Nature is for everybody.
Top 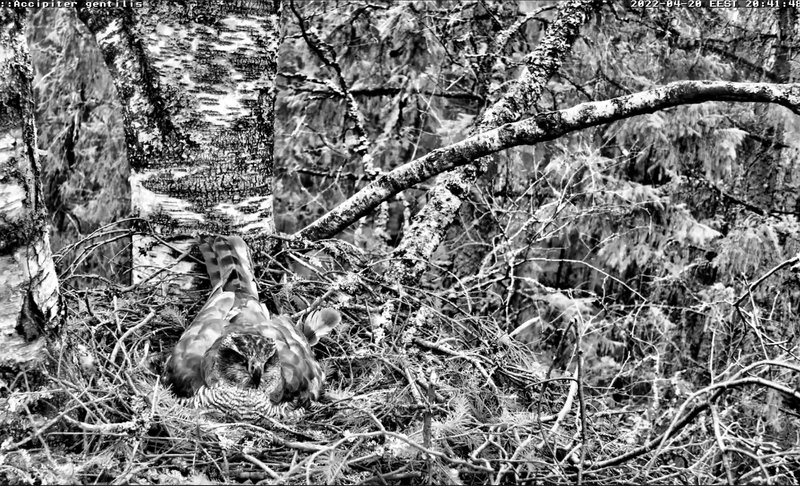 Welcome to the forum andrasiboti

Hi - here some pictures of the hawk and the eggs. Hawk was out for a bit. Nice to see the feather near the eggs, seems that the hawk was there for the safety. Hawk had a new little twig for the nest 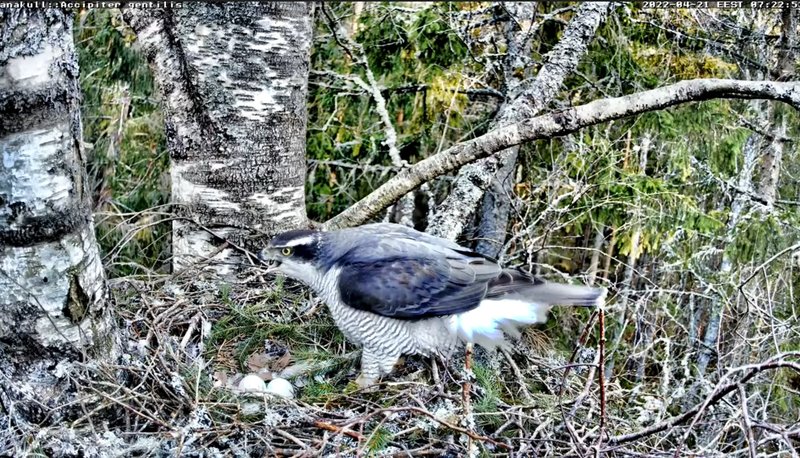 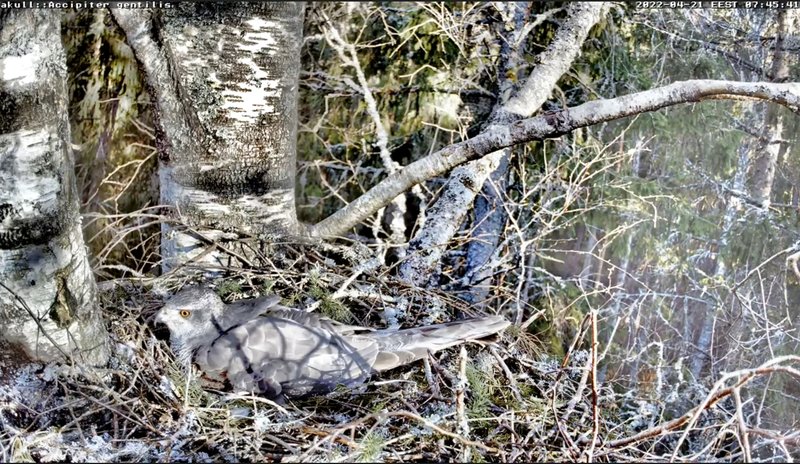 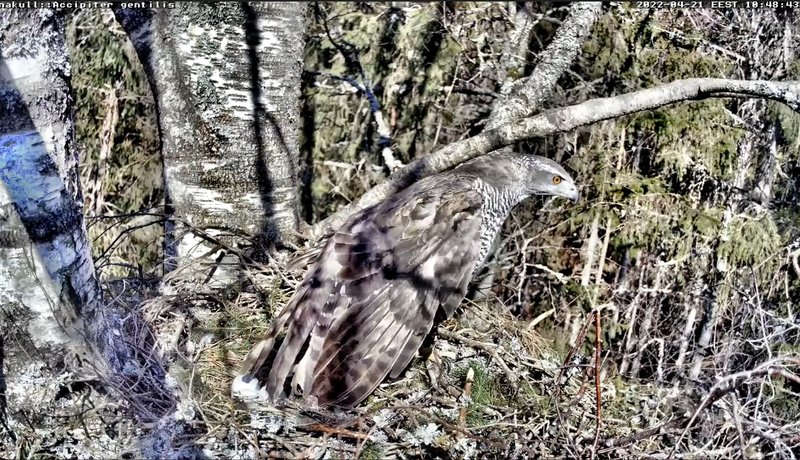 12:17
she comes back with a dry stick.
*Only two things are infinite, the universe and human stupidity, and I’m not sure about the former.* Albert Einstein
Top
Post Reply
243 posts