Solo, thanks for all updates of Polish storks and Mare

I thing CNIG 18 and Chris will remain throughout the second part of the migration in Turkey...
Top 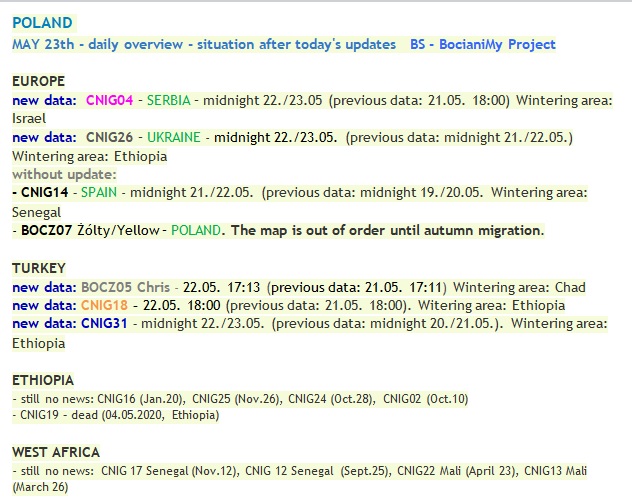 I found this kind of article and image about Mare: 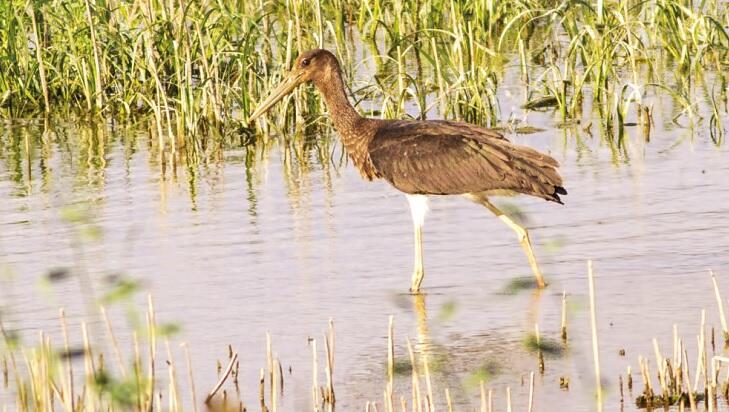 A black stork, whose migration route has been followed since 2016 with a satellite transmitter attached to it, entered Turkey from the eastern province of Hatay 10 days ago.

The stork, which reached Romania via Bulgaria, travels form 15,000 kilometers every year between Africa and Europe.

The life of the endangered species of black stork, named “Mare” by stork observer Maria Marika in Germany, has been followed by satellite transmitters for about four years.

Mare’s spring migration started about a month ago. Stating that Mare is a female black stork, Marika noted that in 2016 a satellite transmitter was installed as part of a research project supported by the Max Planck Ornithological Institute.

Marika said that Mare’s sister, Bille, was also installed a satellite transmitter to understand whether or not siblings in the same nest were traveling together.

“The data clearly shows that these birds are not doing this. During the first five days of their travel, we followed the distance between both birds. On Sept. 4, Mare’s sister was killed by a hunter. Mare’s adventure still continues. Mare also had many babies in this process,” she said.

In the autumn and spring migration periods, Mare migrates from Europe to Africa, from Africa to Europe via Turkey. Mare’s journey in Turkey is being followed by Fikret Can, who is known as the “Stork Father” and the founder of the Leylekel group, and a volunteer Emrah Turan. Mare travels about 15,000 kilometers in every migration period.

Stating that she traveled from South Africa along the Nile Valley and moved from Cairo on March 23, Can said, “For four years, Mare travelled about 15,000 kilometers every year from Africa to Europe in spring and from Europe to Africa in autumn.

After departing from Cairo, she came to Hatay border and entered Turkey about 10 days ago. Staying at 35 points in total, she came to Biga Gümüşçay border on April 1. Mare reached the northeast of Romania from Biga on April 4, following Tekirdağ, Edirne, Bulgaria, over the Marmara Sea, just above the Dardanelles Strait.

The migration journey will continue until Germany. She can travel an average of 300 kilometers per day.”
Top

I know - Ficret Can asked me, but unfortunately they didnt corrected the (big) mistakes

Ficret Can helped me also with search for Oru :-(

btw. that is not Mare (that is one very young stork - without transmitter, without ring)

Mare flew today back to her "nesting area "

in the morning she stayed in the area, localisation after midday is already on her way to south 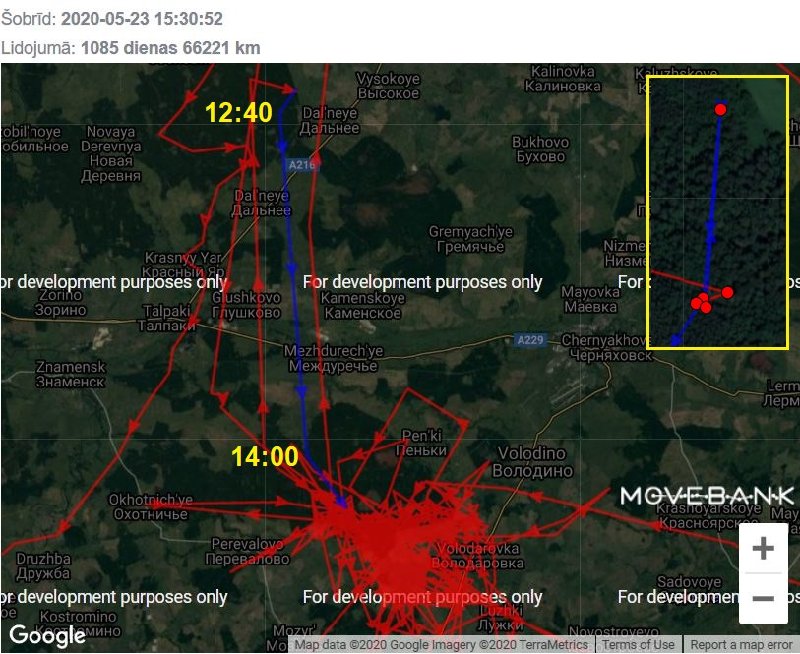 Oh no, sorry! Hopefully a picture of right Mare can be found somewhere!
But it's pity that they put a wrong picture in the article!
Top

How is it with this little cutie CNIG01 nowadays?
How has he/she survived with his/her expeditions?
Is there a fresher picture of him/her?
Top

Treia wrote: ↑
May 23rd, 2020, 10:28 pm
Good evening Hana,
is this bird CNIG01 :
How is it with this little cutie CNIG01 nowadays?
How has he/she survived with his expeditions?
Is there a fresher picture of him? 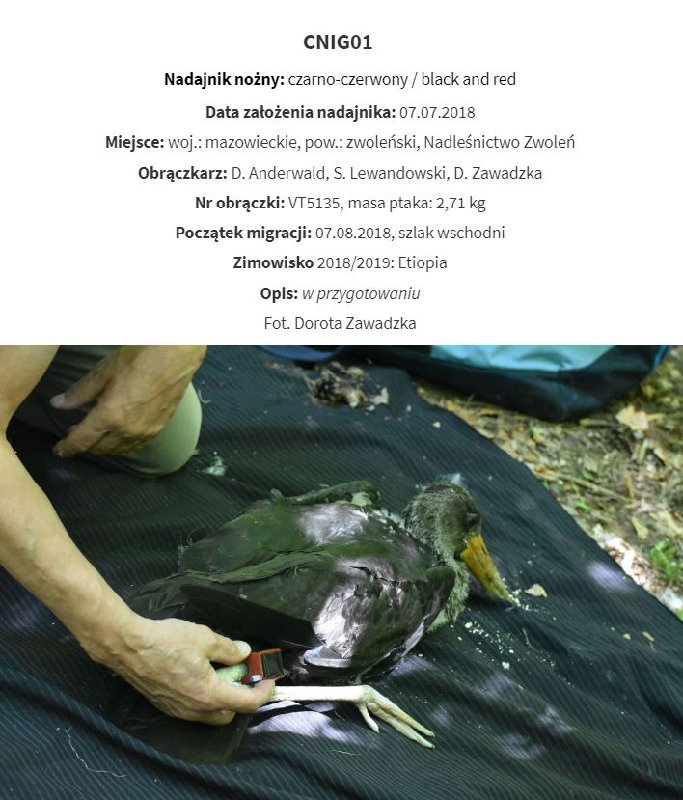 Is this the right Mare ? Thanks Solo ! 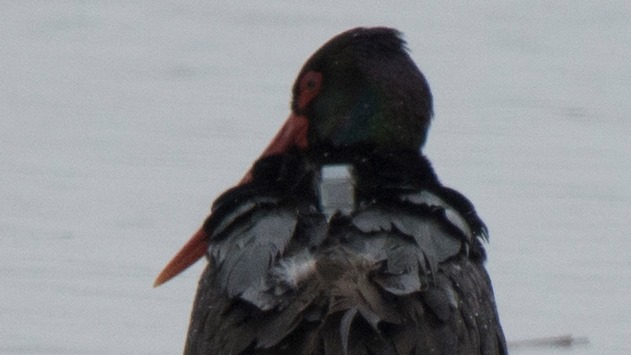 in my contribution you can see also this photo with her ring (0C9X): 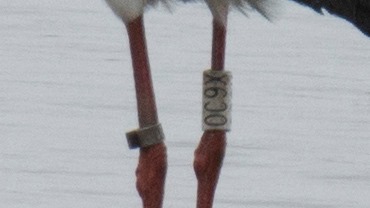 Treia, you are welcome

Solo, thanks for all updates of Polish storks and Mare

I thing CNIG 18 and Chris will remain throughout the second part of the migration in Turkey...

Hana,
You're welcome.
CNIG 18 and CHRIS: we will see - it is only May, the summer is ahead of us

Thank you Hana for overview and all today news

stork is still on the same place near the Akçasu Stream (not far from Bahçe - a rural district and town of Osmaniye Province in the Mediterranean region of Turkey; it is located in the Nur Mountains area)

our stork is in the "green place" most of the time (maybe wet, flooded area near the stream) 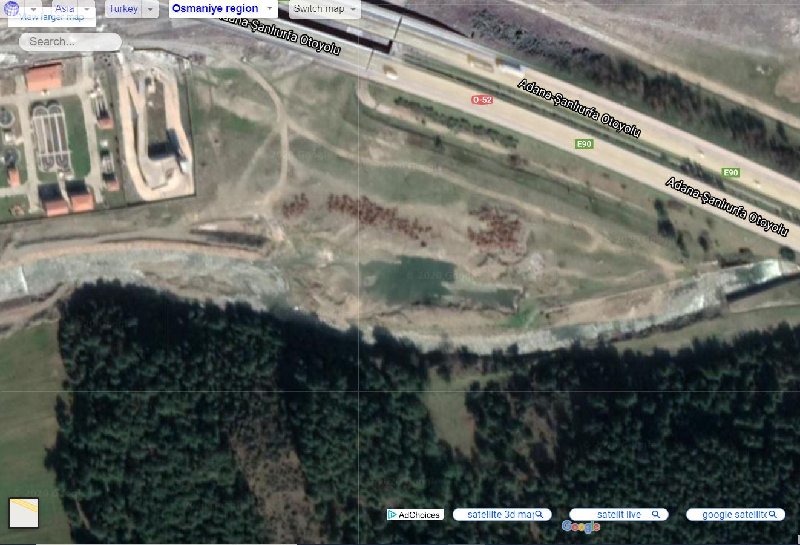 later - Chris is still in the same area, stork flew yesterday also to west and back to his favourite area - DONE
(continuation here: viewtopic.php?p=734887#p734887)

stork is still in the (wider) area near Ciciler - a little village in the District of Osmaneli, Bilecik Province, Turkey

Chris flew moring to its favourite area west from Ciciler and (maybe) after morning feeding continued to NW (localisation near Benli), after half hour the localitation is SW (Bereket) and at 10.12 stork is back in its the southern most area (river Sakaraya)
Chris flew to its northern most area and our stork there spend the rest of the day

the morning line above the highway (localisation at 08.41) is very close to the yesterday place - street view: https://goo.gl/maps/iQer8f8GoAdDxLYo9

the area near Benli (localisation at 09.11) - maybe view to south, to Çerkeşli Pond: 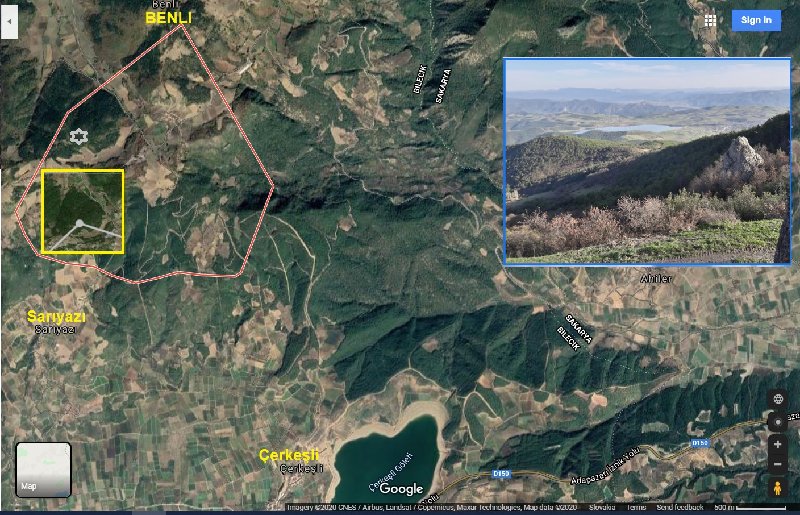 street view (image capture Feb 2015) on its way from Benli to Bereket (localisation at 09.42) https://goo.gl/maps/vmv8Qzoc1pkNGB4m8
Top 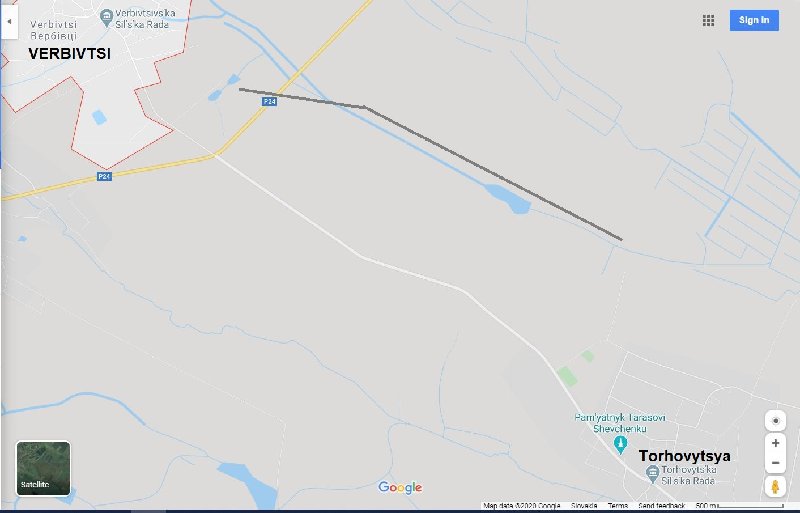 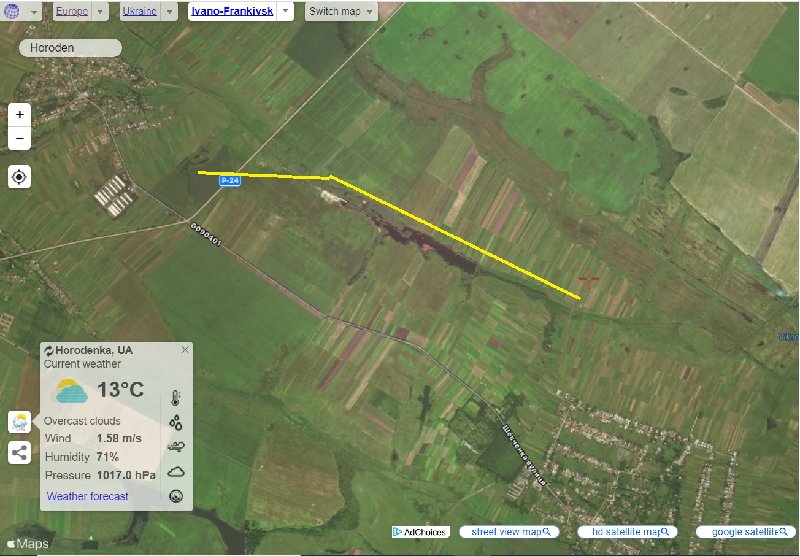 closer view on the building

and the other site

Good morning Treia,
I'm sorry, I wasn't here last night. Thanks Solo for the answer ....
Sadly, the young black storks who received the transmitter in 2018 probably no longer live

POLAND
CNIG04
Serbia - after a morning stop in the field, it headed back to the fish ponds at Svilojevo and then spent the night close to Sonta. 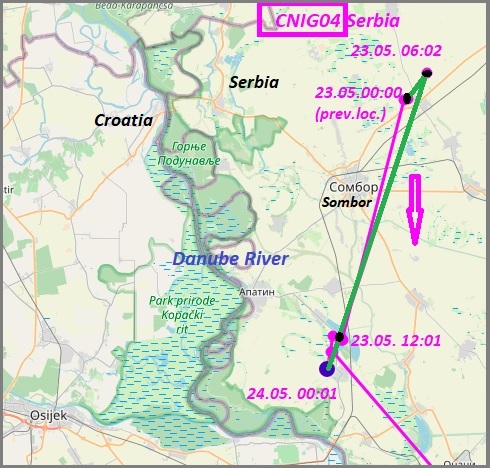 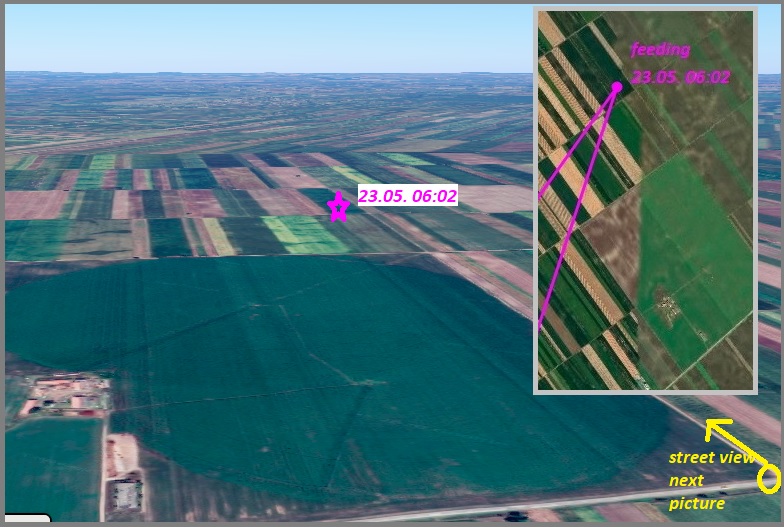 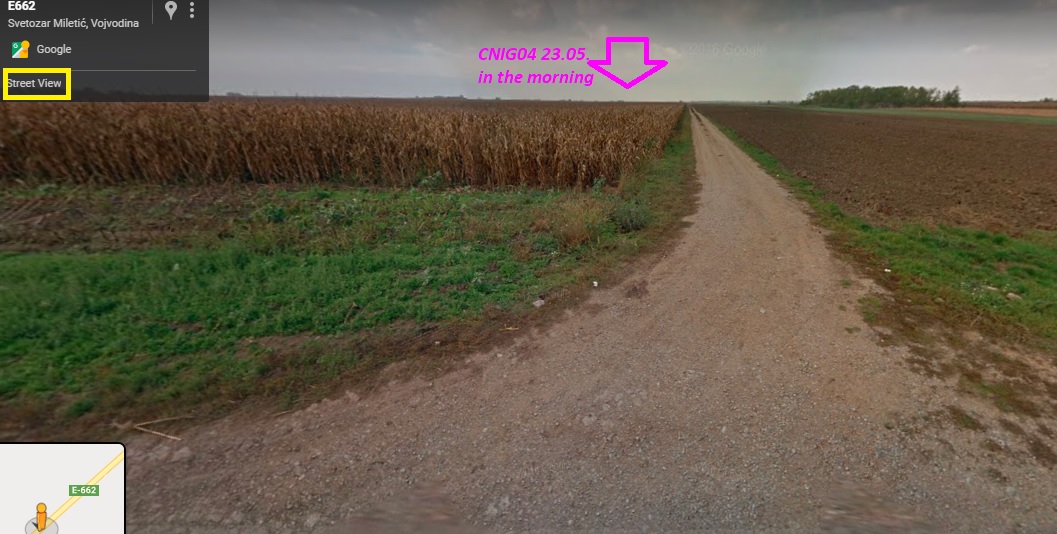 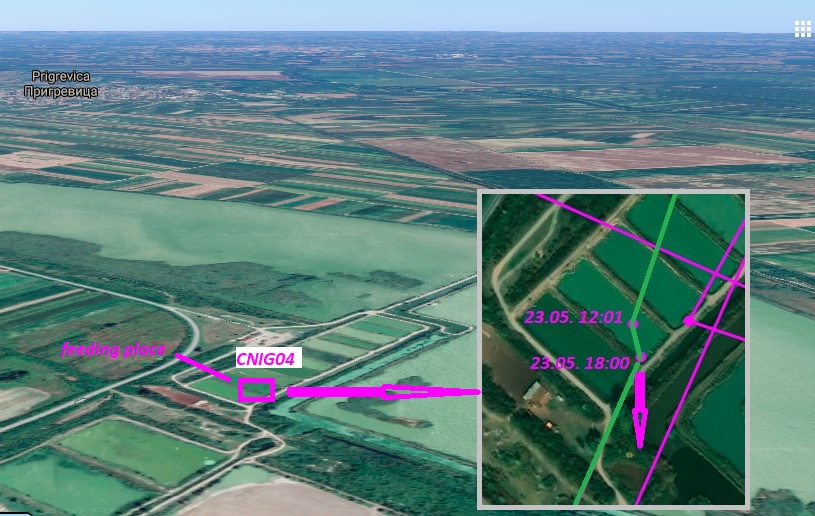 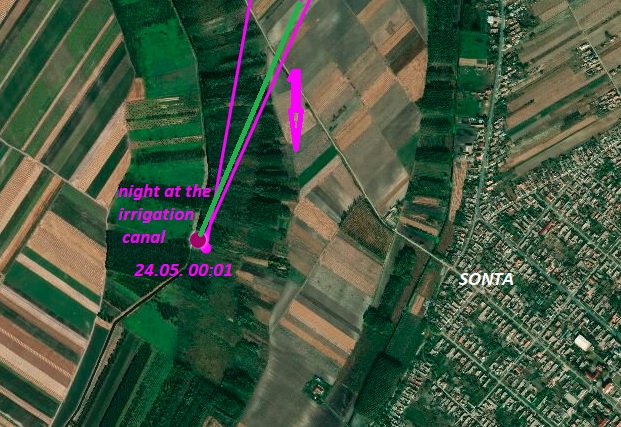