BREAKING NEWS: Maya has laid her third egg this evening sometime around 20:30!

Thank you to those who have given us a heads up! 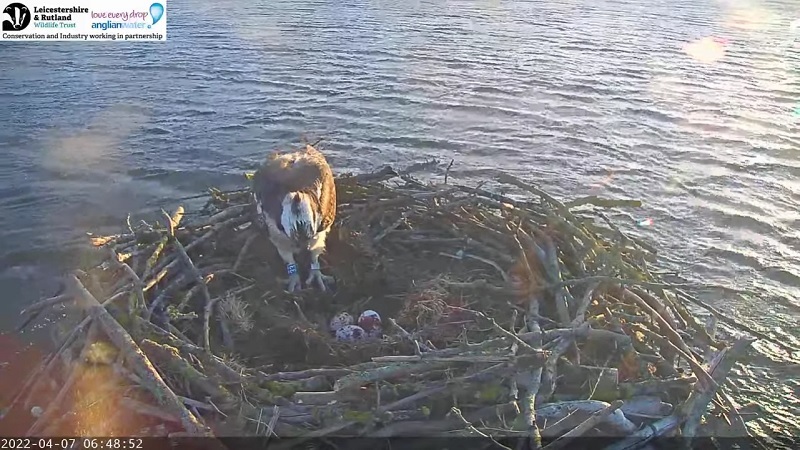 https://www.facebook.com/RutlandOspreyP ... 7337232991
Maya and 33(11) have now been paired up for eight years and will be the seventh year they have bred together!
Maya was first observed in Rutland in 2009 and in 2010 she returned again and paired up with male 5R(04) at the Manton Bay nest and they raised three chicks that first year. Her and 5R bred together for four seasons, but unfortunately 5R failed to return in 2014. During that season, she seemed to pair up with male 28(10) and she did in fact lay eggs, however male 33(11) took over the Manton Bay nest, having successfully outcompeted 28(10) for the territory. By then it was too late in the season for Maya and 33(11) to breed so they bred for the first time in 2015.
Between 2010 and 2013, Maya raised 11 chicks and between 2015 and 2021 she has raised 20 chicks, which means she has raised an incredible 31 chicks in total!

https://www.facebook.com/RutlandOspreyP ... 8030572255
The incubation period for Ospreys is between 35 and 42 days, so the below are the expected dates when we will be looking very closely for signs of hatching at the Manton Bay nest:

In just another 2 weeks we will be eagerly awaiting the arrival of the first chick, which is due to hatch anytime from 5th May

https://www.facebook.com/RutlandOspreyP ... 677393137/
Birds have a remarkable ability to maintain a constant body temperature that allow them to inhabit a wide range of habitats, from temperate to tropical areas. To regulate their body temperatures, birds have adapted to use a variety of techniques to help minimise the energy cost of thermoregulation.
Unlike us, Ospreys and birds have no sweat glands, so one technique that helps cool Ospreys down, and which you can see 33(11) doing here in this clip, is known as gular fluttering. This is described as a rapid vibration of the upper throat and floor of the mouth, which helps excess heat to be lost – a bit like panting you see in dogs.
Top

https://www.facebook.com/RutlandOspreyP ... 014509790/
Both male and female Ospreys have what we know as brood patches, which are small areas of bare skin. These bare patches are in direct contact with the eggs and therefore maximise the amount of heat transferred from the adult to the egg.
During incubation the adult Osprey will 'roll' the eggs, like you can see 33(11) doing in this clip, to allow an even transfer of heat.

https://www.facebook.com/RutlandOspreyP ... 6908664700
A lot of people are asking how we tell Maya and 33(11) apart if their legs aren't visible and there are a couple of distinguishing features between the two birds...

Maya is heavily marked with brown colouring on her chest, which is also one of the ways to tell between female and male Ospreys.

33(11) is predominantly white on his chest, with little brown speckling.

Maya has a distinctive brown 'x' on the back of her head. 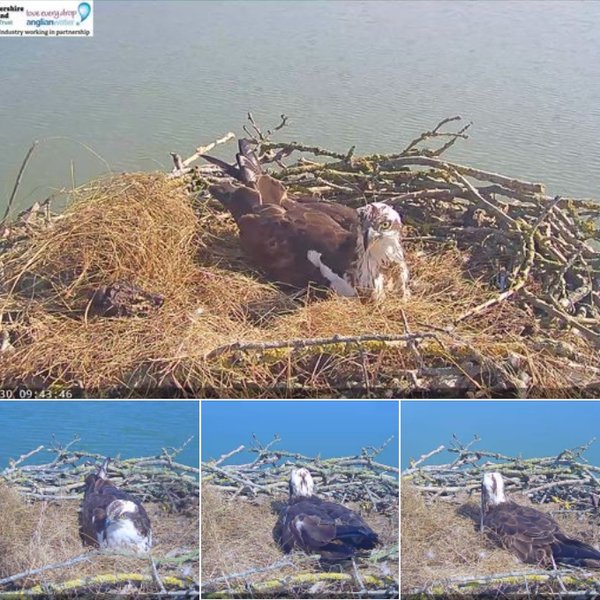 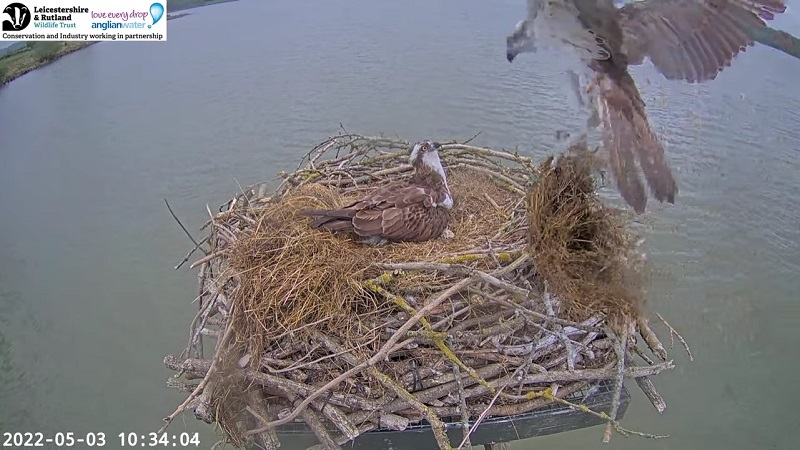 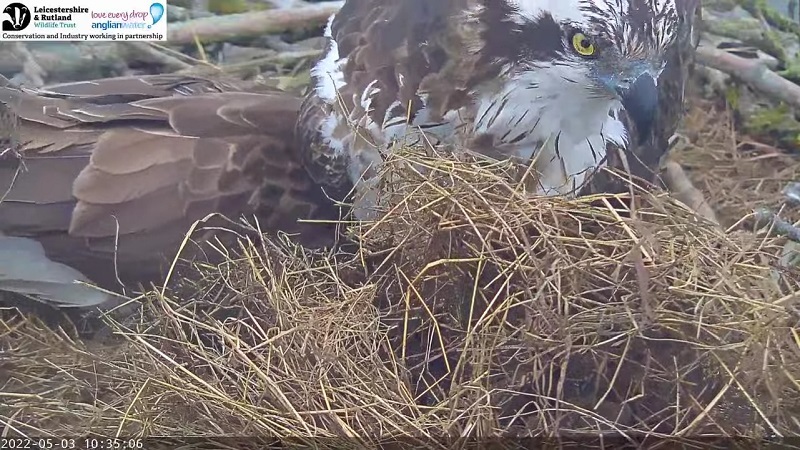 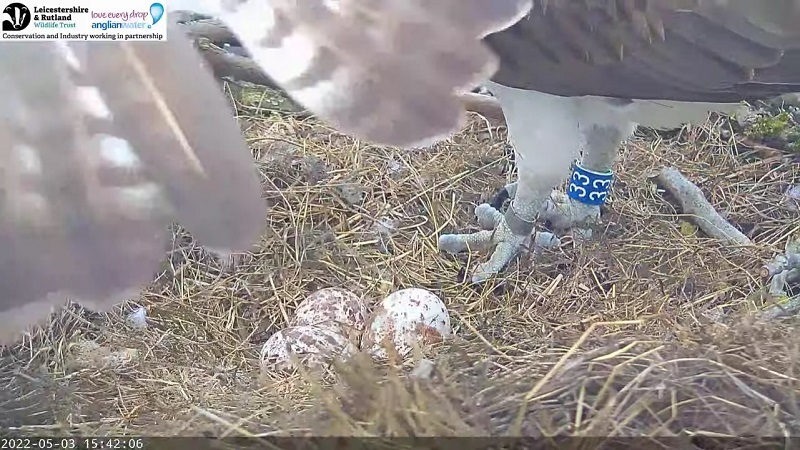 https://www.facebook.com/RutlandOspreyP ... 2485325809
We are just one day away from the earliest we can expect the first egg to hatch!! Keep your eyes peeled on the webcam for any signs of the first crack

As a reminder, here are the expected hatching dates: 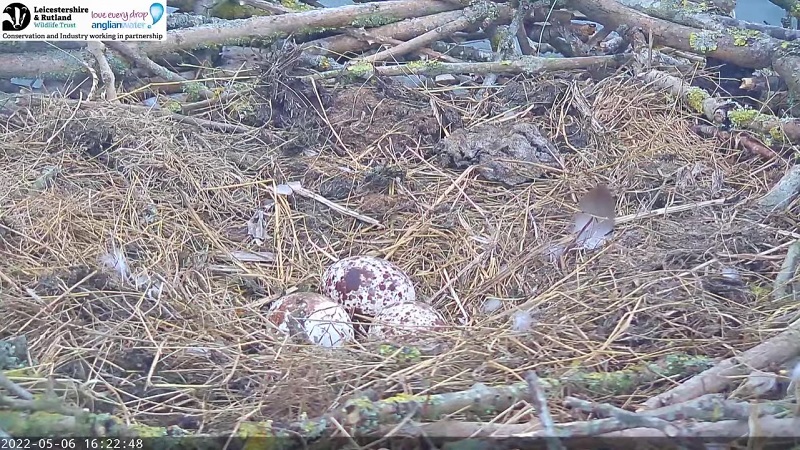 After spotting a crack in one of the eggs yesterday afternoon, the first chick hatched last night (Monday 9th May) at approximately 22:45!!!

https://www.facebook.com/RutlandOspreyP ... 535398281/
There's no wasting time, as the second egg has a crack in it, so we may have the second chick by the end of the day! 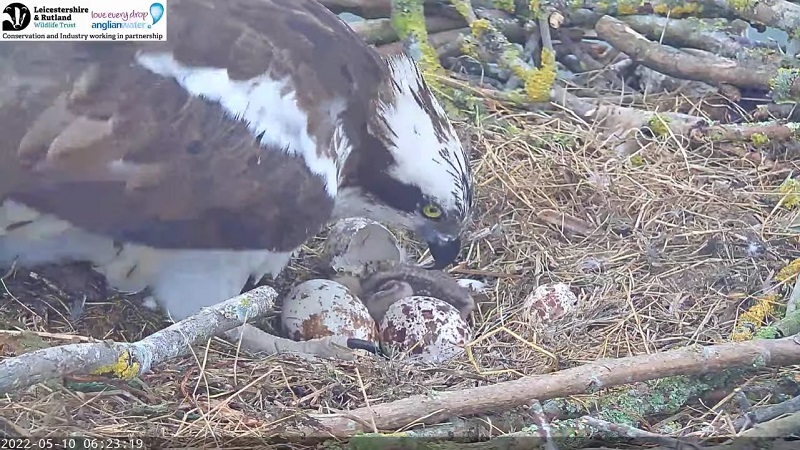 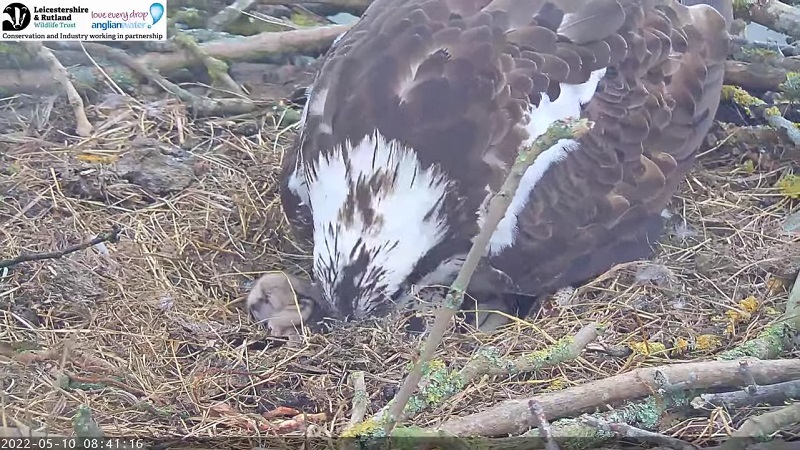 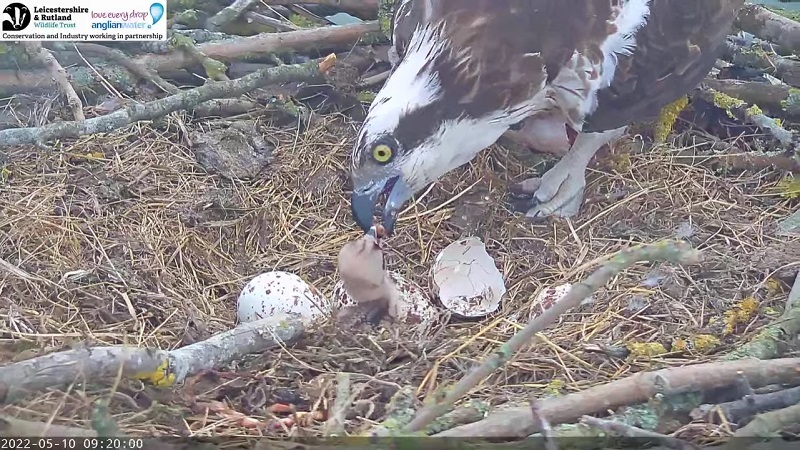 The second chick has hatched at approximately 12:00 this afternoon!

Also, we will be featuring on BBC East Midlands Today this evening, so do tune in if you can. 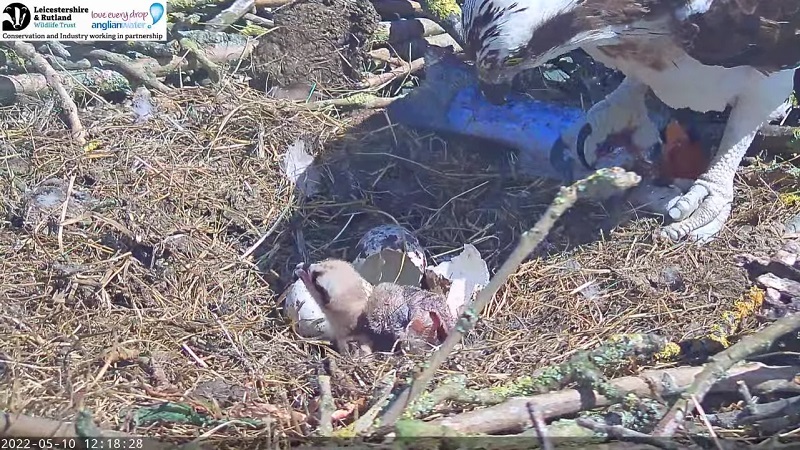 https://www.facebook.com/RutlandOspreyP ... 215658489/
To end the day on a more positive outlook, Maya has just fed both chicks, including the one that was left exposed. We aren't out of the woods yet, but it is certainly encouraging!
Top

Well, what a 24 hours we have had! We are happy to report that the chick that was left exposed yesterday is a little trooper and is feeding well. The even more exciting news we have to share is that the third chick has hatched this morning at 9:30!
Thank you for all your support these last couple of days! 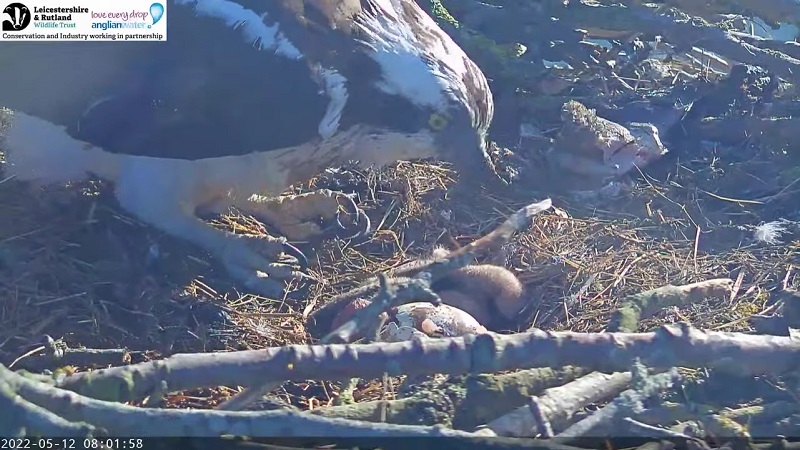 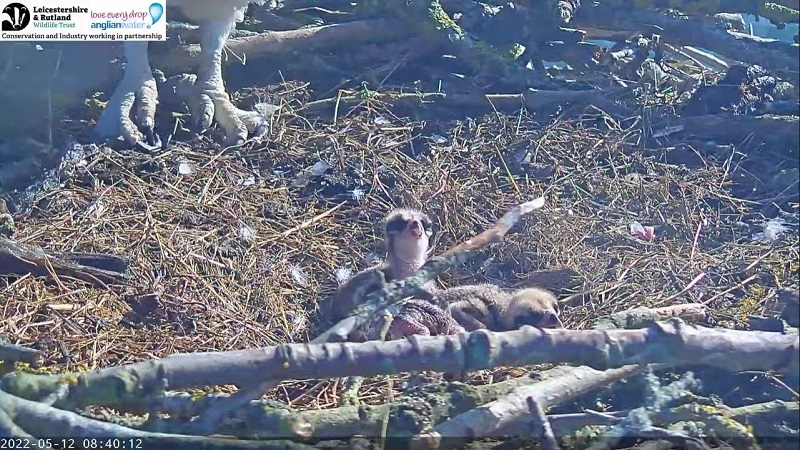 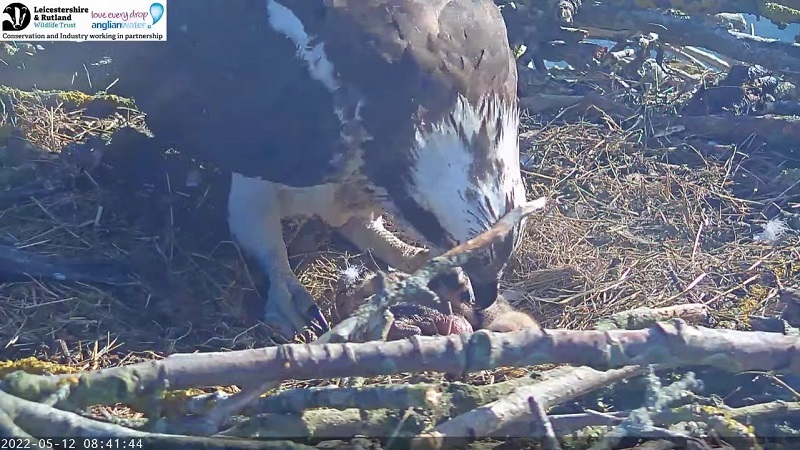 Well, what a 24 hours we have had! We are happy to report that the chick that was left exposed yesterday is a little trooper and is feeding well. The even more exciting news we have to share is that the third chick has hatched this morning at 9:30!
Thank you for all your support these last couple of days!
...

that was hard to watch yesterday... but that ends well, all's well 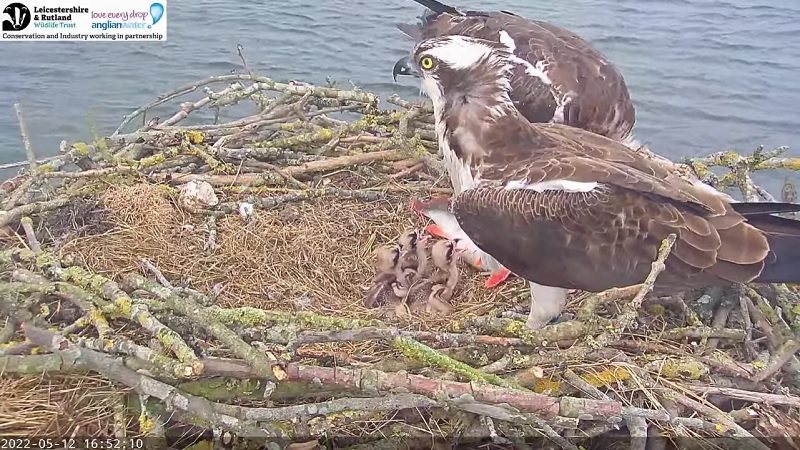 https://www.facebook.com/RutlandOspreyP ... 986425980/
All three chicks are doing well and are getting plenty of food to eat! 33(11) is doubtlessly bringing enough fish back for the whole family and Maya is feeding all three chicks! 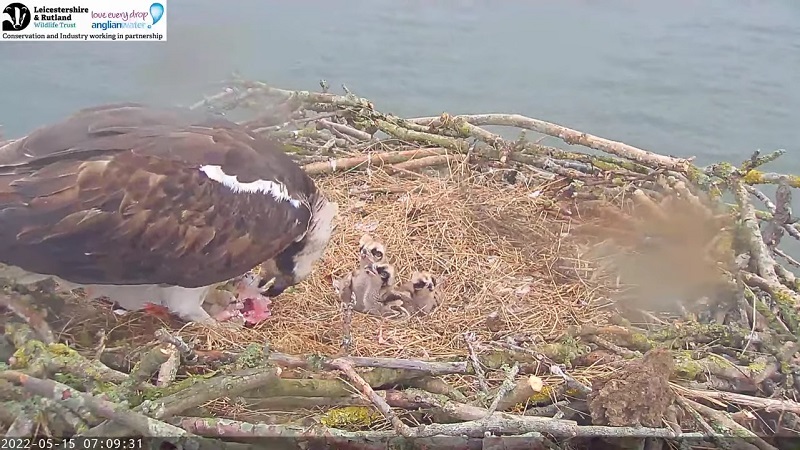 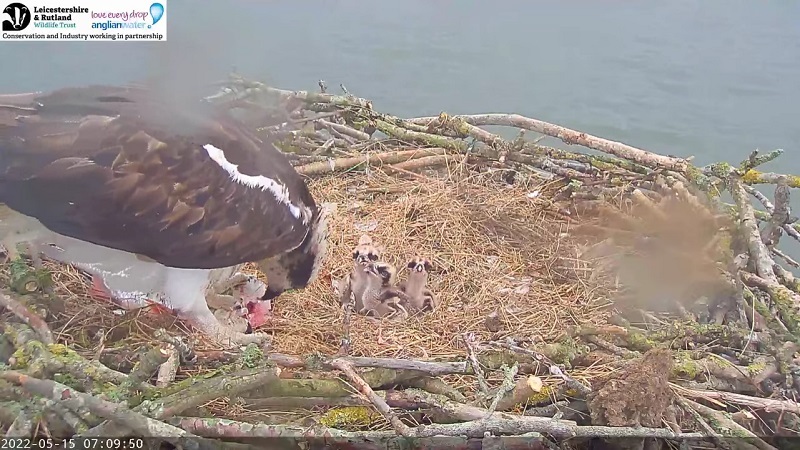 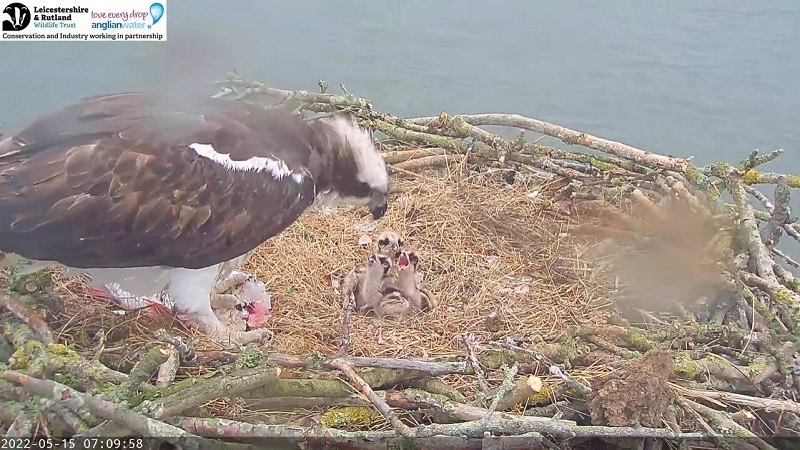 https://www.facebook.com/RutlandOspreyP ... 0937472630
With all the events of last week, the latest blog update has been published 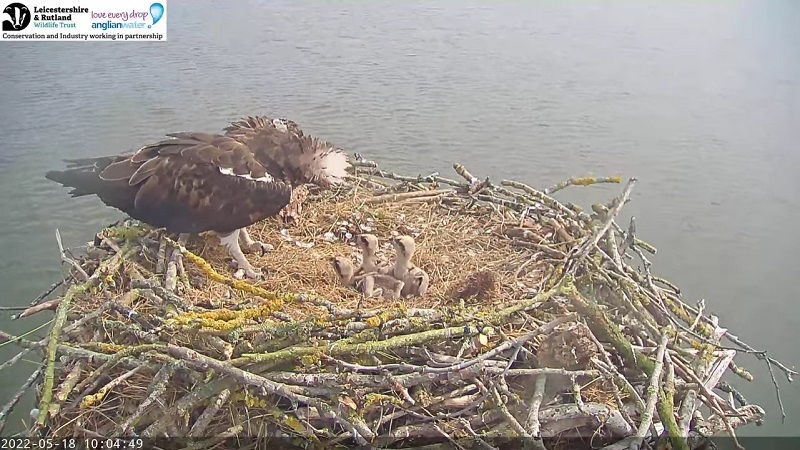 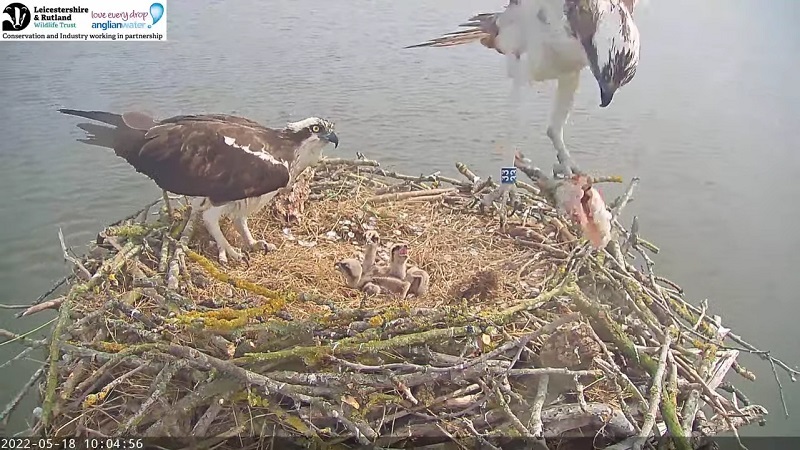 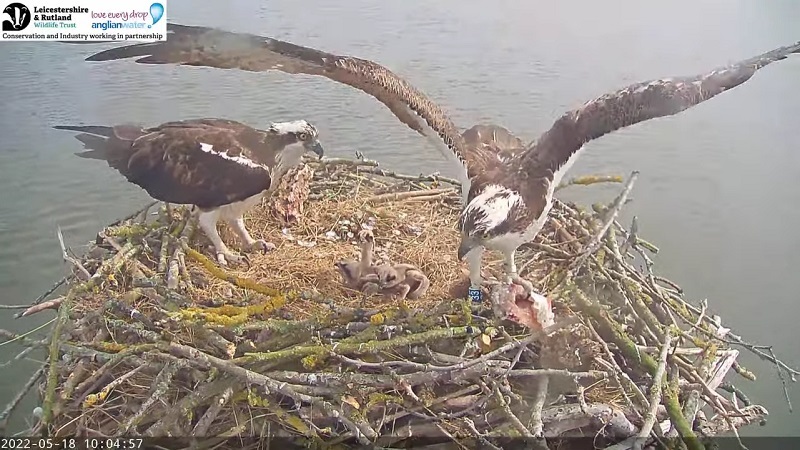 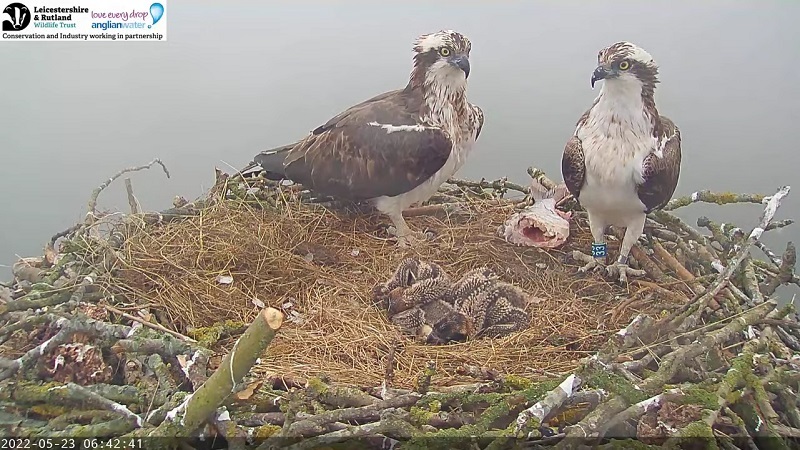 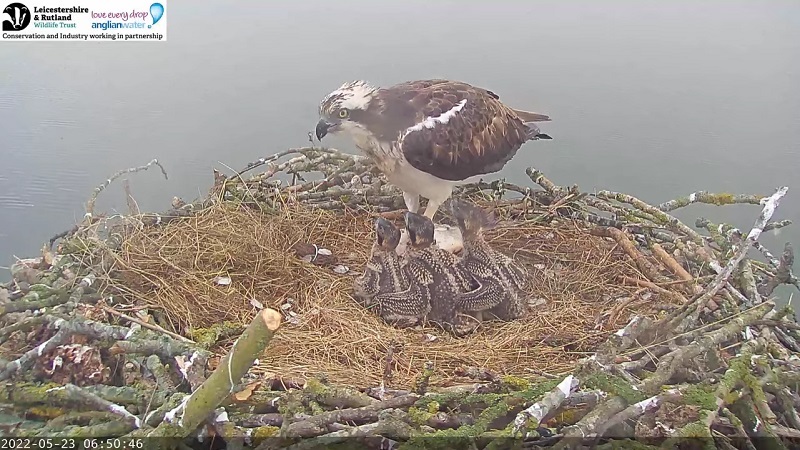 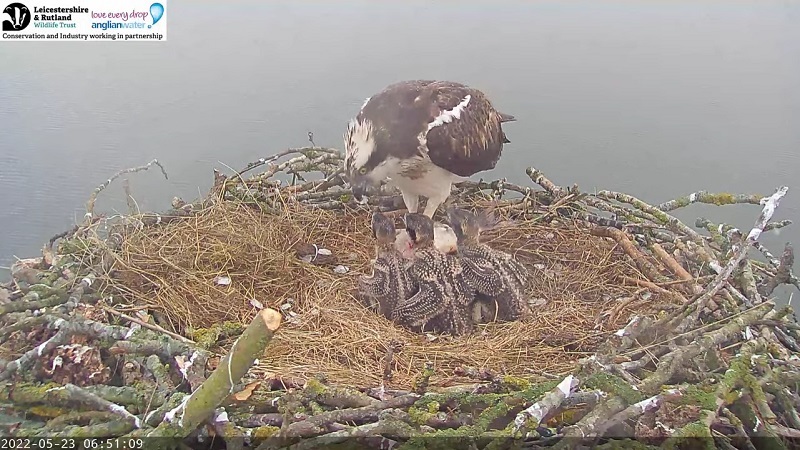 https://www.facebook.com/RutlandOspreyP ... 525055075/
We have had several unidentified intruding Ospreys paying a visit to Manton Bay recently, and one of the ways we can tell that just by watching the webcam is by looking at the behaviour of Maya and/or 33(11).
You will sometimes see Maya and 33(11) "shaking" their wings and this is what is known as mantling - an indicator that there is an intruder in close proximity.

33(11) is multi-tasking in this clip by delivering a Trout to Maya and the three healthy chicks, as well as mantling! 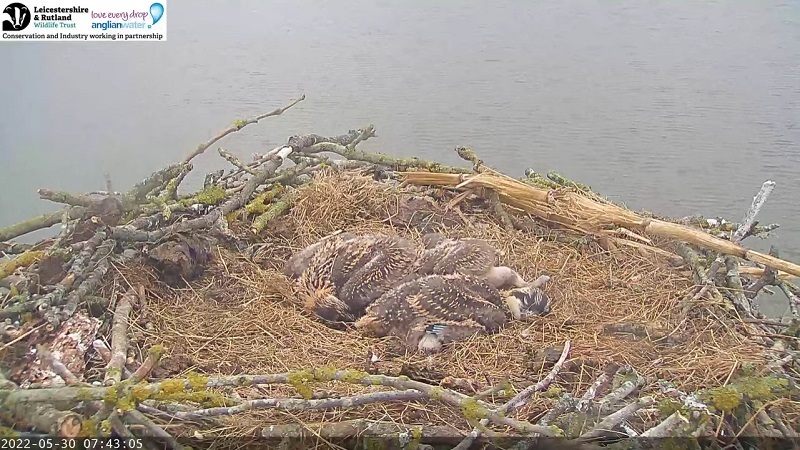 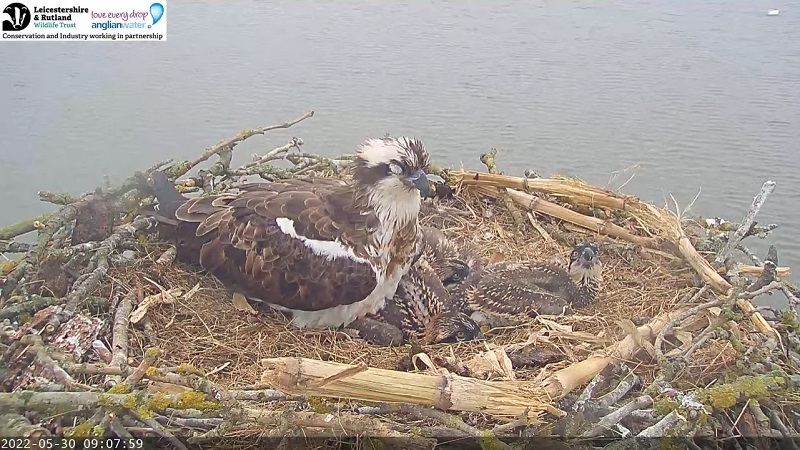