a new season for Latvian black storks is beginning.

the live camera runs in Youtube, presently in this address:
https://www.youtube.com/watch?v=A1dh3Am4SZw

please let me know if the address changes as it sometimes does.

Google translation from Latvian (modified by ame) of the information given in the youtube page:

The nest is located in Sigulda region. The camera was initially installed in 2018. The nest was found two years before the camera was placed. The nesting area is known for a very long time. The previous nest was known at least since 1982 and was used until 2005 when it was devastated by a pine marten.

The nest is a very typical black stork's nest - the pine branch is 1.8 m from the trunk, but a little unusual is that it is already in the middle of the surrounding tree crowns - about 18 meters high, not hidden under the crowns. It is also uncommon for this nest is the position the camera sensor as it is not on the tree trunk but on the branch behind the nest. This is to avoid the sun shining in the camera all day - the nest branch is directed almost precisely to the South. The nest is located in an old boreal forest with 150-200 years of pine trees and spruce trees. Therefore, it is possible that the camera's eye or sound will also catch a species of owl and husk.

The first season for which researchers have full information is 2017, when four storklets hatched, but three grew. To feed the fourth, the parents apparently lacked food because the bird died already in the nest. There is no news about the impact of carnivores, because there was an automatic camera at the nest until its removal. The last young bird left the nest on September 6th. Both adult birds were without rings.

In 2018, nesting was successful. The first black stork female arrived in the nest on April 5th and the first male on April 7th, but after a few days they were driven away by another stork couple. Both adult birds were without rings. From April 12, five eggs were laid, four of which hatched (May 18-20). All four storklets successfully fledged and were last seen in the nest on August 8-10.

In 2019, the camera system was installed on March 24 with the participation of Jānis Ķuze, Jānis Rudzītis and Māris Strazds. Special thanks to Arborist Edward Ozolin for helping with the camera sensor and microphone. You can comment on what's happening in the nest in the Dabasdati.lv forum in Latvian (https://forums.dabasdati.lv) and in the Looduskalender.ee forum in English (https://www.looduskalender.ee/forum/).

Sigulda is a town in the Vidzeme Region of Latvia, 53 kilometres (33 miles) from the capital city Riga. It is located in the valley of Gauja river in Gauja National park. It is not said anywhere that the nest is inside the Gauja National park, but Sigulde and Gauja Np cannot be very far from it. 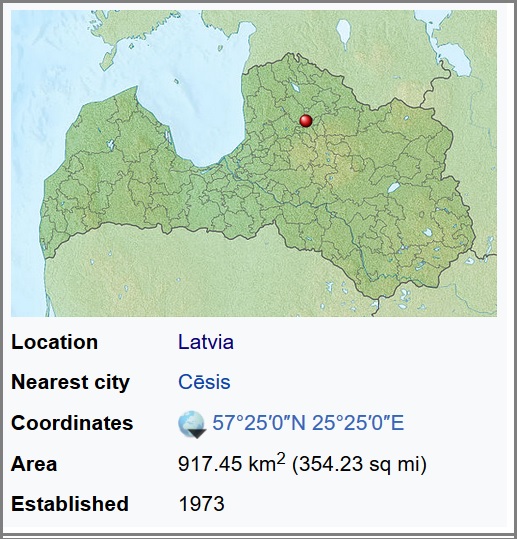 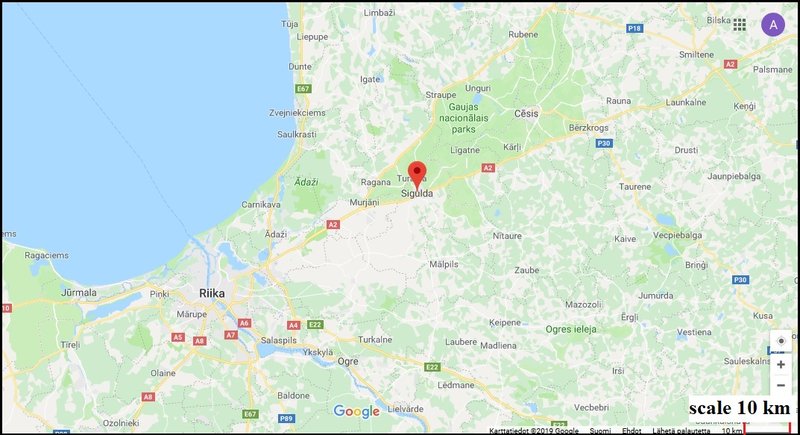 i found something strange in this map: a place called Ykskylä on the river Daugava that runs to Riga, between Salaspils and Ogre. Ykskylä is plain Finnish: "one village".
Top

i'll copy here the posts that were made in the end of the previous topic.

if one of you have some information of the nest that you think should be given here in the beginning of the topic please write to me.
Top

this post does not concern this particular nest of this topic but i think i'll keep it here anyway. it has some interesting information on Latvia's black storks.
(sorry Liz & Michi 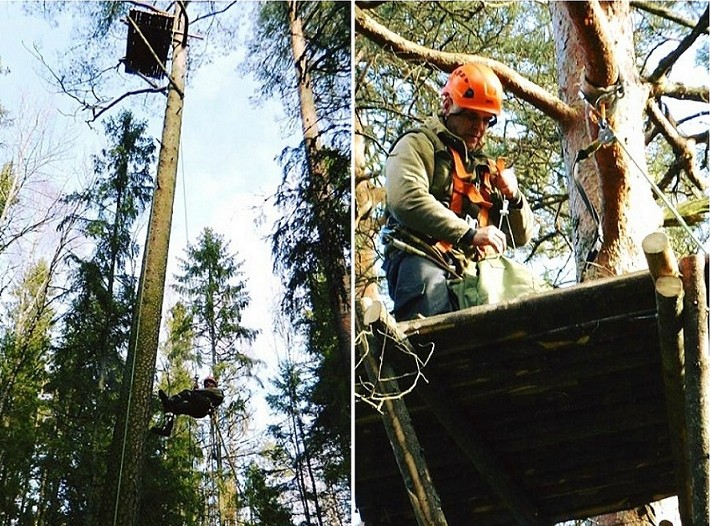 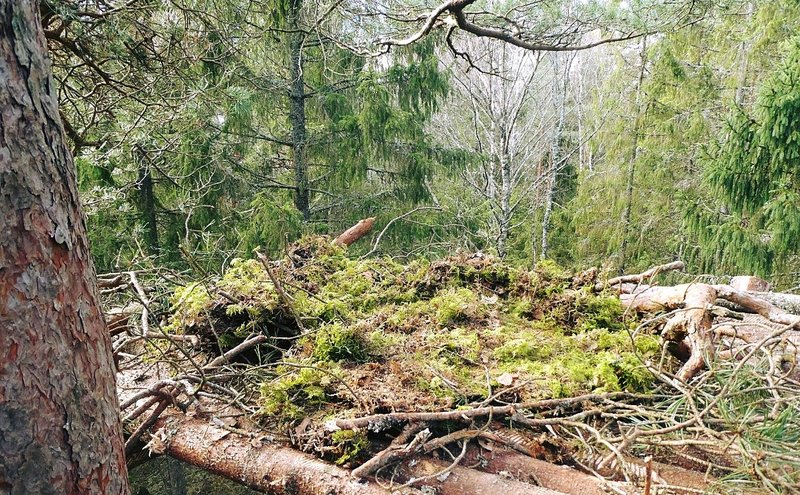 “During the monitoring of black stork in the territories of JSC“ Latvian State Forests ”, we found that one of the longest black stork nests in the Rendas forest district of the South Kurzeme region has fallen upon the removal of the support branch. In order to promote the nesting of the stork in the established micro-reserve, at the beginning of March we went to the nesting area with our colleagues and built an artificial nest. Our experience shows that restoring as soon as possible the fallen nest in the same tree gives good results - the stork usually accepts new homes and successfully nest. ”

Black stork nests select the thickest trees of adult forests. The largest part of the population of these storks in Latvia nest in areas managed by JSC “Latvijas valsts meži”, where micro-reserves are created for protection of the species, territories for the protection of habitats, as well as no forestry works in the vicinity of the nest. LVM environmental experts annually build artificial nests to promote nesting of protected birds - black storks, ospreys, golden eagle and eagle owls.

(video has a bad signal) 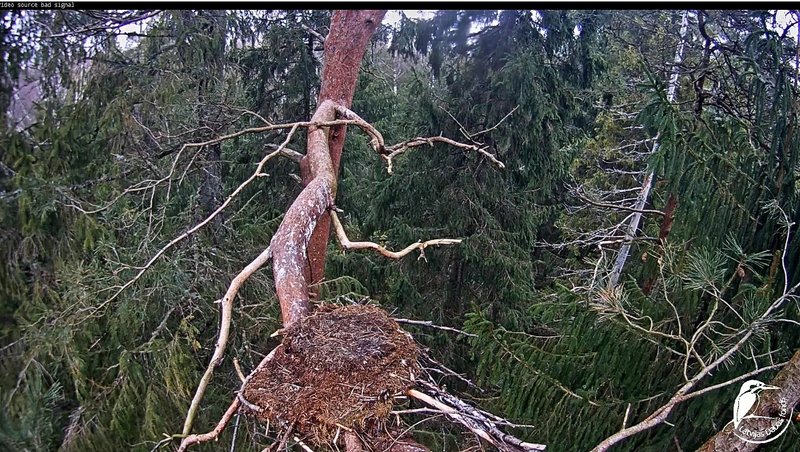 I think it is Gaja. 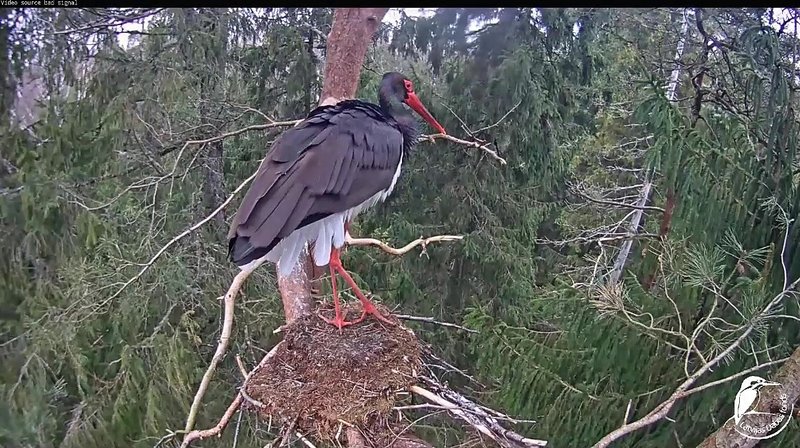 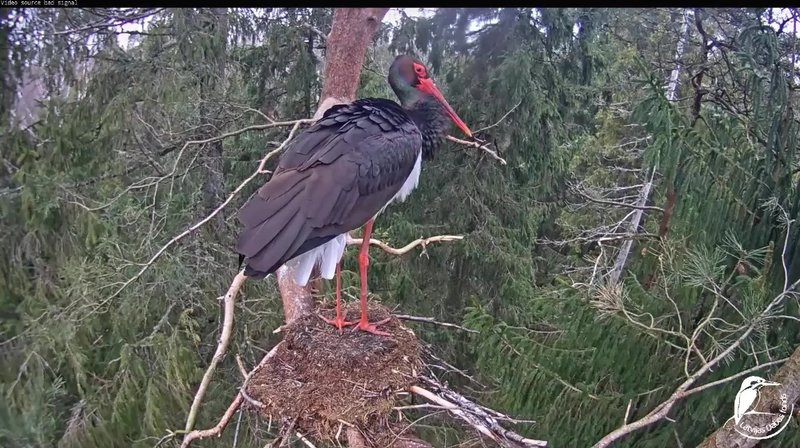 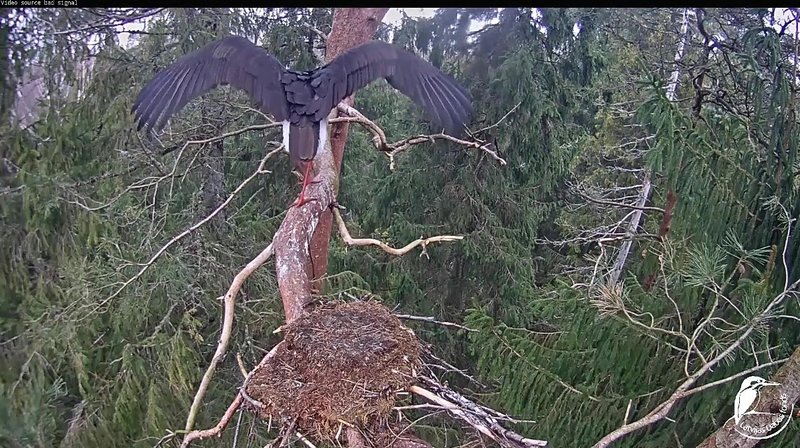 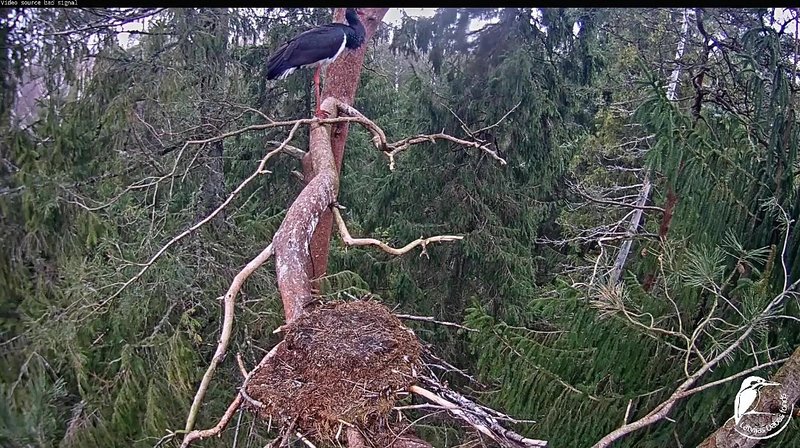 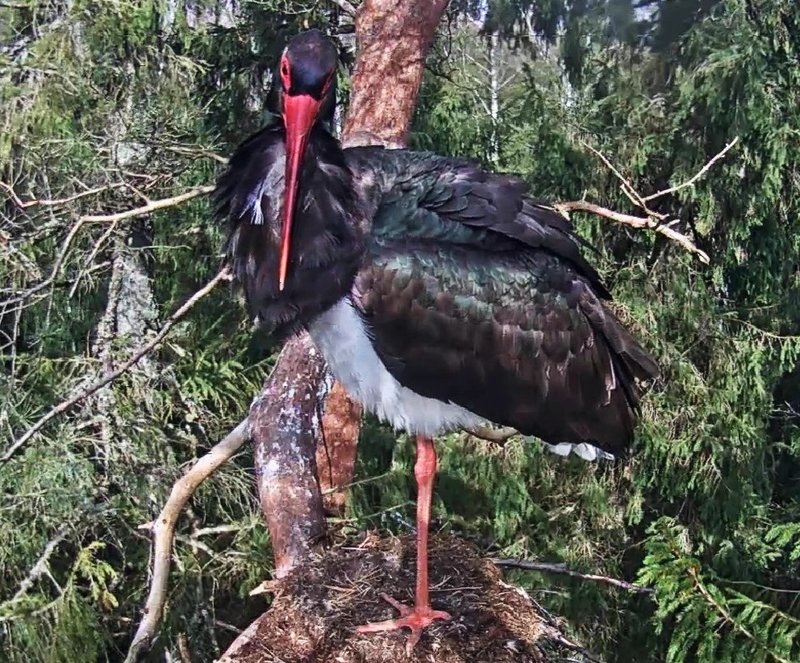 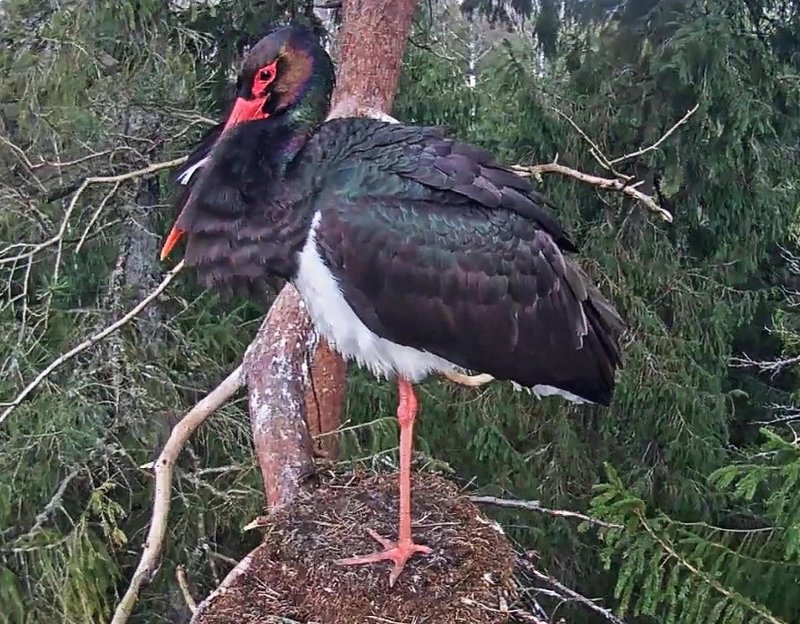 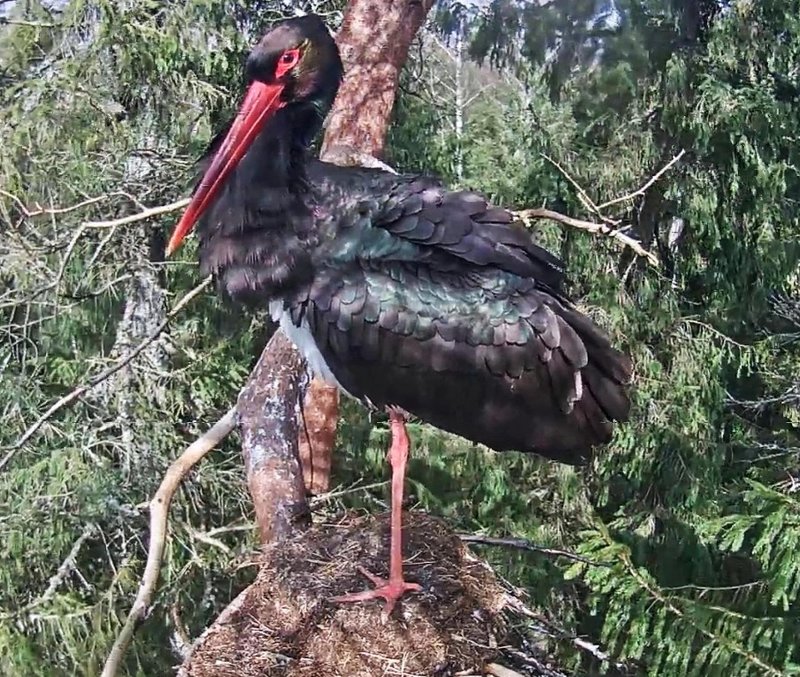 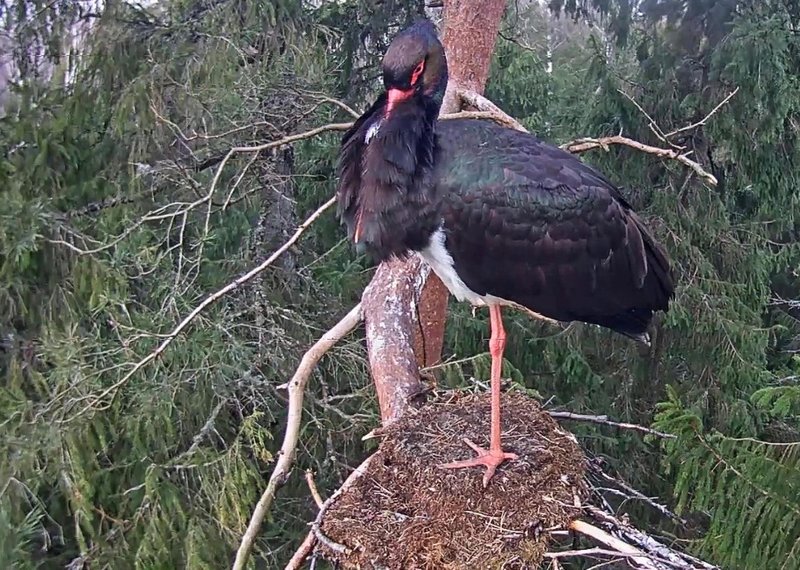 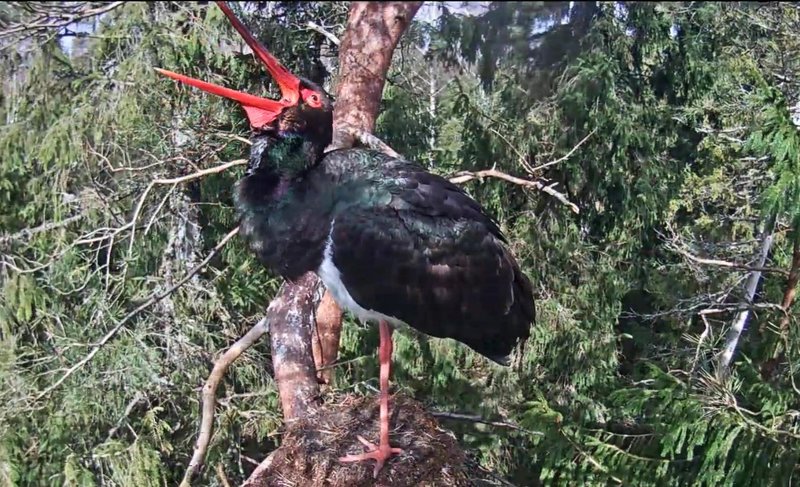 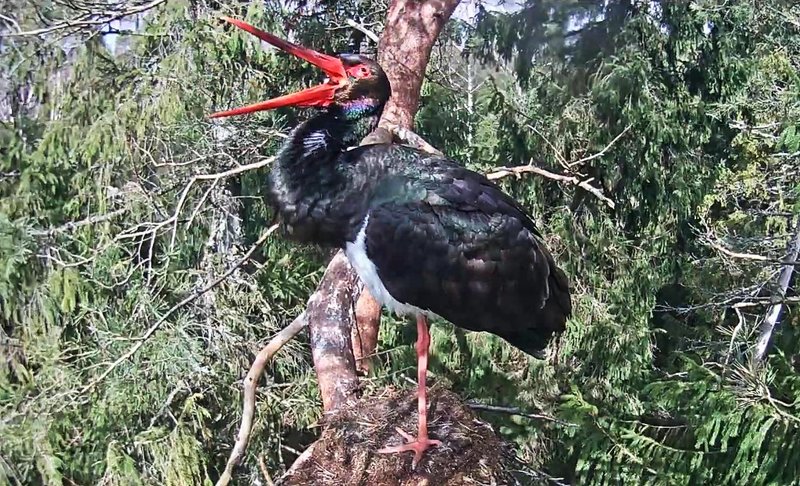 Repair Team is on the camera

17:54 They are here on the nest. I think I can hear Janis K?
This is a rough terrain. Very hard to reach! It's great that they are there.

Gaja will not be thrilled

We have a date stamp again!

I was right! It is Janis K 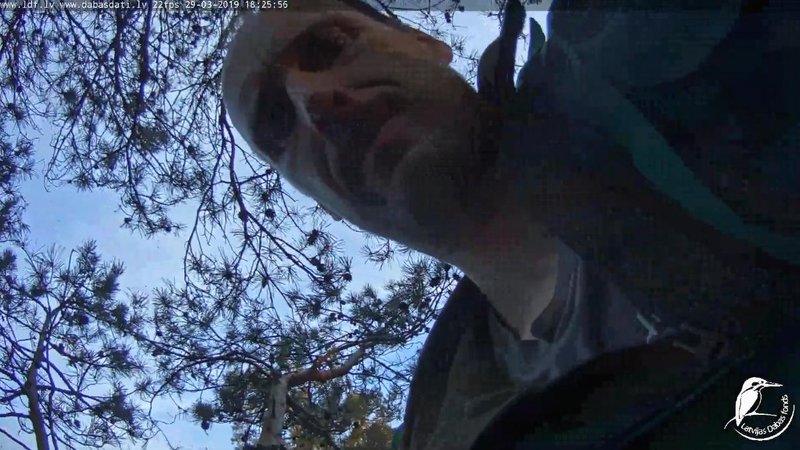 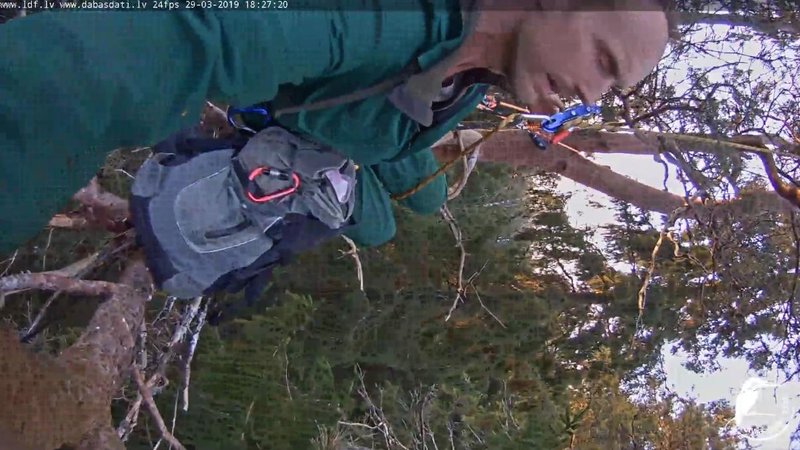 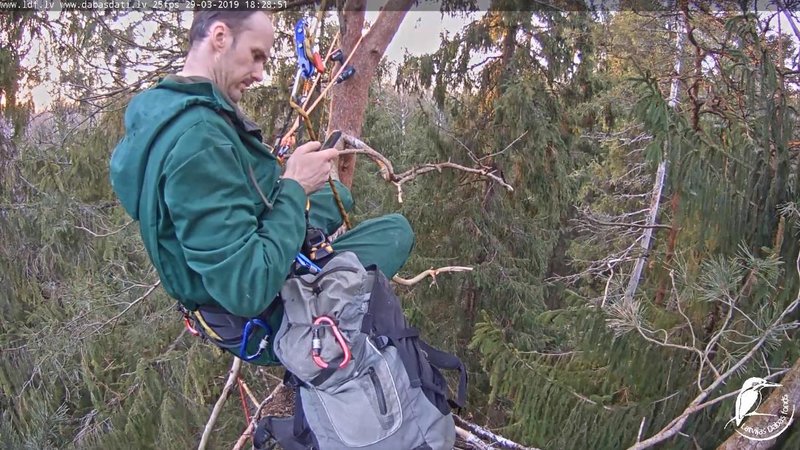 yes, that was Janis. 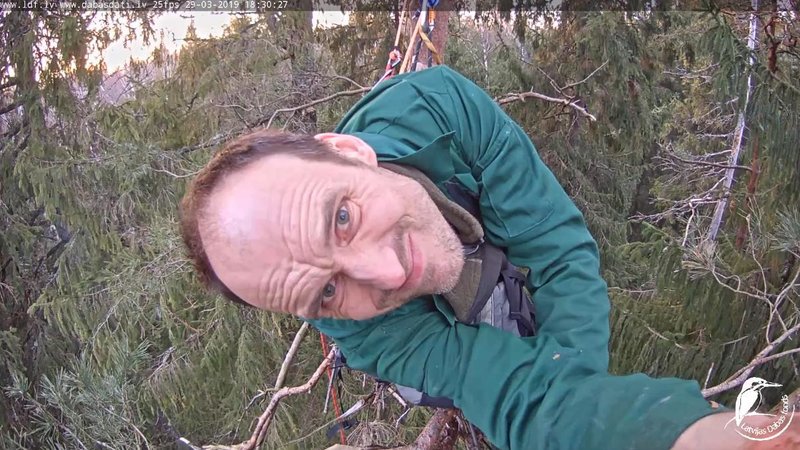 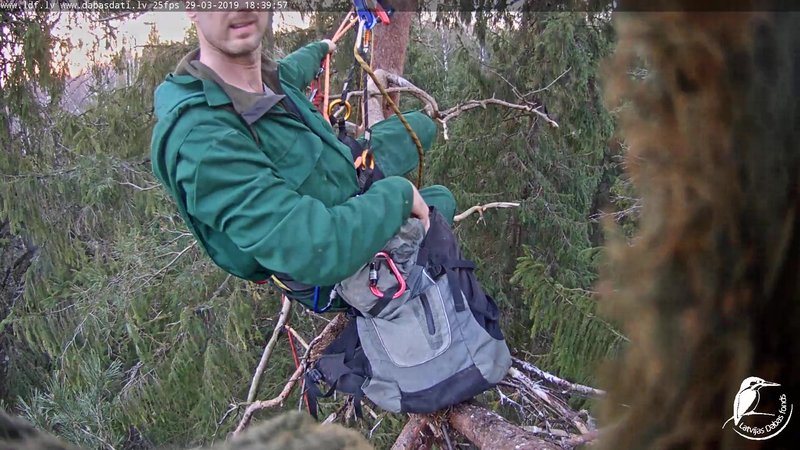 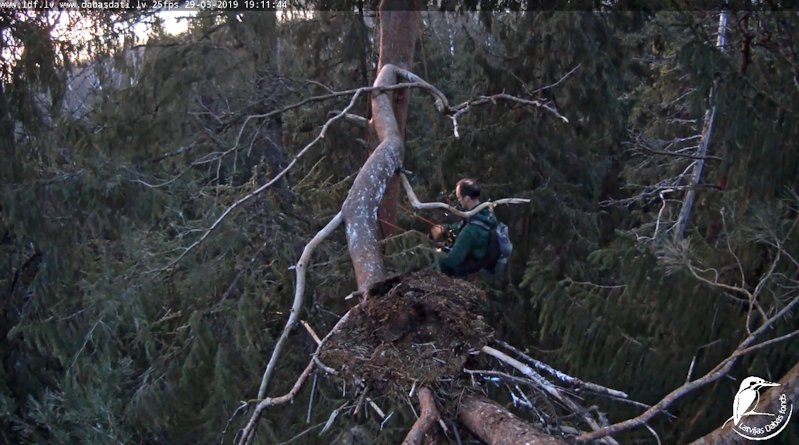 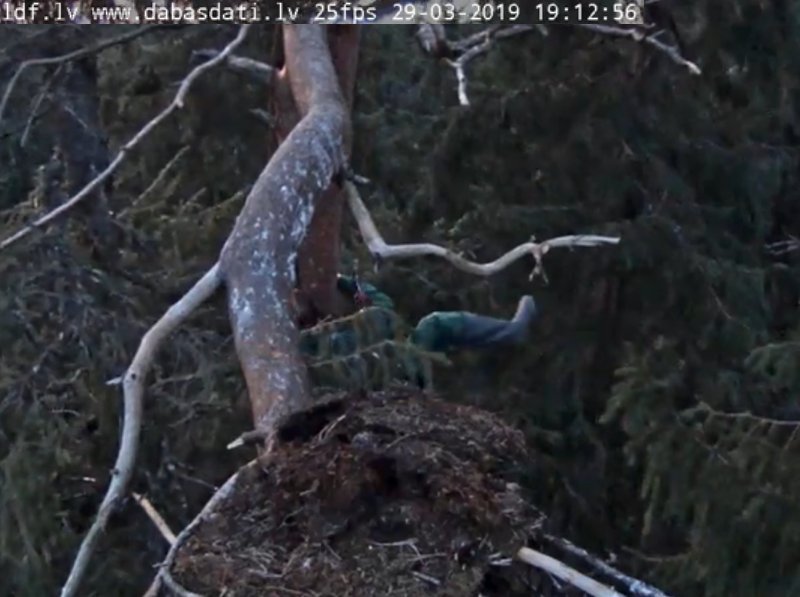 one answer in comments:

Melnais stārķis. Dzīvības lidojums Hello, Lyudmila Isakova! We do not know when this stork arrived and this could not be the owner of this nest, just passing by. We need to keep watching this camera to see what happens next. Most likely the pair of last year or other pair comes back and re-build the nest.

What I know from the DD Forum is that this stork was already at the nest yesterday. And it's certainly a female stork

EDIT: Oh, I found it. Then Maris misinformed? I do not think so

this is not the most elegant way to start a topic but i hope it will work.

My question was, how can I recognize black storks when they have no rings?

Info by Maris Stradzs
Two types of picture that might help (in theory, I have not yet tested it on ringed birds due to other duties and lack of time) is spread from behind (sharp!) of either of wings (best of all both, but could be on separate pictures) and face in perfect profile (criteria of ideal profile is – „air” should be visibile through the nostrils) as close as possible from the same side. See examples of this year. I might not be able to say certainly yes if it might be the same bird, but the likelyhood that that is not the same bird in some cases can be confirmed with certainty even without rings.


Pictures for example by Maris S. 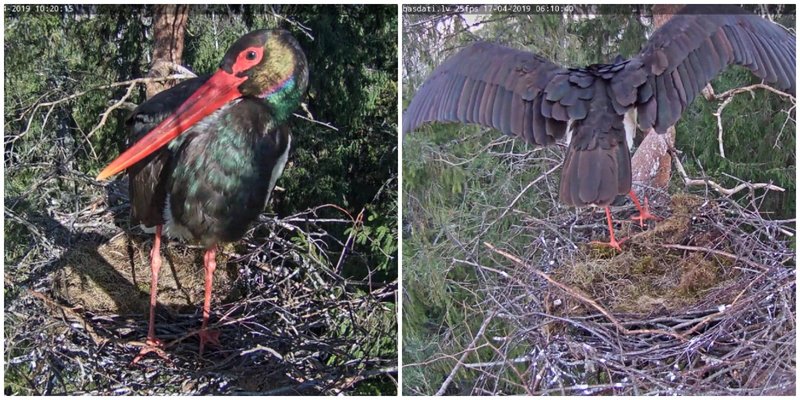