Thanks to all for helping !

Ame, you too? I thaught you are working only 4 days now

Lately Finland is on the news with good news: Women are rulling and only 4 working days

jihuu, the camera has started at 14:49, apparently by itself. 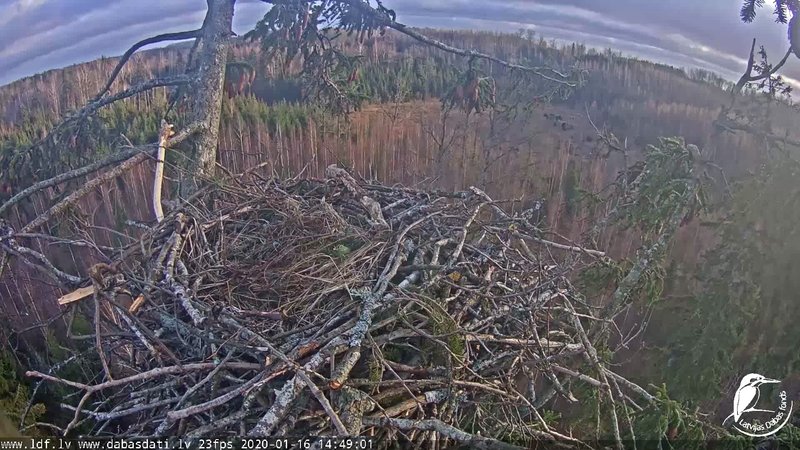 Abigyl, i work here every day.

today i was shopping because i guessed that the camera would be sleeping late in any case.

where do you read or hear these great news from Finland? you seen to know these things better than i do.

i made a pair of pictures to see if there are some changes on the nest.
the upper picture was taken when Raimis left the nest two days ago in the evening. 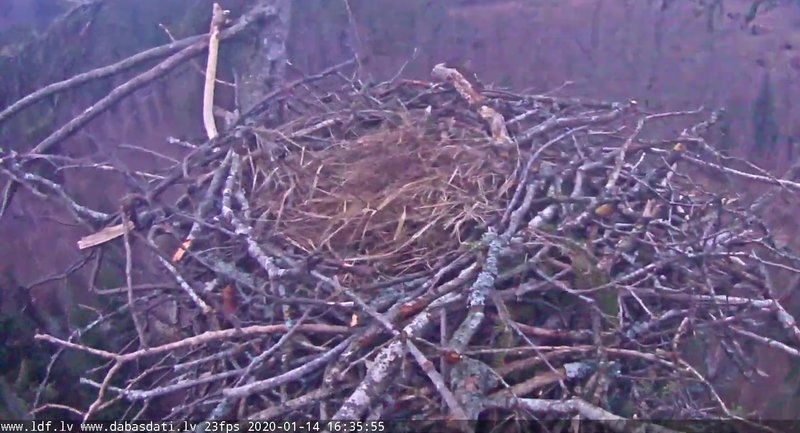 this was taken when the camera started. i can't see any major changes like new sticks on top the old ones. some straws are a bit differently and one green twig is visible on them. the wind has possibly reorganized them. eagles usually mix things more than this when they land on the nest even for a few seconds. 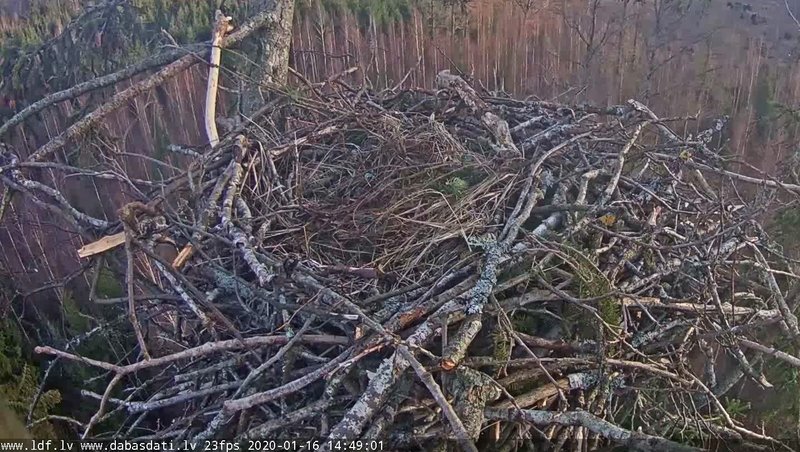 The stream is back

Thank you Janis K and Friends

i hear some rattling or knocking, mechanical sounds...
he is very near!

under the nest on the right side.

he checked the microphone. ... and put some kind of cover on it.

then he screws the microphone on the tree.

oh carp, my recording was not on.

are you recording?
Top 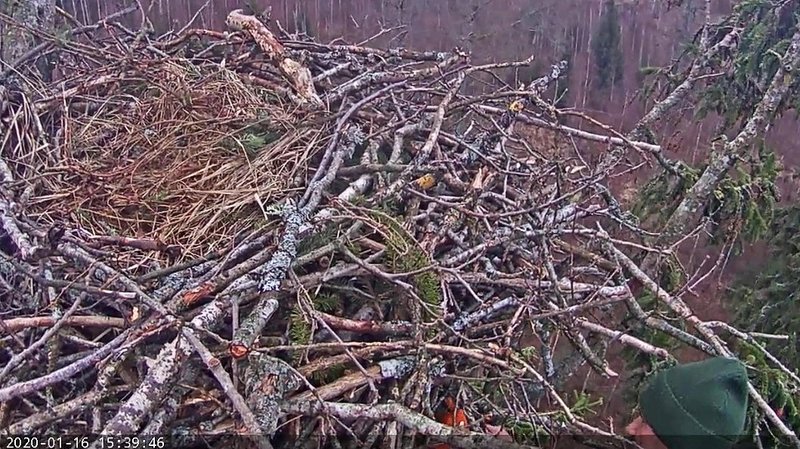 did he finish? i thought that the plan was to clean the lens, too.

15:48 i hear distant talking, from the ground apparently. he finished and climbed down.
15:49 sounds of rope being pulled down.

I was short on my balcony.. and there he is 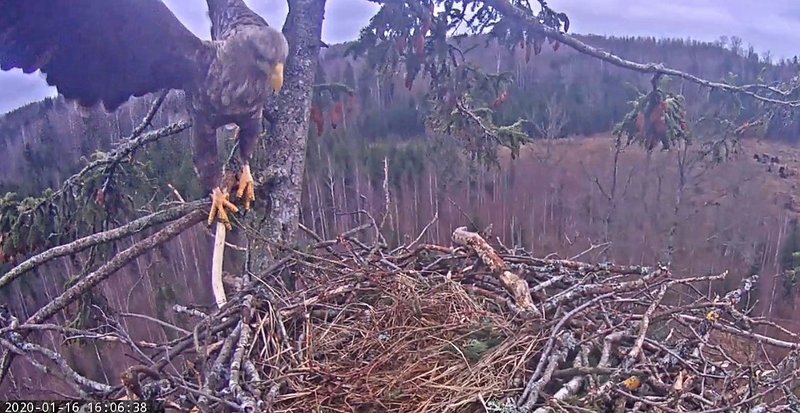 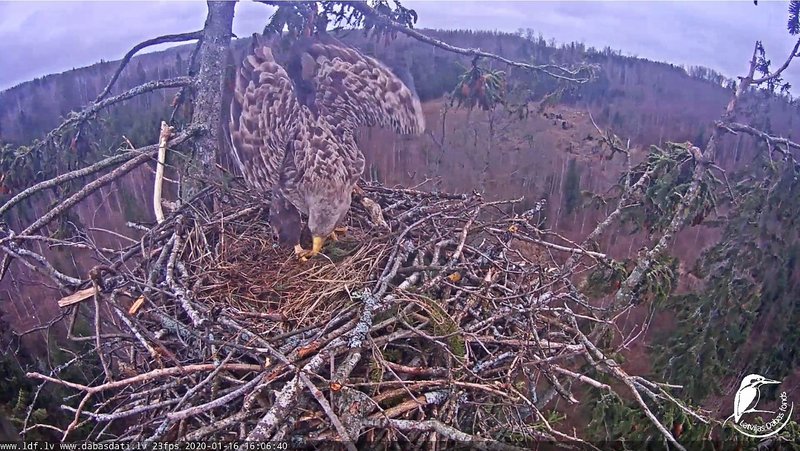 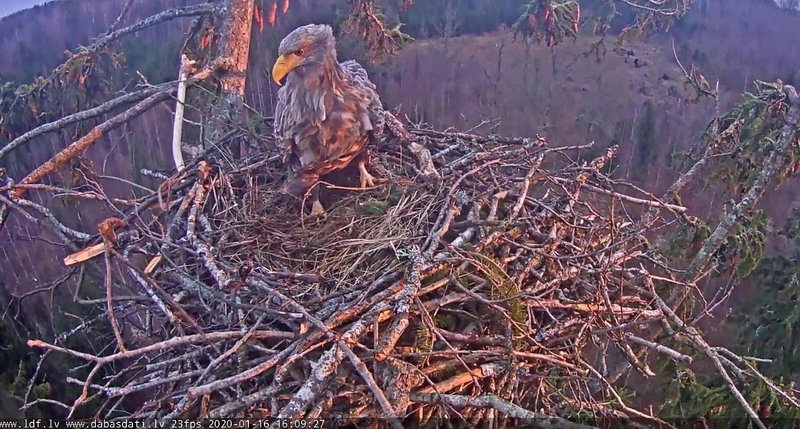 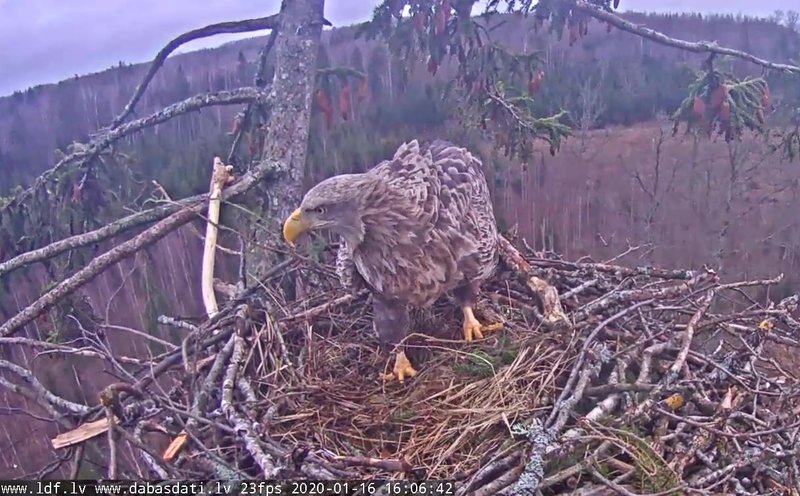 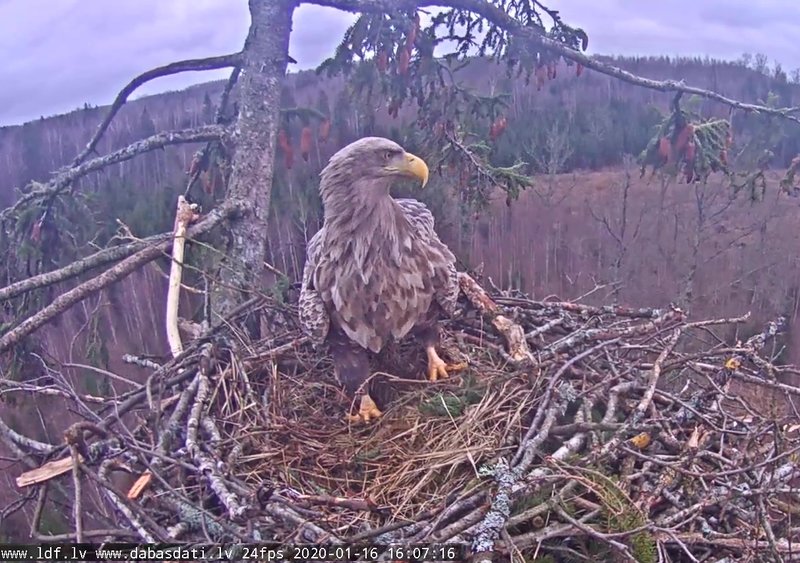 i think Raimis saw Janis & co here. i hope that Milda didn't see them.
a little glimpse of sunlight.

Liz got exactly the same picture as i!

I think you're right! There is no breeding season yet, but they are in courtship.
Top

he looked very suspicious all the time he was here, and upset.

did you make a recording Liz? i think that i saw a bird in the upper left corner a few minutes before Janis climbed up. the bird was 15:35:30.
Top

yes, i've recorded it. It looks like an eagle

i'm re-recording from the screen now. i think i saw both eagles in the sky in the top left corner at 15:35:00. they circled there a few times. i happened to see the last circle live.
both Milda and Raimis saw Janis there.

this is the visit of the repair group.

Yes, both were there for almost one minute! Thank you!

ZOOM to the eagles and ZOOM to Janis

where do you read or hear these great news from Finland? you seen to know these things better than i do.

It appears in many international papers and TV news because it's very different and new.
It's more important than the story of PM of New-zealand who is young and gave birth during serving in the government.
You have a PM young lady and 4 ministers. I remember their photo, it looked like 5 young models...

can you make a zoom video?
- thank you!

i could not get them in one picture. they were flying to the right here. the upper bird flew out of the top rim of the picture and the next second the other entered the picture from the left side.

here the last one of them is flying out to the left.
(i guess this was Raimis, because he was brave enough to come and the check the nest later)

edit: i found one picture where they are truly together. the picture quality is so bad.

Abigyl, there are 12 female ministers and 7 male ministers in our present government, from 5 different parties. all the leaders of these parties are women. you have seen their picture.

there were soon some complaints that equality is compromised since 2/3 of the ministers are women. i hope they were not meant to be serious complaints.

Glad to hear both are around. Milda hasn't been on the nest for a while it seems.

by the next brood