The Karula National Park in the south of Estonia is a perfect place for black storks to nest and breed.
The two adult birds we watched last year were named Karl II and Kati. They had four chicks, initially, but only two went on to fledge. Sadly, neither of them survived.

Here, one can read about Karula National Park
https://www.keskkonnaamet.ee/sites/defa ... ula_EN.pdf

Installation of the camera on the nest.
http://www.talgud.ee/lugu/must-toonekure

Camera information[/b
If the stream stops it may be helpful to check on the Kotkaklubi Youtube channel. where a new link can be found. This is something done by Youtube, not the camera.
https://www.youtube.com/channel/UCCvBXT ... Saqd19N0Sg

Another approach is to use the LK main page and choose the camera from there.
https://www.looduskalender.ee/n/

There are many articles on What We Know About Black Storks https://www.looduskalender.ee/forum/vie ... ?f=2&t=989
Some are lengthy so be prepared for a long read

Links may need to be edited. Please post if you see an error.
Top

We have been able to follow Karl II's progress on the Following Karls' Families topic https://www.looduskalender.ee/forum/pos ... 5&p=787995.
He is making slow work of his journey to Estonia! Meanwhile, Eedi was seen on Karl II's nest this morning. KARL II is still in Ukraine. The weather there is not helpful to him for a northward flight.
Top

On 24 May one of the eggs broke under the belly of Karl II (reason unknown, possibly due to a thin eggshell).


CAMERA MALFUNCTION
The camera transmission broke down during a severe thunderstorm on 25 June and was re-established on 15 July.


RINGS AND TRANSMITTERS
On 9 July, the storklets received their rings and a transmitter.
It is the first time that Kotkaklubi uses leg-mount transmitters on Black Storks.


NAMES
On 2nd August the result of the name vote was announced:

On 4 August Udu and Pikne made their maiden flight, at the age of 68 days.

Hello all!
Good to see Eedi!

I see many guests online, so, in any case, Eagle Club channel with all current webcams 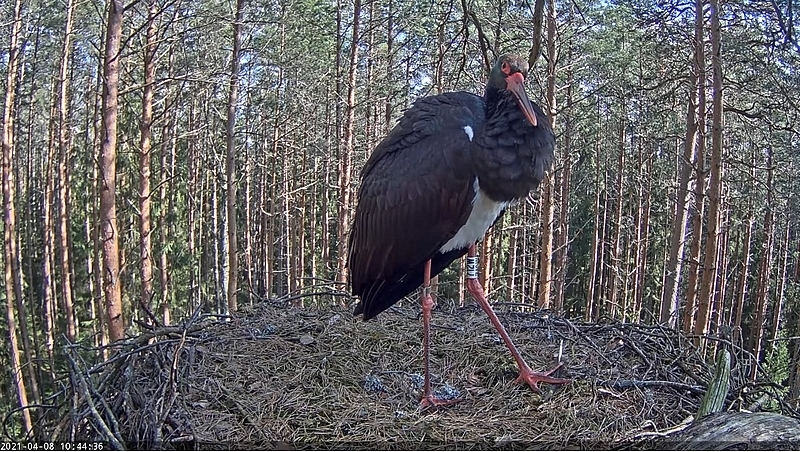 edit: And will Kaia be back?
Freedom!
Top

Many thanks for the new topic, Jo!

The new season at the nest in Karula National Park is now officially opened.

I hope that this year everything will go well!
“Clearly, animals know more than we think, and think a great deal more than we know.”
— Irene Pepperberg
Top

What a great thing to see Eedi,
thanks Swenja!
Top

Eedi was silent, does that mean he realizes that nest is not his home?
Top

Jo, thank you very much for opening the topic 2021

I wish a successful season on this nest! I would like to hear little Storklets twitter again ..

the video of Eedi stay at Karl II nest

The beginning is missing because there is a gap in the stream. Unfortunately!
LSE Anna & Andris, chick will hatch
https://www.tickcounter.com/countdown/3 ... l-hatch-in
Top

asteria, we did not see his arrival! But I saw that he popped in Karl's nest

Liz, thank you for posting your video here. This is the right place for it!
Top

Many thanks for the wonderful news, photos and video!
Eedi is very cute! How beautiful these storks are! We haven't seen them in a long time...

On April 6, I wrote: "I wonder what happens when Eedi arrives at Karula Nature Park before Karl II?
He is also from Karula. Maybe he will occupy Karl's nest?"

I really hope Eedi goes and stays on his nest, he just checked the neighbor's home, it was the "neighborhood watch"

Karl is smart. He knows that the weather in Estonia will get warmer later. He's not rushing.
Maybe he met Kaia on the way?

I think he just took a little break. He doesn't seem interested in this nest.

On the cam tape Eedi is silent. And yes, he uses the nest for having a break.
Top

It was really nice to see Eedi

Eedi also wanted to be flashed by the camera

All are very glad and hello!

Thanks for the new topic, and for the photos and videos in the previous section! I think it was Urmas who carefully put the feather in the center of the nest for us

We really hope and look forward to the new season.

thank you for the camera, the new topic and all the work everybody has done
Top

Anne7 just wrote (many thanks!):
"Today, KARL II flew 266 km, and is indeed in southern Belarus!
He is a little north of the village Pribolovichi, Lelchitsy Distric, just across the border."

EDIT: 8:10 The camera is working again 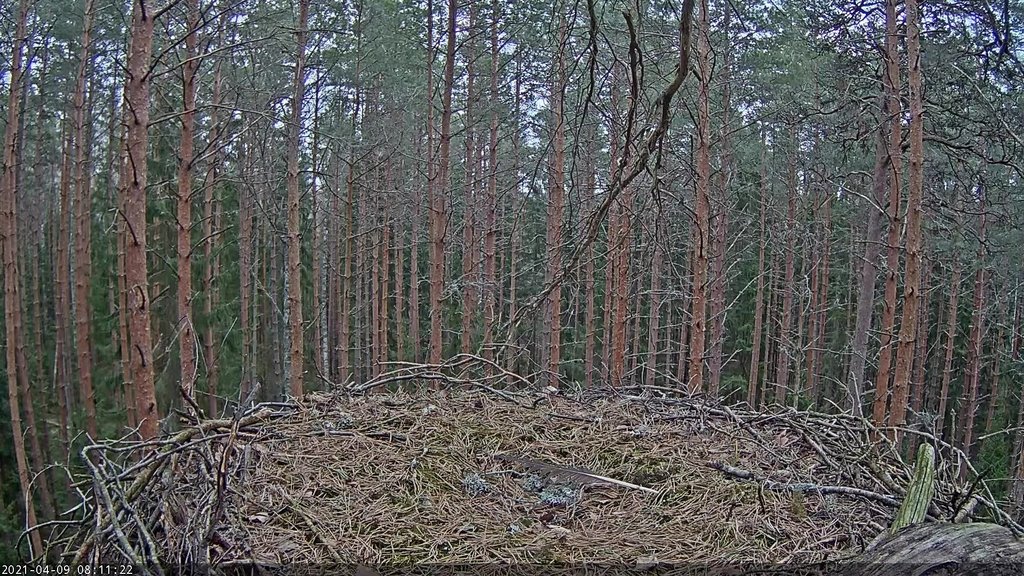