Transmission courtesy of  Tele2 and EENet

There are two cameras on black stork nests, one in South Estonia and the other in  South Latvia.

We can watch the black stork nest in Karula in Estonia   for the second year.

The nest is quite bulky and evidently also old. Such a chandelier-like nest hanging from one branch we have not seen anywhere else. How well will this special nest stay on the branch? On ELF’s community work (“talgud”) page there is a series of images about the installation of the camera installation and its prehistory to see. Male Karl arrived to the nest on April 4th 2017 at 10:37 am.

At the nest a new camera AXIS F41 is installed together with a microphone constructed by Omar.

Many helpers have contributed to the realisation of the black stork camera:

Kotkaklubi (Eagle Club)- searching for a nest and assistance at camera installationl
EENet – coding of stream and distribution to users, technical emergency help, recording of material
Beta-Grupp – camera testing and tuning, building of microphone
TELE2 – mobile tower for receiving antenna, installation of antenna on tower, use of fibre optic cable
Kernel – antenna setting
Ain Nurmla – help at camera installation and testing of communication options
Looduskalender – camera home site and forum on the web
Thousands of viewers – the most important because otherwise there would not be so much point in having the camera!

Partners in the venture:

The black stork nest in Latvia is fitted with a camera by our Latvian colleagues from 2015.

Transmission is by  LMT

The nest is in the Latvian Zemgale area – a landscape with the cities of Jaunjelgava and Jēkabpilsi at its northern edge and Ērberģe village in south. The nest is in an old oak tree in a primeval forest, at the brink of a creek (the purling of the creek is audible in the camera). The transmission is by Youtube stream. The nest is known since 2013 but at the time of locating it nesting had finished. Pairs of young storks have taken off from here. Last winter one of the branches under the nest broke but the nest remained in place. The adults have no rings and so their age and origin is not known.

The web camera works thanks to its supporters and helpers:

LMT channels transmit the data from the forest to Internet;
Jānis Rudzītis made the audio installation of the whole system in Latvia;

The activities are led by  Jānis Ķuze. 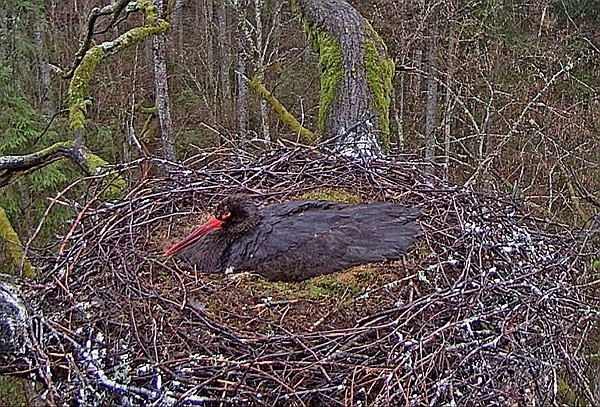