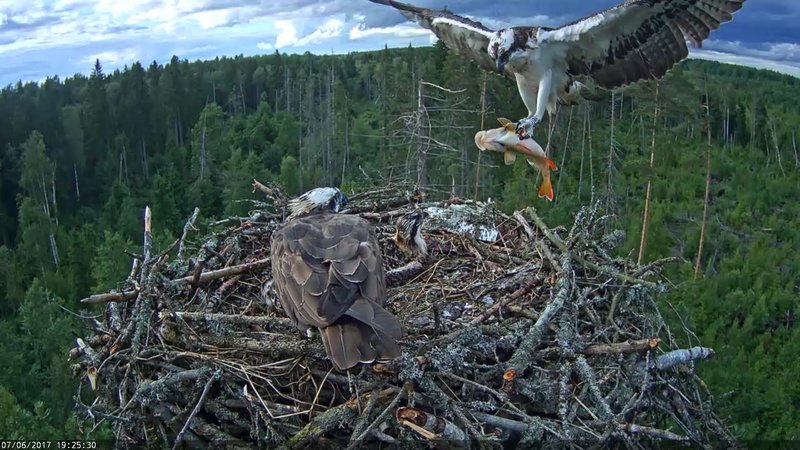 To start with let us see what physical advantages ospreys have for catching fish.

Starting with the plumage, it is denser than that of our other eagles and thanks to the slight oiliness it does not become noticeably wet; on the powerful rise into flight the last drops of water are shaken off. It is also important that ospreys in diving into water when necessary can close their nostrils that are visible on the beak. It is certainly nasty when you on swimming happen to get in water through your nose.

You have surely noticed in the webcam that ospreys are long-legged. The ”fishing tools” have extremely sharp claws, and some about a millimetre long spines on the underside of the toes ensure that the wet and slippery prey stays in the osprey’s grip. In addition to this an osprey can turn its outer toes backwards – so it can seize a prey with two claws from either direction and this grip is powerful. The female must sometimes tear the prey from the claws of the male arriving in the nest to be able to start feeding the young.

Catching fish weighing two-three hundred grams seems sensible to an osprey for bringing to the nest. They can also manage kilo-sized ones but then the fisher must eat its share in the vicinity: that a larger fish is brought to the nest with its head eaten has also been seen in the webcam (there is an Estonian saying that on the head of a pike there is more food than in a poor man’s barn).

A spectacular picture of its power is offered by an osprey actually catching fish – who has managed to see this surely agrees.

From behind the forest the osprey appears in serene flight above the water body, flight height may be about 50 metres: so all that happens in the water is visible to the bird. At some moment the flight is slowed down and hovering flight follows (hovering flight in hunting is also used by buzzards and kestrels), and you may guess that the osprey has noticed a suitable prey. It then dives downwards to some twenty metres or thereabout to inspect the victim. After this it hovers once more, pulls its wings close to the body and plummets towards the water surface. A few metres above the water it spreads the wings and stretches the legs towards the prey catching it in the claws, even from water a metre deep - what a sight!

However, a fisherman’s life is not an easy one, far from each dive results in a catch.

Flying towards the nest the osprey settles the prey in its claws with the head in the flight direction, evidently in order to diminish air resistance. Sometimes however the osprey realises only after it has pressed its claws into the back of the fish that the catch is bigger than its strength; a large fish can pull the osprey under water. In such a case it mostly loosens its claws from the fish and with a noticeable wing effort gets into air again after an up to 10 seconds long enforced underwater swim.

We will discuss soon what the food need of the osprey family might be now.