Two cameras are installed at black stork nests, one in South Estonia and the other in South Latvia

The black stork nest in Estonia is new to the viewers as well as to us:

If your browser does not support Flash, click on the mobile device links below.

The black stork nest in Estonia is not new for the storks breeding there. The nest is quite bulky and apparently quite old as well. The Estonian Fund for Nature (Eestimaa Looduse Fond, ELF) proclaimed this year as the Black Stork Year, and the new black stork nest camera is the Eagle Club’s contribution to this year.  Pictures  from the installation of the camera and its prehistory can be seen on the ELF voluntary work site. The camera started sending images from the nest on March 29, on April 4 we had the stream in working order. By that time the male black stork had arrived and had made some tidying in the nest. On April 5 the female also arrived and nest life could start. This created interest in  news media  too. The first egg in the nest was observed on April 12. The black stork pair has been given names by the viewers - Kati and Karl.

The same camera system that was earlier placed at the Läänemaa black stork nest has been installed at this nest. If an opportunity should arise, we will update it next year.

Many helpers and supporters have contributed to the camera viewing of the nest life of the black storks:

Parners in the venture:

The black stork nest in Latvia  had a camera installed last year by our Latvian colleagues.

Transmission is by courtesy of  LMT and EENet 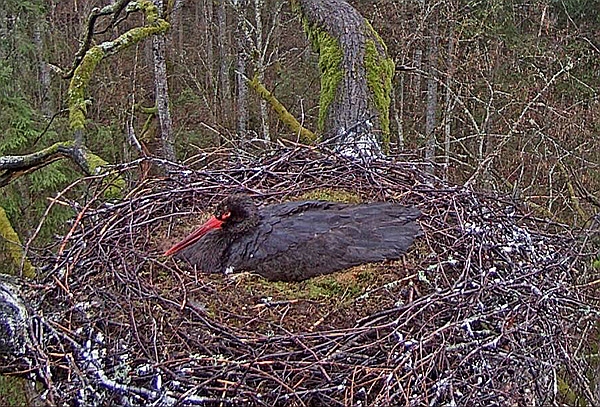 Click on the image to see the live stream

The nest is located in the Latvian Zemgale (Semigallia) region, in a landscape with the towns of Jaunjelgava and Jēkabpilsi at the northern edge and the village of Ērberģe in the south. The nest is in an old oak tree that grows in an ancient forest, on the bank of a stream (the sound of the stream can be heard in the camera). The nest is known from 2013, but at the time of discovery the breeding period had ended. In 2014 two storklets fledged from it.

In 2015 the storks hatched two stork chicks despite the fact that an attack from a White tailed eagle was experienced during the incubation time and two eggs, of initially four, were thrown out of the nest. The remaining two eggs were hatched and two youngsters left the nest later in the summer. One of the siblings – a young female, Upene -  was equipped with a satellite transmitter and was traced on her migration route to Africa.
In 2016 one of the storks arrived already on March 26. His mate, Baska, did not arrive until April 7; on March 11, the first egg was in the nest.

The web camera has been implemented thanks to the supporters and helpers in  the project:

LMT  provides data communication from the forest to Internet;

Jānis Rudzītis made the audio installations in Latvia;

The activities are directed by Jānis Ķuze.