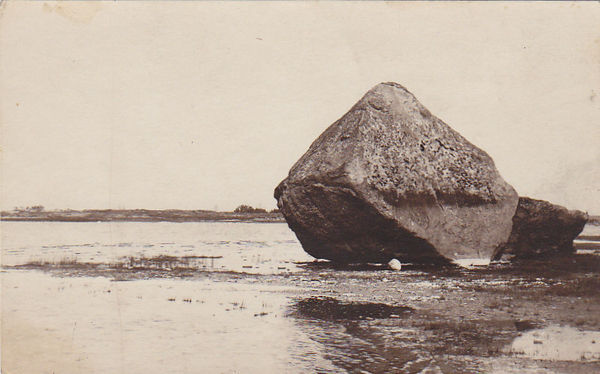 Last week a notice went through the  newspapers that the Muinsuskaitseamet (Estonian National Heritage Board) had finally granted permission for removal of three ritual rocks that would hinder the expansion of Tallinn Airport. What was startling in the news however was the fact that one 100-tonne sacrificial rock with grooves would be sawn into four parts and transported so to the others.

Involuntarily the story of the Meeksi Jaani rock in Setomaa, with healing properties, came to mind. There a gentleman a couple of hundred years ago had the idea that his cattle barns would get a nice foundation wall from the rock. He had Jaani rock crushed and the pieces laid into the foundation wall. However, the animals in the barn started dying and wise men advised him to bring back the rock to its original position. This done, the disease ended. The rock now stands on its original site, in four pieces, and each year people throng there to make a sacrifice for their health. They say that it helps.

Is it worthwhile to believe ancient stories? Of course there is much incredible in them. Much that seems like excessive-mystification and much that also seems like over-glamourising. But the stories are worth listening to. In them our ancestral values are also set down. The stories are more powerful and more severe than today’s laws and penalties. Effects of neglecting the values described in them might be compared to shaming mail in today’s media. Something that today even a worthless or corrupted businessman fears.

Of course you might ask what have these old rocks to do in today’s technological society, whoever worships them still? When did last a representative of the indigenous belief come to bring offerings to the airport rocks?

But you might also ask if we need this expansion of the airport at all? Maybe these stones are there as a sign that we should make reasonable decisions. Is it not wiser to expand the Ämari airport instead or to build a separate airport for transport of goods so that Tallinn airport should not creep out of its borders and put the only water reservoir of Tallinn at risk? Luckily it is guarded by Linda. I hope sincerely that no-one ever gets the idea to remove Linda’s rock from Lake Ülemiste.

The expansion of  the Tallinn Airport reminds very much of the development of the Saaremaa deep port. Do you still remember the disputes 15 years ago over the location of the port. The port that conservationist managed to ward off from Undva, one of the most beautiful places and national parks in Saaremaa. But which unfortunately was realised anyway on the shore opposite another important sacred area and tourist object, the Panga bank. Where are the promised white ships now? Where is the promised flourishing of Saaremaa and the hordes of tourists?

A similar ”major object” is being born on the grounds of our sacred springs and as yet still preserved sacred groves. The Rail Baltic route construction destroys many sacred sites, shuts off vital water aquifers. In reports these sites have all been noted by researchers. Looking at the list one is overwhelmed by depression. While rocks can be cut up and removed, springs cannot be closed. The water flows out somewhere else but it can leave our wells dry, turning the water systems of small communities built for euro money upside down.

The more so since it is no longer known who made the decision for the people. Who decided in our country that the new railway should be built across holy sites. Journalist Inga Raitar has been searching already for a long time for documents where it is clearly stated who decided the establishment of the Rail Baltic in Estonia and whose signature is there.

It is still possible to put up your name against the iron horse path that splits Estonia in two halves with fences. The path whose benefits most Estonians probably cannot imagine for themselves. Who travels for 10 hours to Europe these days, what goods are necessary for Estonia to bring into Europe in such quantities that billions are wasted on it.

Another fence is coming up immediately beside the railway: again there  is talk about the four-file Tallinn-Tartu highway. The two fences will be so tight and so impenetrable for animals that conservationists between themselves joke that Estonia is building barriers against jackals.

Maybe it is how our ancestors have shown us the landmarks that should not be crossed? Missing is only a tale of the fall of the fire-spouting iron horse into the Viru Hell, and of the victory of the dragon-slayer so that all should be able to live on happily and in abundance.

Let us keep our fingers crossed that on building the Tallinn-Tartu highway and on expansion of the embankment nobody gets the idea to remove Linda’s rock from the shore of Lake Ülemiste saying: “Linda! Go cry somewhere else!”