Hissing may save great tit's life

Editor of science news from the Year of the Great Tit Marko Mägi, marko.magi@ut.ee
Translation Liis

Many know the various songs of great tits but few have heard the bird hissing like a serpent. Hissing can be heard when you come across a female bird sitting on her eggs in a nest box, elsewhere great tits will not use this call. It is caused by predators such as least weasel, stoat, pine marten, pygmy owl, stray cats that are threats to an adult bird in a tree hollow. Although a nest in a hollow is comparatively well protected from predators the hollow can become a mortal trap if the nest is discovered – the only escape route is controlled by the predator and in the worst case the predator may even be able to get into the hollow.

The greatest danger threatens precisely the incubating female great tits who patiently sit in the nest and warm the eggs during the twelve days needed for the incubation, rarely leaving from there. While birds nesting in the open can escape in any direction, hollow nesting birds only have one way of escape.

Presumably the aim of hissing is to frighten the predator. The hissing call begins huskily and ends in a  ššš  sound, often the female spreads her tail and wings abruptly at the end of the hissing in order to scare the invader even more. The sound is similar to the hissing of a snake or the warning call of a least weasel and it should hold off or scare possible predators enough to create an opportunity for the female to flee from the hollow before the predator has time to recover. A study carried out in Estonia and Latvia provided an answer to the question of whether hissing really brings an advantage to the birds and increases their survival chances or if it only provokes the predator to attack the nest opening even more aggressively.

During the incubation period a stuffed woodpecker was pushed into the nest box opening (see photos) and the behaviour of the female was monitored – if the bird started hissing, how often it hissed and how long time was used for the hissing was noted. Later data on nest looting were compared with the reactions of the birds in order to evaluate the advantage of hissing. 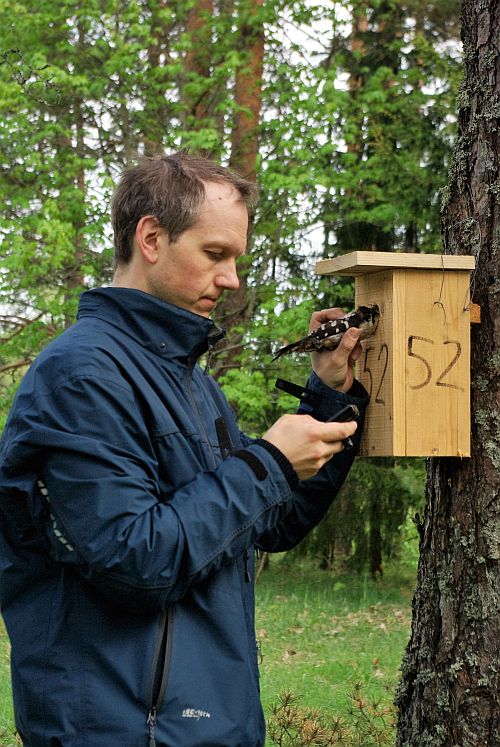 A stuffed woodpecker was pushed in through the nest box opening and the behaviour of the female noted. Photo: Marko Mägi 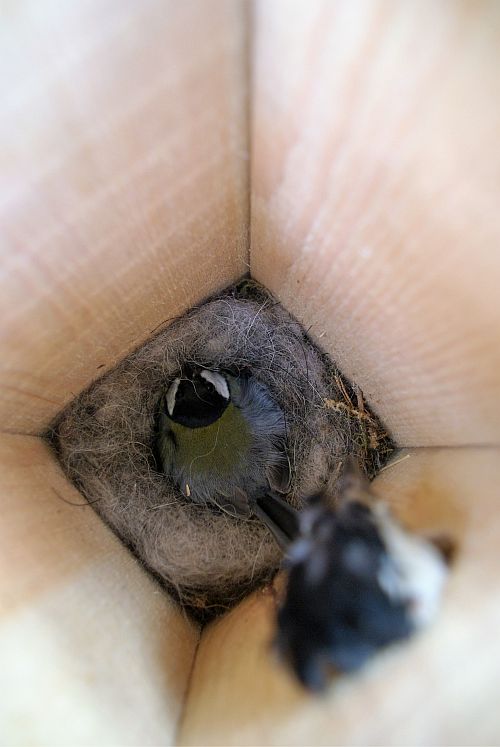 The majority of the females started hissing on seeing the stuffed woodpecker. The looting of the nest boxes did not depend on the hissing behaviour of the female but the survival number of the hissing females was significantly higher. Of hissing female nests, 15,4%  were looted, in 28,9% cases the female had been killed; of nests where the birds stayed silent on seeing the woodpecker 28,6% were looted, in those the female was killed in 75% of the cases. In addition the experiment showed that on hearing a record of hissing from a nest box cats stopped their attack on the nest box. From the results it may be concluded that the predator was scared off and that the bird that escaped from it had a chance to breed again. A study carried out later showed however that hissing females and silent females did not differ with regard to reproductive success; the benefit of hissing was rather tied to the actual conditions and the character of the female bird.