About the nest life of nightjars 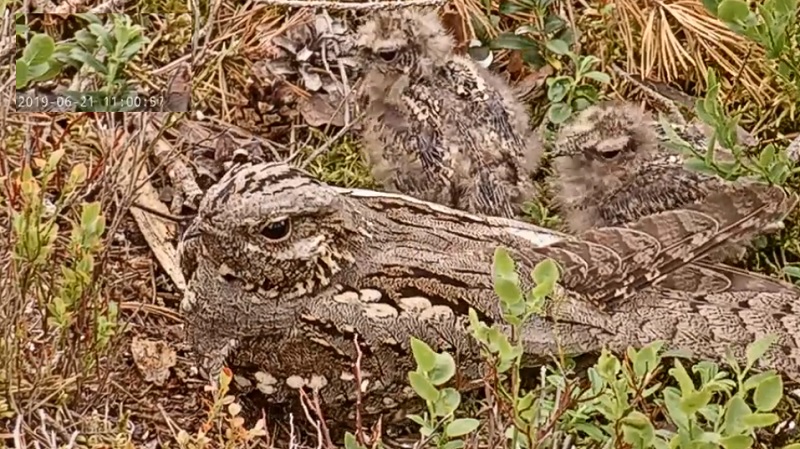 The nightjar nestlings hatched within less than a day on June 13 and 14 and by today they are one week old. Splendid that we have been able to follow the doings of these birds through the web camera. We have been lucky: after all this is the Bird Of The Year.

During the light nights around. the equinox, the adults start food-hunting half an hour before midnight;  the female on the nest has not fed the chicks during the whole day. At the same time, or a little earlier, we can hear the ”engine purr” of the male bird nearby which however is interrupted when he arrives closer to the female.

How do we know which of the parents comes to feed the chicks at night? The plumage of the female we can see the whole day, it is uniformly brown (grey during night in the IR light). When the male arrives at the nest we notice flashes of white wing or tail feathers (the female lacks those even in flight view).

The nocturnal birds keep their eyes half-closed during daytime but the large eyes are wide open during night (which can be seen in the camera), If you should see on a smaller road a thrush-sized bird rising in flight with eyes that gleam reddish then fairly certainly you have to do with a nightjar.

During the first nights after hatching we saw the male bringing food to the chicks but when the appetite has grown both adults are busy with feeding. Yesterday around midnight the adults evidently started trying to entice the chicks from the nest by purring,  but what is wrong with sitting tight and waiting for food in place? But the adults will surely succeed with their tactics in the next few days. The web camera is able  to search out birds moving in the vicinity but they will not be easy to see – notice the camouflage colouring.

How do the nightjars catch insect in the dark -  like bats? No, the birds have no radar localisation of their prey, it goes by sight and so the raising of chicks on out latitudes is set in the lightest period of the year. In addition, the full moon period that started on June 17 is also used. (in central where there are no ”light nights” the nightjars have settled the raising of the chicks differently, utilizing the  moonlight already from the start of the new moon cycle). 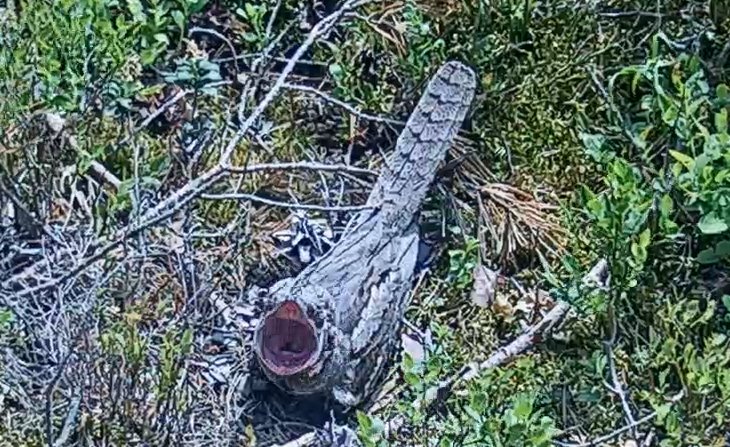 The beak of the nightjar is large, the throat wide and the skin of the beak is edged with bristles to make catching insects in the air more efficient

The adults hunt nocturnal flies and insects, creating little food packages of the catch for feeding the nestlings (depending on size the packages may contain around a hundred insects). When the feeder arrives at  the nest both nestlings are fed, once or twice.

What for and how does the hunt go? The major part of the catch is caught in the air: smaller mosquitoes, moths – large as well as small – occasionally dragonflies and beetles, whatever moves around in the heath forests.

The nestlings regurgitate the indigestible parts of the insects, as for instance chitin shells, as pellets.

More reading: Will nightjars be disturbed by humans looking for recreation in nature?  “Kas öösorri häirib, kui inimene loodusest kosutust otsib?“: LINK  (in Estonian, with links to literature in English)