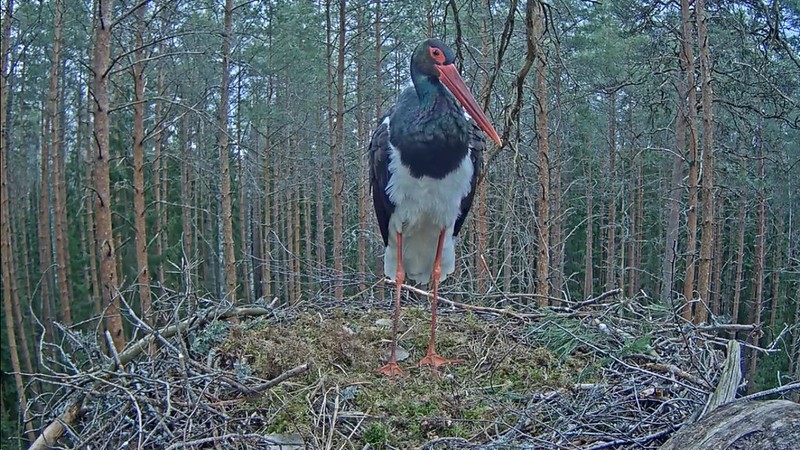 The male bird arrived at the nest yesterday, April 9.

See the discussion on LK forum on identification.

We are following the nest of black storks in Karula National Park for the fifth season in a row. You can read about the initial installation of the camera and the history of the nest on the Estonian Fund for Nature black stork theme year page. By the spring of 2018, the old natural nest with an interesting construction had collapsed and thus we built an artificial nest on the same tree instead. The camera is installed on this artificial nest.

We use AXIS F41 camera. Its main controller is located below the nest on a tree trunk. Only the lens with the sensor is above the nest. In the case of the black stork, there is no need to hide the lens, because so far we have not seen the storks disturbed by it. On the contrary, birds have sometimes tried to put the lens in the nest like nest material. The camera is transmitted via a WiFi link using two MikroTik antennas directly from the nest to the TELE2 mobile mast in Antsla. The signal then moves via cables to the Beta Grupp server, where the video is being prepared for YouTube streaming. We can only show YouTube stream this year. We know that some subscribers have used this black stork nest camera to share on their channels. It is not forbidden to use the stream from the nest elsewhere, but please let us know if possible (send a message to urmas (ät) kotkas.ee).

Contributors are welcome with each camera, as some components need to be replaced every year. We do not have any project support for hardware costs. The Environmental Investment Center has supported the installation, removal and maintenance of cameras.

Last year, a special donation campaign was organized by the forum members to support the various nest cameras. This year, donations were collected to equip the storklets with GPS transmitters. The migration routes of the previous nestlings from this nest can be seen on the migration map starting from the autumn of 2018. Only one out of five storks is still alive – his name is Karula. On the migration map, you can also see the male bird Karl, who was the previous owner of this nest. Unfortunately, Karl died in 2019 during the spring migration in Syria. A new male bird, named Karl II, has filled the vacancy.

For a long time no females came the nest this spring. Unfortunately, this is a common problem in both Estonia and Latvia, which we now also saw in our black stork camera. So far, there is no clear reason why there are significantly fewer females than males among breeding storks. Among nestlings, the proportion of both sexes is approximately equal. Thus, the daughters disappear before nesting or do not return to their birthplace to breed.