In the spring season of 2020, we were able to follow the movements of 25 eagles and 2 black storks on the migration map.

The lesser spotted eagles have the longest migration route. Jaan, Karin, Magnus and Mälgand all were in southern Africa during the winter. It took them a month and a half to cover more than 10,000 km journey back to the breeding grounds. They arrived to Estonia around April 20. Jaan probably returned with others, although his transmitter has not sent us any location data since Romania. This year, for the first time, Karin's nesting can be watched from a nest camera. Her mate is an unnamed lesser spotted eagle, who was equipped with GPS-transmitter by the Estonian University of Life Sciences. 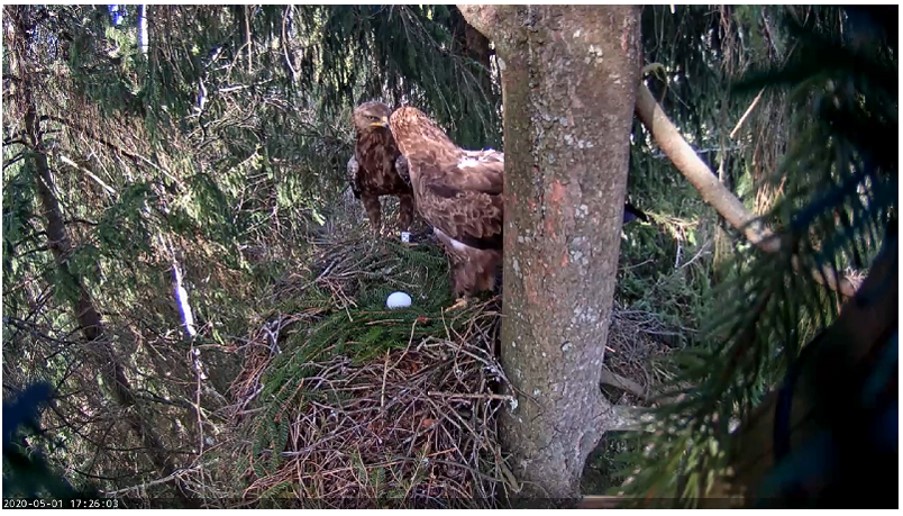 At the end of the autumn migration in 2019, Serzhik, a male osprey nesting in the Krasnoyarsk Krai, Russia, was killed in India when he flew into the power lines. His mate Usina spent the winter in southern Rajasthan, India, and began her spring migration across the Himalayas on March 26. By April 22, Usina had reached the Altai region of Mongolia, but her future is unknown, as GSM coverage is almost non-existent in the sparsely populated mountainous region.

Other ospreys on the migration map stayed in central Africa during the winter. While moving between wintering and breeding grounds, they use various migration routes to cross the Mediterranean. The Latvian osprey Vija flies over the Straits of Gibraltar, while the Belarusian ospreys Vova and Elena fly from Libya to Greece and Sicily respectively. The Estonian ospreys Markus and Kalle winter in close proximity at the border area of the Republic of Congo, but they choose a different migration route already starting from the equator. Kalle flies over Sardinia and Corsica while crossing the Mediterranean, but Markus flies over the Levantine sea between Crete and Cyprus. Belarusian ospreys reached the nesting sites on April 9, Markus and Vija on April 13, and Kalle was the last on April 19.

There are two black storks left on the migration map. Oru and Aru, who were equipped with transmitter as nestlings last year, died during the autumn migration before reaching the wintering grounds. Black stork Eedi started his spring migration from Saudi Arabia on March 10 and reached his nesting site in Karula National Park on April 8. Karula, who was equipped with transmitter as a nestling in 2018, wintered on the Israeli-Jordanian border, which is one of the favorite places of black storks. Karula is not yet of breeding age, which is why its journey to the north was somewhat muddled. After arriving to Poland, Karula turned back to the south and moved to Serbia. At the end of April, Karula headed north again and from May 5 has stayed in Courland, Latvia. Whether Karula finds a nesting site there or returns to Estonia, we will hopefully find out next year.

In addition to eagles and black storks flying south for the winter, the migration map also shows the movements of white-tailed eagles. Olev, Pomo, Kelli and Hanna have all been treated and then released from the veterinary clinic of the Estonian University of Life Sciences.

During the breeding season we do not show the locations of nesting birds on the migration map. Autumn migration is expected to begin in early August, with ospreys being the first to start the migration.