The story of this year's black stork camera

The black stork nest camera works, the birds are in place and viewers are plentiful.

LK forum is where you can get an overview of what has happened in the nest this year as well as in previous years. Different observers have described their observations, and added pictures and videos there.

The tracking device of black stork Karl whom we have watched for three years no longer transmits  data since March 29, 2019, when Karl arrived from to .

There was, however, already a second  male (Karl II), whose age and place of birth we do not know, in the nest before female Kati arrived. He visited the nest a year earlier as well but then had to retreat after “the proper” Karl arrived. 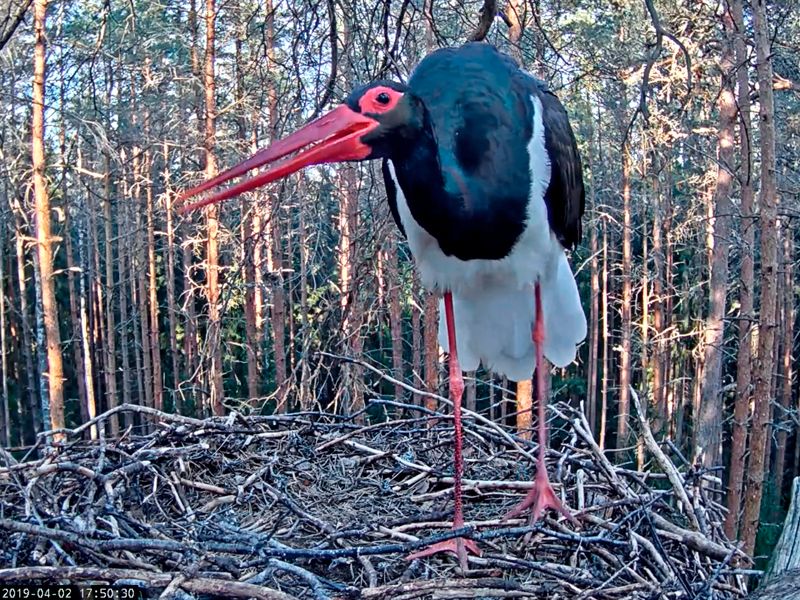 Black stork Karl II on the day of arrival. The nest was empty, but the weather was beautiful. 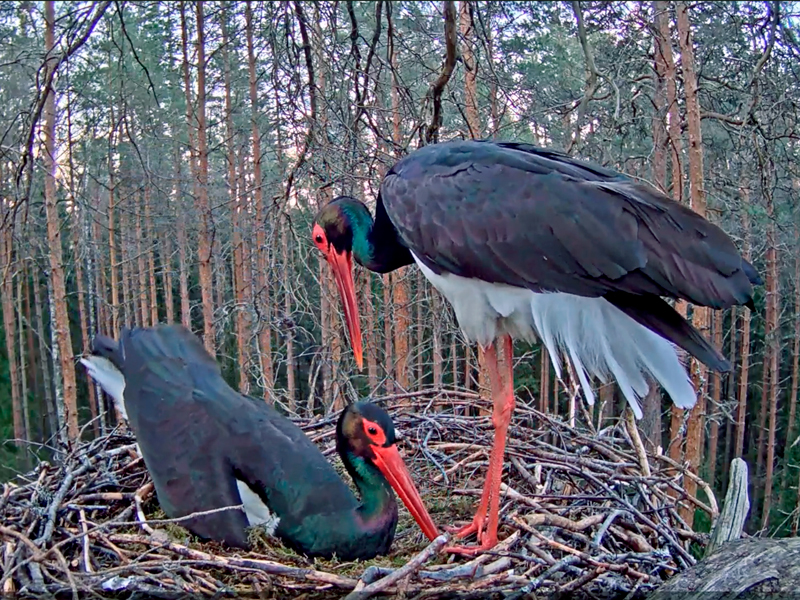 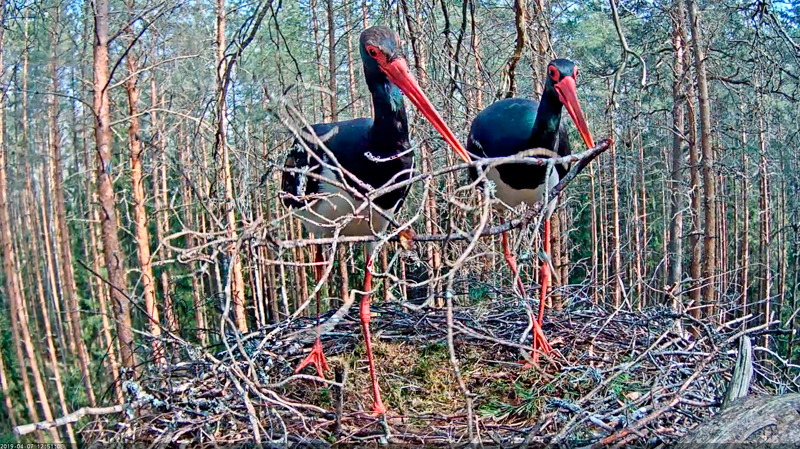 Struggling together for the common home. 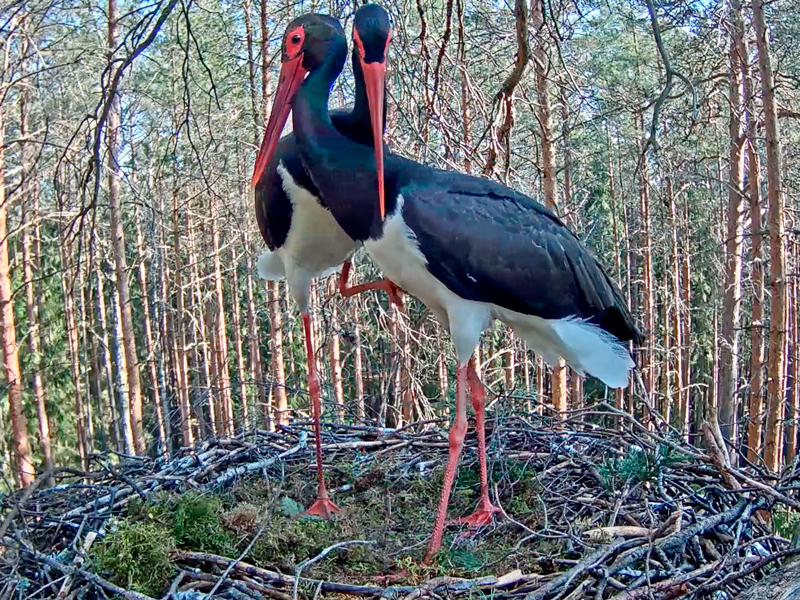 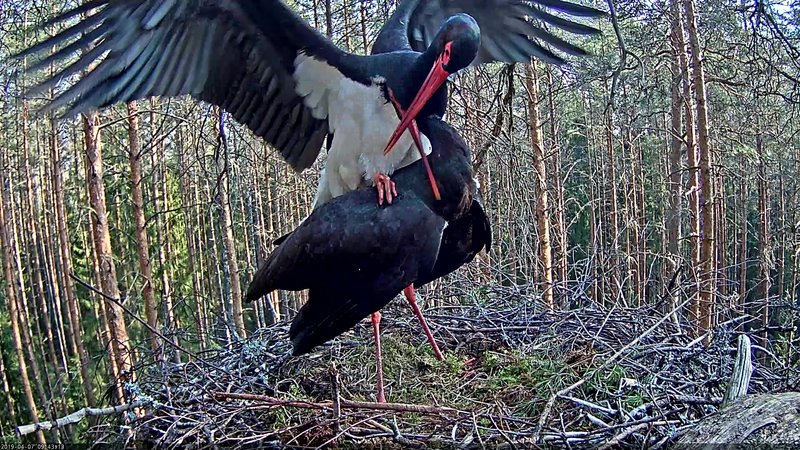 A new generation must also be provided. Webcam image by Liz01, LK forum.

The black stork nest in the can be seen for the fourth consecutive season. About the initial installation of the camera and its pre-history, the ELF voluntary events  page has a series of  images. In  the spring of 2018 the old nest had collapsed halfway, so we built an artificial nest beside it.
. 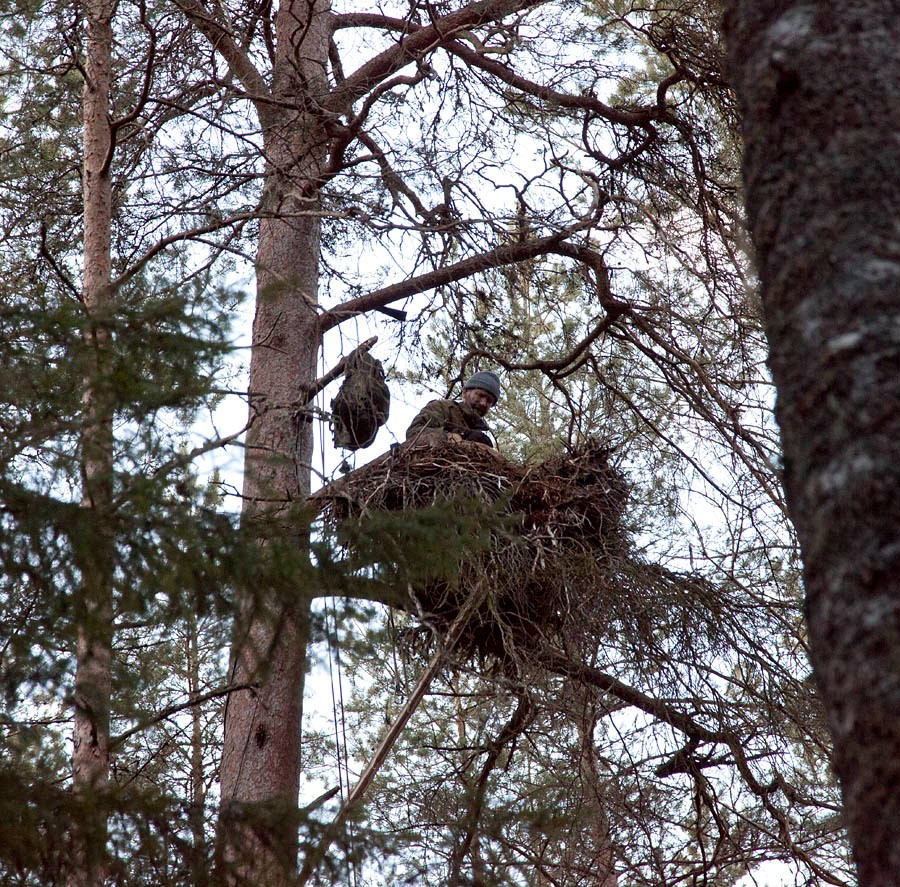 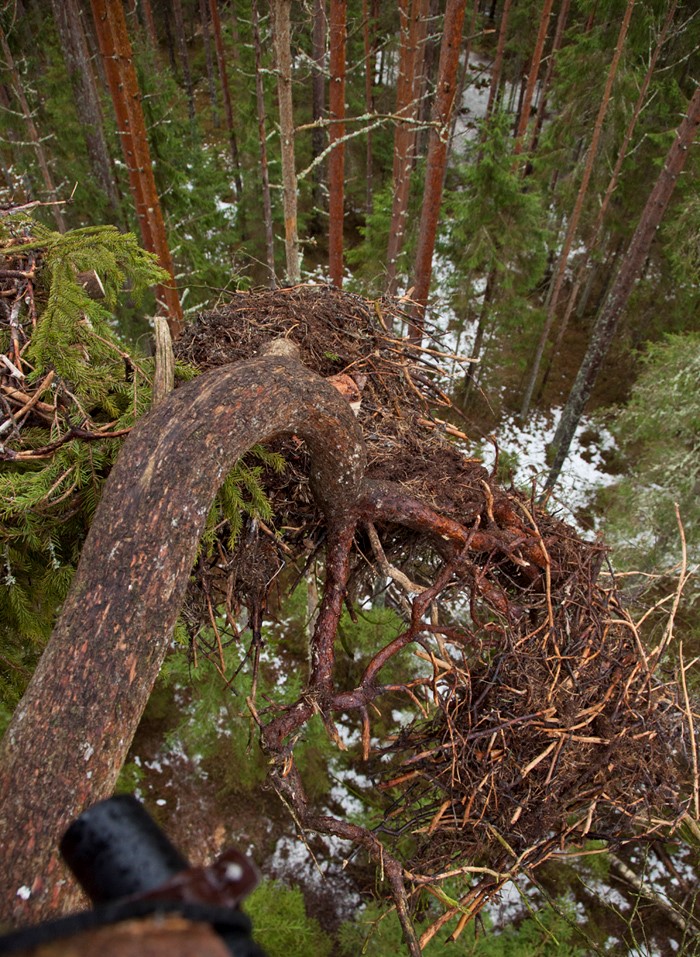 Last year's nest has broken down.

Perhaps the storks themselves would have tried to repair the old nest, but it is not certain that this would have withstood the breeding period. The branch carrying the old nest has dried up and the witch’s broom outgrowth where the nest rests was quite decayed. Part of the material for the new nest could be taken from the old nest, but we also used spruce branches and planks 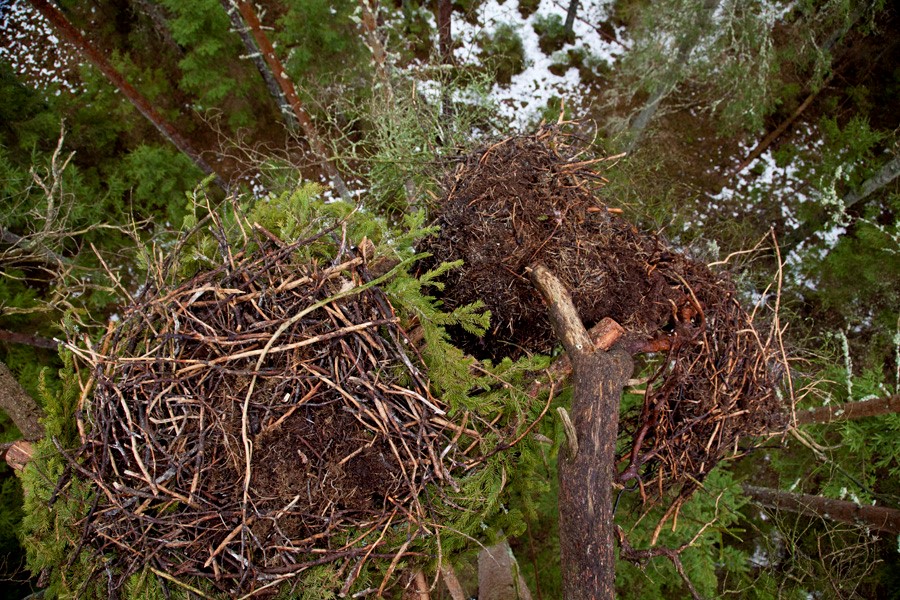 The artificial nest and old natural nest seen from above. Photos by Urmas Sellis

While the camera was being  installed, the camera image was quite straight, but over time the horizon has slipped somewhat out of place. We do not know which attachment causes the yield.

The new male, Karl II, arrived at the nest on April 2, and the female Kati on April 4, 2019.The camera transmission here goes  via a Wi-Fi link from the nesting place directly to the TELE2 mobile station in Antsla, by way of two Mikrotik antennas. Next, the image moves along cables to the EENet server, where the stream is created. Parallel to this, streaming  goes via YouTube. Different users like different formats. It is also known that some re-streamers have used this black stork nest camera. So, for example, the environment OK  states that they had 4 million views on this black stork nest camera in 2017  But we certainly do not know all the re-streamers.

The use of the stream from the nest elsewhere is not prohibited, but please let us know when possible (see contact information  at the end of the page or send a message to urmas (ät) kotkas.ee). Sponsors are also welcome for every camera, since some components have to be replaced every year. There is no project support for this. However, EIC has supported the installation, removal and maintenance of cameras. Last year a special donation campaign was organized by the members of the forum to complement the various cameras.

At the nest, the camera is an AXIS F41 with a microphone made by Omar Neiland. Our black stork camera is mentioned in the 2017 Annual Report of the camera manufacturer AXIS. We hope that our recommendations will be taken in account in the future development of new cameras, in order to give you an even better picture and sound.

People who had watched the black stork nest  (Kati and Karl) in Karula for two years, started a collection  in the autumn of 2017 to provide three fledglings with tracking devices for the 2018 season so that their movement could be monitored after leaving the nest. All three chicks travelled in the right direction, but one of them (Päike) probably perished on crossing the Mediterranean, the second  (Maru) died from a poacher’s bullet in the south of . The third chick (Karula) is still alive at the Jordan River in the . The sender of the bird that died by the Nile came back to us from through colleagues there and the Estonian Embassy. Thus we can use it again. For more information on the young birds' movements, visit the forum.