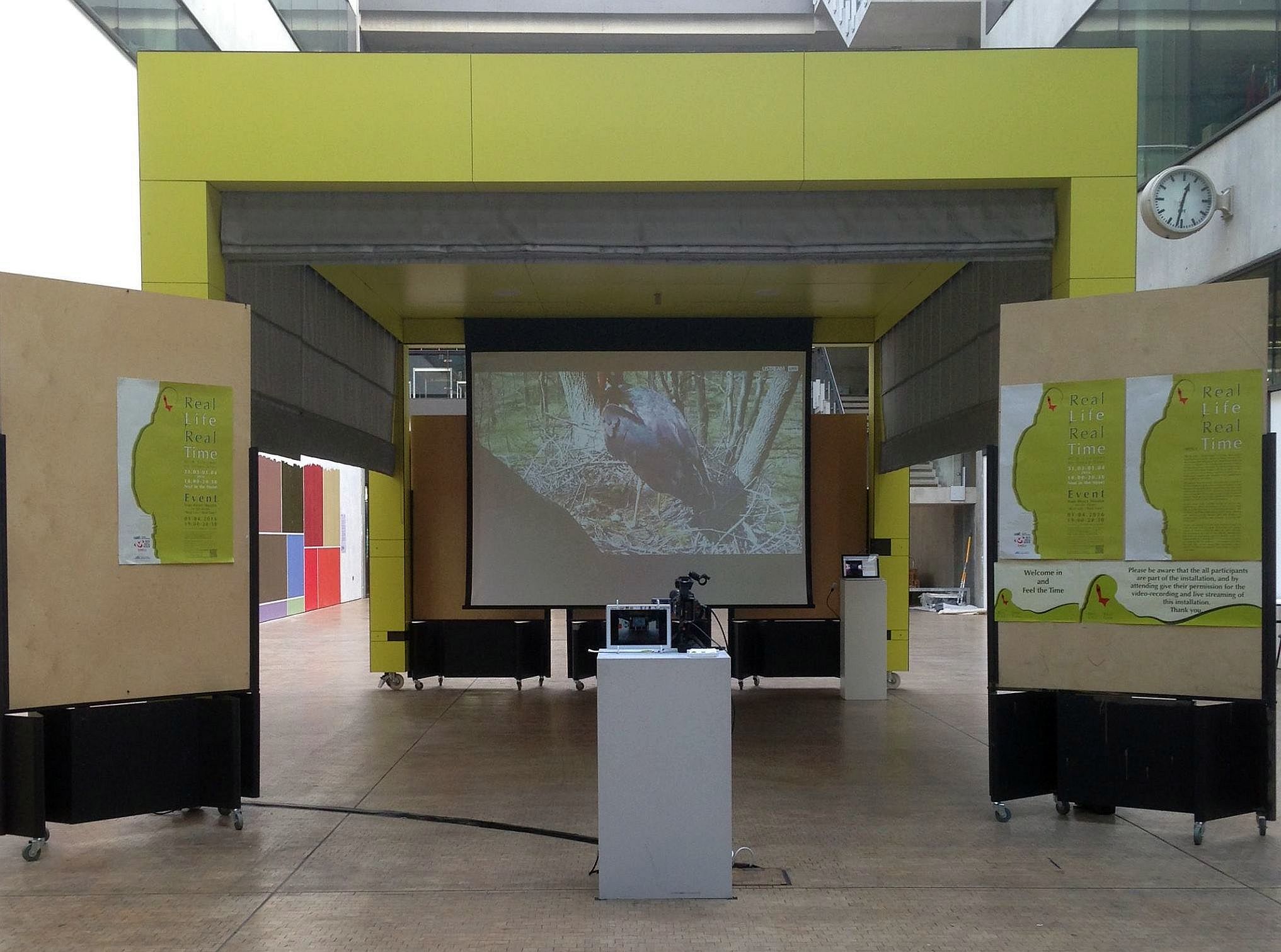 Last week art student Pei-Hsin Chen who installed images transmitted from the black stork camera in a public space in London for six months during the previous stork camera transmission period visited Estonia. Pei-Hsin himself explained the project „Real Life / Real Time“ with a need to show a younger generation, or all Londoners under 50 years, an experience of nature, as urbanised people already have very little contact with anything  that goes on in a forest and know little about it.

Pei-Hsin’s performance-art project showed the camera images from the black stork camera on a large screen in London and simultaneously monitored the reactions of people. The silhouettes of the passers-by appeared on top of the stork camera image with a small delay. The reactions of people and how they were interacting with their own shadows were followed. The project even reached the  Mullen Lowe Nova Awards 2016  nominees, and the author graduated with honours. Initially installation of the large screen had been planned for some highly frequented street area in London but it became clear that the rental cost for one month would not have been realistic. The bird cage in front of Kings Cross Station where all the appliances as well as the large screen would have fitted would have required finding a very generous sponsor to support his graduation work. So the stork camera was instead set up in an indoors passage in the foyer of the school. The passers-by began to engage themselves in what happened in the stork nest and their emotions were recorded as ”shadow theatre” that was enacted in front of the camera and screen. 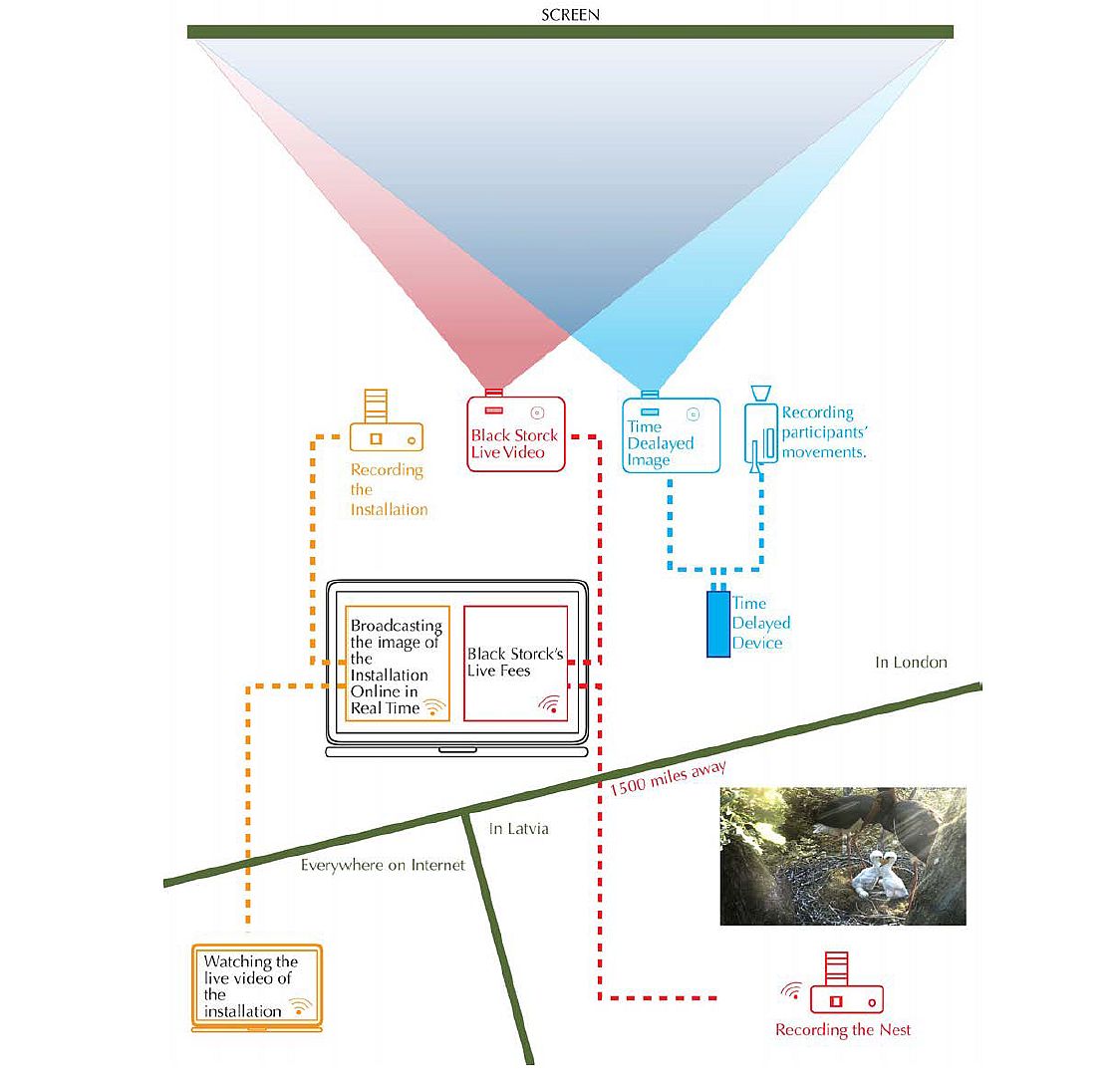 This year Pei-Hsin plans to make a similar installation in Taiwan. For this a historic house from the Japanese occupation era, near a much frequented market, has been chosen. The reason as Pei-Hsin himself says is the conviction that citizens of a great city will see more of nature thanks to this project and take an interest in what happens in a forest. From a complete alienation perhaps some people can be brought back to become nature friends who already are below 10% of the population.

Taiwan has many rare birds due to the special location of the island but many Taiwanese know very little about them. Neither do people know where these birds live and how they live. The black stork camera brings another far-off and exotic bird closer, whose life from the egg-laying to raising the chicks can be followed in the Loodukalender camera during half a year.

„Two years ago a Siberian white crane stayed in Taiwan; it was a rare visitor here,“ Pei-Hsin Chen said, “on migration from the South it evidently stopped for some reason in the wetlands in the northern part of Taiwan and decided to stay there for one and a half year.”

It was a local media event since such a rare white bird had not been seen staying on the island. TV, photographers and simply interested people visited the place. Pei-Hsin presented Looduskalender with a book of drawings with a picture story of this stork. At the roadside signs had even been set up that warned of the stork and drew attention to it.

While people initially knew nothing about the bird from Siberia heading towards south, nor about how to behave near a wild bird, then awareness has grown by now.

„With the presentation of the black stork living far away in the Baltic countries people have started to be more interested in nature and to care about it,“ Pei-Hsin Chen believes, „in the same way as the appearance of the stork in their own neighbourhood made them interested in the world outside the city.“

Below is a  video summary of the project, that was also published in Delfi.