Roe deer and traffic in Estonia 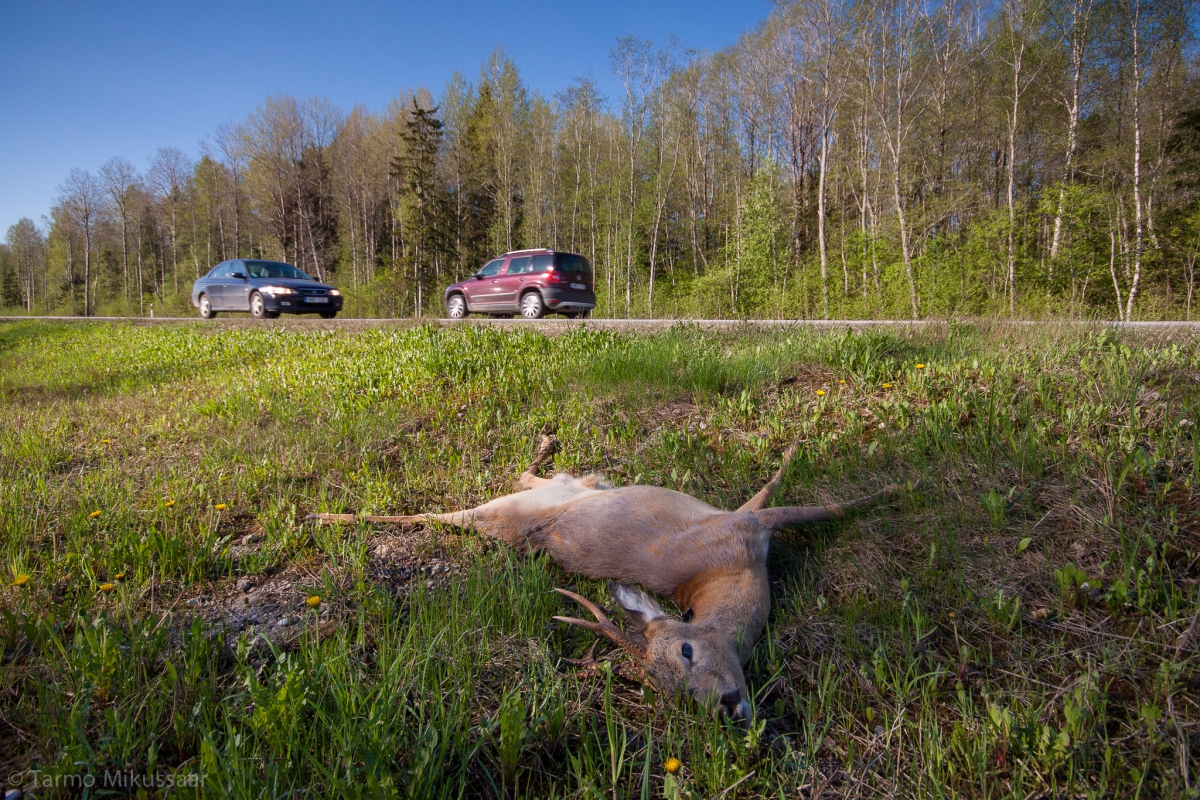 Among the large game animals the roe deer is the most frequent victim in traffic in Estonia. Car drivers should be particularly attentive in the Tiskre area and around the Jägala river bridge where a road with dense traffic and a traditional roe deer path coincide.
Photo: Tarmo Mikussaar

Although Estonia has more nature and a smaller population density in comparison to other European countries people still will not keep in one place but move around. Neither do the wild animals stay in one place but wander around, among them the roe deer, among the most numerous in Estonia. They move between summer and winter areas, in search of food, in the heat period, and on widening their habitats as well as on becoming independent. So the paths of roe deer and humans cross quite often and when a human with a motor vehicle and a roe deer on foot meet it is clear that due to the different speeds someone will obviously be hurt.

Among traffic accidents involving animals larger than a fox most accidents have been noted for roe deer, nearly 1500-2000 cases per year. Roe deer are generally tolerant regarding habitats and in Estonia live in forests as well as a diverse cultural landscape. Because of this their abundance is higher compared to other game animals and so they also occur most frequently in traffic accidents. The  peak risk periods in traffic, when there is the greatest probability to meet them on a country road, are early mornings with long twilight and evenings in the period between May to September – a couple of hours before sunrise and a couple of hours after sunrise, and a couple of hours before until a couple of hours after sunset. The activity of roe deer increases significantly during the rut period – July to August. It should be kept in mind that as a typical cloven-footed animal our animal of the year moves in flocks whose members follow the leader animal, keeping as close as possible to it. Thus when a roe deer jumps on to the road a driver should be particularly cautious because very probably another and a third and maybe even more animals follow from the thicket. Places where the greatest number of accidents with roe deer have happened in Estonia are on road segments with a high traffic density and where the surrounding landscape has already been strongly influenced by humans. Such locations near Tallinn are for instance on the Rannamõisa road near the Tiskre community, where on one side on the road is a tantalising feeding area for the deer – fields overgrown with grass -, on the other side already buildings rising on the former beach plain. The roe deer however have an ancestral  memory that along here one could easily move along boggy beach plains with fat grass to the Kakumäe forests and back again. Another segment with a similarly high number of accidents is on the Tallinn-Narva road at Jõelähtme, near the bridge across Jägala river, where an historical roe deer path along the banks of the river in a north-south direction is known. Man has crossed this corridor with a heavily trafficked road. In most cases accidents involving roe deer are comparatively easy to avoid  but to achieve this road constructors as well as motor vehicle drivers must behave properly. Builders should create riskless passages alongside the traffic for the roe deer;  suitable solutions are ecoducts or ”green bridges”. Drivers should be required to keep to speed limitations much more than at present, avoid driving at dusk and the dark hours and be particularly observant in areas with traffic signs warning of animals on the road.

Map application of road accidents with animals in Estonia: https://www.mnt.ee/et/tee/elusloodus