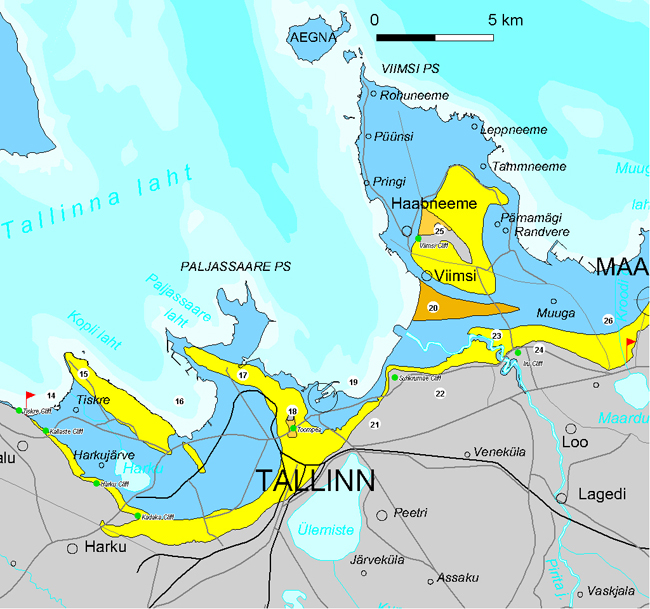 Tallinn Klint encompasses in a beeline about 30 km between Kallaste Cliff and Maardu Klint Bay. Measured along the course of escarpment lines on the klint bays deeply incised into bedrock (mostly Cambrian sandstones and clays) and on the klint islands, this klint section is nearly 90 km long. The klint section is unique first of all by Suur-Tallinn Klint Bay with the labyrinth of its buried ancient valleys, klint peninsulas, capes and islands. Suur-Tallinn Klint Bay has its geographic equivalent in Tallinn Bay, which penetrates in an arc shape up to 7 km long and 18 km wide into the North Estonian Limestone Plateau in an area between the Suurupi Klint Peninsula (Kallaste Cliff) and the Lasnamägi Klint Plateau (Suhkrumägi Klint Cape). 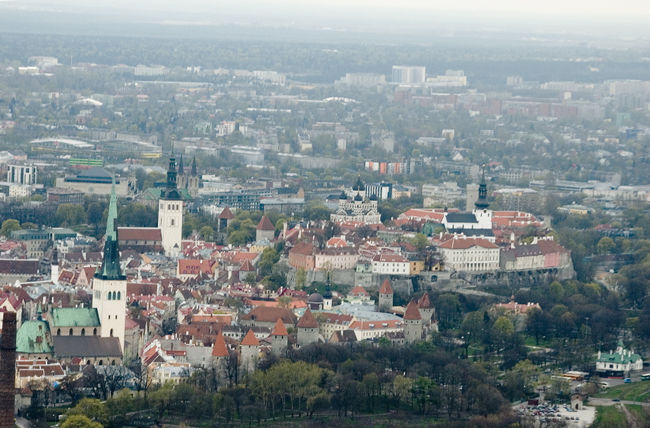 14. Harku Klint Bay is incised app. 10 km long and up to 3 km wide into the limestone plateau in northwest-southeasterly direction between the Suurupi Klint Peninsula (Kallaste Cliff) and Kakumägi Klint Peninsula. The klint bay cuts into the crystalline basement down to app. 140 m bsl in its deeper part (near the mouth of Tiskre Stream) but its structures are mostly buried and therefore hardly traceable in the topography. Lake Harku lies more or less in the centre of a klint valley extending roughly up to Kadaka Street in Tallinn. The klint bay itself continues also in the sea, at the bottom of Kakumägi Bay. The limestone coast in the southwestern part of the klint bay is differentiated into Rannamõisa, Tiskre, Kallaste, Harku and Kadaka Cliffs.

15. Kakumägi Klint Peninsula lacks a limestone cover and protrudes up to 7 km long and 0.5–1.5 km wide northwestward at northeast of Harku Klint Bay. The Quaternary deposits here are underlain by Cambrian sandstone. Kakumägi Klint Peninsula continues at the sea bottom as an over 2-km-long ridge of Cambrian rocks (sandstone, blue clay). Also the boulder-rich moraine ridge running across the Veskimets Forest (the territory of Tallinn Zoo) follows the course of Kakumägi Klint Peninsula. In the northeast, the klint peninsula is bordered for nearly 5 km by a 5–10-m-high sandstone escarpment (Kakumägi type). At the tip of the klint peninsula the escarpment is retreating in places at a rate of 10 cm per year. In strong storms it has retreated by even more than a metre at a time.

At Rocca al Mare, in the southeast of the klint peninsula, lies the Estonian Open Air Museum. To the north of the latter, the escarpment has been edged with a protective wall to prevent abrasion. 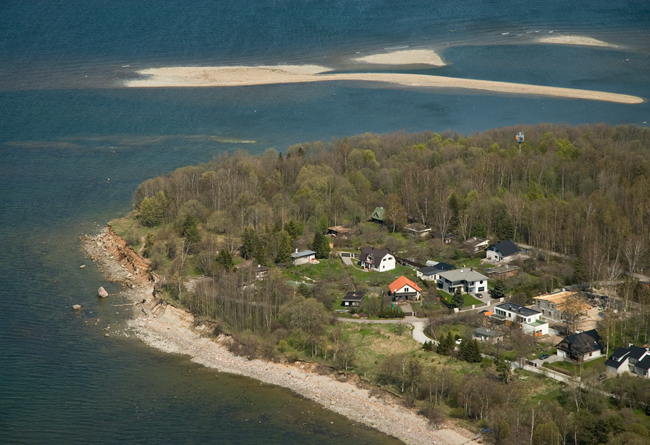 Tip of the Kakumägi Klint Peninsula.

16. Kopli Klint Bay starts from the south of Tallinn near Liiva Cemetery and runs from there across Lilleküla (Kristiine City District), Merimetsa (Stroomi Beach) up to Kopli Bay, penetrating over 10 km long and up to 3 km in wide into Cambrian sandstones and clays. Kopli Klint Bay is bordered in the southwest by Kakumägi Klint Peninsula and in the northeast by an up to 100-m-high ridge of Cambrian sandstones and clays – Kopli Klint Peninsula, which runs in the direction of Cape Kopli.

Kopli Klint Bay is up to 130 m deep at mouth and buried under Quaternary deposits (sands), thus being hardly traceable in the topography.

On the northeast coast of Kopli Klint Bay lie the Vene-Balti (“Russian-Baltic”), Bekkeri and Meeruse Ports. These were established in 1912–1917, when Tallinn became the main base of Russian navy and the establishment of shipyards started here so as to compensate for the severe losses suffered by the Russian navy in the Russian-Japanese War. 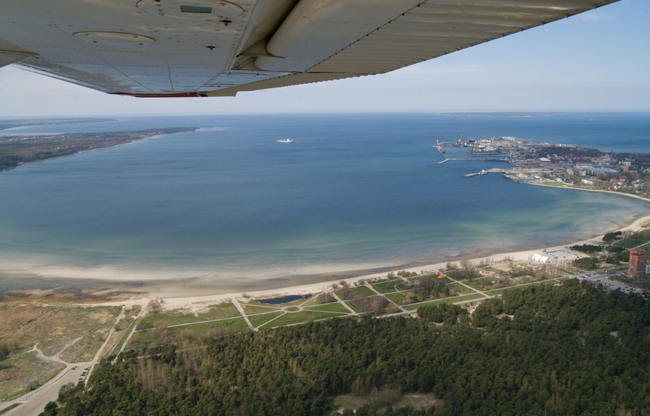 17. Kopli Klint Peninsula, the nearly 8-km-long and 1–2-km-wide ridge of Cambrian sandstone arching northwest across Toompea Klint Island, starts from the outflow of Lake Ülemiste. The ridge is mostly buried under sand and therefore not traceable in the topography despite its remarkable height (40–100 m) but the outlines of the ridge can still be seen in the rise of land surface in the direction of the tramway running toward Kopli from the Balti Railway Station and in the imposing Toompea Klint Island on top of the ridge. On the northeastern slope of the Kopli Klint Peninsula lie a number of ports (north to south): Katariina Quay, Paljassaare, Hundipea, Miinisadam, Peetri, Lennusadam, Kalasadam, Patareisadam, Vanasadam. 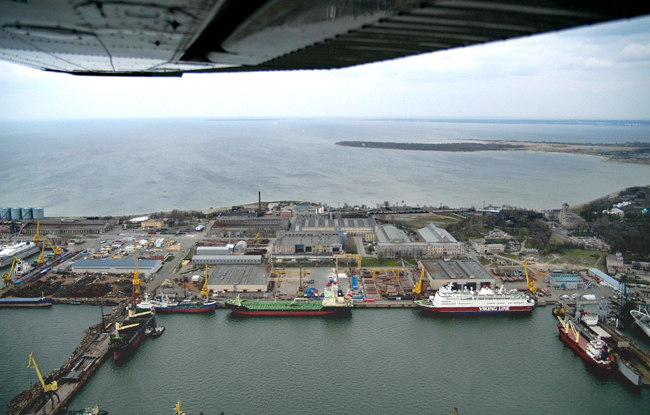 Tip of the Kopli Klint Peninsula.

18. Toompea Klint Island towers on the top of the Kopli Klint Peninsula. This is the historical centre of Tallinn. The app. 7-ha  (400 x 250 m) Toompea Klint Island, which lies app. 1.5 km northwest of the North Estonian Limestone Plateau, is connected with the latter by an up to 0.5-km-wide gentle-sloped sandstone ridge. In the west, north and east, the klint island is bordered for 1.5 km by an up to 25-m-high escarpment, which exposes rocks from Ordovician limestone to Cambrian sandstone. The southern slope of the klint island runs roughly along the line of Lindamägi Hill and Harjuvärava Hill and is gentler-sloped and buried.

Toompea Klint Island emerged from the Baltic Ice Lake about 10 000 years ago and human settlement reached this area 5–6 thousand years ago. About 3000 years ago, ancient Estonians arriving here from Iru Hill Fort established their fort Litna or Lidna here (Kolõvan in Russian chronicles; Lindanäs or Lyndanise in Viking tales). 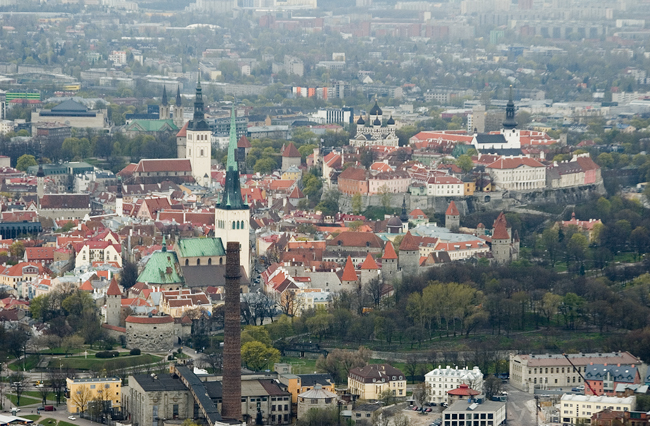 19. Ülemiste Klint Bay (app. 3 km wide at mouth and up to 80 m deep) runs across Tallinn Port toward the sea, being bordered by the Kopli Klint Peninsula in the west and the Lasnamägi Klint Plateau in the east. The klint bay is buried and therefore not traceable in the topography. The Härjapea River, which flew along the bay in earlier times, constituted an axis of the klint bay. In 1988, the short (up to 2 km) rivulet had 8 watermills for grinding flour and gunpowder, for sawing boards and forging copper (a copperforge). The watermill of St. John’s (Jaani) Almshouse on the Härjapea River is referred to in 1279 as a mill “belonging to the almshouse already since ages long past”. Today only the names Jõe Street (“River Street”) at the then lower course of the river and Tiigiveski Park (“Pond Mill Park”) carry a memory of the Härjapea River. 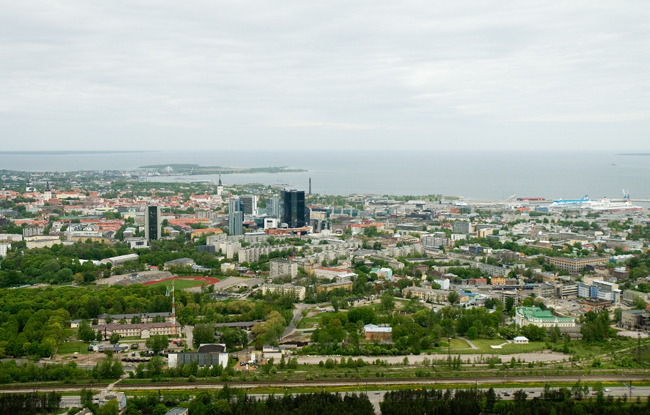 Ülemiste Klint Bay is running here towards of Tallinn Port. 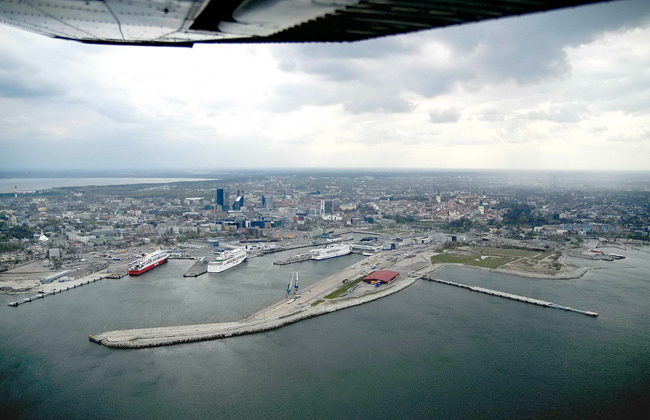 20. Merivälja Klint Bay begins near the garden suburb of Muuga and runs for 5–6 km in westerly direction more or less parallel to the escarpments bordering the Lasnamägi and Iru Klint Plateaus. The klint bay is app. 2 km wide at mouth (on seacoast at the mouth of the Pirita River) and cuts up to 150 m deep into bedrock up to the crystalline basement. Merivälja Klint Bay is mostly buried and thus not traceable in the topography, with only the escarpments bordering the Lasnamägi and Iru Klint Plateaus on the one hand and Viimsi Klint Island on the other hand being better distinguishable against this background. The cemeteries of Metsakalmistu and Pärnamäe and partly also the suburbs of Mähe and Merivälja are located above Merivälja Klint Bay. 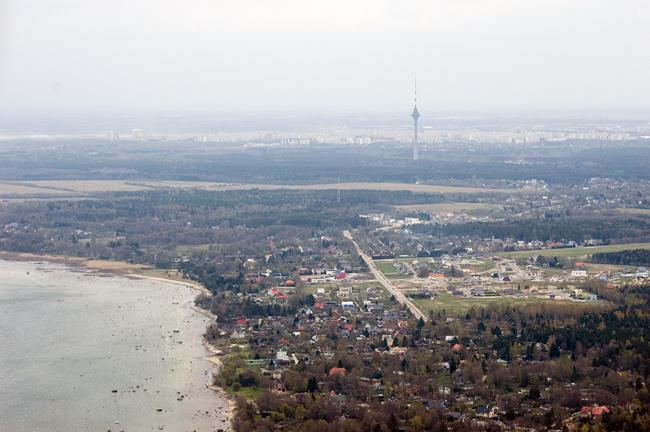 21. Ülemiste Klint Plateau encompasses more than 12 km of the North Estonian Klint between Vana-Mustamäe (Tähetorni Street) and Tartu Highway. Buried under sand but still somewhat traceable in the topography, the buried escarpment runs across Nõmme, Rahumäe and Järve City Districts and Järvevana Street up to Tartu Highway. The sandy ridges accumulated at the edge of the klint plateau have played an important role in the formation of Lake Ülemiste (area 9.6 km2, depth up to 6 m). 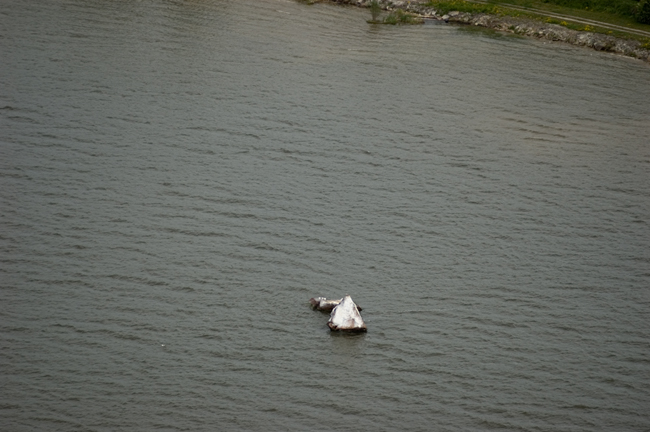 22. Lasnamägi Klint Plateau encompasses app. 6 km of the North Estonian Klint in Tallinn between Tartu Road and the Pirita Klint Valley. The limestone plateau lies at 40–52 m asl here. The escarpment bordering the plateau turns up to 2 km northwest here, forming in its topmost part the small Suhkrumägi Klint Cape, which is up to 1 km wide and protrudes 0.5 km from the klint line. Centuries-long limestone mining has left behind nearly 1.5 km2 of old limestone quarries on the Lasnamägi Klint Plateau.

The klint plateau is bordered in the north for app. 10 km by a 20–30-m-high Cambrian-Ordovician escarpment, which is partly buried or flattened but mostly still traceable in the topography, being better traceable on Suhkrumägi Klint Cape in the area east of Lauluväljak – the Song Festival Grounds. Most of the limestone plateau named Paevälja (“Limestone Field”) on top of Suhkrumägi Klint Cape is part of the old limestone quarry of Lasnamäe. This is where also the Lasnamägi building limestone, the most popular building stone in Tallinn, has got its name from. 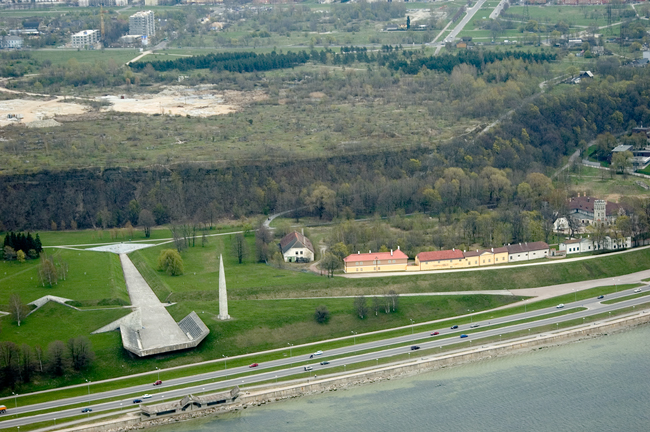 23. Pirita Klint Valley, which separates the Lasnamägi Klint Plateau from the Iru Klint Peninsula, is nearly 10 km long and cuts up to 25 m deep into bedrock. Half a kilometre southeast of Vana-Narva Road, in a meander of the Pirita River, which breaks through the edge of the klint plateau here, there is Iru Fort Hill. This was the location of a fortified settlement of ancient Estonians in the 7th–5th century BC and in the 5th–10th century there was also a fortress here, which was burned down at least five times before its inhabitants moved finally to Toompea Klint Island. 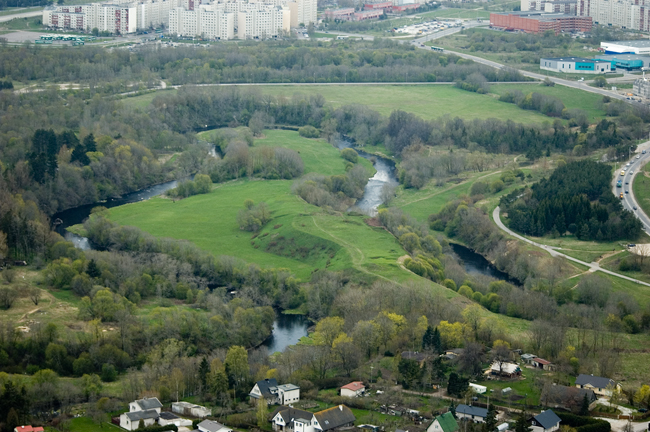 24. Iru Klint Plateau lies 35–40 m asl and encompasses app. 4 km of the North Estonian Limestone Plateau between the Pirita and Kroodi Valleys. The klint plateau is bordered in the north by a partly buried and somewhat flattened but still rather well traceable up to 30-m-high Cambrian-Ordovician escarpment and in the east by Muuga Bay. Most of Iru Klint Plateau is occupied by a harsh industrial landscape and the Iru Thermal Power Station in the western part of the plateau. 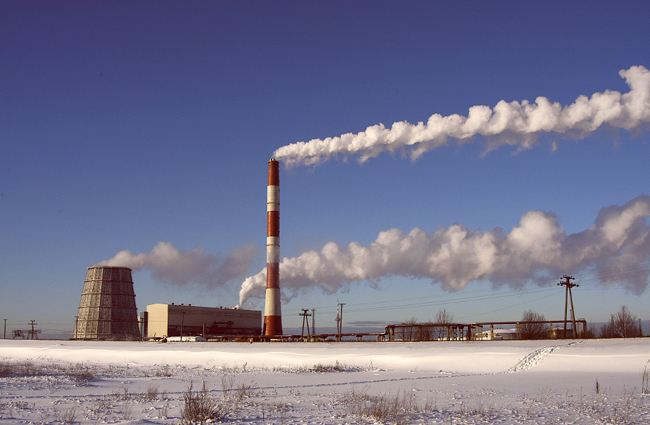 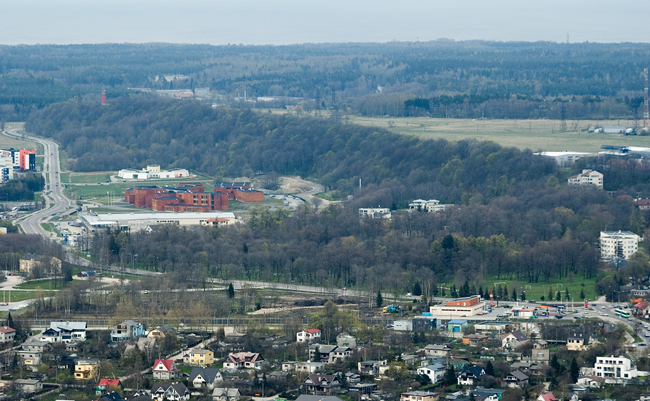 26. Muuga Klint Bay is as if a continuation of Muuga Bay on land and on the sea bottom. A ravine emanating from Lake Maardu – the Kroodi Valley – debouches into the bay. In 1893, the landlord of Maardu Manor had a ditch dug to the sea from Lake Maardu and a sluice was built for regulating the water level. Someone opened the sluice the following year and the released water broke the dam and eroded a nearly 2-km-long and 10-m-deep ravine. The dam and Lake Maardu were restored in 1939. On the southern bank of Muuga Klint Bay there is the biggest (up to 80% of the turnover of Estonian ports) and deepest (aquatorium up to 18 m deep) port in Estonia – Muuga Port. 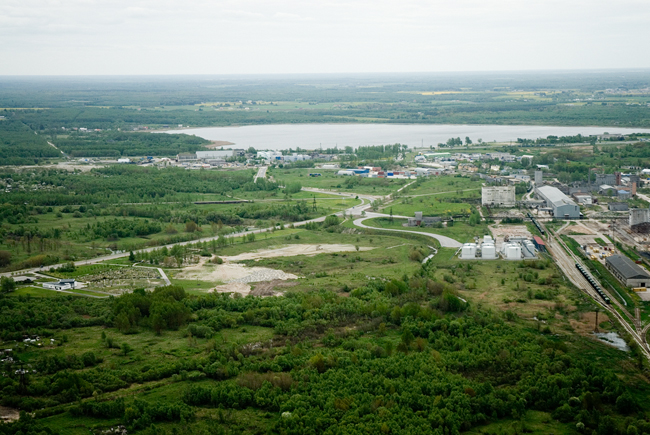