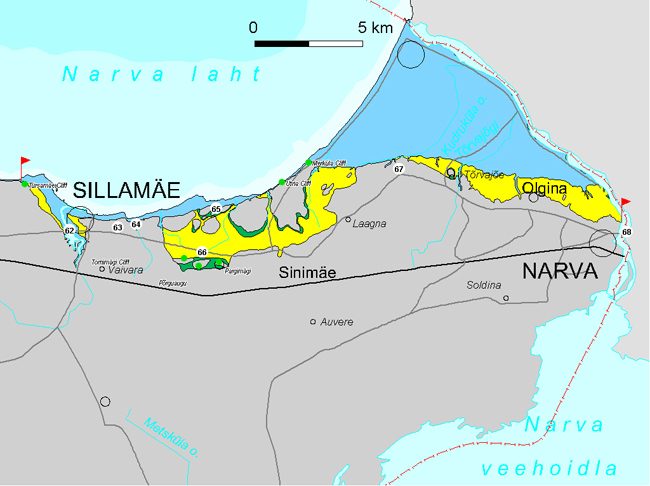 Vaivara Klint section encompasses app. 15 km of the North Estonian Klint in Ida-Viru County between Sillamäe and Meriküla. The klint section is characterized by an escarpment of densely jointed rocks and by specific tectonic-glaciogenic structures. 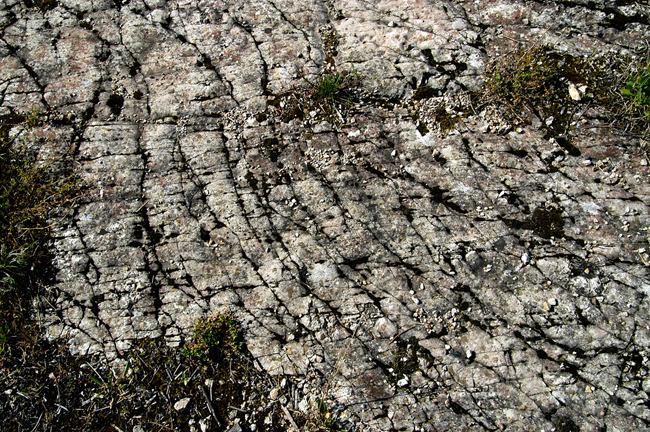 62. Sõtke Klint Bay cuts into the klint plateau for over 4 km in southwest-southeasterly direction at east of the Päite Klint Plateau. The klint bay continues into the short (up to 1.5 km) but deeply and steeply incised Sõtke Valley. Both the Ordovician (limestone) escarpment and those of the phosphorite complex and Cambrian I (sandstone) differentiate on the slopes of the klint valley. The bottom of the klint bay lies at app. 10 m asl, descending down to 10–20 m bsl on the western side of the klint bay. Langevoja Stream descends into the klint valley from the west over the 5.5-m-high Langevoja Waterfall located in an app. 300-m-long and up to 15-m-deep canyon.

On the banks of Sõtke Klint Bay lies the town of Sillamäe. Sillamäe Manor and its surroundings became valued as a holiday resort among the intellectuals of St. Petersburg at the end of the 19th century. In 1928, an oil shale processing factory and a power station were established on Türsamägi together with a small harbour on the coast. These were all destroyed during World War II. The years 1946–1952 were a gloomy period marked by prisoners and the nuclear bomb: a secret plant for the production of uranium oxides was built here with slave labour of over 7000 war prisoners from Estonia, Latvia and Lithuania. The plant was initially operating on Dictyonema shale extracted from the Päite Klint Plateau but since the 1960ies it switched to imported concentrated uranium. Reprocessing of uranium residues at Sillamäe ceased in the 1980ies and the plant, the predecessor of the present Silmet Ltd., started to produce rare metals and earth metals.

In 2005 the Port of Sillamäe (SILPORT) was opened. This port, which is located only 25 km from the EU-Russian border, is the easternmost deep-sea port of the EU in the Eastern Baltic. 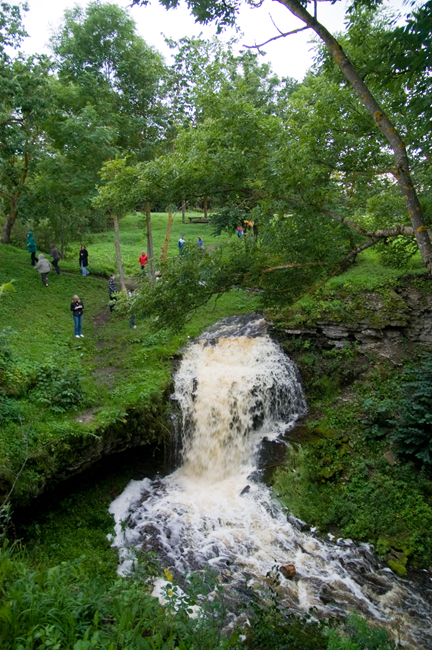 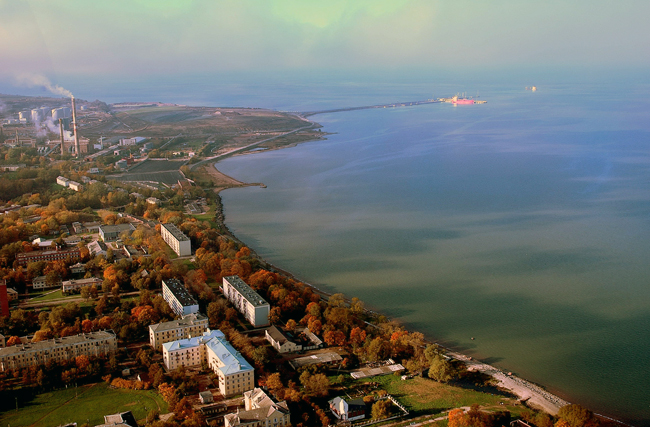 63. Kannuka Klint Peninsula (about 3 km2) protrudes 1.5 km from the klint line on a 2.5-km stretch between the east coast of Sõtke Klint Bay and west coast of the Perjatse Klint Valley. The limestone plateau here lies at the level of 29–30 m asl. A district of Sillamäe Town built in the 1980ies occupies the western part of the peninsula. 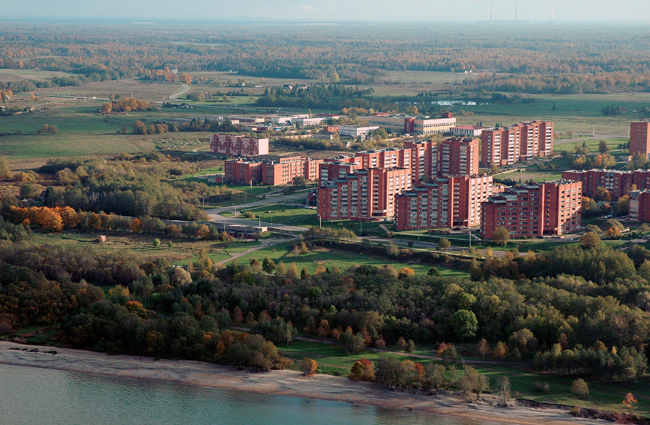 64. Perjatse Klint Cape (app. 1.5 km2) protrudes up to 1.5 km northward between the Perjatse and Pimestiku Klint Valleys. The limestone complex covering the klint cape rises strongly toward the south  (27–32 m asl). The northern part of the klint cape is bordered by a two-step, partly buried strongly deformed klint.

Pimestiku Klint Valley penetrates into the klint plateau in the area between Perjatse Klint cape and Pimestiku Klint Island. The short (up to 700 m) steep-sloped valley is up to 20 m deep at mouth and cuts through both the limestone complex and the phosphorite complex. Along the eastern bank of the klint valley ran the Swedish Fort – a zone of earthen fortifications starting from the Vaivara Sinimäed, which was established by order of Peter the 1st during the Great Northern War. 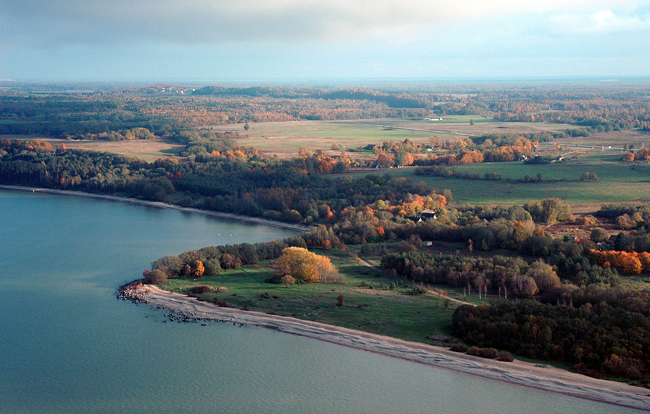 65. Pimestiku Raft Islands – giant limestone blocks and strongly deformed Cambrian blue clay or sandstones between them – occupy an app. 10-km area between Pimestiku Klint Valley and Mereküla. The six raft islands, whose limestone plateaus lie at the level of 25–30 m asl, are covered with an about 5-m-thick limestone complex and separated from one another by blue clay diapirs. On the eastern border of the Pimestiku Raft Islands lay the Tannenberg Defence Line established by the Germans during World War II.

Suur-Pimestiku Raft Island (app. 1.5 km2) is the westernmost of these islands and best distinguishable in the topography. It is bordered from the north for over 1 km with an up to 20-m-high escarpment consisting of densely jointed limestone.

Udria Raft (app. 3 km2). The densely jointed limestone plateau of the raft lies at 24–38 m asl, being higher in the central part. The raft is bordered in the north by an up to 20-m-high escarpment. Near the mouth of Udria Stream there is the easternmost place of the Baltic Klint where the klint is still abraded by the sea: east of Udria Stream the Baltic Klint withdraws decisively and finally from the sea. Two troop landings took place on Udria Cliff during the last century: in January 1919, Estonians and Finns made a successful landing into the rear of Russians and in February 1944 Russians made an unsuccessful landing into the rear of Germans. 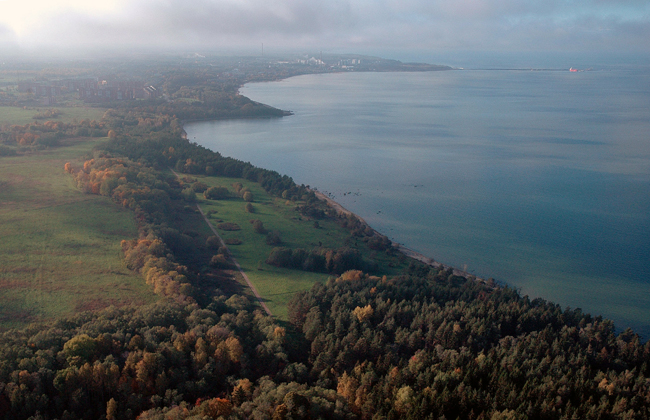 66. Vaivara Sinimäed (“The Vaivara Blue Hills”) constitute an up to 3-km-long and about 300-m-wide chain of three giant block cored ridges (Pargimägi, Põrguhauamägi, Tornimägi). The hills lie 2.5 m south of the seacoast, i.e. of the escarpment bordering the Pimestiku Klint Islands. The chain of the east-west trending elongated giant blocks (rafts) towers up to 50 m (40 m on an average) above the surrounding area. According to a hypothesis, the Vaivara Sinimäed have emerged by action of upward squeezing (diapiring) of blue clay within a tectonic fault zone under the pressure of a 2–3-km-thick continental glacier. In addition to the Sinimäed, such uplifts are found also near Laagna and near St. Petersburg (in the hills of Krasnoye Selo, Duderhoff, Kirhoff, etc.). 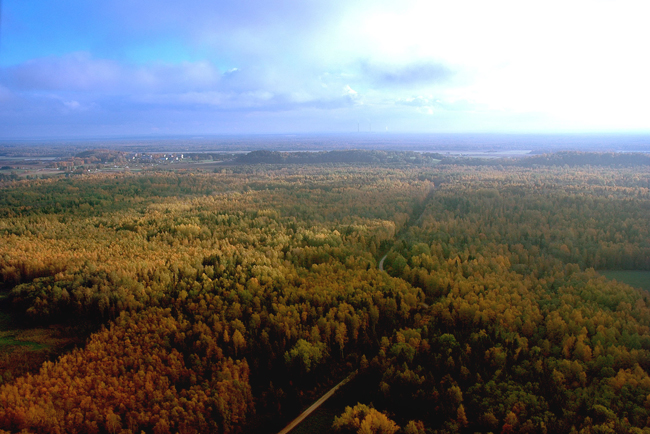 Tornimägi (“Tower Hill”), the westernmost hill of the chain of the Sinimäed, is cored by a narrow (up to 200 m), up to 800-m-long, app. 10º southward dipping and up to 35-m-high (with the crest at the level of 70 m asl) giant block (raft). The northern slope of the hill is bordered by an up to 35-m-high precipice. In the eastern and western end of Tornimägi the rocks are stronger deformed, broken into smaller blocks, strongly sloping (30–90º) and partly even pressed into folds.
Tornimägi got its name after a big watchtower built here by order of Peter the 1st during the Great Northern War (1704). During World War II it was known among the military as Elevation 69.9 m. 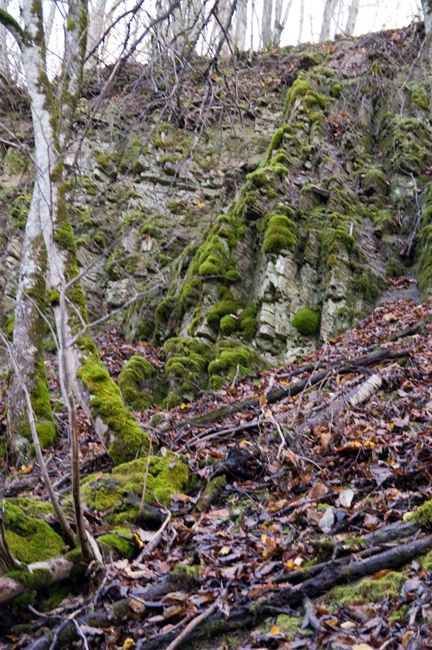 Põrguhauamägi (“Hell Grave Hill”), over 1 km in length, is separated from Pargimägi and Tornimägi by up to 200-m-wide saddles descending down to the level of 55 m asl. The eastern and western parts of Põrguhauamägi extend to 81 m and 83 m asl, respectively. Põrguhauamägi contains several smaller (up to 100 m diameter) and stronger deformed blocks than those in Pargimägi and Tornimägi. On top of the hill there is an app. 250-m-diameter and up to 20-m-deep oval depression – Põrguhaud (“Hell Grave”). The southern slope of the depression is an outcrop of a larger and up to 60o southward-dipping block. Põrguhauamägi, called Grenader Hill by the Germans who fought in defence here, carried the main weight of the battles of end of summer 1944. 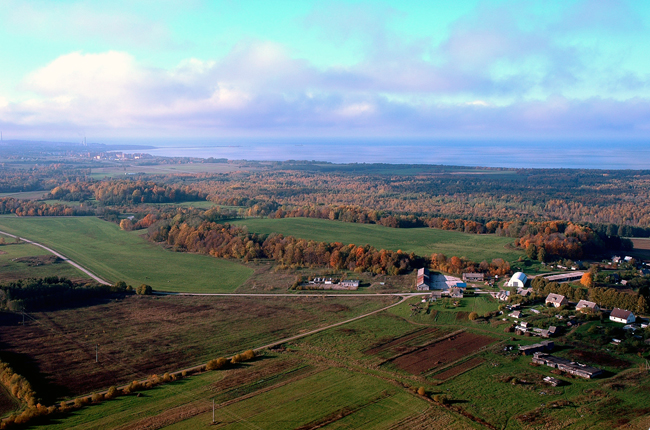 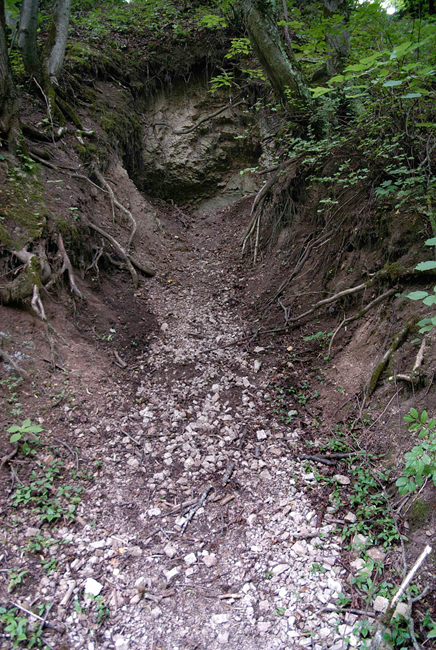 Pargimägi (“Park Hill”, also Lastekodumägi – “Orphanage Hill”) is the easternmost and highest of the Sinimäed (up to 40 m from the foot; 84 m asl at the top). Pargimägi is cored by an up to 300-m-long, app. 50 m lifted and 20o southward sloping monolithic giant block of limestone.

The casemats visible on the northeastern slope of Pargimägi were established in 1916 by Austrian-Hungarian war prisoners. Pargimägi was an important node in the Tannenberg Defence Line established by Germans in 1944. The hill got its name after the park that surrounded the wooden manor house of baron Korff that once stood here. The name Lastekodumägi comes from the orphanage located in the manor house prior to World War II (got destroyed in the battles of summer 1944). 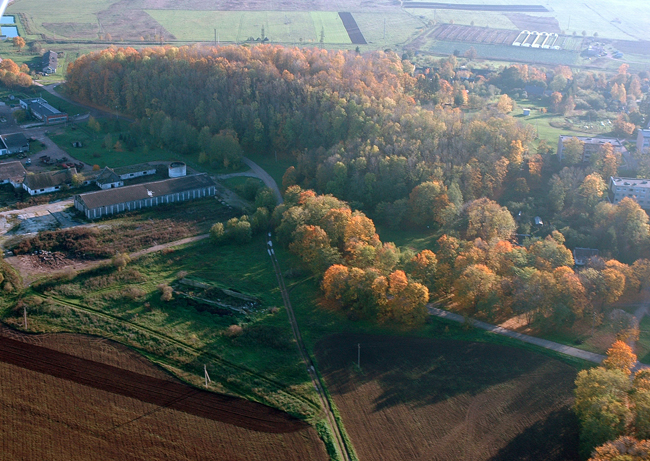 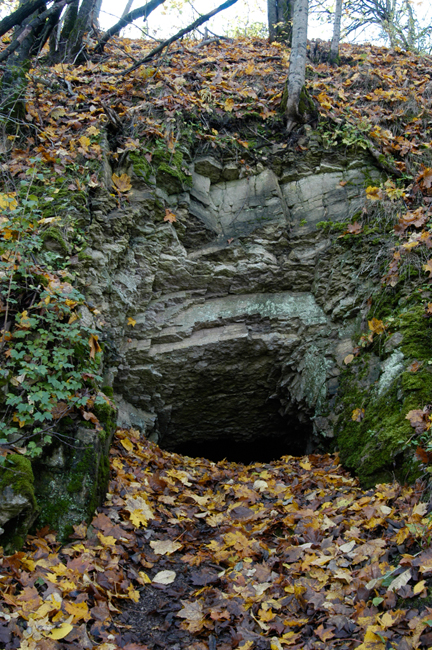 The outcrop of the raft on Pargimägi.

67. Puhkova–Olgina Klint Plateau is app. 15 km long, starts from the Meriküla Cliff and extends up to Narva Valley. The eastward shallowing (30–25 m asl) klint plateau is bordered by a gentle-sloping, partly buried escarpment. On the Sõmerkalda and Laagna Rafts the limestone plateau is raised up to 40 m and more asl.

Orasoja Canyon (up to 500 m long and nearly 20 m deep at mouth) cuts sharply into the northern edge of the Puhkova–Olgina Klint Plateau at a few hundred metres west of Vodava crossroad. The 1.1-m-high Orasoja Waterfall is located here. 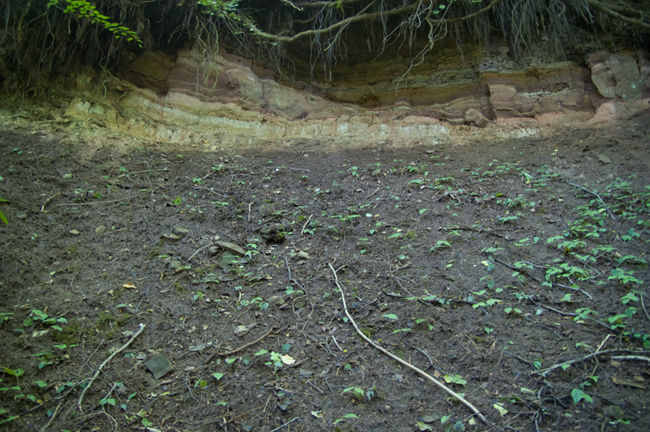 The stratotype of the Orasoja Member.

Tõrvajõgi Canyon cuts up to 1 km long into the klint escarpment immediately north of Tallinn-Narva Road and the over 2.5-m-high Tõrvajõgi Waterfall is located here. 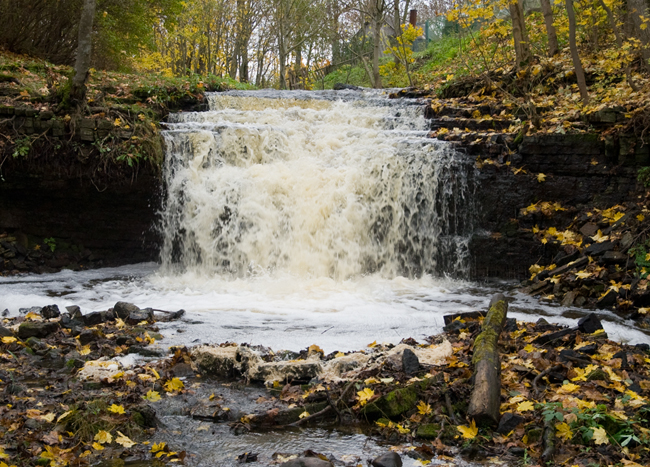 Hoovi Klint Island (diameter app. 400 m) lies app. 0.5 km north of Tallinn-Narva Highway at Peeterristi crossroad. It is separated from the remaining klint plateau by a narrow (app. 100 m) and about 10-m-deep saddle, which penetrates down to the phosphorite complex. The limestone plateau of the convex-shaped klint island lies at 25–31 m asl. The spring emanating from the western slope of the klint island is believed to be sacred.

Narva Rafts (Klint Islands) are four gigantic (circumference up to 0.5 km) limestone covered blocks (Pähklimägi, Veskimägi, Kuningamägi and Väikemägi) at the northwestern border of Narva Town (Pähklimägi District). The limestone plateaus of the biggest of the rafts – Pähklimägi and Veskimägi – are 10–20o inclined southwestward. 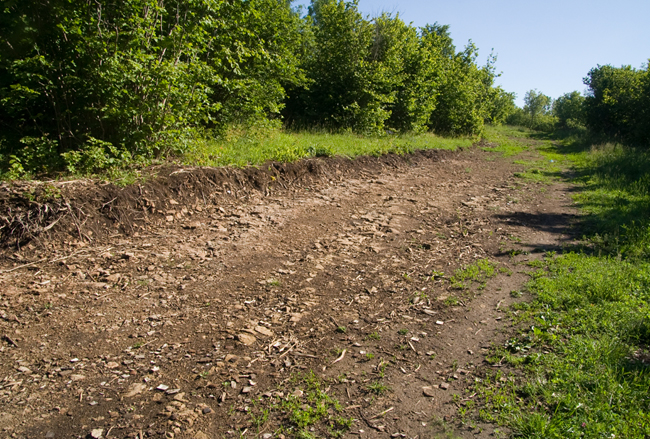 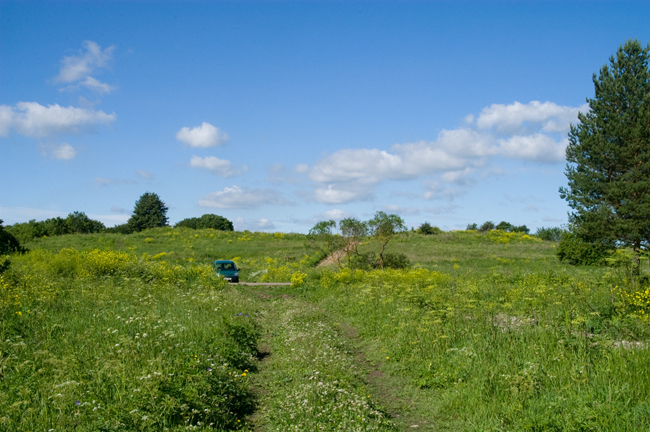 68. Narva Klint Valley cuts into the klint plateau (app. 25 m asl) with a nearly 2-km-long, 200–300-m-wide and up to 20-m-deep canyon. At the end of the klint valley, on both sides of the up to 800-m-long and up to 200-m-wide Kreenholm Island, there are up to 6.5-m-high waterfall escarpments. Over these and several other, lower escarpments, the river drops by app. 10 m in an about 0.5-km distance. Narva means “waterfall” in the Veps language and it is largely the waterfall that Narva, which was granted city rights by the Danish King Valdemar IV in 1345, owes its existence to.

The Narva River Valley and its banks are rich in various significant landscape and cultural-historical features: waterfall and canyon; Hermann and Ivangorod (Jaanilinn) Fortresses on the western and eastern banks of the river symbolizing the centuries-long opposition between the East and the West, between Europe and Russia; bastions built for the defence of the Narva Fortress in the 17th century; battlefields of the famous Battle for Narva in the Great Northern War; Middle Stone Age settlement sites of the Narva Culture at Joaoru and Siivertsi; historical industrial buildings (Georgi, Joala, old weaving and spinning factory on Kreenholm Island); Narva Power Plant, etc.The Narva Klint Valley constitutes the end of the North Estonian Klint: across the river and the national border there is already the Ingrian Klint. 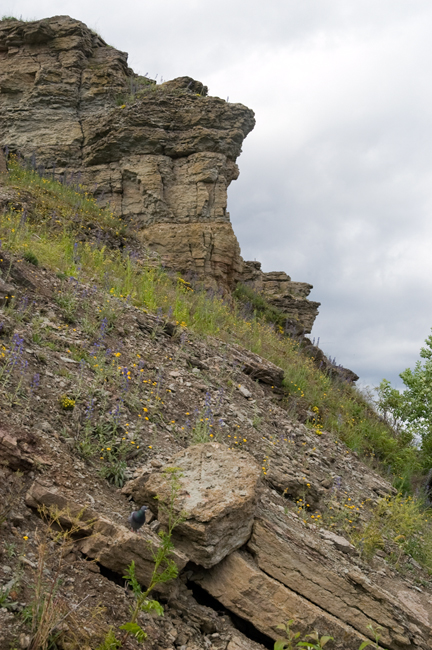 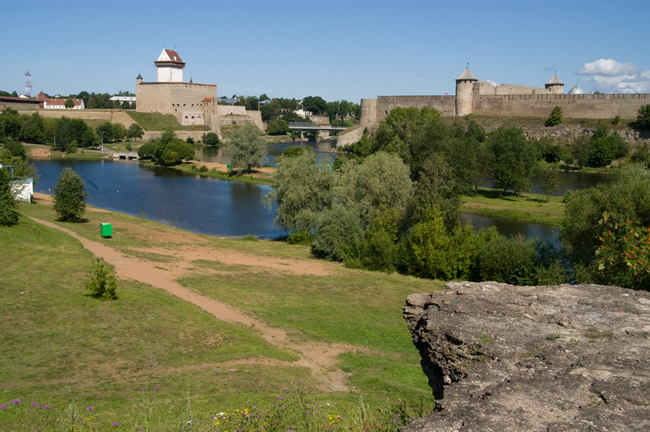 Hermann (left) and Jaanilinn (Ivangorod) (right) Fortresses on the western and eastern banks of the Narva River. 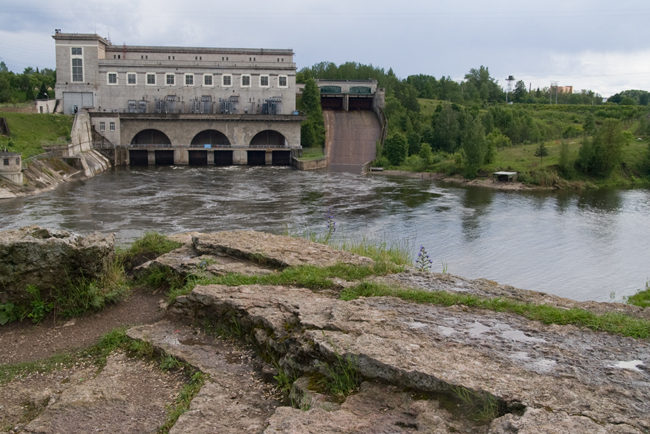 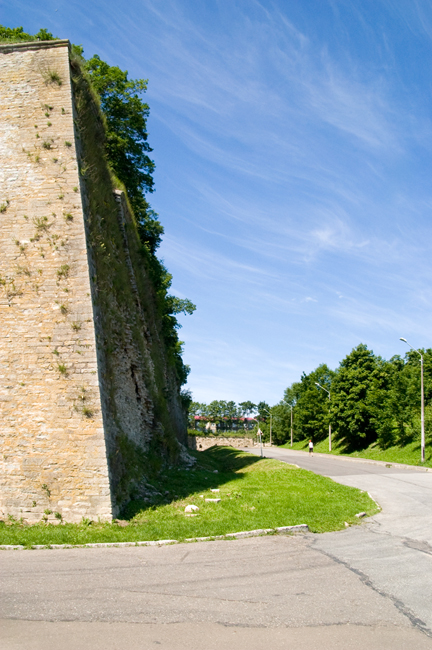 The bastions of the Narva Fortress are breaked in the Klint.