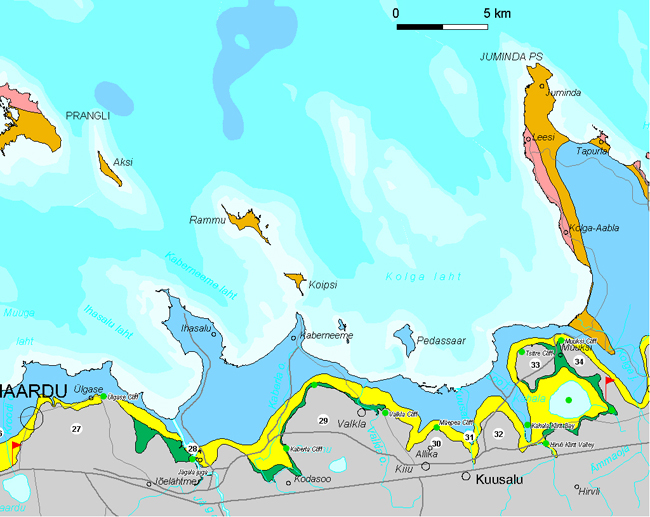 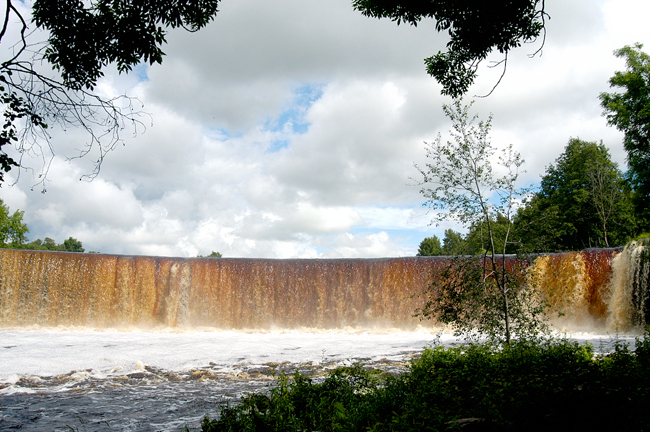 27. Kallavere Klint Peninsula protrudes up to 8 km long and up to 8 km wide northward in the area between the Kroodi and Jägala Valleys. The up to 25-m-high escarpment bordering the klint peninsula in the north is indented by several shallow (up to 10 m) flat-bottom klint bays (east of Kallavere, at Manniva and north of Jõelähtme). Also a Cambrian II escarpment abraded into the blue clay complex  begins to differentiate gradually at west of Ülgase.

A big area of the Kallavere Klint Peninsula is covered with dumps from phosphorite mining (1965–1988). Phosphorite mining began in these areas in the 1920ies. A new Tallinn Landfill fully conforming to today’s requirements was opened in 2003 in the dumping area, app. 1 km south of Ülgase.

Extensive areas in the south of the klint peninsula are covered with open alvar. This is the area of the subterranean Jõelähtme River, remarkable karst forms (Kostivere) and abundant archaeological and historical monuments of various kinds (ancient fields of Rebala, Jõelähtme Barrow Field, cupstones).

28. Jägala Klint Bay cuts 2–3 km wide into the limestone plateau in northwest-southeasterly direction at south of Jõesuu Bay and continues as a valley cut 10–15 m deep into Cambrian sandstones-clays. The Jägala River descends into the valley from the limestone plateau over a 8-m-high and up to 60-m-wide waterfall. At the mouth of the canyon, the river receives the Jõelähtme River, which has a nearly 1-km-long and up to 14-m-deep canyon and some ten limestone escarpments. At Linnamägi Fort Hill, which was the centre of this area in the 1st millennium BC, the river is blocked by the 10-m-high dam of Linnamäe Hydropower Station (built in 1924 and reconstructed in 2002).

Ruu Klint Cape (app. 2 km2), whose limestone plateau lies evenly at the altitude of 32–33 m asl, arches nearly 1.5 km from the klint line at east of Jägala Klint Bay. The klint cape is bordered in the north by a 10–15-m-high flattened escarpment, which is partly buried under blown sand. 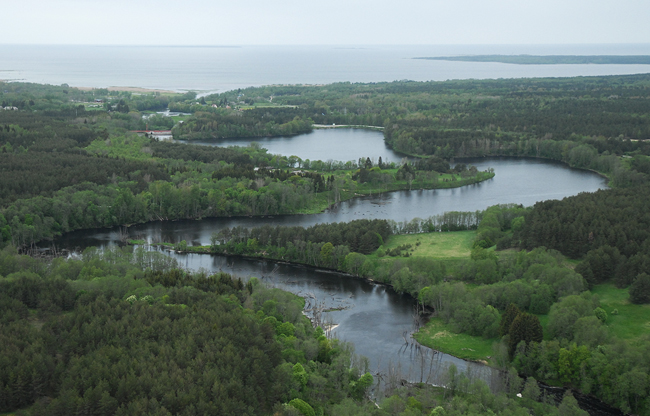 29. Kaberla–Valkla Klint Peninsula projects up to 5 km long and up to 6 km wide in northerly direction between Kodasoo and Kiiu Klint Bays. The 35–40 m asl limestone plateau of the klint peninsula exposes Ordovician limestones. The klint peninsula is bordered in the north for nearly 8 km with a 3-step escarpment, in which also the phosphorite complex differentiates in some stretches as an up to 6-m-high escarpment in addition to the Ordovician and Cambrian escarpment. The inn of Valkla together with a stone bridge (18th century) is protected as an architectural monument. At the crossroads near the bridge lies a memorial stone commemorating the place where the offensive of Russians was stopped during the War for Independence (January 1919).

Kiiu Klint Bay is mostly buried and penetrates nearly 2 km into the North Estonian Limestone Plateau in northeast-southwesterly direction at east of Valkla Village. The western coast of Kiiu Klint Bay is traceable in the topography as an up to 5-m-high, rather gentle-sloping escarpment. 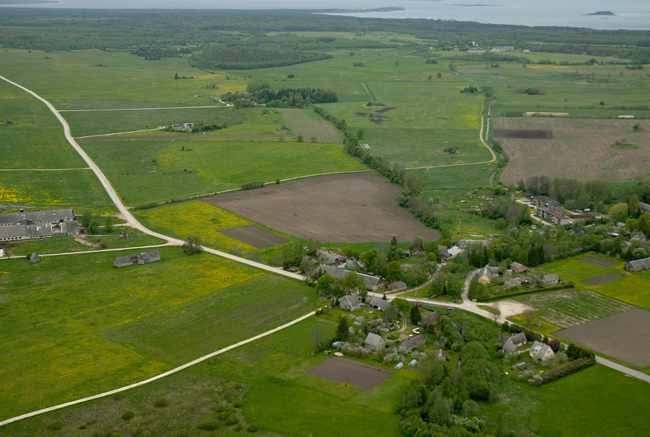 30. Määpea Klint Peninsula (app.1 km2) protrudes nearly 1.5 km from the klint line in the area between Kiiu and Kuusalu Klint Bays. The limestone plateau of the klint peninsula lies at 35–38 m asl. The klint peninsula is bordered in the north by an up to 10-m-high escarpment, which is partly buried and somewhat flattened but still rather well traceable in places (Määpea Village). 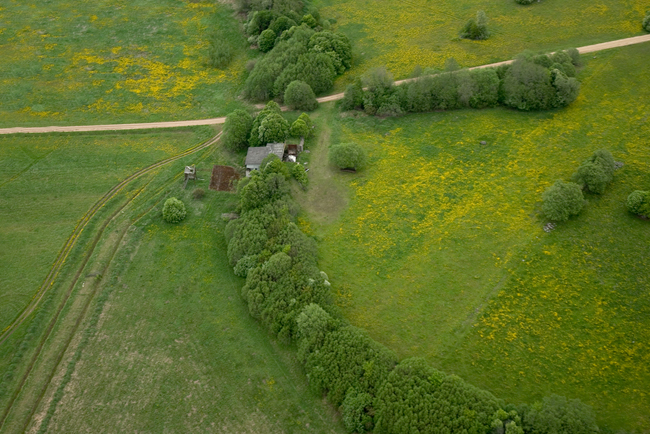 31. Kuusalu Klint Bay, nearly 2 km wide at mouth, is largely buried and runs toward Kuusalu Village between Määpea and Sõitme Klint Peninsulas. In the vicinity of Allika Farm it narrows sharply and becomes poorly traceable. Kuusalu Stream marks more or less the axis of the klint bay. The swampy area at the bottom end of Kuusalu Klint Bay (0.75 km north of Kuusalu Church) was a refuge of ancient Estonians – Pajulinn (“Willow Fort”) – in the 10th–11th century. 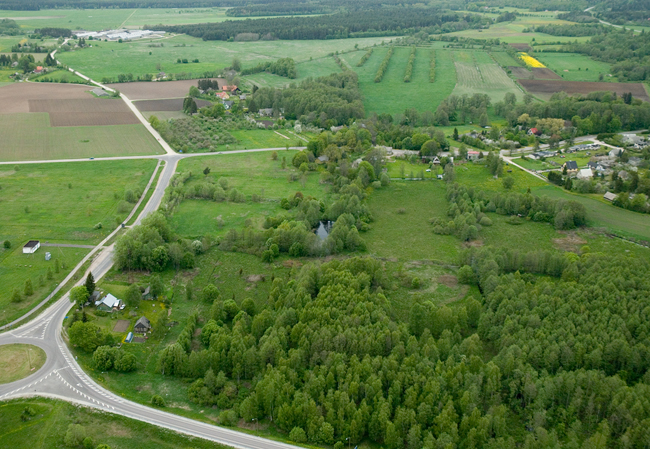 32. Sõitme Klint Peninsula (app. 4 km2) projects up to 2 km north between Kuusalu and Hirvli Klint Bays. It is bordered in the north by a 5–10 m high gentle-sloping, partly sand-buried escarpment. The limestone plateau of the klint peninsula lies at 34–42 m asl. The top of Sõitme Klint Peninsula is known as an ancient settlement area and contains numerous cupstones.

Kahala Klint Bay constitutes an eastward trending complex system of klint bays between Sõitme Klint Peninsula and Tsitre Klint Island. The eastern part of the klint bay encompasses the Lake Kahala Depression or Kahala Klint Bay. The bottom of the lake depression cuts into Cambrian sandstones. A big part of the lake depression is filled with a shallow lake – Lake Kahala (greatest depth 2.8 m, area 3.5 km2). The rather flat klint escarpment bordering the klint bay in the south has some smaller bay-like indentations near Kalamäe and Oldoja. Oldoja Klint Bay, up to 1 km wide at mouth, runs up to 1.5 km southeast from Oldoja. The buried Hirvli Klint Valley runs southeast toward Peterburi Road from the line of the Loo River.

The banks of Lake Kahala have an ancient history: people have lived here and cultivated the land for nearly 3000 years already. This is evidenced by numerous cupstones and stone barrows on the neighbouring alvars. 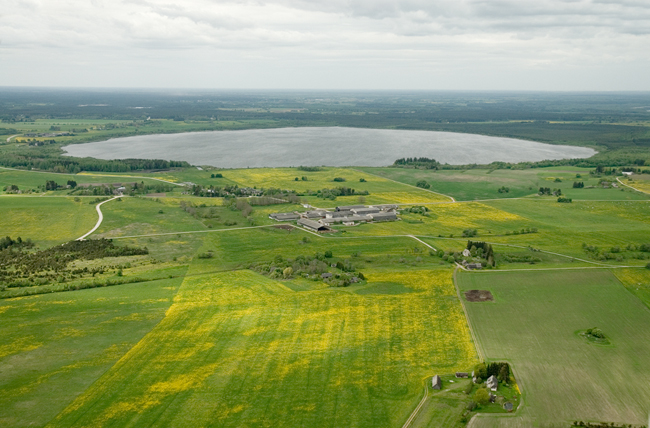 Lake Kahala is located above the Kahala Klint Bay.

33. Tsitre Klint Island (app. 3 km2) constitutes an up to 2-km-diameter ring-shaped limestone plateau lying at 42–46 m asl and separated from the remaining North Estonian Klint Plateau by Kahala Klint Bay (in the south) and the nearly 400-m-wide and 1.5-km-long Muuksi Klint Stream (in the east). The klint island is bordered in the north for nearly 3 km with a 25-m-high Cambrian-Ordovician escarpment. In the east and south of the klint island the escarpments are gentler-sloping and more deeply buried.

The northern edge of the klint island is deeply incised in its central part by Turjekeldri Stream, which drops over the same-named waterfall with an up to 6 m high sandstone escarpment and a short ravine. Both the stream and the waterfall have got their names after a cave named Turjekelder located under the waterfall escarpment. According to a legend, this was the Devil’s spirits cellar and pure vodka used to flow down the waterfall. 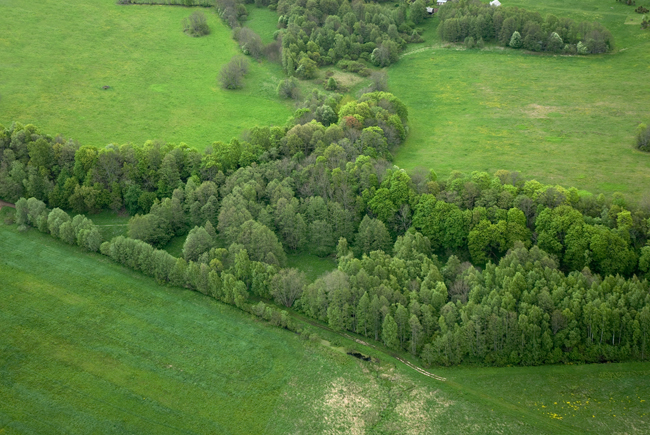